So another year draws to a close, following on from last year I have attempted to track my efforts over the past 12 months of the various projects that I had drawn up and the butterfly effect of shiny metal which was not planned for.


I am rather pleased with this years efforts, I beat last years new painted figure total by 33 figures and numerous vehicles due largely to a late resurgence in WW2 thanks to Rich Clarke and his Chain of Command Rules.

I set myself a personnel goal of clearing many of the older projects that had been partially finished or those projects waiting for that one blister pack to round off the various forces, on the whole I have managed to achieve this and kept away from new projects although its been a year of revisting old projects.
Russo Japanese War - 28mm
With the bulk of  Infantry completed last year, I was looking to bolster the Cavalary arm for both sides, I fancied building a trench system for the Russians to perhaps recreate some of the engagements around Port Arthur and building up the Artillery for both sides. 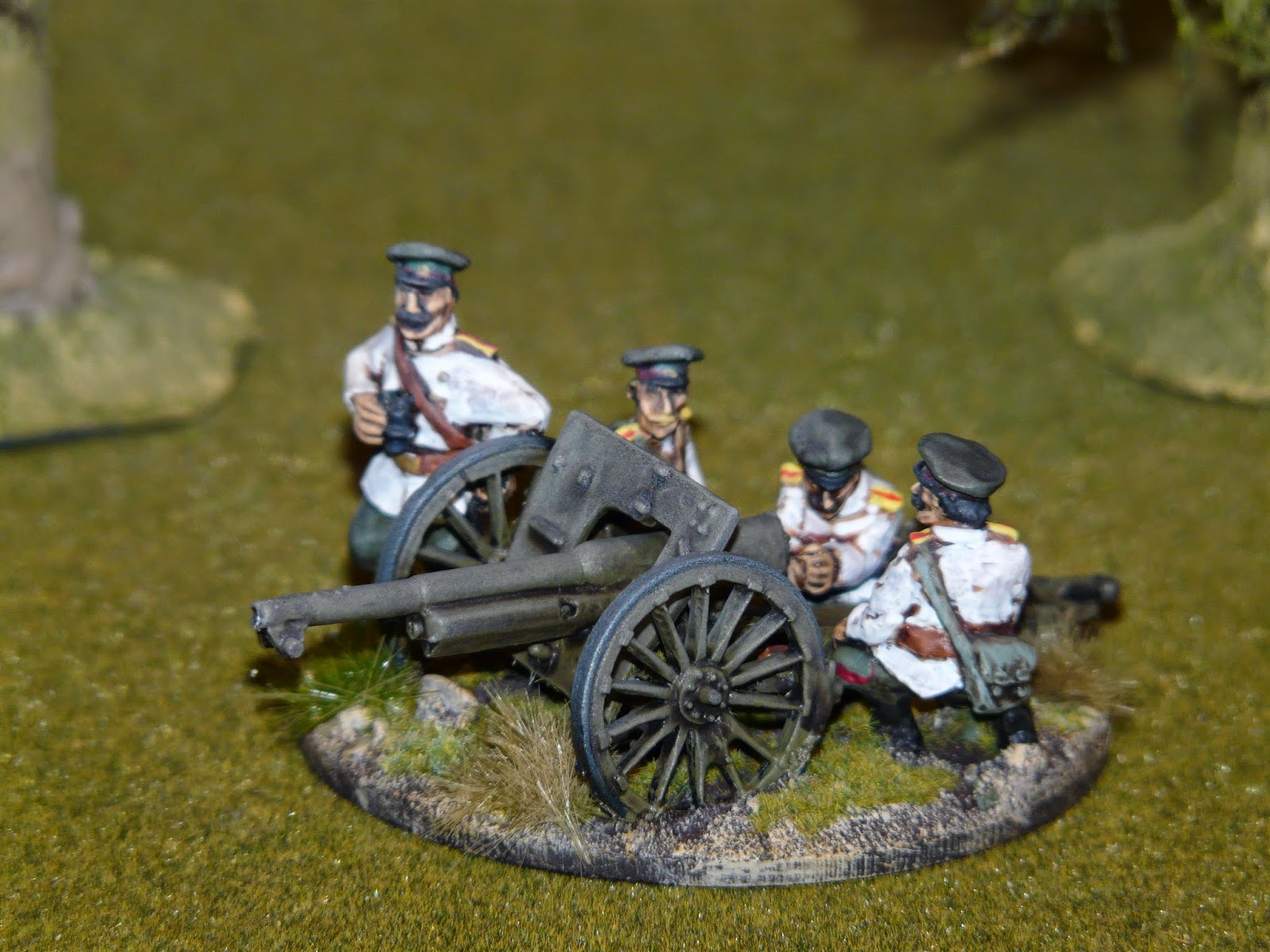 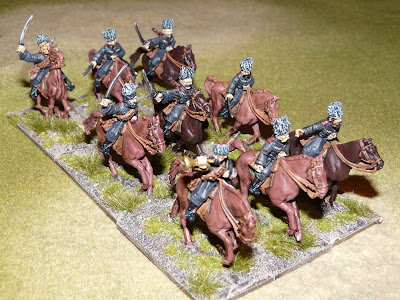 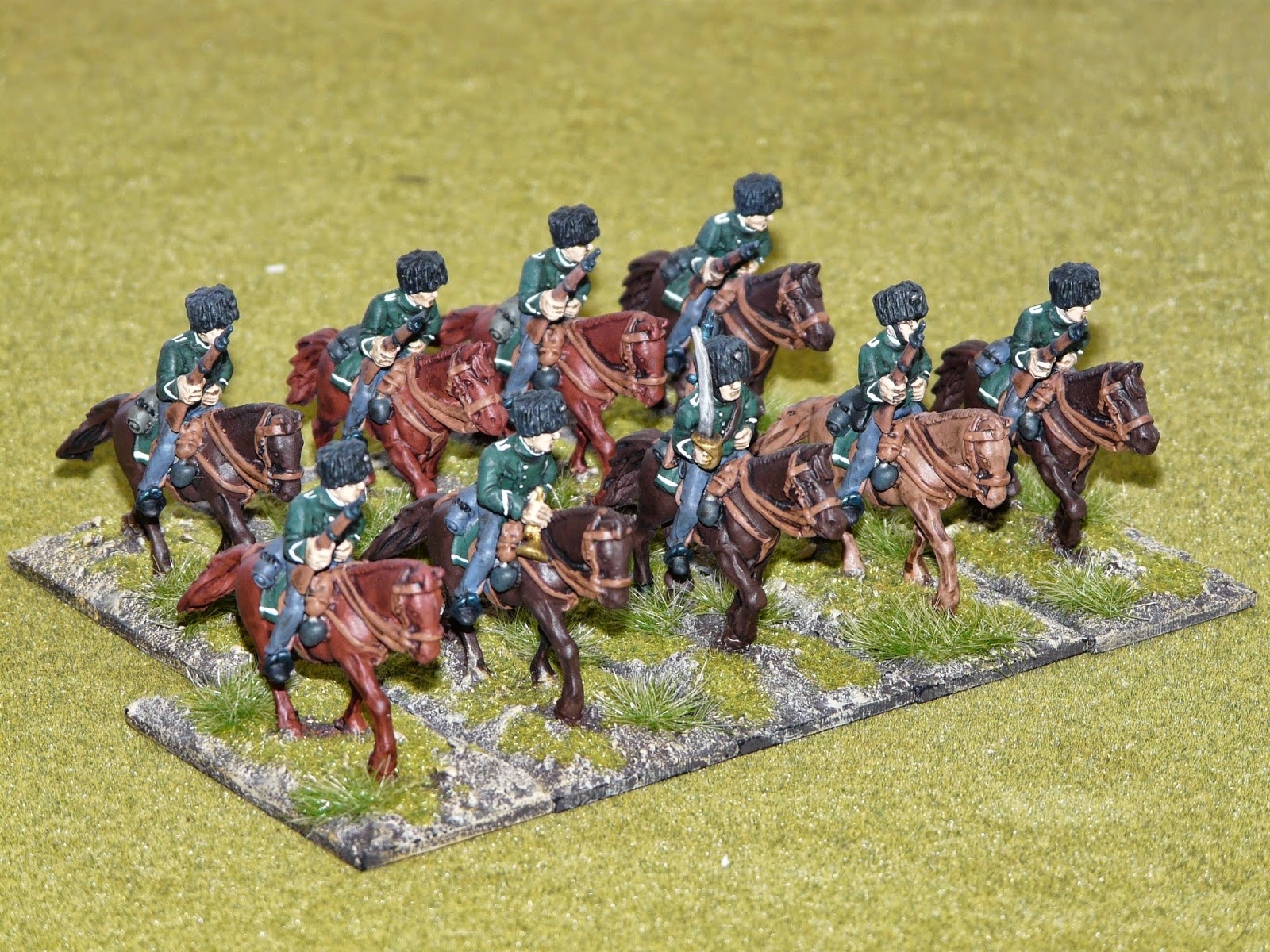 I made some in roads into this with additional cavalry for the Russians and a solitary artillery peice from Tiger Miniatures, most of the Russians are proxies as their is a storage of RJW cavalry available.
I manged to complete the various "spares" creating more shock markers and low ammo counters.
2015 is looking like another good year for the RJW project, Tsuba Miniatures are looking to release their Japanese Cavalry in early 2015, so the Japanese should receive some reinforcements. I have found a suitable manufacturer for Chinese Buildings which will fit this project and another set in China (more of that later.)

All Quiet on the Martian Front.

Having signed up for the Kickstarter project, I was expecting to add flying Martians and Drone infantry to the Alien forces, however the kickstarter has been a real disapointment, starter packs are out but no sign of the new toys...... Regular consumers get to pre-order the new stuff.
How about supplying those who back you in the first place!!!!!!

The rules are still sitting on the shelf unplayed.
I did finish some additional enplacements and civilians to be protected.
I hope the AQOMF team get their act together in 2015 and we can see some War of the Worlds action real soon. 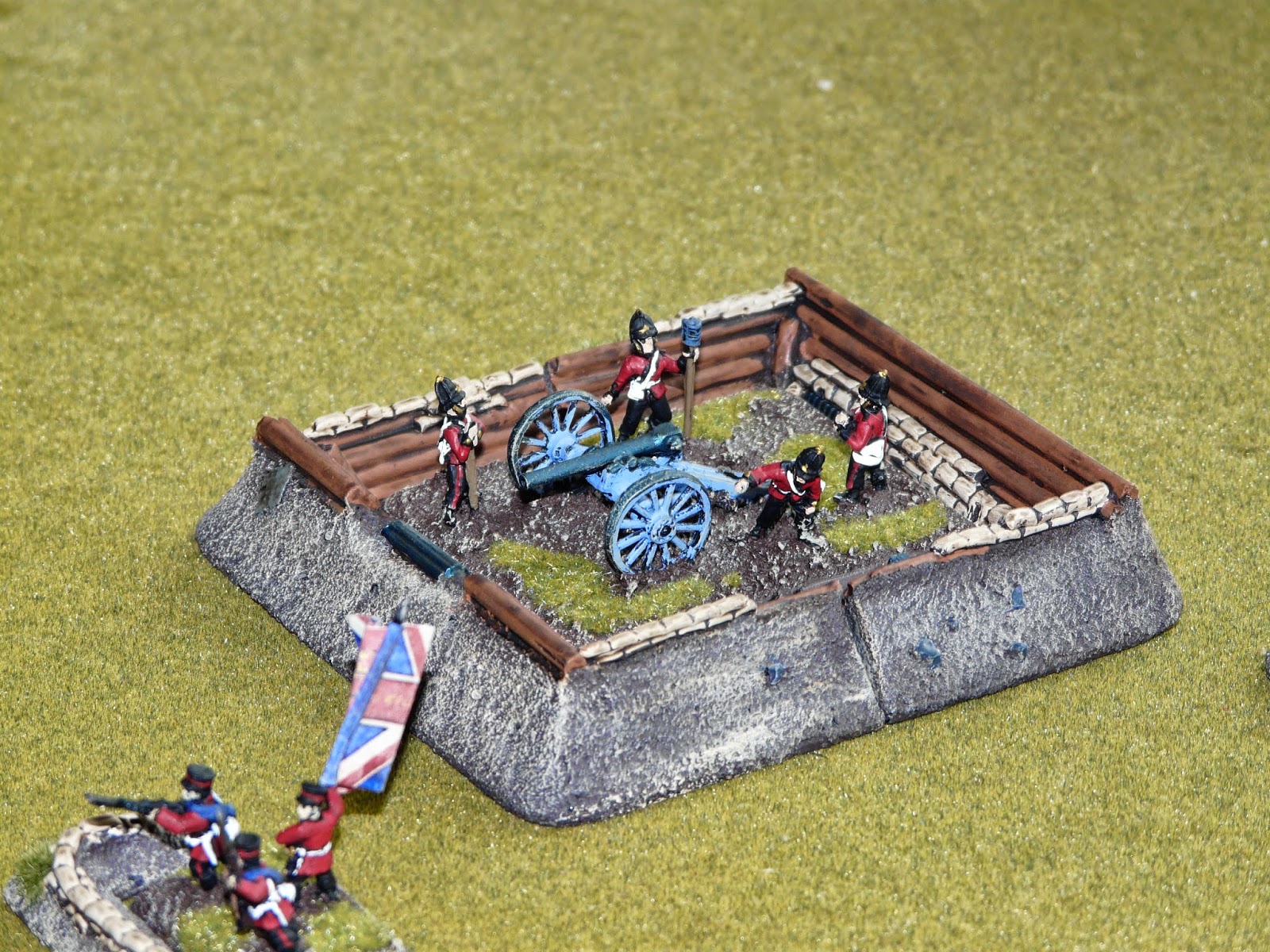 November finally saw the Russian Armour and Infantry roll off the paint table, a larger number of these had been sitting in the "to do" box for about 5 years when I dabbled with Panzer Grenadier, but with most of the Wyverns having caught the Chain of Command bug, it gave me the push that was needed to get these finished.
They have yet to win a game yet, but just like their real life counter parts, we are just absorbing the hammer blows at the moment before the big offensive. 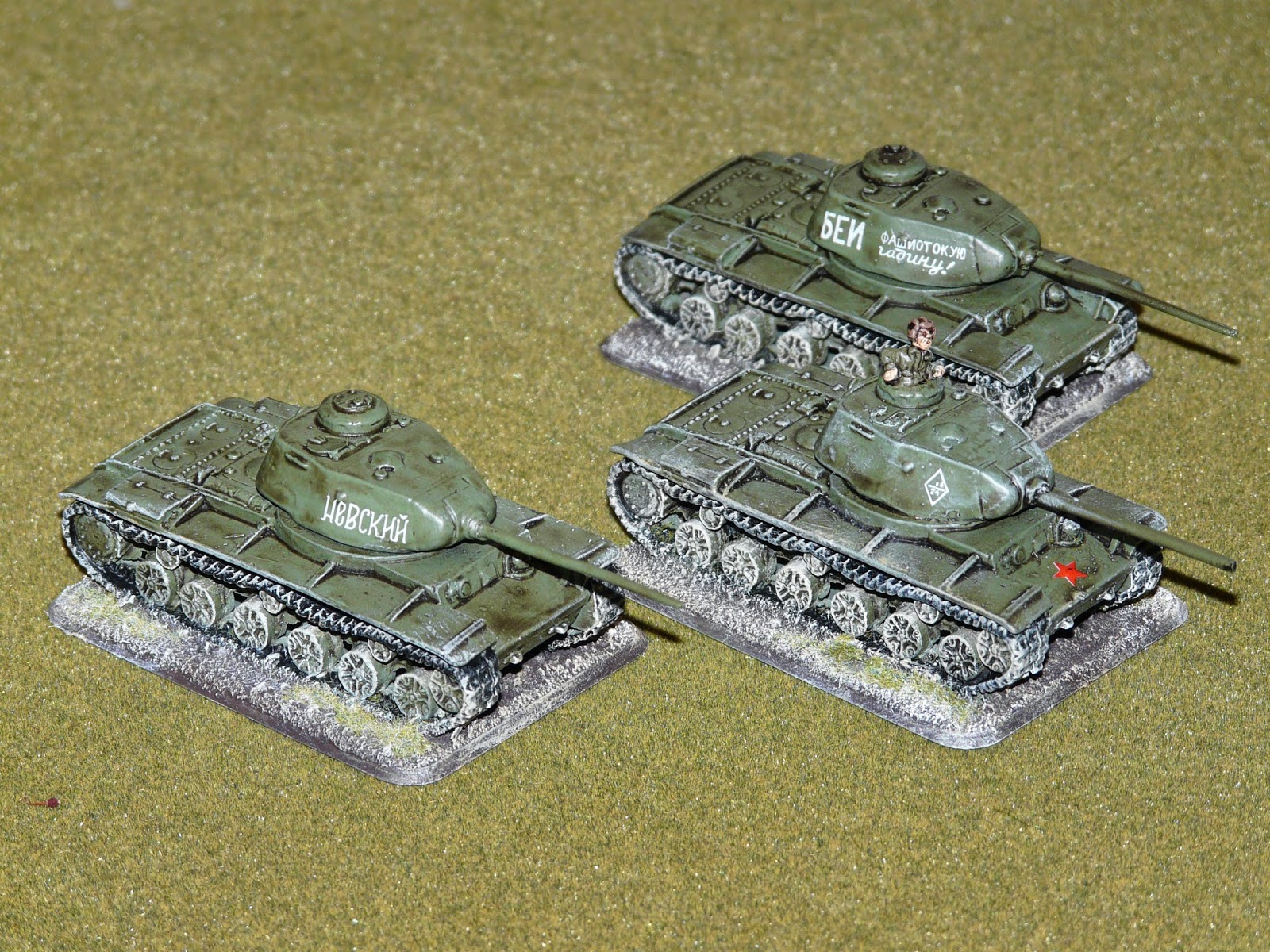 At the time of posting the last of the support elements for both the Russians and Germans are drying, which means that I have painted everything languishing in the to do draw.

I have plans for 2015 to create a wintery board with buildings for Berlin and the Seelow heights refighting the last months of WW2. Fieldworks have some great buildings which are on the want list, I dare say some eatra armour may well apear as the Chain of Command games get ever bigger.

Elizabethan Irish Wars 28mm
Despite plans to expand the English with Pike Blocks and Cavalary I made no progress on this, I based up a couple of pieces but the project was over taken by others. With TAG likely to be producing Irish in the next year these might see some traction, a January sale at Foundry might prompt me to fill the ranks.

African Wars
I Did not envisage getting back into this.
That was until the Wyverns put on a game at Salute and the guys at Spectre showcased some of their African militia from a forthcoming Kickstarter. The complete opposite of the AQOMF great communication and delivered within a year.

Whilst waiting for the Spectre stuff to arrive, I gave the existing militia a make over and completed the backlog that had been sitting dormant for a number of years, this included, the UN, special forces, guns for higher and a film crew..... 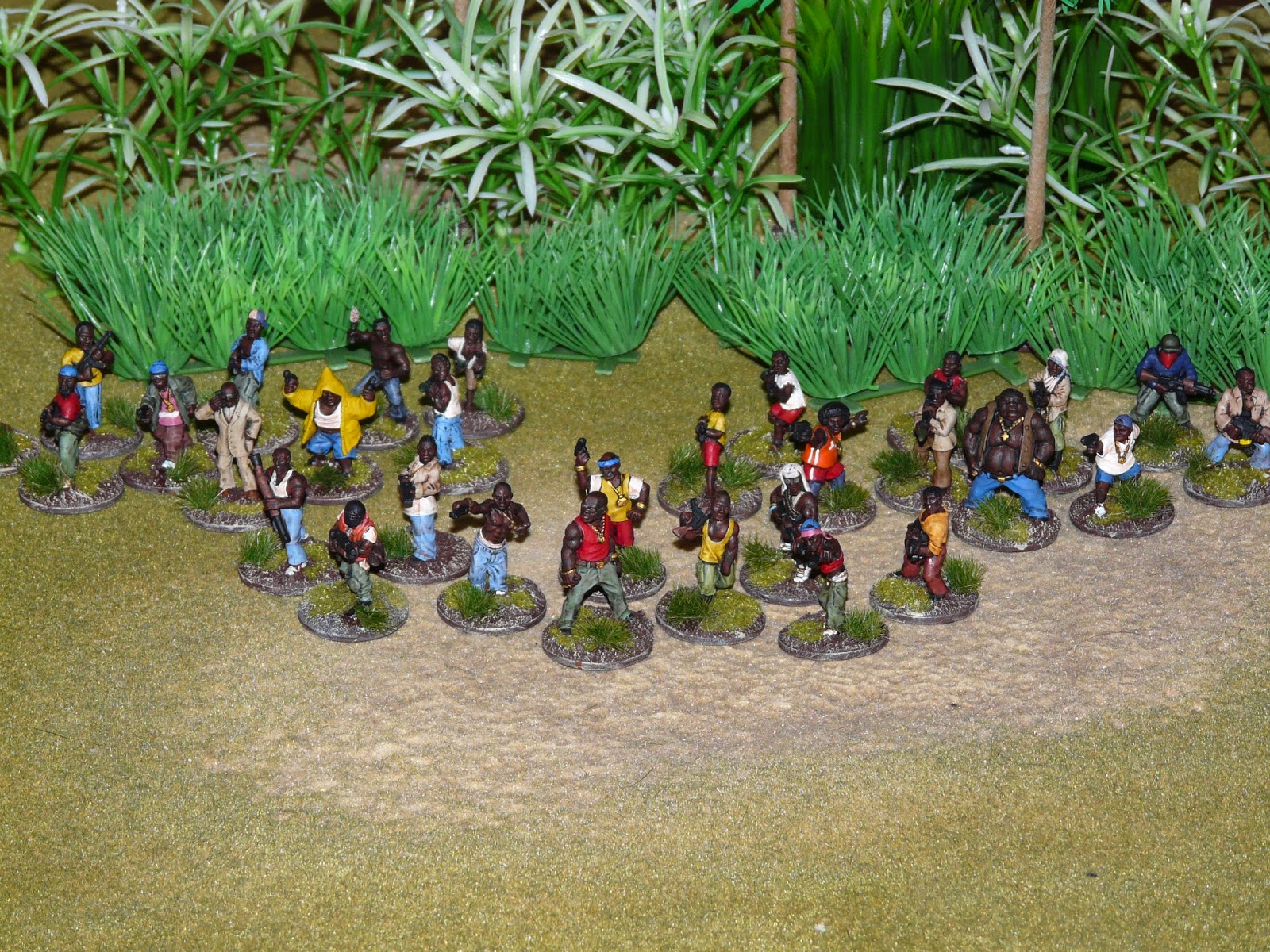 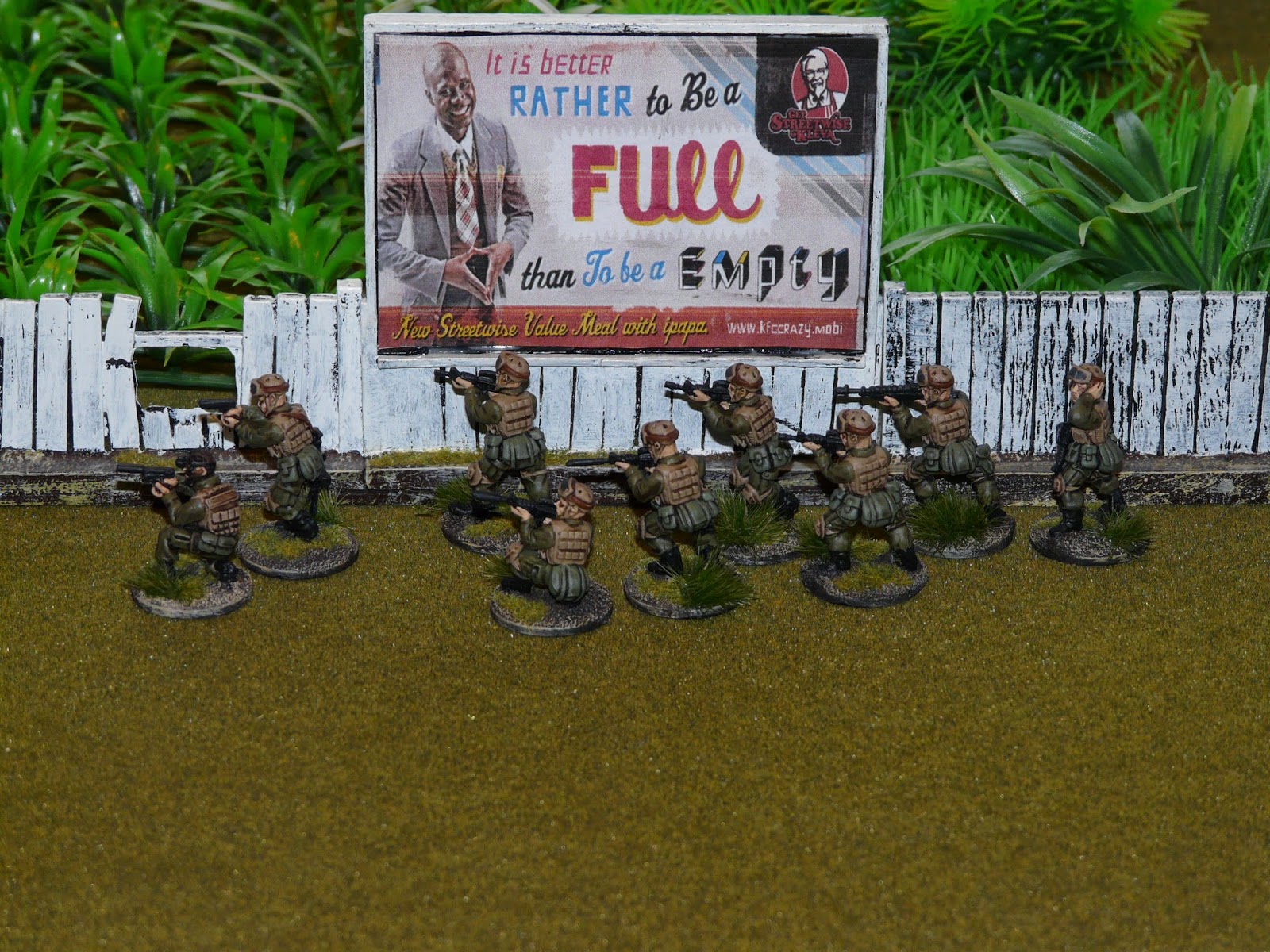 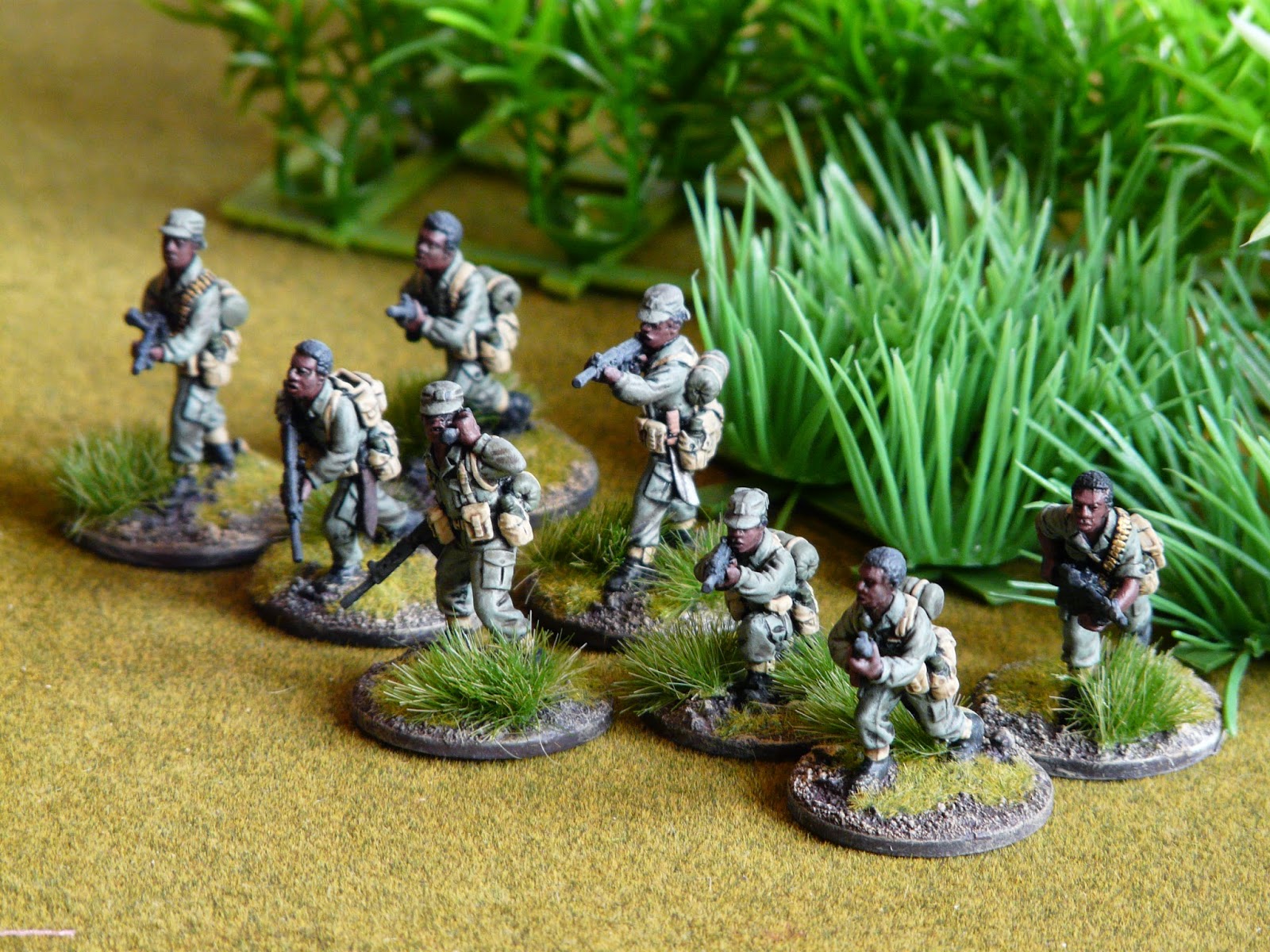 With more Spectre offerings in the wings, Eureka expanding their bush war range and some great vehicles becoming available, Zikinga could becoming increasing hot in 2015.

Starship Troopers 28mm
Another project complete in 2014 back in January these had been sitting under coated and based but hidden in a draw for 18 months, I just needed a spark to get them done - so what better way than creating a campaign at the club.

I surprised myself with my output, additional bugs and Infantry, vehicles and buildings, together with bug holes and rocks.... It's fair to say half the fun was finding proxies for the stuff from the movies and cartoon series. 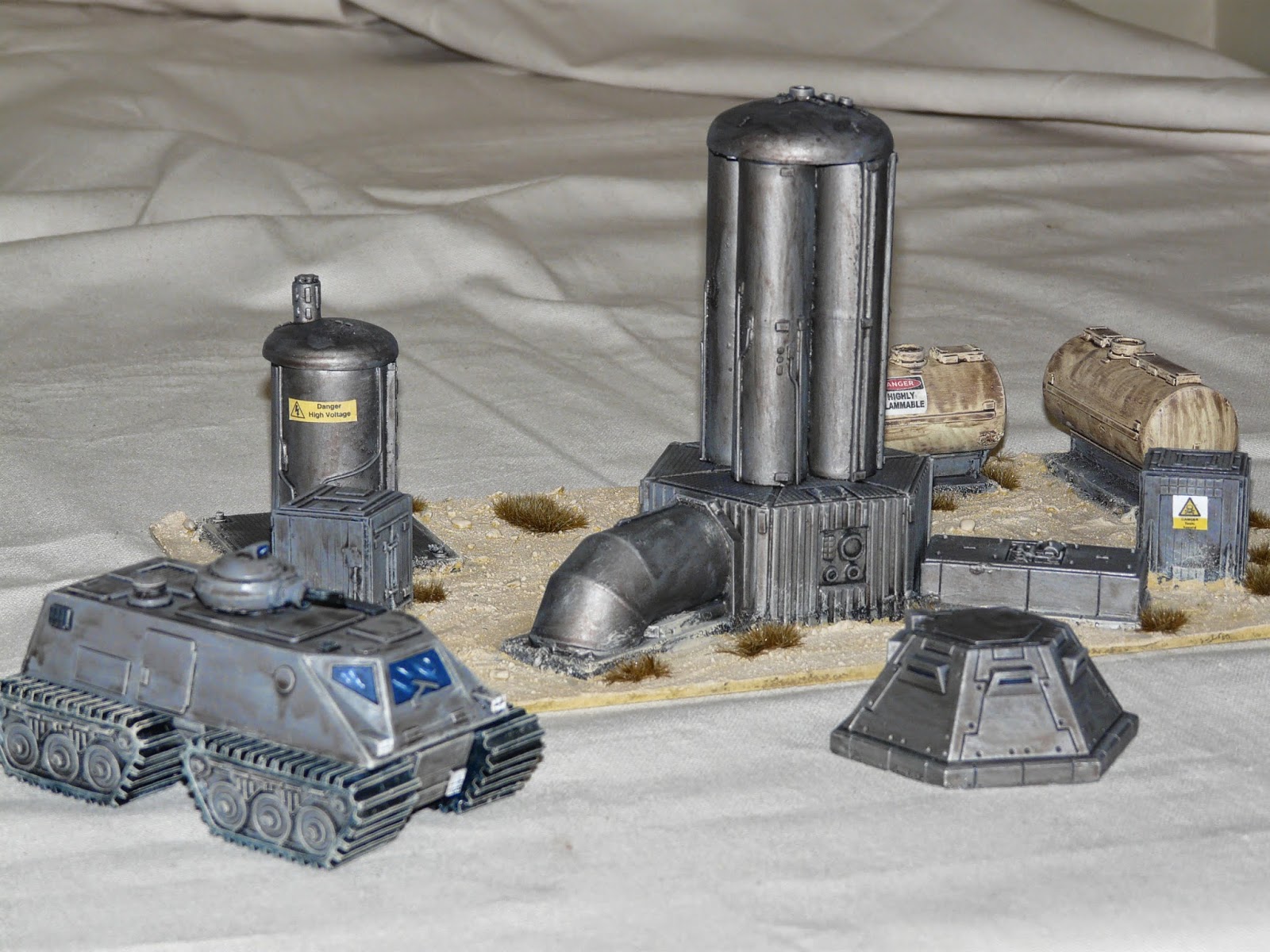 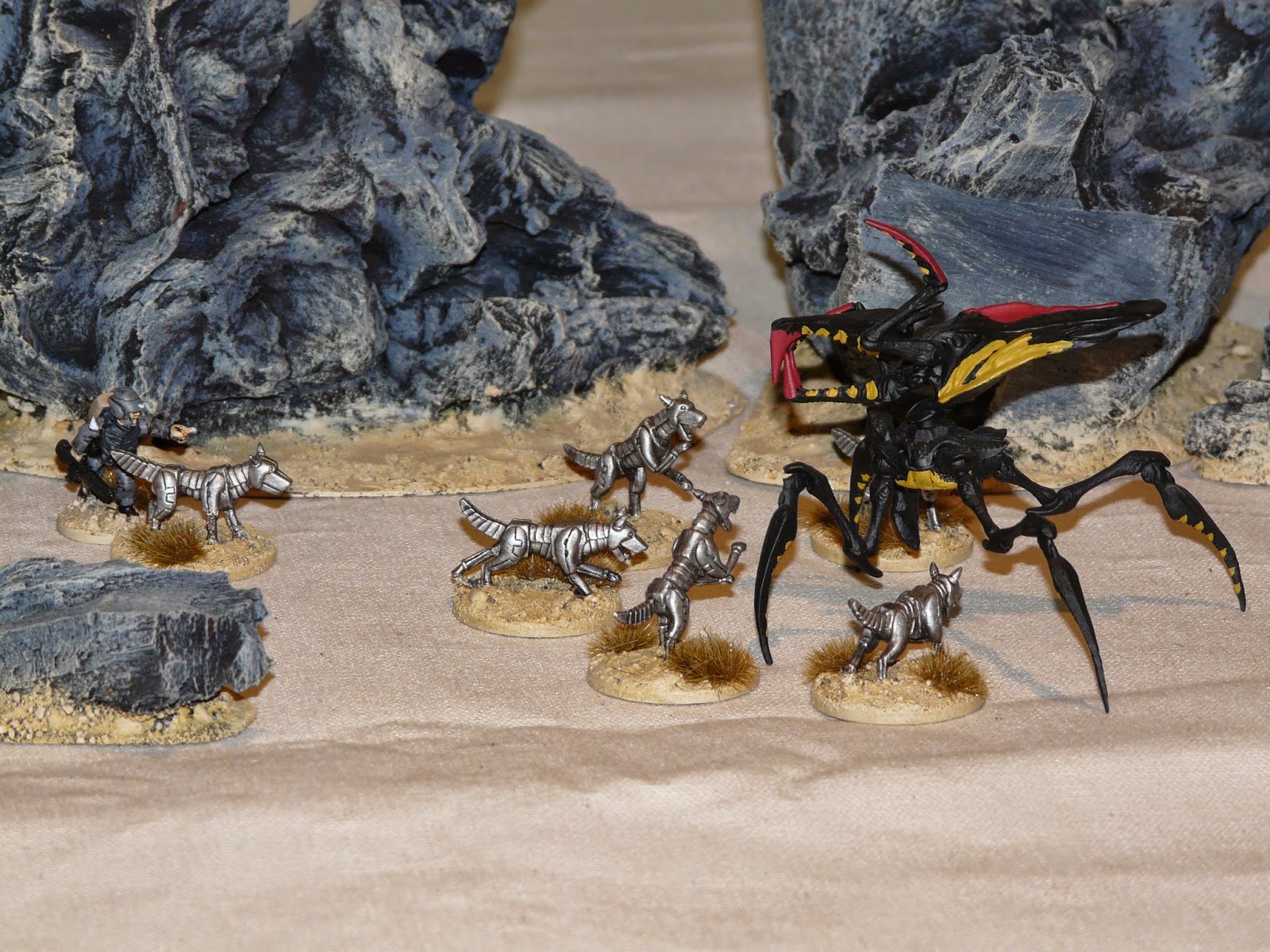 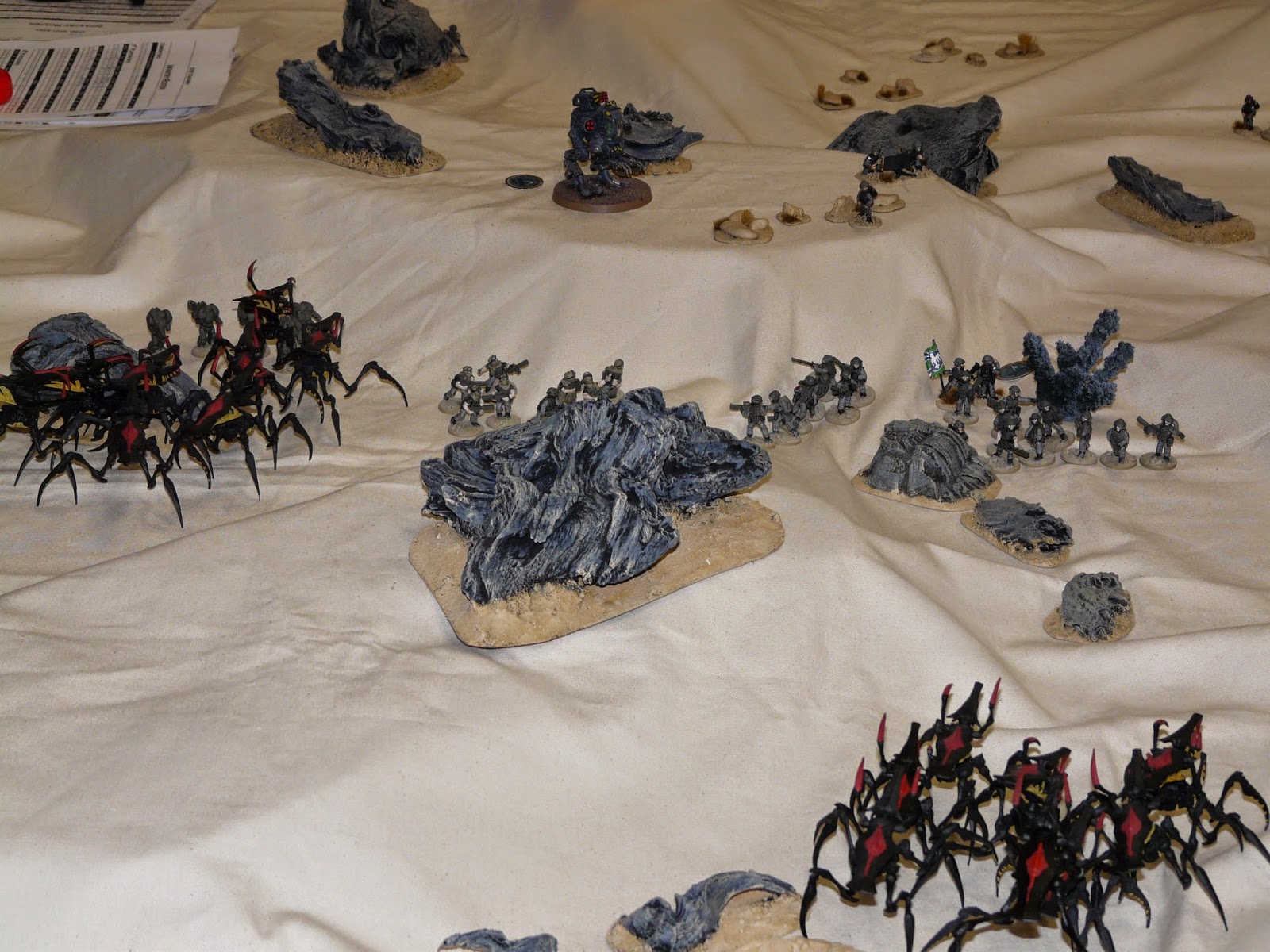 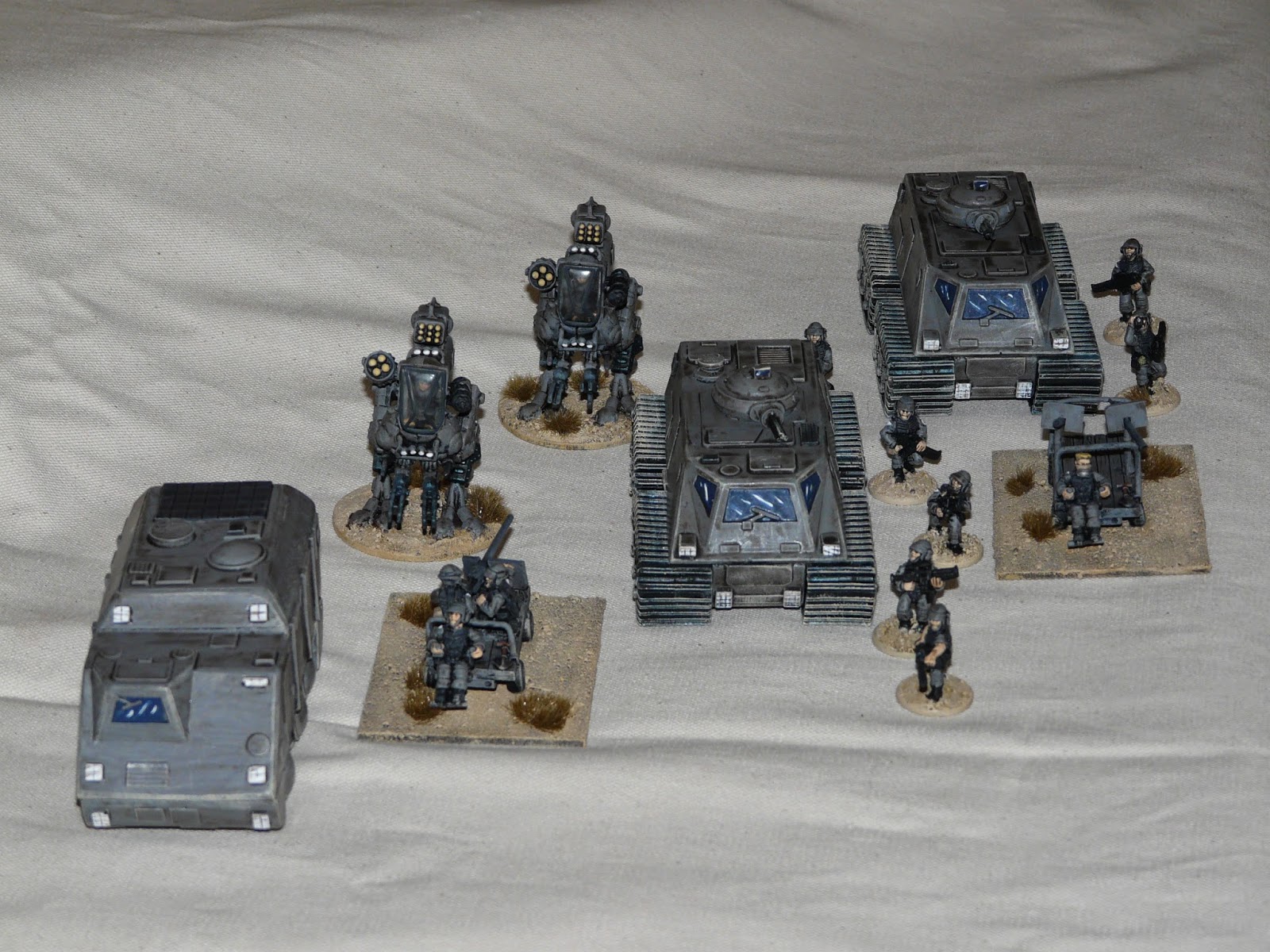 It's been a while since we had a full club game, so perhaps February will see the SST's once more take on the bug threat......

So what of the plans for 2015?
Well aside from the expanison plans above the US Marine and Japanese are crying out for conversion to CoC, I have completed the shock markers already, but need to expand the support elements to give both sides some additional options.

We have a major club project planned for the SCW, with a large number of players gathering their forces, my Nationalist forces are currently under going head swap surgery before hitting the paint table in January.

And then there is the as yet unnamed project, for those that know me and regular readers of this blog you will know that I am often tempted by stuff a little bit off the beaten path, I have been reading the rules  Song of Blades and Heroes recently and have plans afoot to use these for a skirmish type affair in the coming months..... I little something from the 80's....