All work and no play.

Hobby time has been rather thin on the ground in recent weeks.
A new job some two hours closer to home should have given me plenty of time to get in front of the brushes, but intense home work and manual reading put paid to any free time in the evenings, hopefully the next month should see things calm down.

I did manage to sneak a trip down to Warfare last weekend and joined the rest of the Wyverns in a refight of Cambrai 1917, using Paul @ Kallistra's excellent hex terrain and figures.

The British out numbering the Germans 3:1 and supported by 30 Tanks attempted to break three lines of German trenches. 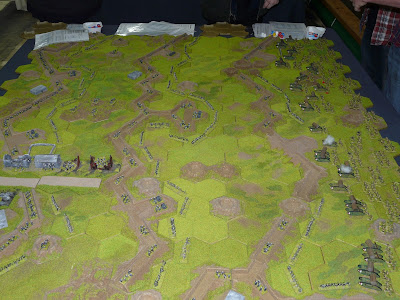 As one of the German commanders we opted to leave the first trench line lightly defended hoping to draw the British in where they would lose a number of tanks in attempting to cross the trench lines with the occasional grenade attack from the infantry defenders. 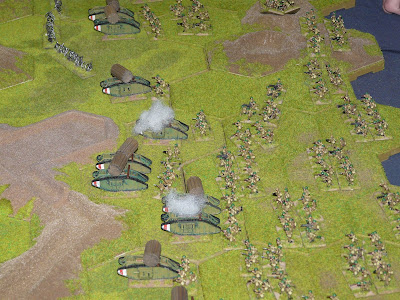 In a bloody affair in which the British opened up a number of channels through the use of concentrated artillery they flanked the German left but could not capitalise on the assault as they had lost all of their armour and around 60% of the infantry. 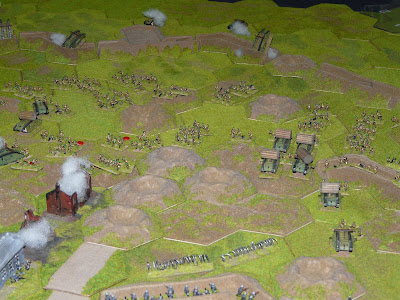 A drawn although the British were quickly on twitter to celebrate a victory.

A great days gaming touch and go right to the last turn when the German Infantry managed to destroy the last 3 tanks with Grenades, what are the chances of rolling 3 12's in a row.

Purchases on the day were few, but with Christmas coming and limited paint time, probably not a bad thing, I picked up some extra items for Ghost Archipelago in the shape of a couple of swamps which need some extra's adding by way of grasses and reeds. I also picked up some lovely treasure pieces which will be great to fight over in the months ahead. 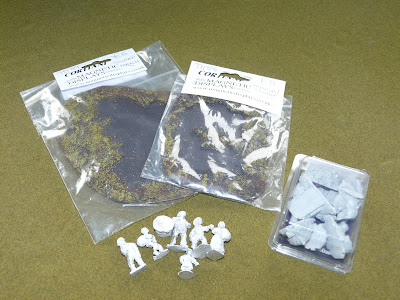 Redoubt had released their cotton pickers for the ACW, but they should be fine for the Haiti Project and some extra jump off points.

I have managed to prep the Crewman from the Ghost Archipelago Nickstarter, with 20 in a box, I opted for 10 European type characters and 10 Middle Eastern both gangs armed with a mixture of weapons, having given the Chinese a run out a few weeks ago, I figured three distinct factions could be formed for any one simply wanting to walk into the club without having to roll for all the stats from the outset. 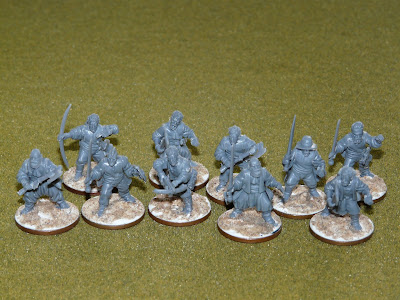 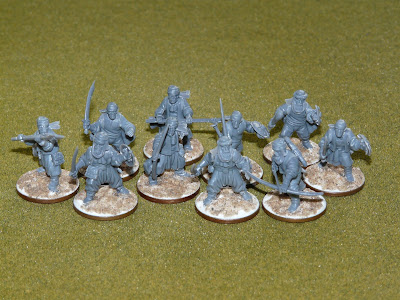 Just a short post today showcasing the first outing for Ghost Archipelago last sunday evening.
One of the great things about these rules is I have pretty much all that is required to put a game on, swamps, plastic plants and fish tank ornaments.
Whilst I work on putting suitable crews together Chinese and Romans stepped in to go treasure hunting. 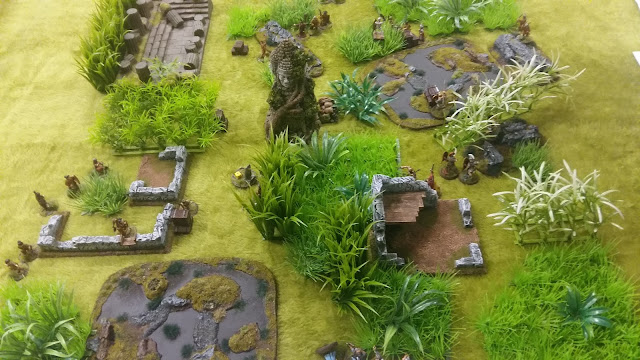 With 3 players on the board and the gaming area very small we were soon well into the action, the wandering monster element gave the game an extra dimension espically as we encountered one on every treasure pile. 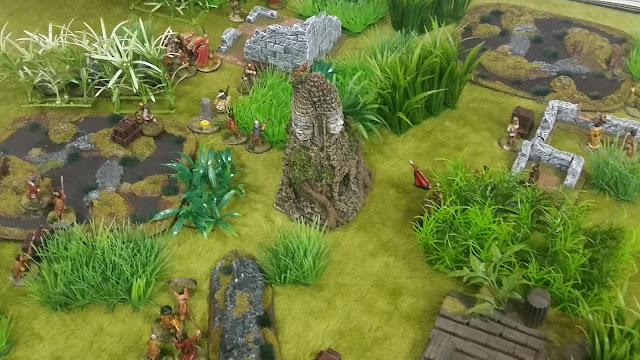 We made a couple of mistakes, half speed when carry treasure for starters but all in all very slick and as time goes on I can see a better use of the magic which for many of us in this case with restricted to enhancing firing and lightening bolts...

In case you are wondering The Roman's bagged the main treasure.... but also lost the most men in the after game wash up...

Following on from the last game which was a close call and saw the Haitian's fall back as their morale fell away as the support units were beaten and driven from the fight, this scenario sees the British push inland towards the fertile plantations, fearing they would be returned to slavery the Free Haitians make a stand. 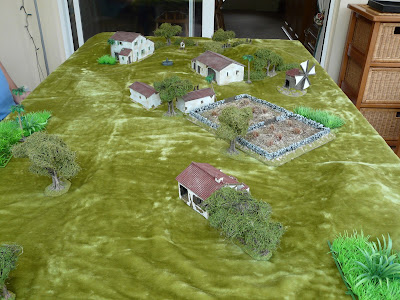 To win the game the British advancing from the bottom of the table must secure the deployment point at the far end of the table, clearing any defending forces that stand in their way. 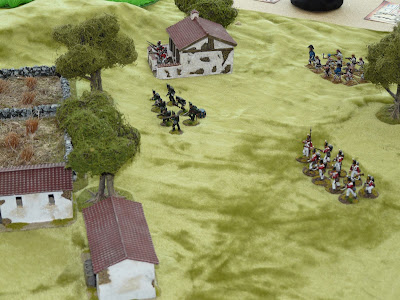 Once again my dice roll let me down and I was limited to a Force Morale of 8 whilst the Regular Brits had 10 points, I let the British force come on hoping to draw them in and pick them off once group at a time. 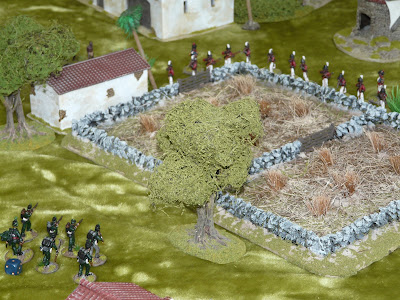 Rather quicker than I had hoped for Blunt of the 95th rushed towards the crop field, I could not afford to give up such a valuable position and deployed by skirmish troops to slow him down. The firing was rather poor but the number of troops looked rather scary. 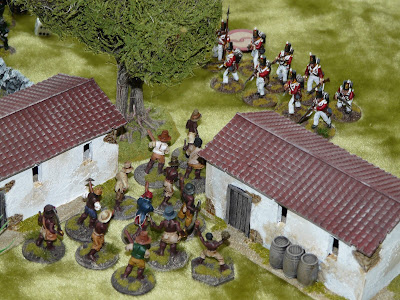 The British Regulars pushed forwards and I unleashed the first of my Wallahs armed with nothing but sticks, clubs and knives they rushed from their quarters to drive back the enemy. 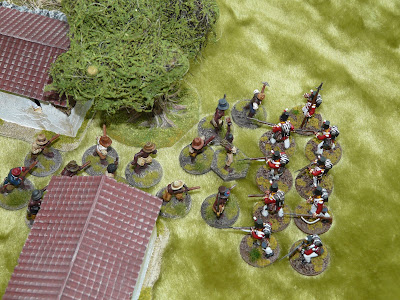 The slave army closes in, armed with Big Choppers they fight as clan in the first round, they gave the Brits a fright in the first encounter and my opponents looked nervous as they closed with the red coat detachment. 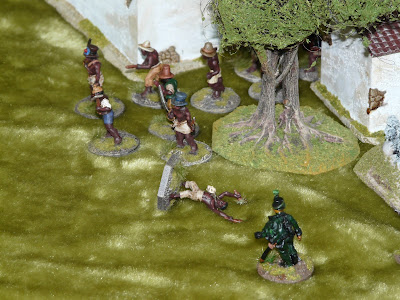 Victorious in melee, but victory came at a price, the Brits were driven back but Cpt Blunt fired into the flank of the cheering slaves and killed their leader, the force morale dropped down a level. 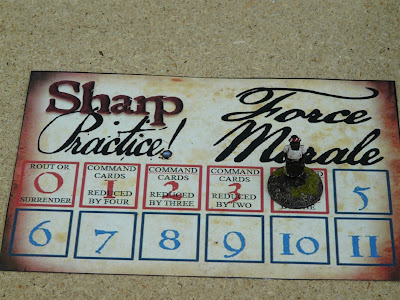 By now thanks to some terrible rolls on the force morale table and wounding of a number of Haitan leaders I was in danger of losing the game before any of the main forces were deployed. 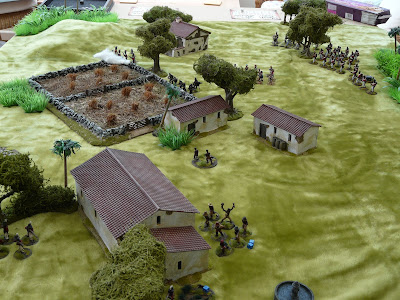 With shock mounting and my of the leaders at status zero, I order the light troops to fall back giving up the secondary deployment point and slave quarters to the cocky British who had limbered their gun and were now marching confidently forwards. 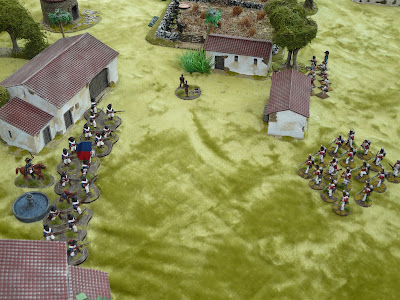 But it was a crafty rouse and as the British marched on in column the main Haitian force deployed and poured a crashing volley into the regulars marching towards the house and barn. The British stalled as shock started to mount. 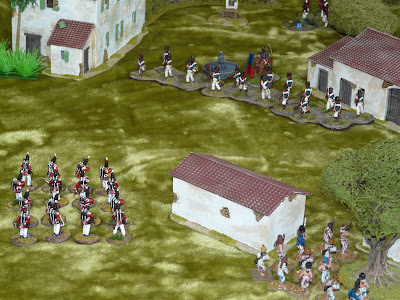 The Sailors having who had been soundly beaten in the first encounter moved forwards looking to repair their damaged reputation. 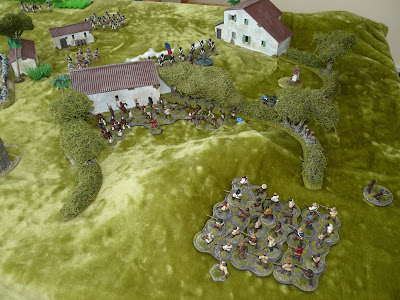 Meanwhile I knew any further losses would make it difficult to protect my already weak force morale, I deployed my remaining forces looking to drive the Brits from the table. 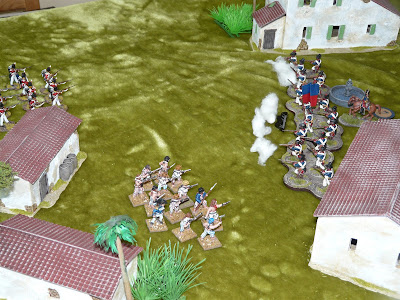 Having fired off their only controlled volley the Haitian Regulars struggled to reload as the sailors charged in, over running the secondary deployment point and heading straight for the unloaded infantry. 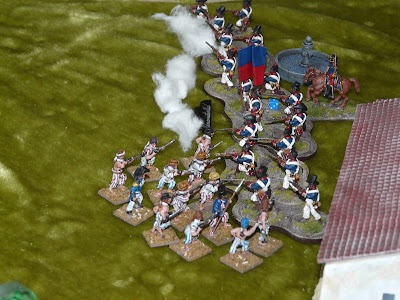 In an uneven affair the quality of the sailors and the lack of ready muskets drove the Freeman back, the Force Morale fell again. 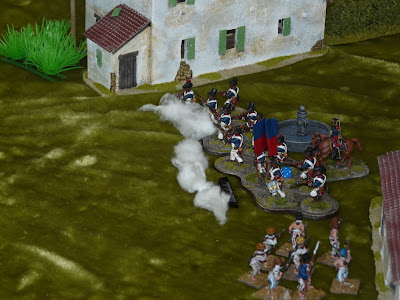 The Royal Navy pushed on crashing in to the flank of the remaining Infantry. 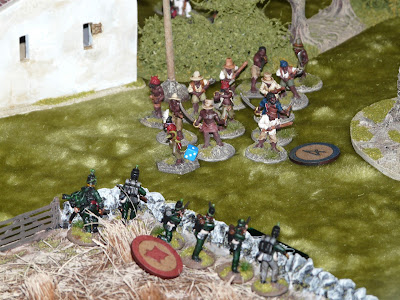 In an effort to distract my opponent I poured forwards hoping to bag Blunt, but the hero of the early skirmish took to his heels afraid of what the Big Choppers might do to him. 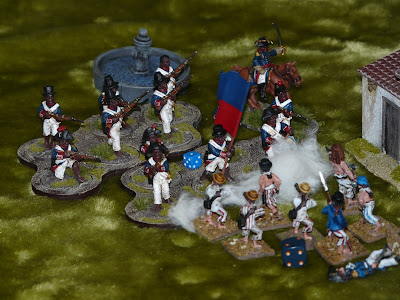 Even with Captain Lawnmower knocked to the ground, the Sailors pressed on looking to seize the Haitian colours. 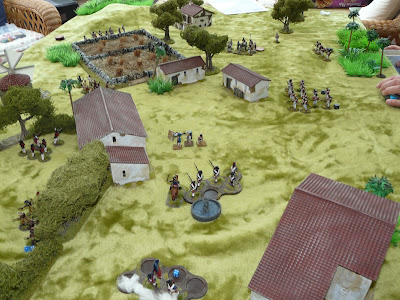 It was all over Major Deliveroo leader of the Haitian Forces was wounded, his troops broken and his force morale at zero left the table to the British.


Another British victory but a near run thing, the Haitians gave a good account of themselves but they need to be more careful and look to perhaps deploy on mass, as on both occasions the force morale has been seriously reduced before the main force can be brought to bear. The war has a very different feel to European Warfare. Perhaps next time a counter attack will drive the British back to the beach.
Posted by Stuart S at 18:28 10 comments: Links to this post