As is customary I thought I would look back over the past 12 months and review the projects undertaken and potential ideas for the next year.
It never ceases to amaze me how many people stop by and take an interest in my ramblings, thanks for looking and taking the time to pass comment. The blog was and is not intended to be an ego trip merely a means of keeping a record of activity and to try and keep me on track in terms of projects and painting output.

A pretty good performance on the painting front various odds and ends but in the main 337 figures beating last years total by 4 figures....

On reflection last year was dominated by Oriental gaming and the revisiting of older projects such as The War of Worlds Project.

Russo Japanese War - 28mm
With the bulk of  Infantry completed a year or so ago, I was looking to bolster the Cavalary arm for both sides, Tsuba miniatures were late in producing the Japanese Cavalry which set me back a little. However the cavalry are under coated and are on the paint table and should be first off the production line this year.

I fancied building a period village to fight over or to perhaps recreate some of the engagements around Port Arthur. Thanks to the guys at Curtney Minatures they produced some great buildings espically when mixed with some of the 4ground fencing. They should be useful for other projects.... 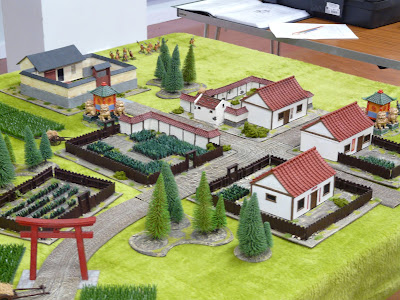 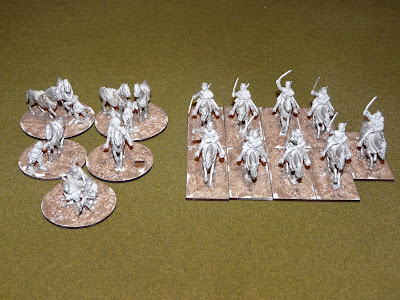 Not really sure how this project came about, I picked up a copy of the 70's box set and figured it would make an interesting skirmish game using Songs of Blades and Heroes and allow me to get a little more use out of the Chinese village. Before I new it, I was ankle deep in Sung Infantry and a draft set of amendments for Dux Britanniarum set in ancient china.... more on this in 2016. 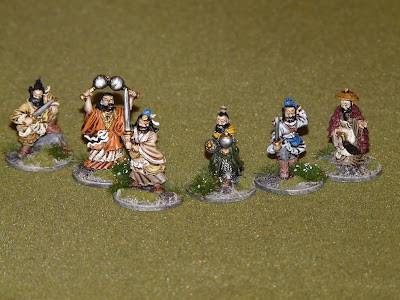 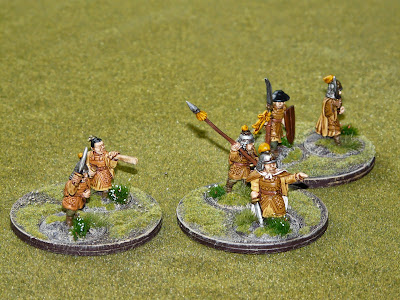 All Quiet on the Martian Front - Martian Empires - 15mm

Several years after starting this project, I finally made serious progress on recreating H.G. Wells - War of the Worlds. A number of strongly worded e-mails to Alien Dungeon saw their Drones and Armoured vehicles arrive 2 years after being backed on Kickstarter,  driven on by these I bolstered the Brits with more Infantry, Artillery and Cavalry.
With the England Invaded Campaign now well underway, I don't envisage adding further miniatures to this project.... but you never know?
It is nice though to look a collection and think that it is finally complete amnd getting game time. 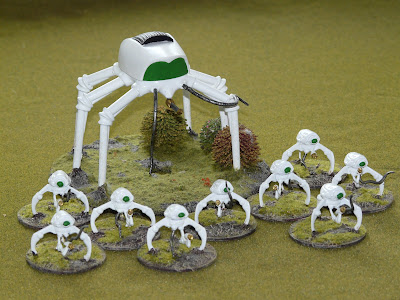 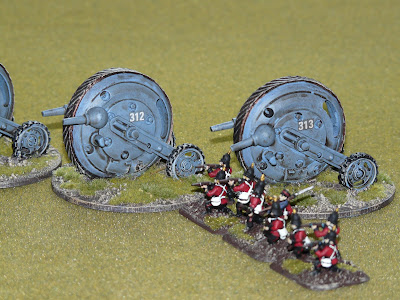 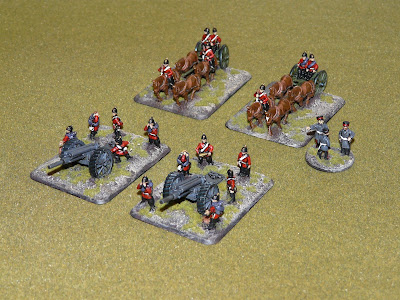 Spanish Civil War - Chain of Command - 28mm
Much of the early part of 2015 was taken up by a club project for the SCW with a number of players gathering their forces, I opted for Nationalists and elements of the Morrocan Army of North Africa.
This really has not had the game time I was hoping for, but with other club members building their forces they should see more game time this year. 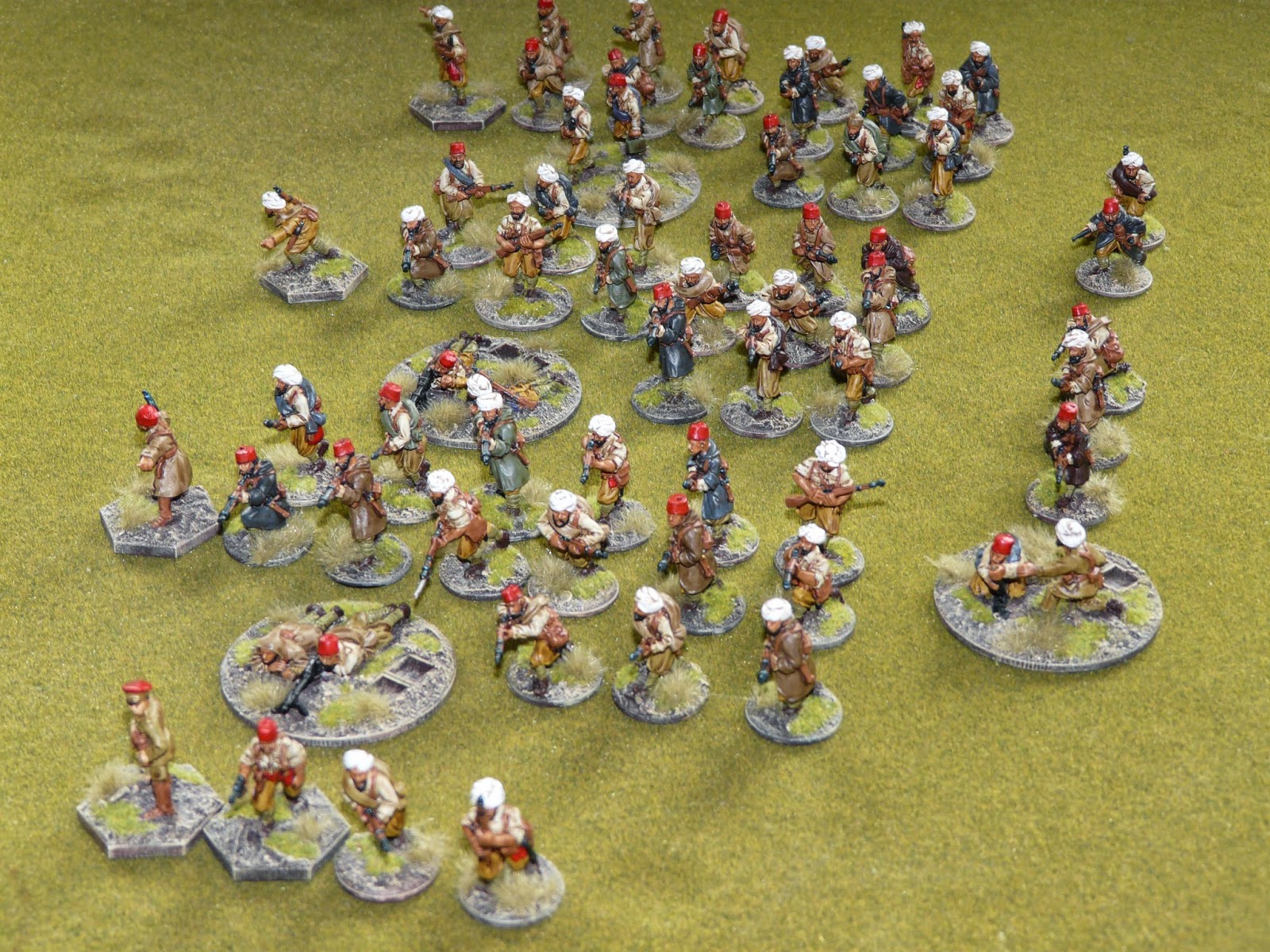 Other minor projects had their numbers bolstered including some odds and ends for the Elizabethan Irish/Zombie Wars Project with Witches and Cannons added and the switich to Songs of Blades and Heroes as a rule set. 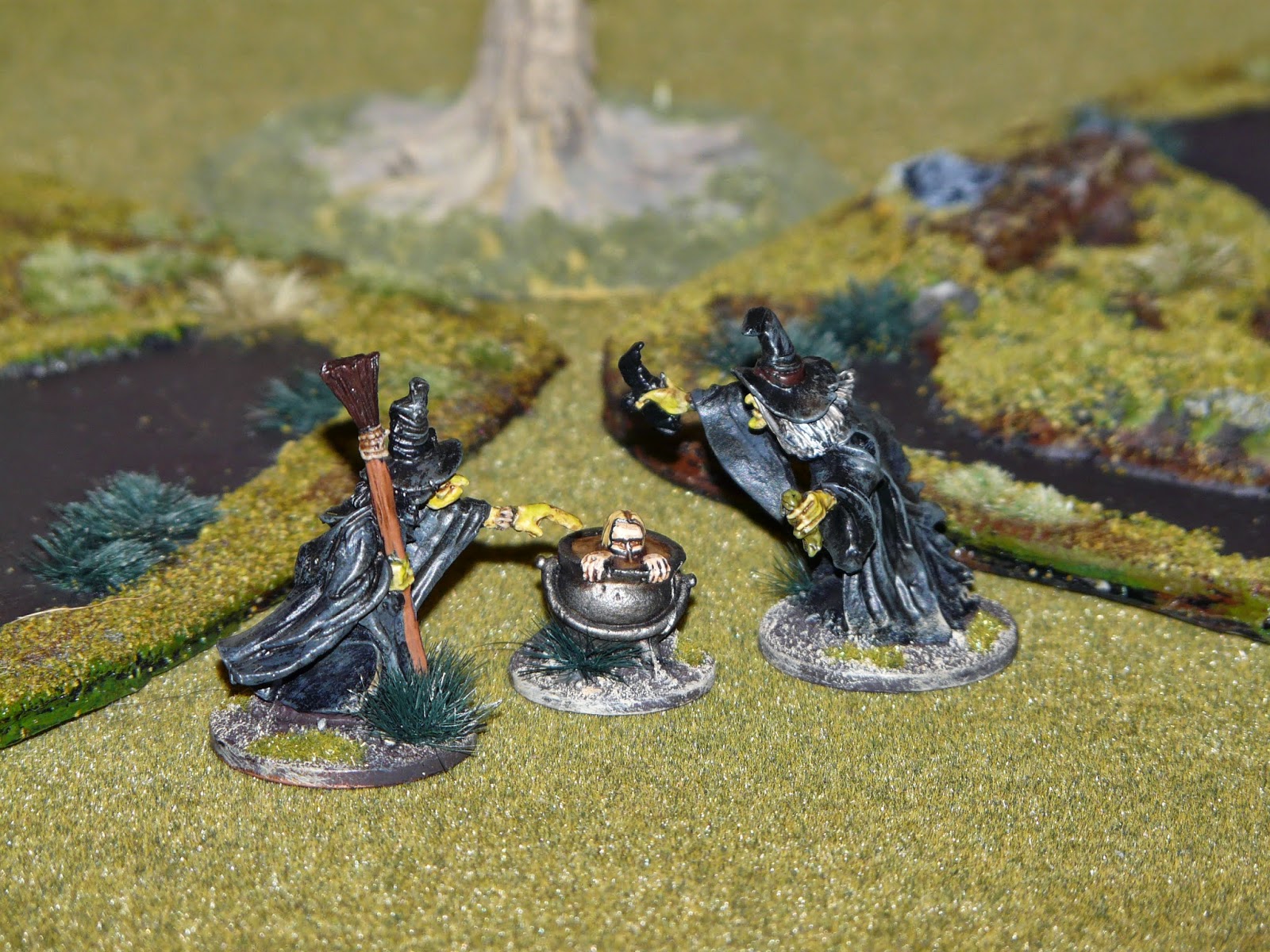 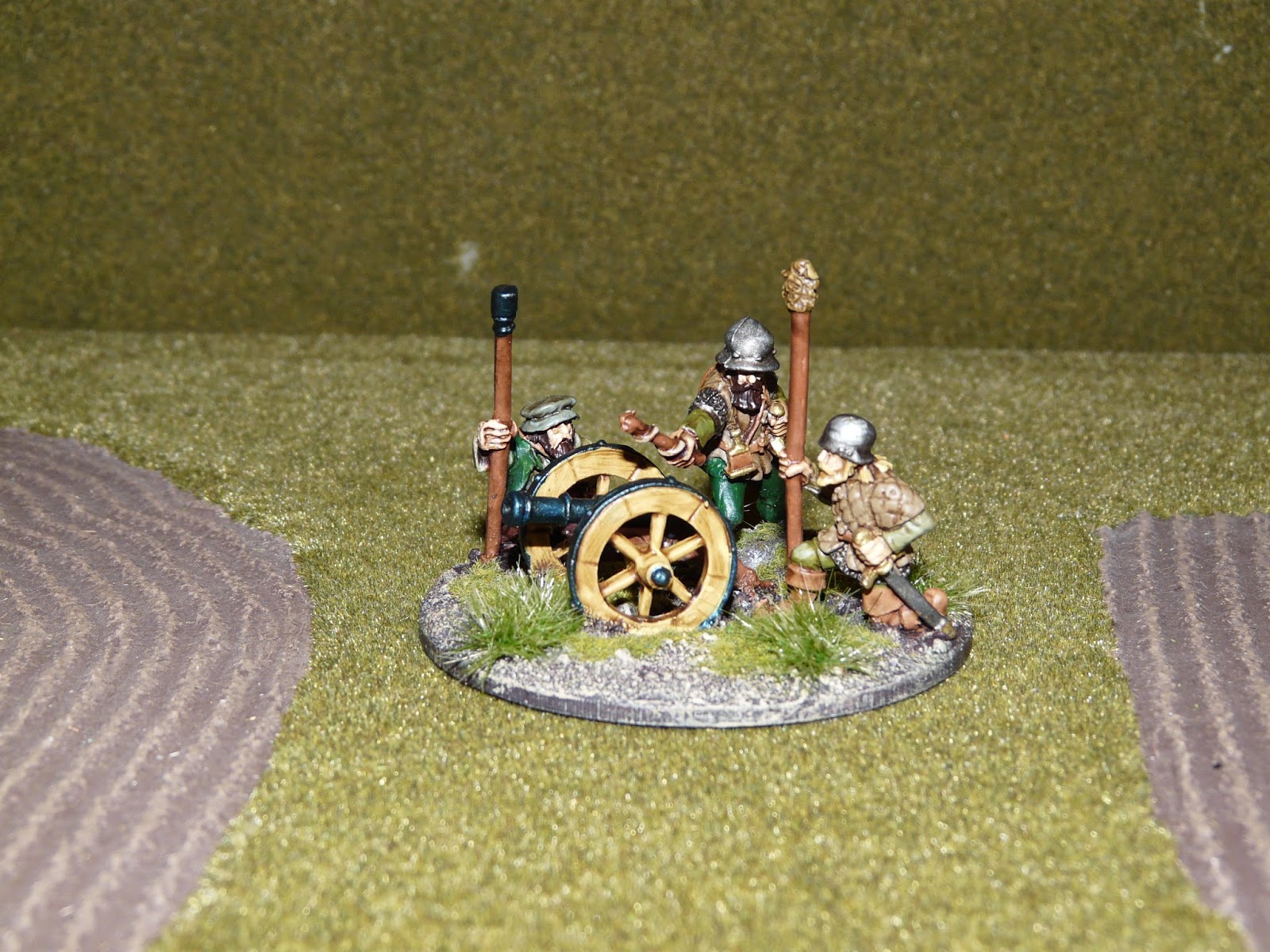 Elsewhere Furphy's recruitment to the club has given me plenty more things to think about including Chechnya in 15mm and the start of urban terrain which will fit several projects. 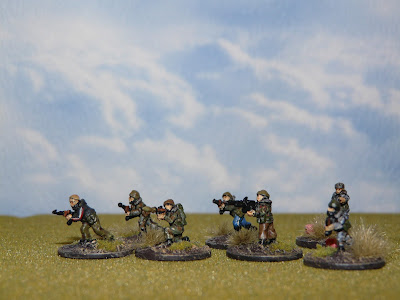 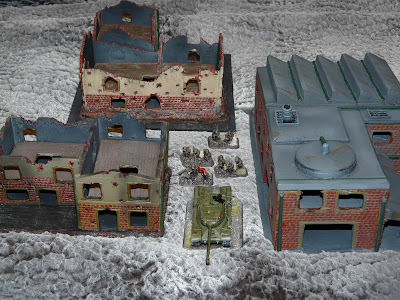 A pretty busy year on the gaming front but what for 2016?

I suspect 2016 will see plenty of Cold War period miniatures appear with the release of Team Yankee, but never one to follow a trend figured would more the period on a decade or so.
This project should keep me busy for several months, it fits perfectly with the desire to expand my modern urban terrain and will allow me to play a number of games using Chris Peers excellent At Close Quarters Rules.
Chechen forces are largely light troops and the Russians are holed up in BTR's and BMP1's what's not to like.

The Water Margin/Sung Chinese - 28mm
Having kicked off the Water Margin Project last year, I have loose plans for converting Dux Britanniarum to China and within this pick up some Mongols to give this a more historical feel, however coupled with this is the release of Watchful Studio's Kickstarter which should give me more fantasy elements for use with Advanced Songs of Blades also due to land in the early part of 2016.


Napoleon in Egypt - Sharp Practice 2
These mini's have languished in their storage box for a year or so, but with Sharp Practice 2 due to be released it seems like a perfect excuse to add some additional units to both sides.
The Egyptians/Ottoman's are in a reasonable state with cavalry and Infantry however in the last 12 months Brigade have brought out some lovely new pieces which would make some great additions.
The French are nowhere near being ready to face up against them, I brought a box of Victrix plastic infantry from Victrix, nice figures but I am losing bayonets already, I just can't see them being a long term investment so the plan is to switch to Brigades Miniatures metal offering. 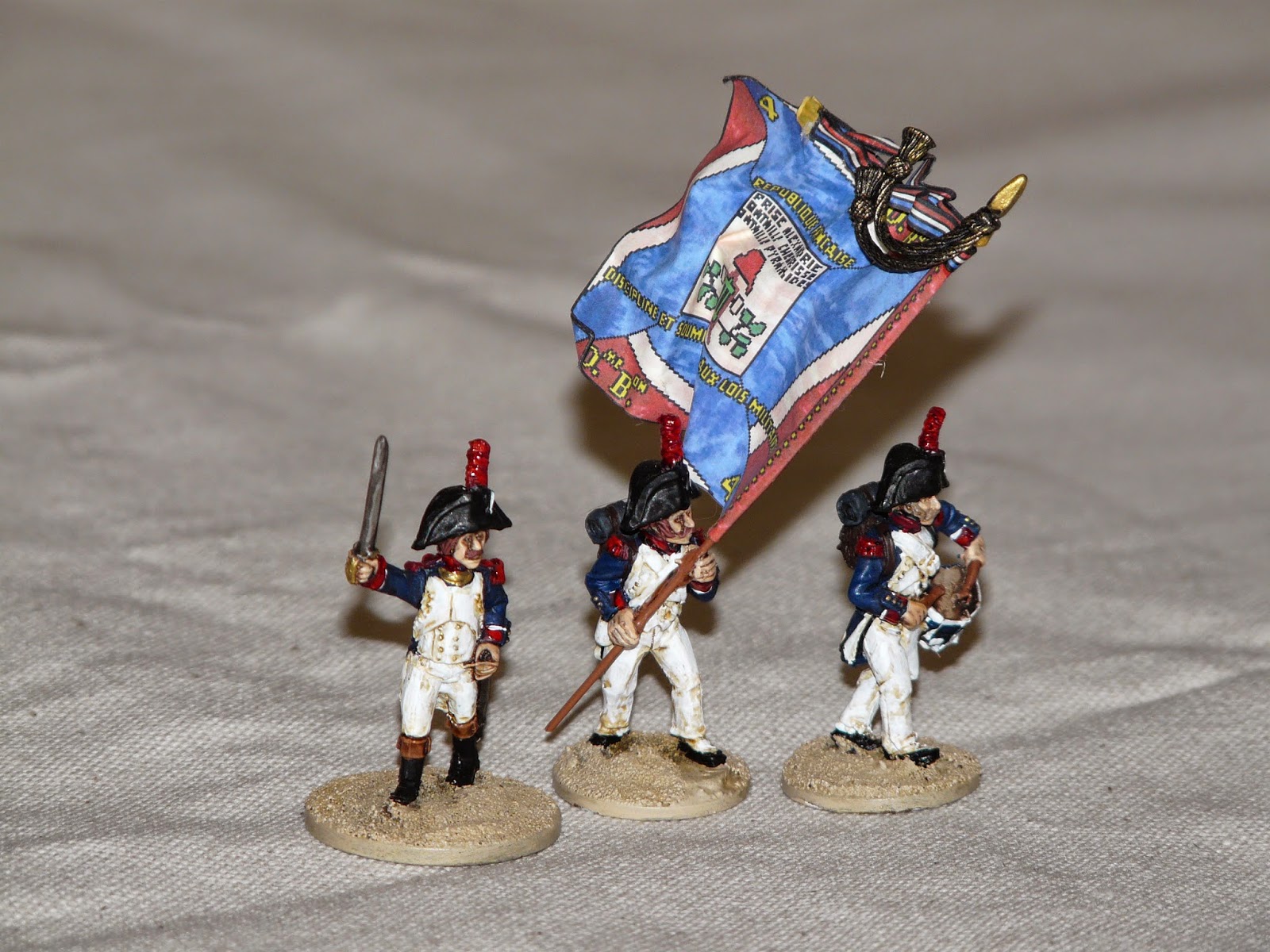 African Wars - At Close Quarters
I have had plenty of fun last year with the Zikanga campaign but need to devote some time to Spectre Miniatures extra militia which I backed on their Kick Starter some 12 moths ago. When you already have 80 militia types the thought of adding a further 40 does not fill me with joy... still they need to be painted.

Pulp Gaming.
I have an urge to paint up some Pulp type figures for a fantastical type adventure - Think Warlords of Atlantis or Journey to the Centre of the Earth, I am not sure whether this was to much junk telly over Christmas or something more serious.
Certainly the Warlord teasers for Savage Core have not helped the urge.