Operation Market Larden - A Day of Lard at Wyvern Wargamers.

Saturday saw the first formal out of the RJW Project at our club event Operation Market Larden, the plan was to have an open day devoted to Richard clarke's excellent Too Fat Lardies rules, the day did not disappoint, over 40 gamers, with 8 different games on offer including the forthcoming Chain of Command hosted by the man himself.

The day had a different feel to some of our previous events such as the Annual Saga event, the attendee's were very much more the "fun" gamer rather than some of the competition players who generally turn out for other events... I expected nothing less given the nature of Rich's rules...

We have some learn's in terms of the next Lard Day, the Chain of Command rules were hugely popular, so we need to think about how this is balanced out next time.

I was able to put on Two Mud & Blood games during the day hosting two chaps who had made the trip up from from Bristol Steve & Craig. Great to meet fellow gamers who have the same approach to the hobby as we do. Thanks for coming along guys.


One of our guy's had done an excellent job of scratch building a complete section of trench and some great barrage markers for his WW1 project, but they were perfect for this encouter and an absolute pleasure to fight over.

On to the Action.
Game One.


The Action is set around the Battle of Murken 1905, the very end of the Russian line, the trenches are not extensive, the troops on both sides thinly spread as the main fighting is happening several miles to the West, but someone has to keep the opposition pinned.
Orders are for the Japanese to break into the Trench System in around 2 hours real time. 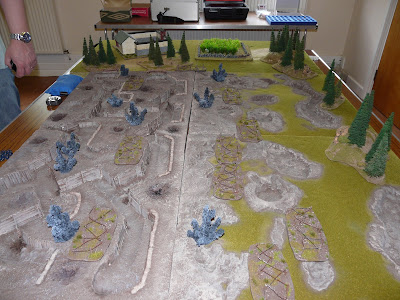 The table view from the South, two lines of trenches with wire to their front. 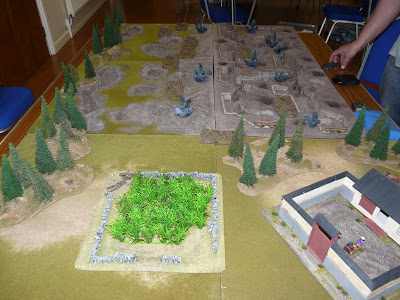 View from the North with high Millet masking the flank and a compound securing the line. 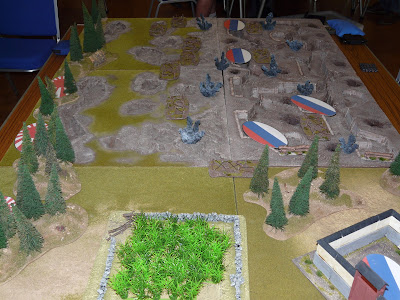 The Blinds are deployed and both sides roll away looking to spot their prey. 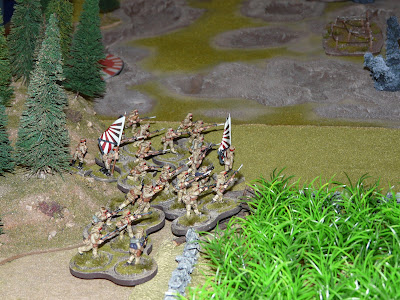 The Japanese are spotted and rush forward, having committed 75% of their forces to a strong left hook flanking the Russian positions. 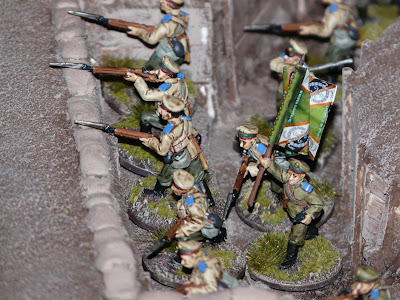 The Russian's line trenches looking to pour fire into the advancing Japanese, figures largely from the excellent Tsuba Miniatures. 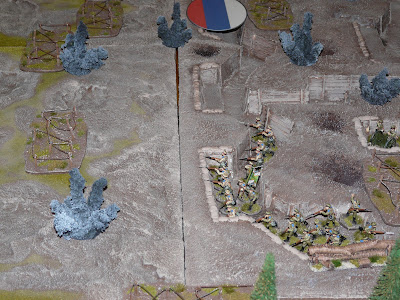 The Russian's had checked the Japanese advance placing the bulk of their force to the left of the trench system and supported by a HMG to bolster their defences. 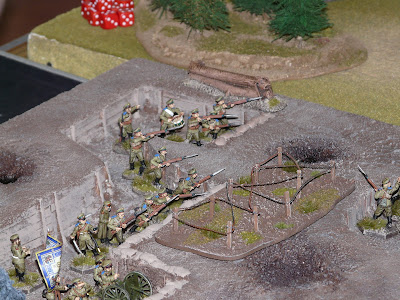 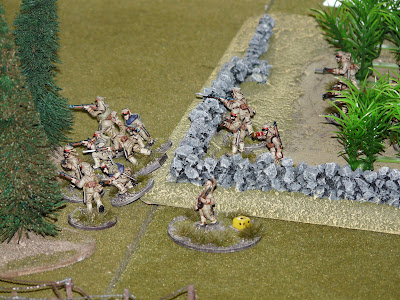 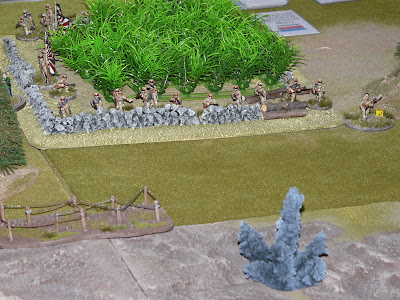 The Japanese press on, but begin to pick up Shock points as the they press the Russian left. A section deploys in the Millet field pinning the Russian's in their trenches. 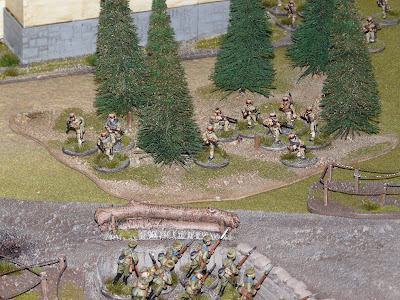 The Tree line serves to slow the Japanese attack and despite a number of valiant charges they are unable to break into the Russian lines.

A marginal victory to the Russians.


A very different affair the Russian's concerned about the left flank had strengthen it substantially, but were caught cold and coupled with a poor run of cards which restricted their movement were unable to bring their numbers to bear before the Japanese broke into the trenches. 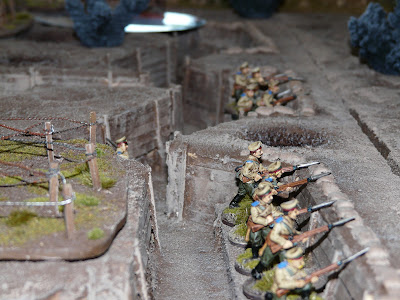 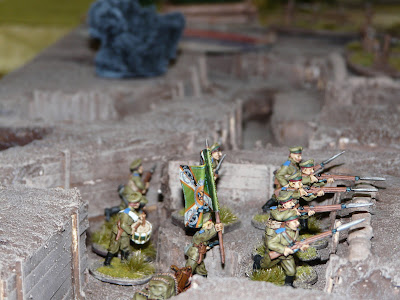 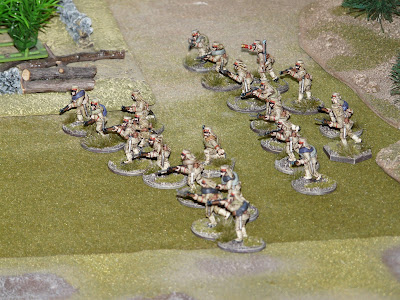 Once again the Japanese sweep forward, using the additional "Banzi" card which provides them with a bonus move to close with the trench line before the Russians can bring sufficient fire down on them to slow the advance. 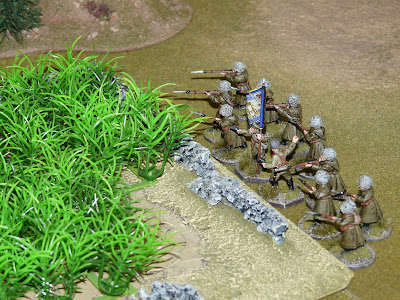 The Russian's attempt to rush forward additional forces to cut off this attack, but Friction and Hesitant Troop Cards make the advance a slow process. Reinforcements from Copplestone Castings Back of Beyond Figure range. 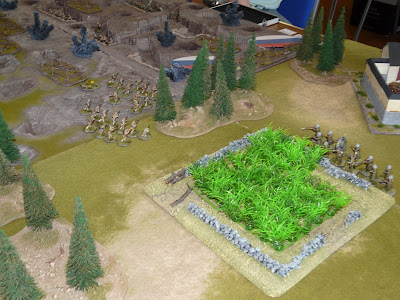 The Russian lines split in two. 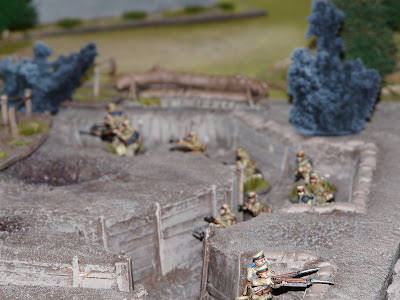 Japanese in the trenches. 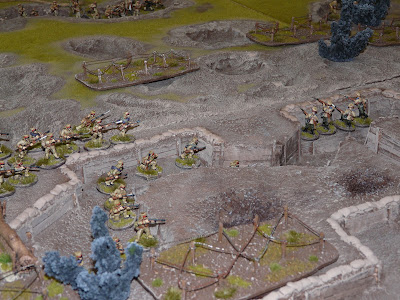 Charging down the trench line they catch the Russian defenders cold who rout form their position as the Japanese have over 4x the attack dice of the defenders. 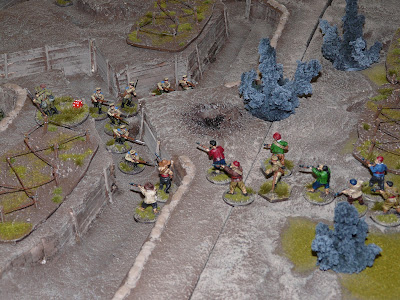 Having hardly caught their breath and hindered by 6 points of shock they are charged by Chinese Honghuzi Bandits who force them to flee to the rear of the trench system, unable to recover for the rest of the game. 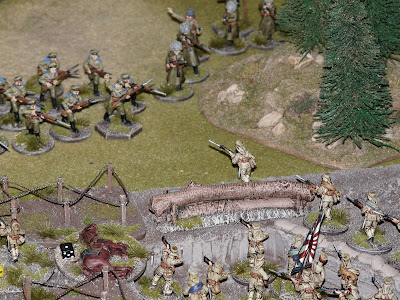 Forced to counter attack their own trench, the Russian's suffer the same fate as the Japanese in the first encounter.

Victory to the Japanese.

A cracking couple of games, unfortunately I fear they have only served to add to the painting backlog as I now have a list of "extra's" needed for the next encounter....