Another outing for the RJW Project
This time a river crossing inspired by a scenario on Bart Zynda's excellent blog, you can see more here. http://asienieboje.blogspot.co.uk/2012/11/battle-of-ford-on-river-x-bitwa-o-brod.html 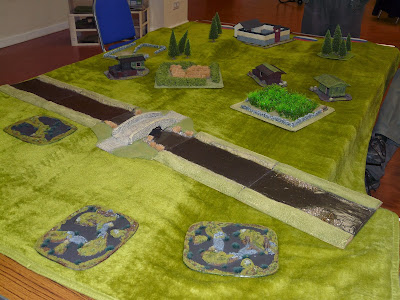 The Purpose of the Scenario


The Russians maintain a defensive line on the river Yalu, the Japanese seeking to turn the Russian flank scout tributaries of the Yalu, the Japanese must breach the river and create a bridgehead to continue the advance.
The river has 3 crossing points each of which present a viable option to continue the advance The river crossings each have a small village of 2-4 huts with hilly ground to the North of the river.


The Russian's succeed if they hold the their ground by nightfall preventing the Japanese from advancing North and establishing a bridgehead, the Japanese must force the Russians to abandon their positions and inflict as must damage as possible on them.

Major Lipov was unhappy yet more orders to fall back, your Cossack cavalry have provided a useful screen from the advancing Japanese allowing you to cross the Yalu tributary. Orders from HQ have finally come through to allowing you to halt and face the Japanese.


The March rains have made the ground a quagmire and a heavy storm in the night has meant contact has been lost with the Japanese Advance guard, they could be looking to cross the tributary at any one of three possible crossings.
A bridge at Village of Howhi and fords at Howmidel & Howlow. 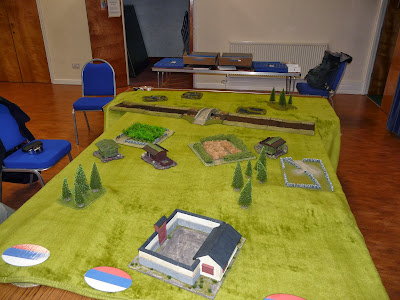 
Lt Yosi Omura of the 17th Infantry March through Korea continues with the Russians steadily withdrawing before him, Osmura has orders to swing right to turn the Russian flank pinning them against a tributary of the River Yalu.
The March rains have made the ground a quagmire and a heavy storm in the night has meant contact has been lost with the Russian rearguard, they could have crossed the tributary at any one of three possible crossings.
A bridge at Village of Howhi and fords at Howmidel & Howlow.

AAR
As umpire I asked the players to distribute their forces across the 3 crossings, unknown to the Japanese player, they would be fighting over the crossing where they had placed the Artillery.
Reinforcements would flow through from the other crossings after 6 + 1D6 turns fro the middle crossing and 6 + 2D6 turns from the higher crossing. 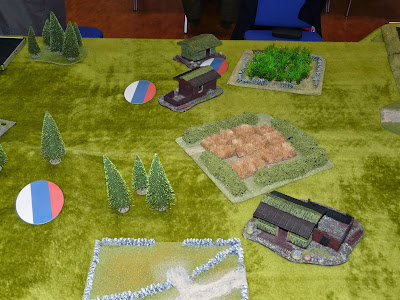 Both sides rushed forward split across three blinds, 2 of which could be dummy's, the Russian's using their Vodka card make the most ground to seize the outskirts of the village. 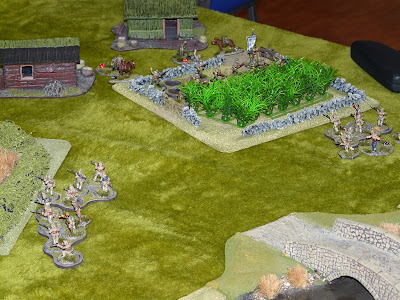 By Turn 3 the Japanese had crossed the river and had split their forces between the right and left flank, unfortunately both the Russians and Japanese had the same idea, seize the maize field with it's stone walls. They crashed into one another on blinds the Russian's had combined two sections and were able to defeat the aggressive Japanese throwing them back over the stone wall, but they suffered significant casualties in the process. 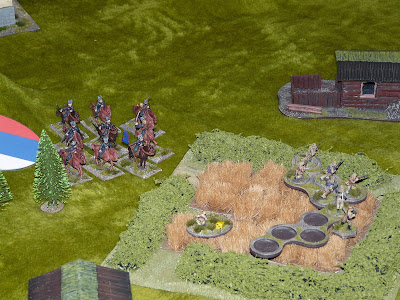 Russian Cossacks appeared on the battlefield appearing from a blind and threatening the Japanese who were engaged in a fire fight with the Russian defenders in the maize field. 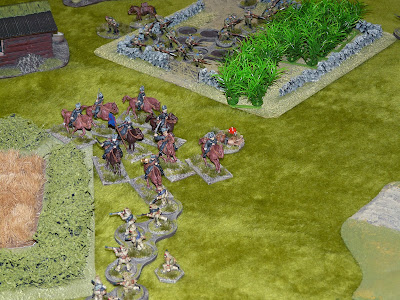 Additional Japanese Infantry had crossed the bridge, but were caught in the flank by the charging cossacks, forcing them to head left away from the bridge crossing. 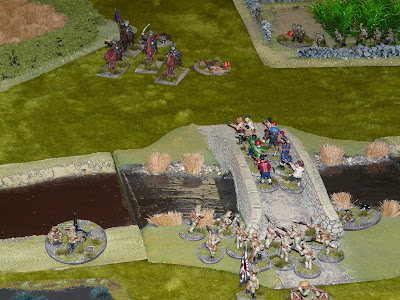 As Japanese and Chinese forces forced the bridge they were greeted by withering fire from the increasing Russian defenders who had begun to line the stone wall of the maize field. 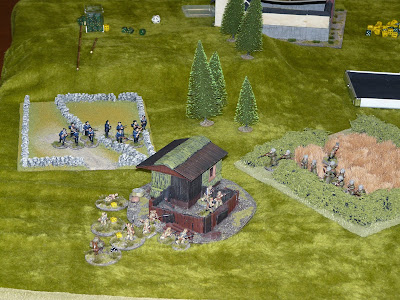 As the night drew to a close the Japanese were under serious pressure with shock and ammo markers a plenty and Veteran Russians and sailors closing in on both flanks.

The first Russian victory of the campaign.
Posted by Stuart S at 21:32