Lord of the Rings Campaign - March of the Dark Lord.

Much like many gamers it does not take long for fun games to turn to campaigns and so it proves with the recent run of LOTR games.
We are a fickle bunch.... mid-lock down I planned on playing out the Narnia campaigns using the risk map, but ideas change and the Infamy Infamy rules are certainly fun so a switch to Middle Earth and a slight tweak to the mechanisms and campaign rules.
I give you the Lord of the Rings Campaign - March of the Dark Lord (or they eat horses don't they?)
Sauron the Dark Lord of Mordor is on the march and his armies of Orc's, Trolls and Goblins are pushing into vast areas of Middle Earth.
The longer the alliances of Elves and Men can hold out the greater the number of troops will rally to the cause.
The first side to secure all Gold locations on the map wins.... 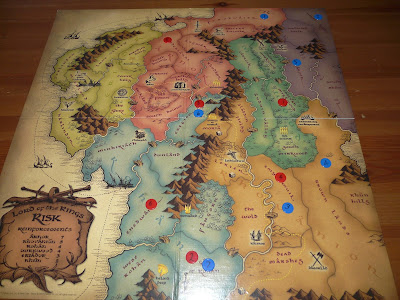 The map above shows the opening moves, with Sauron in blue and the forces of good (sorry author bias) in red. The mines of Moria and Isengard in Fangorn are already in Sauron's control and more armies are entering from the east.
The campaign is low on paper work and more an excuse to get in some linked games on the table, I was inspired by the recent diplomacy game with the use of supports and defend options which impact on the scenario options within Infamy Infamy and the points available.
Let's see if the game play changes now there is something to play for rather than simply pride....
For those interest I have outlined the basic campaign rules below.
Points.

Reinforcement Points awarded every 3 months/turns - 10 points for each territory held, with a bonus 50 points for holding an entire region. Points can be spent using the point totals within the Infamy Infamy army lists/ LOTR variants.

These must be deployed from a branded location in a ‘supplied’ territory that can be linked link back to the main home territories.

The maximum points of any Army created from a territory during the reinforcement phase is from a Black branded Territory is 100 Points, A Gold Brand has 200 Points available. Standing armies may be reinforced as long as they are supplied but only to a maximum of 200 points.

Initial forces are as follows.

The maximum points of any Army is 200 Points but must start the campaign as a minimum force of 100 Points.

Armies move at a rate of one territory per move. Mountains and Rivers can not be crossed unless by mountain pass or bridge. For the purposes of the campaign the sea channels are not available.

Only one Army can move or occupy a territory at any one time.

Each Army will be given one of the following order choices and must name the territory they are moving to or supporting for the move to be actioned.

Move – Armies move from one territory to the other between their own lines or attacking enemy forces, if two opposing enemy forces are entering a vacant territory a ‘General engagement’ will always be fought.

Defend - If an Army moves into a defended territory, the defender will roll for the scenario type and can choose to be the attacker or defender in the scenario.

If a Gold Branded location is attacked then Scenario Six ‘Outpost Attack’ will always be played regardless of a defend order.

Support – If an army chooses to support a bordering region then the defender will 25, 35, 45 support points based on 1D6 (to a maximum of the size of the supporting army.) rolled even if this takes the defender beyond 200 points.

Any losses received on the day will be shared equally on a pro-rata basis between defenders and supporters.

So there you have it.
First up an Alliance of Men patrol heads into Emyn Muil from South Mirkwood encounters an advance force of Orc's marching up from the Deadlands... out numbered 2:1 can they avoid the enemy vanguard and spread the word of the pending invasion?
Posted by Stuart S at 19:07