With the first phase of the Hittites complete I thought I would ease myself into the New Kingdom Egyptians with a batch of shock markers.... I know I could just put a dice against the unit but there is something rather pleasing to the eye of a tailored base marking the status of the unit. 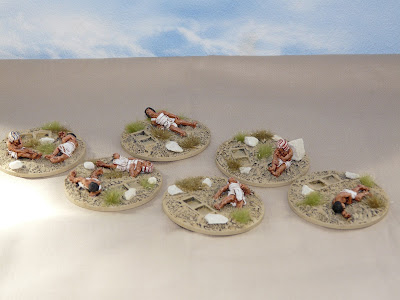 The figures are from Wargames Foundry and one pack of dead and injured have given me enough for 6 markers, each base contains two sabots for D6 dice which would be enough to mark the unit for shock or fervour. 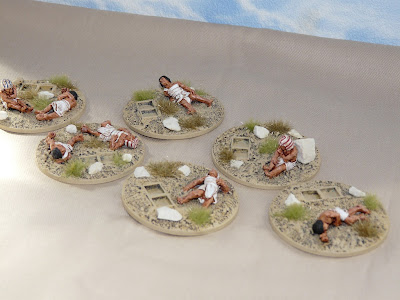 Worst case they can double up as ambush or deployment points.
Now for the hard part a spear regiment to form the back bone of the Egyptian forces... No pressure but I would like to have enough done for the first club night in November unless Covid buggers up the plans.
Posted by Stuart S at 15:13