With the Dee Sanction at over 800% funded on Kickstarter it got me thinking about kicking off some of the Elizabethan Zombie War Games. 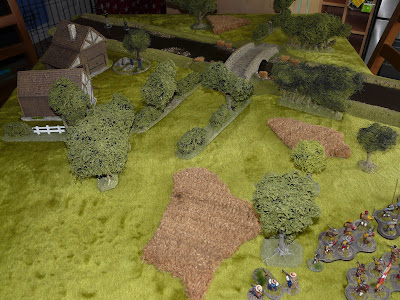 Whether it was lockdown boredom or the recent run of LOTR games using Infamy Infamy I figured I would adapt the Warlords of Erewhon - Army of Darkness to Infamy, Infamy - Both rule sets use chits or dice to provide random orders, which are a great aid to solo play. 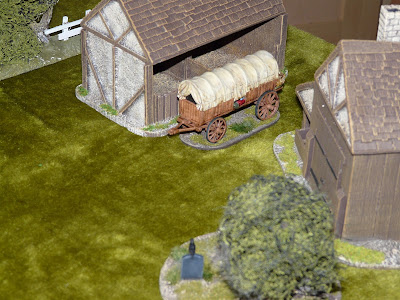 So a short game to give the Infamy horror rules a run through.
Back in February the Spanish had cleared the village of Barnford see here. However the dead continued to seep into town, an earlier scouting mission identified the main entry point as the  bridge at the far end of town, if it could be blocked the Spaniards could secure the town properly. There was a sturdy wagon which would be perfect if it could be reached. 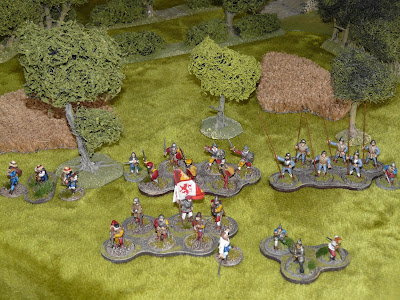 During lockdown one, I painted a number of new units for the Zombie Wars, but have yet to get them on the table. The perfect excuse. So a hand picked group set off on the mission. 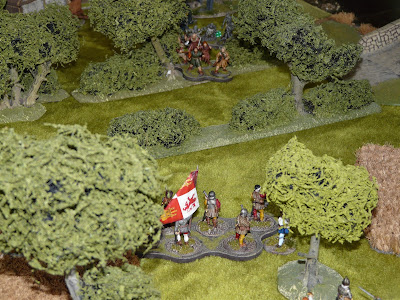 The hand gunners picked off a few of the dead as they shuffled forwards. The way to the farm seemed clear of the dead. 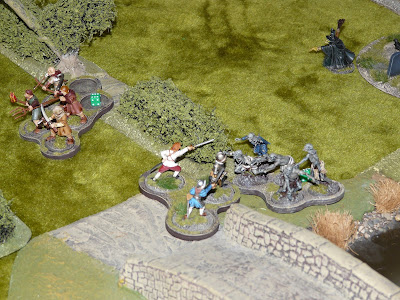 Alvar Fanez and his body guard rushed forwards to secure the bridge and dispatch the few dead milling around, however despite hacking and slashing the dead would not die. 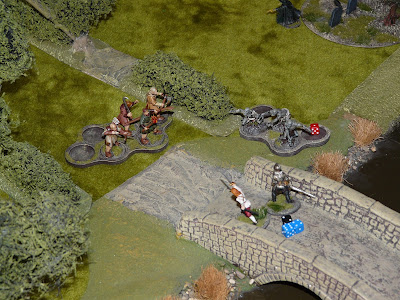 Fanez was beaten back... after being caught in the flank by some of the recently returned. That's really not what I had planned. 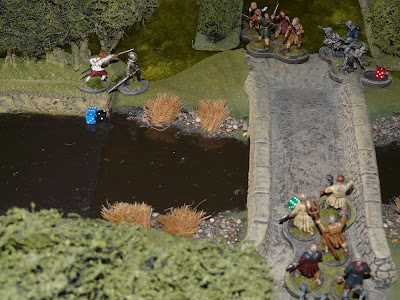 With hordes of dead now crossing the bridge, Fanez fell back along the river bank, having lost one of his body guards but he had escaped the clutches of the dead. 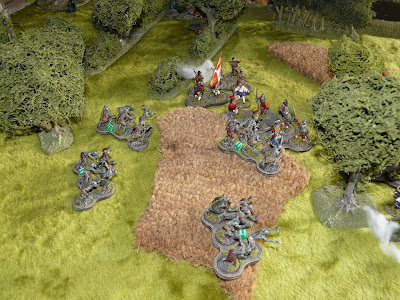 Meanwhile his men were having there own issues, the noise of the handguns had attracted numerous groups of the dead who slowly advanced across the cornfield. 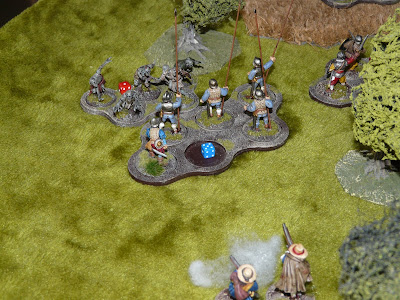 The curse of newly painted figures.. The Pike block fell back unable to hold back the dead. 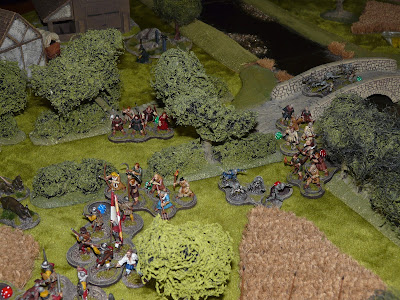 Unlike the Warlords of Erewhon rules the dead were no push overs and crept ever closer to the living. The hand gunners engaged to their front were caught in the flank by beguiled villagers who ambushed them and were driven back...  The living force morale slipped to zero. The bridge would remain open for now.
A fun encounter, the new rules worked well and provided some fresh challenges for the living, they will need to be far more cautious in the future.
Perhaps once Lockdown Two is finished I can get a few more games in.....
A summary of the rule modifications are set out below.

The living play uses all of their Sigma Cards first conducting there actions before the undead player.

At the end of a turn, an unactivated undead group will move 1D6 towards the nearest living unit, if any Sigma Cards are in play these may be used to direct an undead unit to a target of the players choice.

The living ignore shock when moving on the table top.

Undead -  Each kill inflicted within hand to hand roll on the following chart. Each success adds a further figure to the unit.

Undead ignore shock up to the point that it stands at double the number of figures in the group. At that point the group is removed from play.

Undead have a limited ambush of 6”

Necromancer – On two Sigma Cards an additional undead unit from any deployment/ambush point may be deployed.

Fleet of Foot – All Terrain penalties are ignored (Rats and Crowz etc.)