Wargaming the Spanish Armada - Flight of the La Rata

Having been painting items for this project for several months, I thought it was high time they got an outing. This scenario represents an incident following the break up of the Spanish Armada and the return journey to Spain.

Following another raging storm off the Irish coast the merchant carrack  La Rata Santa Maria Encoronada (419 men, 35 guns), which had run for the Irish coast in desperate need of repair, along with four other ships of the Levant squadron and four galleons finds itself beached in Blacksod Bay. 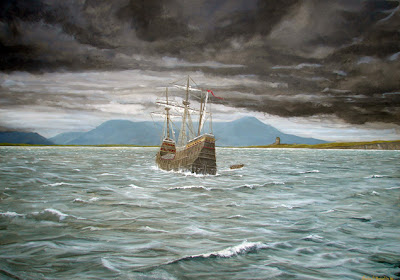 The Rata carried a large number of noblemen from some of Spain's most ancient families among them Don Alonso Martinez de Leyva. The Spanish made land fall on the 7th September, seizing two nearby castles and fortifying them with munitions and stores from the beached ships.

The scenario represents the efforts of the local earl to capture these noblemen for ranson to the English Crown before they could reach the first castle. 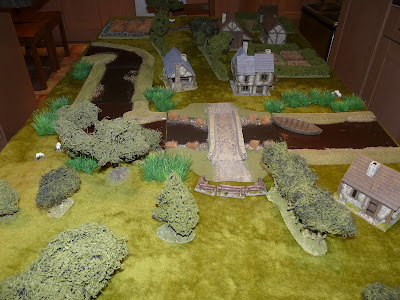 The view from the Northern edge showing the bridge into the village, the barricade that was to prove crucial can be seen in the fore ground. 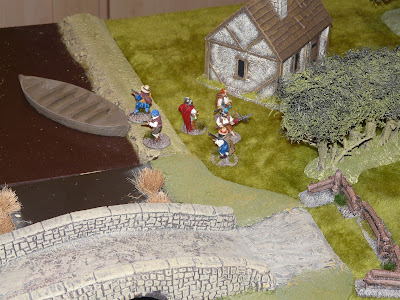 The Spanish advance party disembark on the northern river bank, cavilers and muskets at the ready. Don Alonso Martinez de Leyva can be seen at the centre of the party. 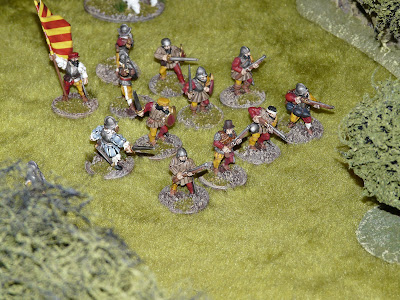 The main Spanish force advance on table led by a Spanish noble man, the Spanish force was made up of 3 sections of Caliver and Bucklermen, together with standard bearers and musicians. 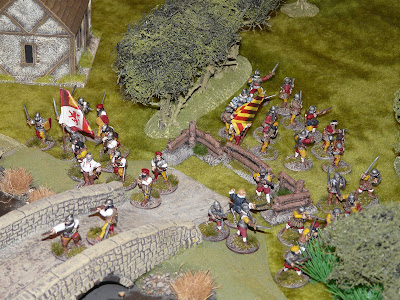 Yet more Spanish pour on to the table and secure the northern side of the bridge, the accompanying noblemen usher the troops to defensive positions unsure of where the Irish will strike. 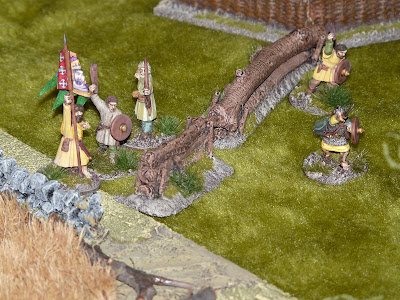 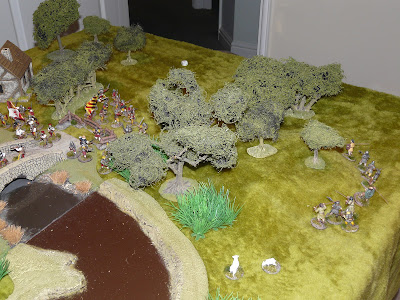 The Irish begin to appear in penny packets and rush to block the Spanish advance, a large Irish force musters behind the hill to the East of the bridge. 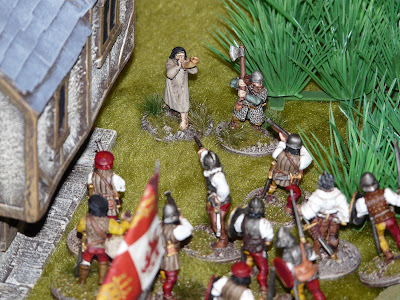 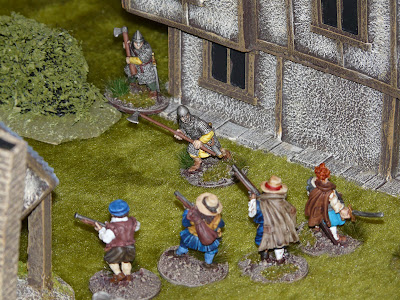 The trap is sprung and Irish gallowglas rush from the dawn mist attacking the Spanish mass, their axes taking out several of the Spaniards who lacked armour as they were armed with black powder weapons, it was only when the bucklermen and noble men joined the fight were they able to defeat the attackers. 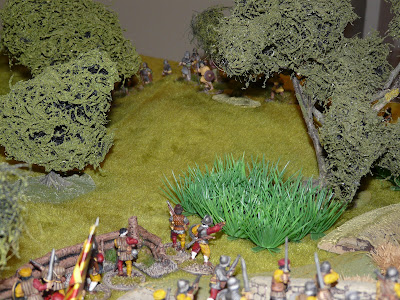 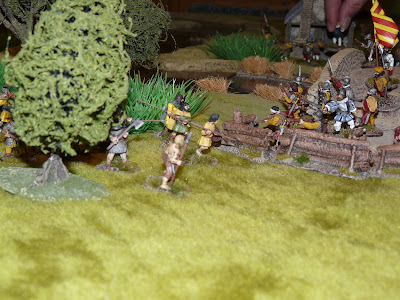 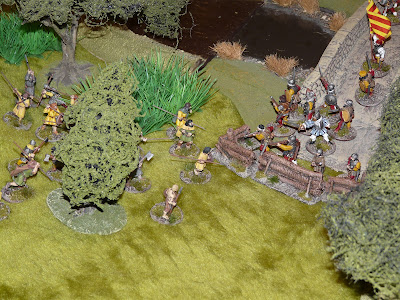 On the northern edge of town the Irish Kern have amassed enough warriors to break cover and charge the bridge defences, hoping that numbers will win the day. 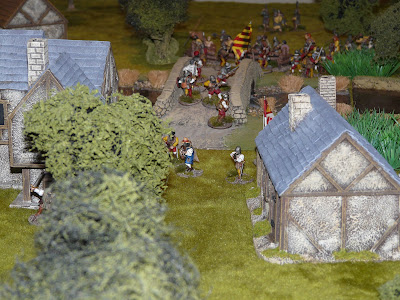 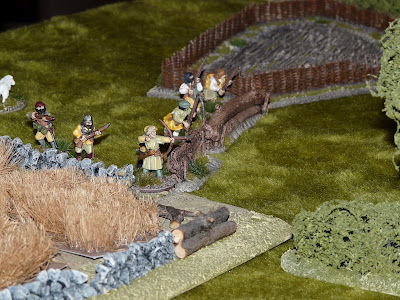 On the southern side of the bridge having dispatched the Irish ambush party the Spanish engage musket armed Kern and slingers, with neither side being able to secure victory in this long distance fire fight. 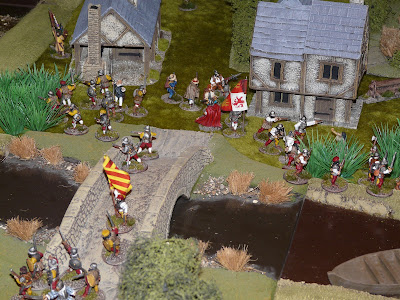 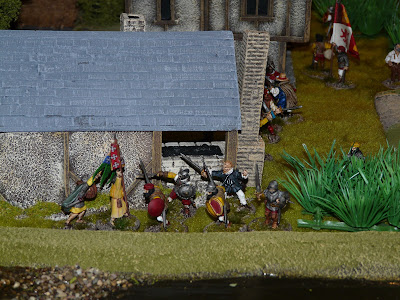 The Irish attempt to sneak up on the Spanish at the bridge using the rear of the blacksmiths as covered but are spotted and blocked by a Spanish nobleman and his force of buckler men. 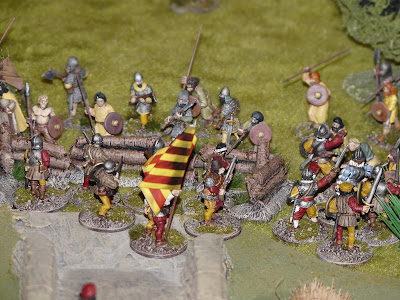 Meanwhile at the barricade the Irish make slow progress, losing several troops on the walls of the log defences, without being able to dislodge the Spanish defenders. 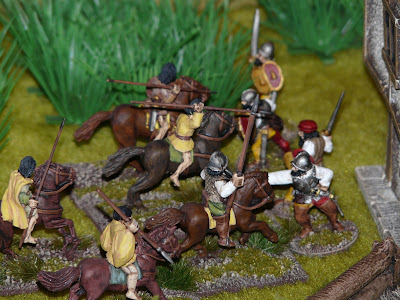 On the southern flank Irish Cavalry charge into the Spanish flank defences, but are pushed back with by a combination of musket fire and sword work.
With mounting casualties the Irish retire from the table leaving the bridge and the village in the hands of the Spanish.

I used the LOTR rules as the core rule set with a number of modifications to introduce fire arms.
The Spanish are mainly Foundry with the Irish a mixture of Gripping Beast, Sgt Major Miniatures and Crusader.
Posted by Stuart S at 09:47 9 comments:

Last Saturday saw my club the Wyvern Wargamers hold our first ever Tournament, the intention was to raise the profile of the club and grab a few more members to boot, we had been planning the event for a number of months and I am pleased to report the event went without a hitch.

22 players from as far a field as Manchester and Leicester a generous amount of prizes kindly donated by Gripping Beast. The fantastic benefits of having a great manufacturer only 5 miles from your club.....

Unfortunately not to many photo's it was that intense.....

The Hall Just before kick off.

I must be honest I was a little apprehensive at the thought of running and playing in a  tournament, the hobby has always been a casual past time and not one to be taken to seriously in terms of game playing.
As Rich Clarke over at Too Fat Lardies says - Play the period not the rules....

However I was pleasantly surprised, a great bunch of fellow gamers, no massive ego's, players willing to help out us newbies and the mutual appreciation of other gamers....

I had opted for a Welsh Army under the Saga Rules albeit they will be Irish when the next supplement is released.

Battle at the ford.


A lesson in Saga.
I bloody hope the rest of the day was not going to be like this, Matt a cracking fellow who later went on to win the tournament gave me some valuable lessons in Saga, I have always tried to move the army on mass spreading the Saga dice across the force, he loaded the battle board with dice and applied them to one single unit applying several heavy blows with I could not recover from.
He was aggressive often ignoring the likelihood of picking up fatigue to ensure he could strike winning blow.
A great introduction to how the game should be played and a reminder to all don't try to play like a Viking when you are a Welshman...


Game 2 Viking vs Welsh
The Escort


Yet more Vikings, this was a lot closer, I managed to use the Welsh Javelin ability to better effect thinning a couple of Warrior and Berserker units before they got to close.
I still got caught again with aggressive movement by the Vikings running down my cavalry and wiping them out thanks to the Vikings Valhalla ability.
Thanks Sam another lesson lean't - keep at least 2 Medium moves away from Vikings...

I did however manage to sneak a wagon away, which must be the first time ever and learn't the true value of the "Children of the Land" ability for the Welsh.


My best game of the day, sorry Mike..... I did feel a little bad about this engagement, I used the Welsh to their best effect moving, shooting and moving away again, each time knocking down a few Scots each time, bloody frustrating for the slow moving Scots.
When the Scots did close I had saved the "Strength in Numbers" ability which gave me advantage in the melee. 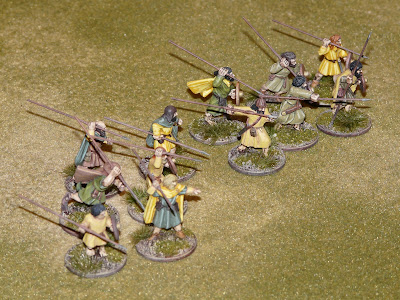 My Javelin armed Levy in action.


The last game of the day.
The Anglo Danes - tricky little buggers, the terrain layout did not suit my terrain hugging, Javelin throwing war band and the constant increase in Fatigue slowed my supporting units to mere observers.
In the end the Danes won the slug fest in the center of the field. Mike Hobbs was on hand lunch time top give us an insight into the future of SAGA there is  some great stuff on the horizon over the next couple of years.

A cracking days gaming and certainly something as club we shall be doing again...
Coming 6th out of 22 was not back either...

Just 6 more cavlary to go before next weeks Saga outing but a days gardening has put paid to any detail work this weekend due to the curse of blisters, still I thought I would turn my attention to the Renedra Wattle which I picked up at Reading last year. 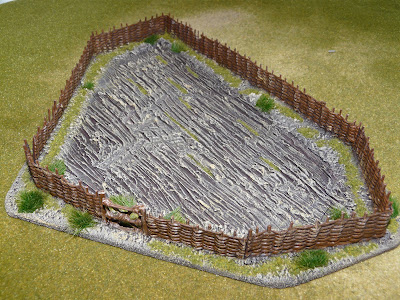 The original intention was to base the fences in 6" strips but I opted for a complete enclosure as I had some MDF sheets to hand. 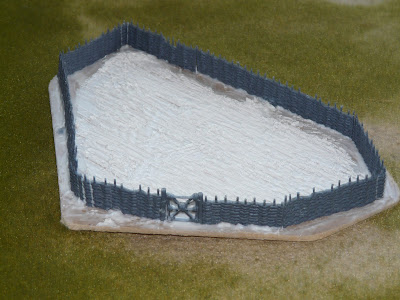 Having mapped out the fencing pattern, I glued the fencing to the board and once dry filled the enclosure with filler before creating plough lines.
A liberal coating of brown undercoat and the field is ready for dry brushing and static grass. 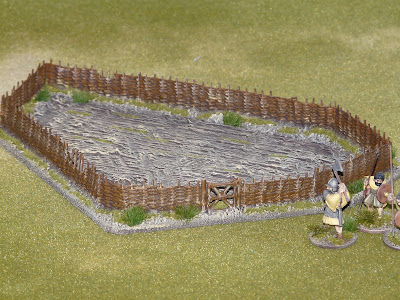 I am really quite pleased with the results, the hardest part was waiting enough time for the glue to dry.
I have enough pieces left for two more small enclosures, which will provide me with 3 good quality fences for £10.00

13 days to go to the Wyvern Wargamers SAGA Campaign day and I am pleased to say I am on track with my project.
Finished today the last of the foot figures, Irish Gallowglass from Sgt Major Miniatures. 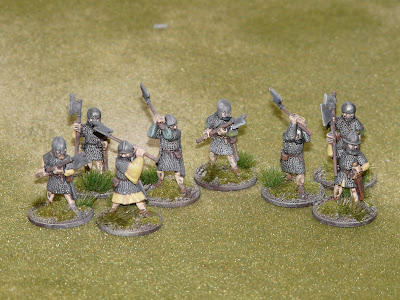 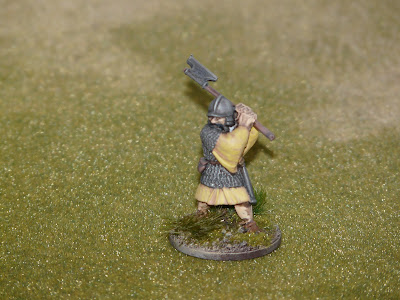 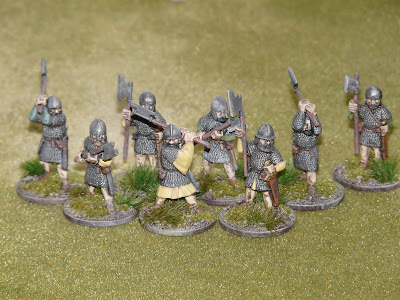 Despite my earlier comments once cleaned up they the have not come out too bad, they should mix in with the crusader and Gripping Beast offerings and will give me of an Irish feel to the warband.
Only the cavalry to go....
Posted by Stuart S at 16:31 1 comment: