Back in the saddle... Welcoming back an old friend...

3 weeks without a posting, unfortunately real life has a nasty habit of getting in the way....
I have done loads of painting and making lately unfortunately it involved painting the kids bedrooms and making flat pack furniture... :-(

Looking over my handy work, I thought I deserved a reward and what should I find on amazon but finally the release of Hordes of The Things 2.1.

Hordes Of The Things Version 2.1 is one of those fast-play heroic fantasy rule sets based on classical fantasy fiction, any figure sizes can be used from 6mm to 28mm.
They allow gamers to reproduce any fantasy army inspired by films, books or TV series, for me it was Narnia series, but more on that later.

The rules have lasted the test of time and I have spent many an evening fighting over a 4ft battlefield on a long running fantasy campaign, it's great to see them back and updated.

They are swift to play a game should be comfortably finished in 60 minutes.
Typically armies consist of only 12 elements with between 1-8 figures per base depending on the troops you select. The rules are simply in design, but many a time I have been undone due to lack of tactics and deployment.

• Improved movements for Warbands and Shooters.
• It offers an option to try base width movements used in DBA 3.0
• A4 size and larger text with wider spacing, which makes it easier to read.

Nowwhere is that storage case......

Email ThisBlogThis!Share to TwitterShare to FacebookShare to Pinterest
Labels: Fantasy, Hordes of the Things, HOTT

Each player represents a squad from the 24th Mobile Infantry "The Wyverns". You have been recruited following Sky Marshals Dienes request for volunteers to combat the Arachnid treat.

The campaign begins in orbit around Alpha Fennell one of the outer colonies, SICON has identified a concentration of Arachinds, Fleet Orbital bombardments has degraded the bug prescence and it's now time to put boots on the ground and wipe the bugs off the planet. 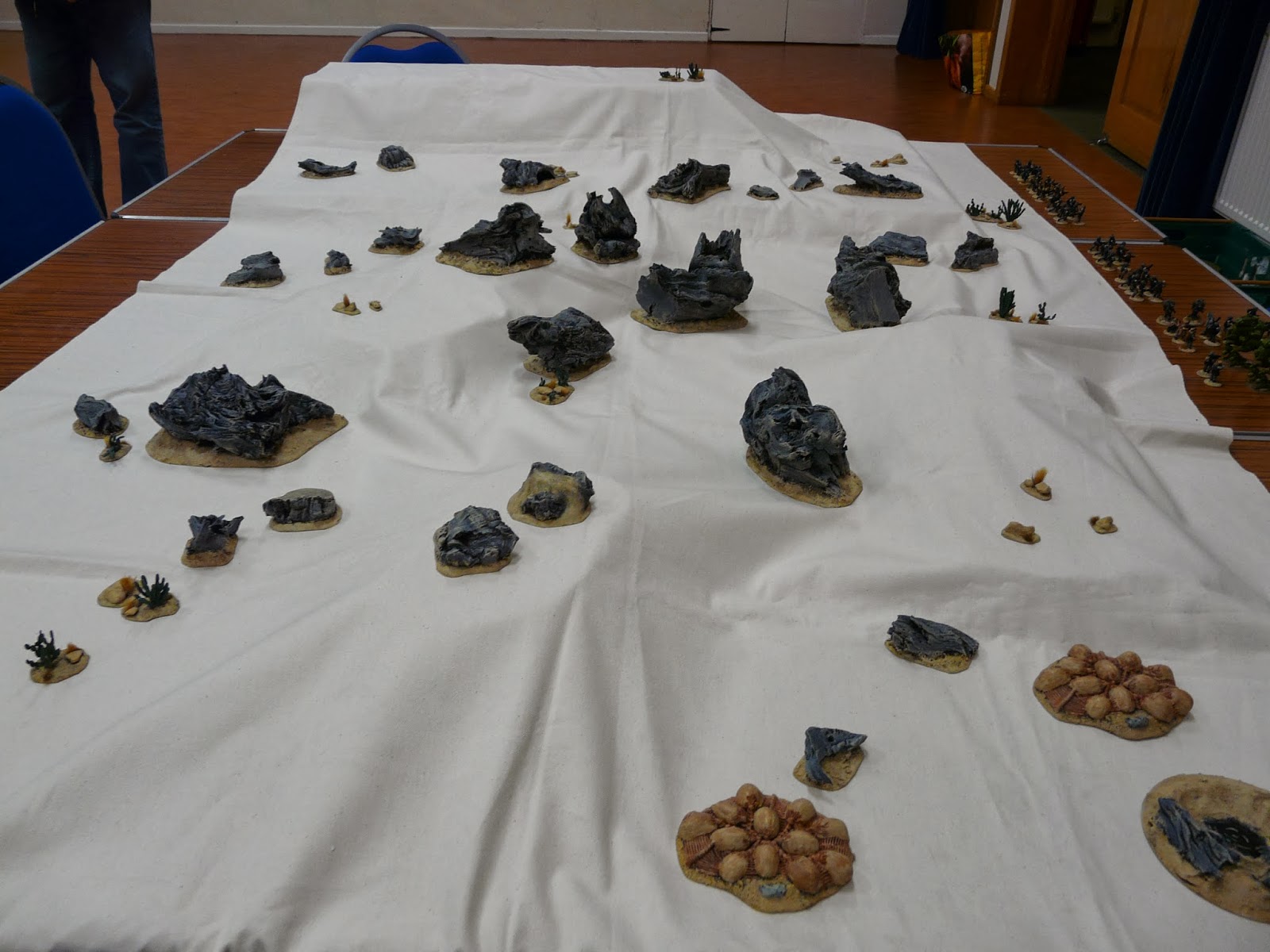 MI your orders are to kill anything that has more than 2 legs, push further forward clearing the landing zone to create a perimater and destroying bug central at the far end of the table. 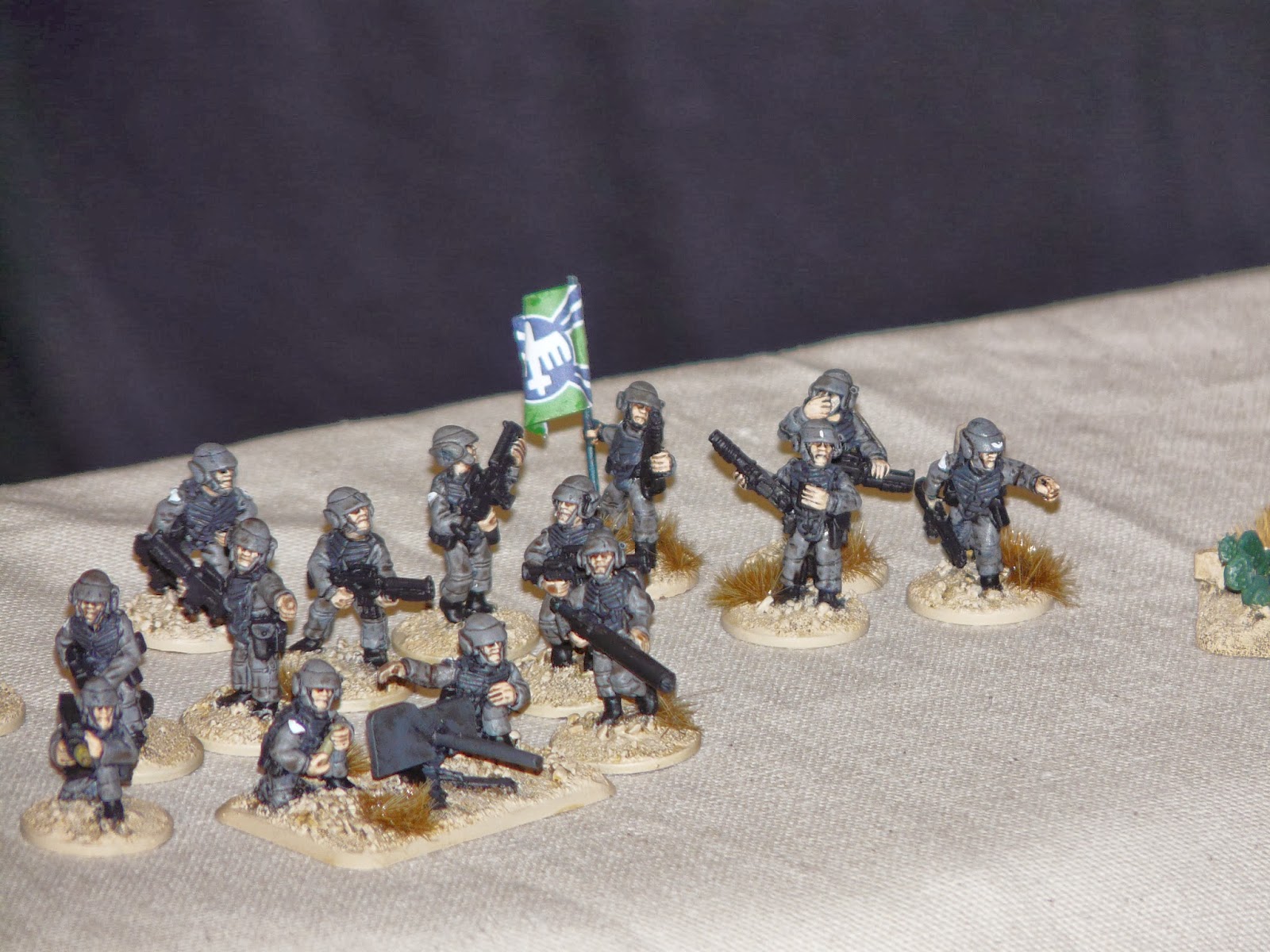 5 Players step forward to clear the beachhead, The Wyvern Warriors and Deacon's Destroyers take the high ground over looking the battlefield as other elements push through the centre. 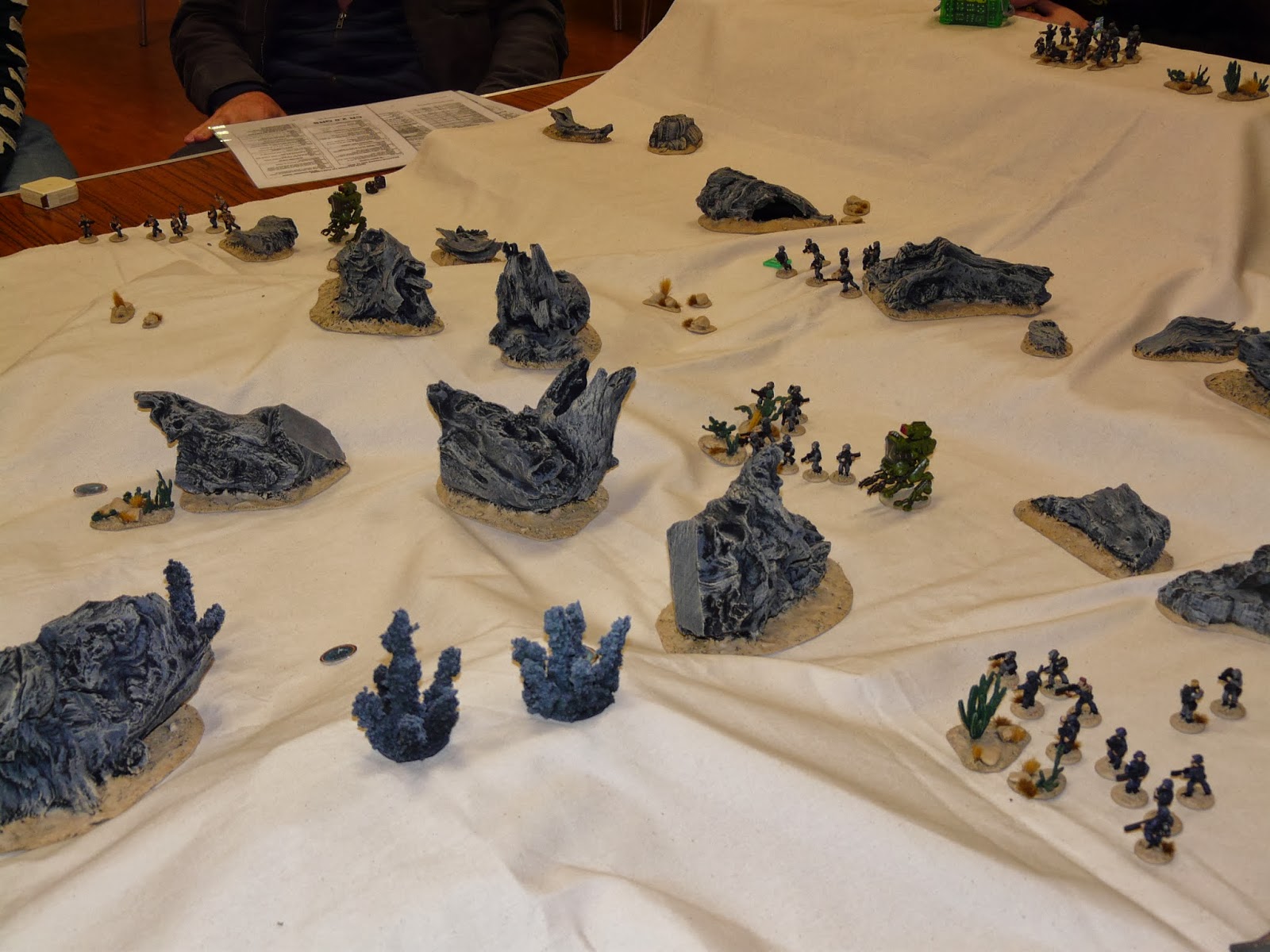 Sensors pick up movement to the front of the MI, the sneaky bugs are attempting to tunnel beneath the advancing squads, a couple of well placed rocket rounds are enough to collapse a number of the tunnels, so far so good and no bugs in sight. 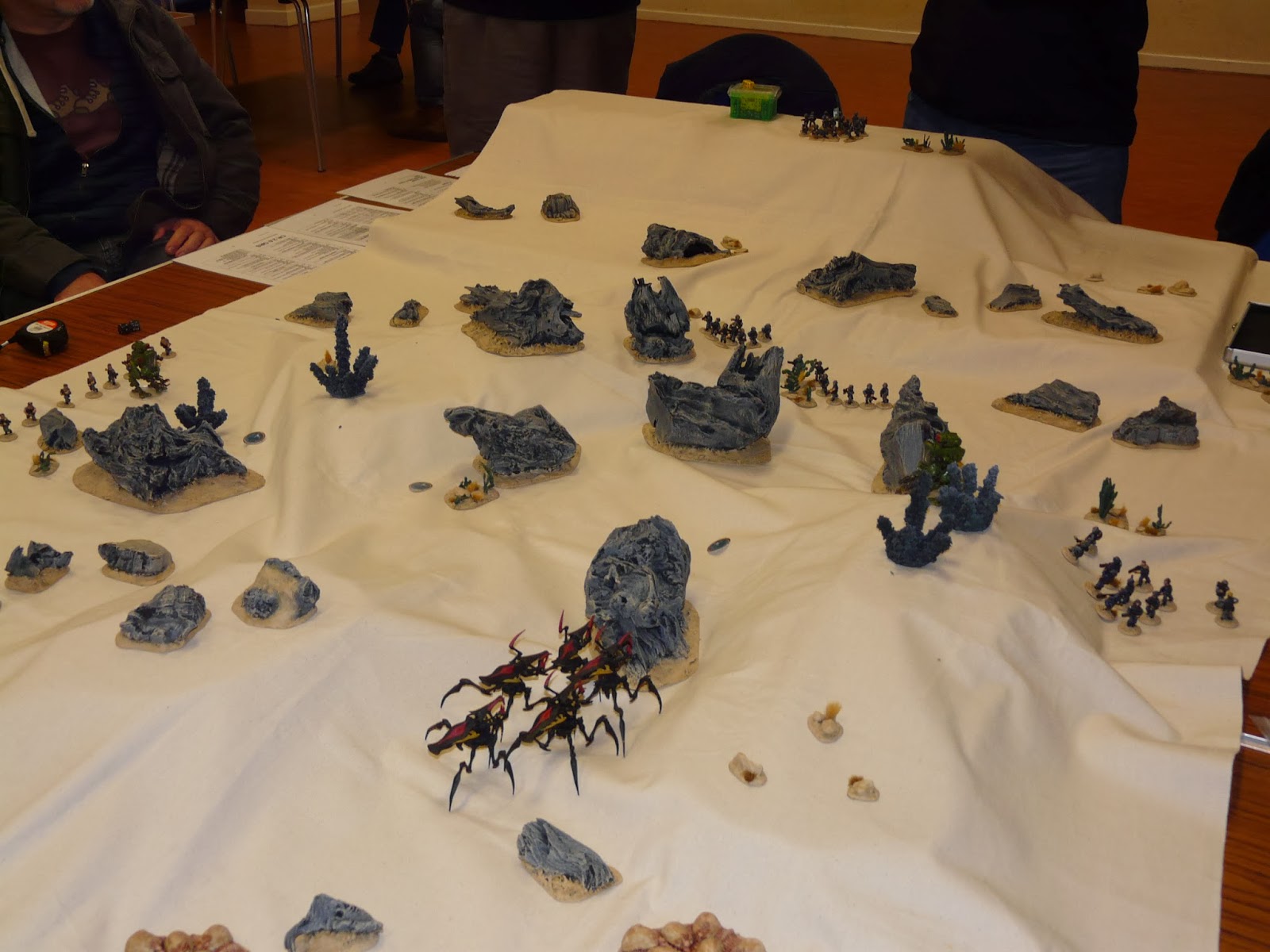 The MI press on, Baldwin's Bastards - Fleet Landing party take the right flank whilst, Nico's Roughnecks the right and the Luck Devils push straight down the centre supported by Deacon's Destroyers, the first bugs appear on the table rushing towards the advancing MI. 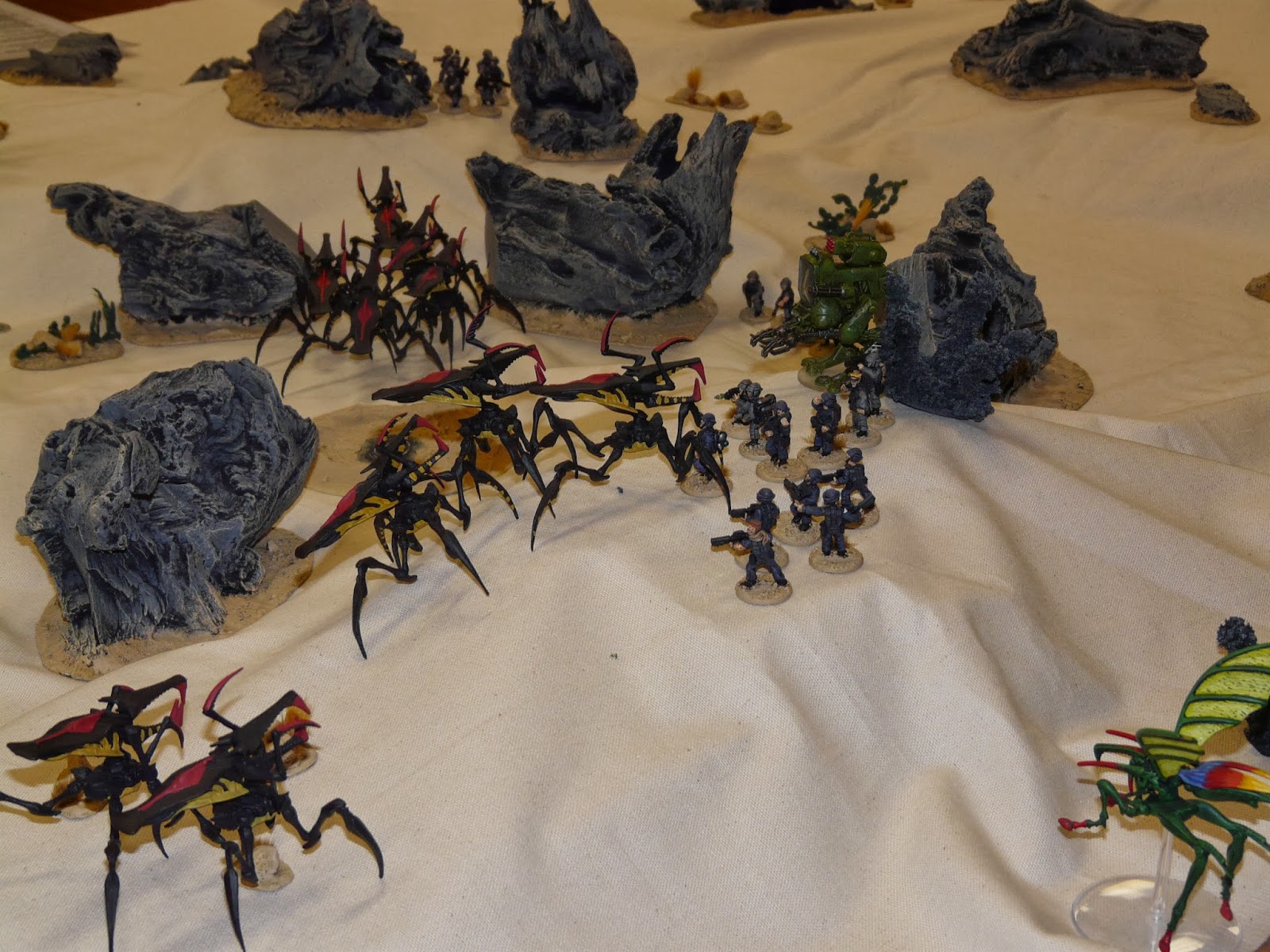 BB's secure the high ground, which prompts an immediate bug response with a bug hole breaking to the right and fliers enter the table sweeping down on the Fleet landing party.
It becomes a shooting gallery as all players light up the bugs looking to amass points..... 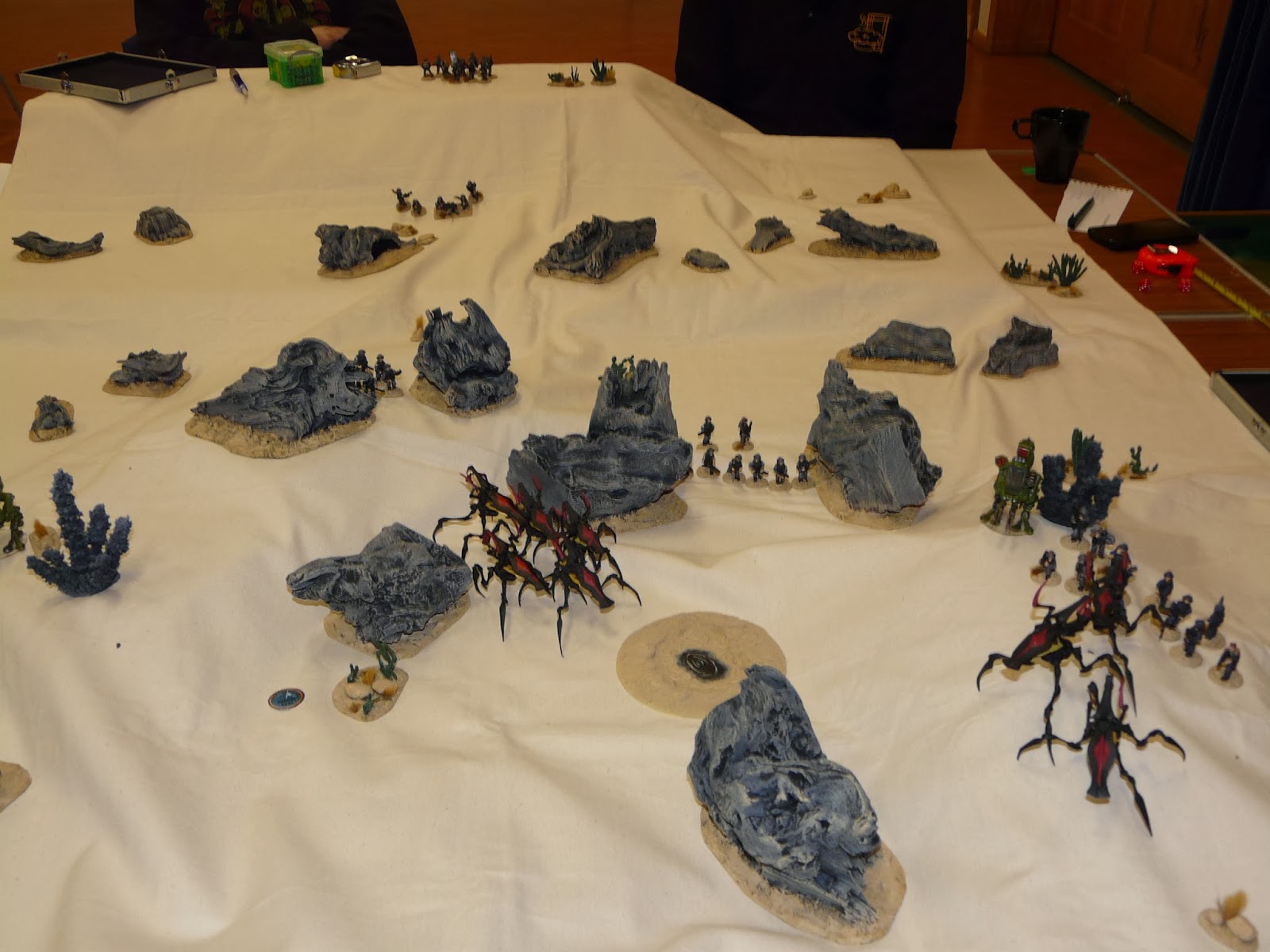 The Lucky Devils poor fire into the recently discovered bug hole and send a Marauder  unit to support Baldwin's Bastards who between them make short work of several waves of bugs. 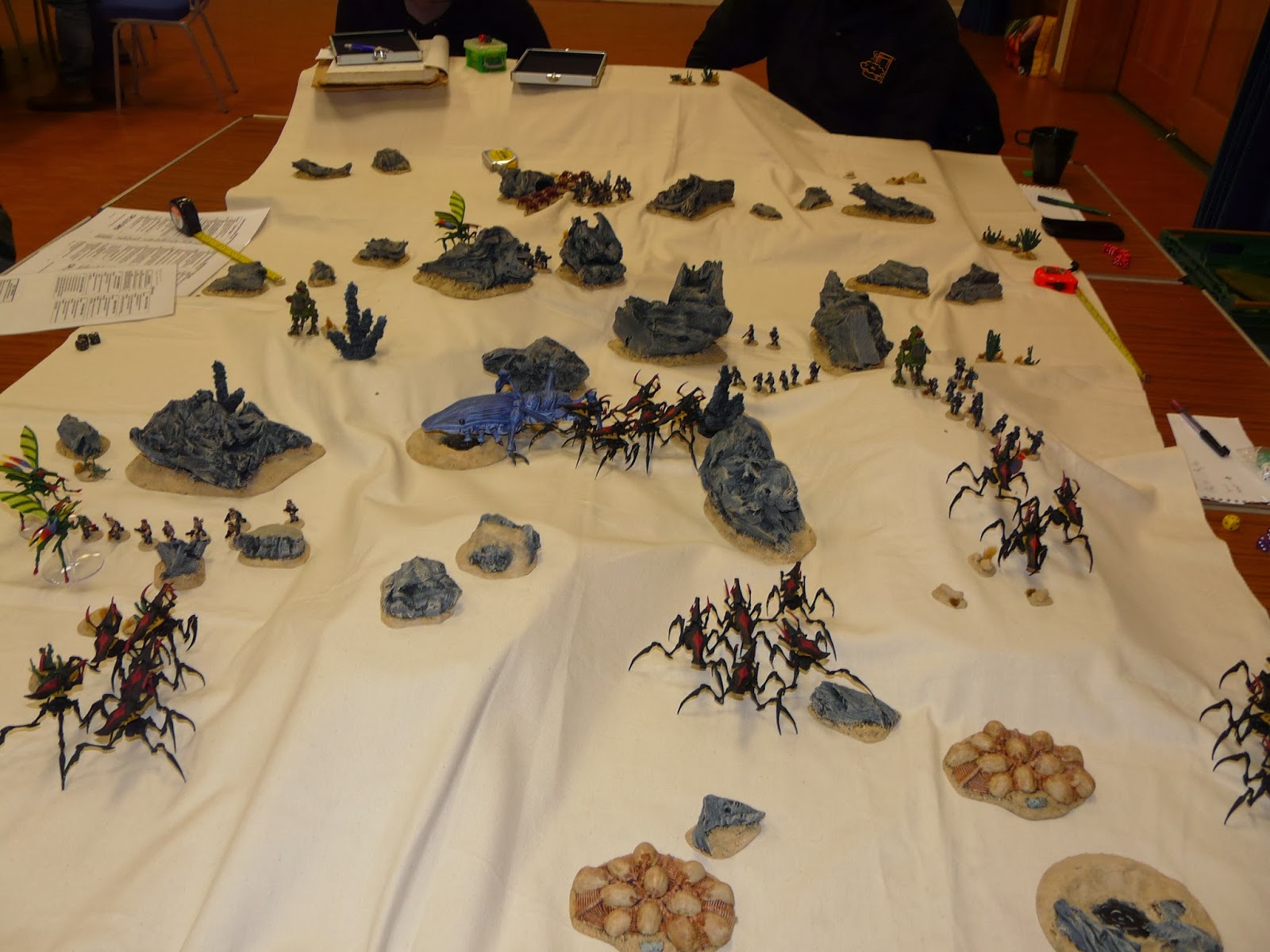 Things are really hotting up now, a second bug hole opens up, with the Arachnid ace card - A Tanker Bug !!!!! But a poor initiative throw gives the MI the drop, players rush forward eager to seek the prize of 250 points for downing the beast, Deacon's Destroyers inflect several hits on it's harden shell before the Lucky Devils inflict the final blow, the Marauder Unit sriking home with several rockets.

Meanwhile in the rear Cliff Mites rush out of the rock formations only to be beaten back by rifle fire and flame throwers, giving the Wyvern Warriors some valuable points as Deacon's Destroyers clen up the rest to add to their tally. 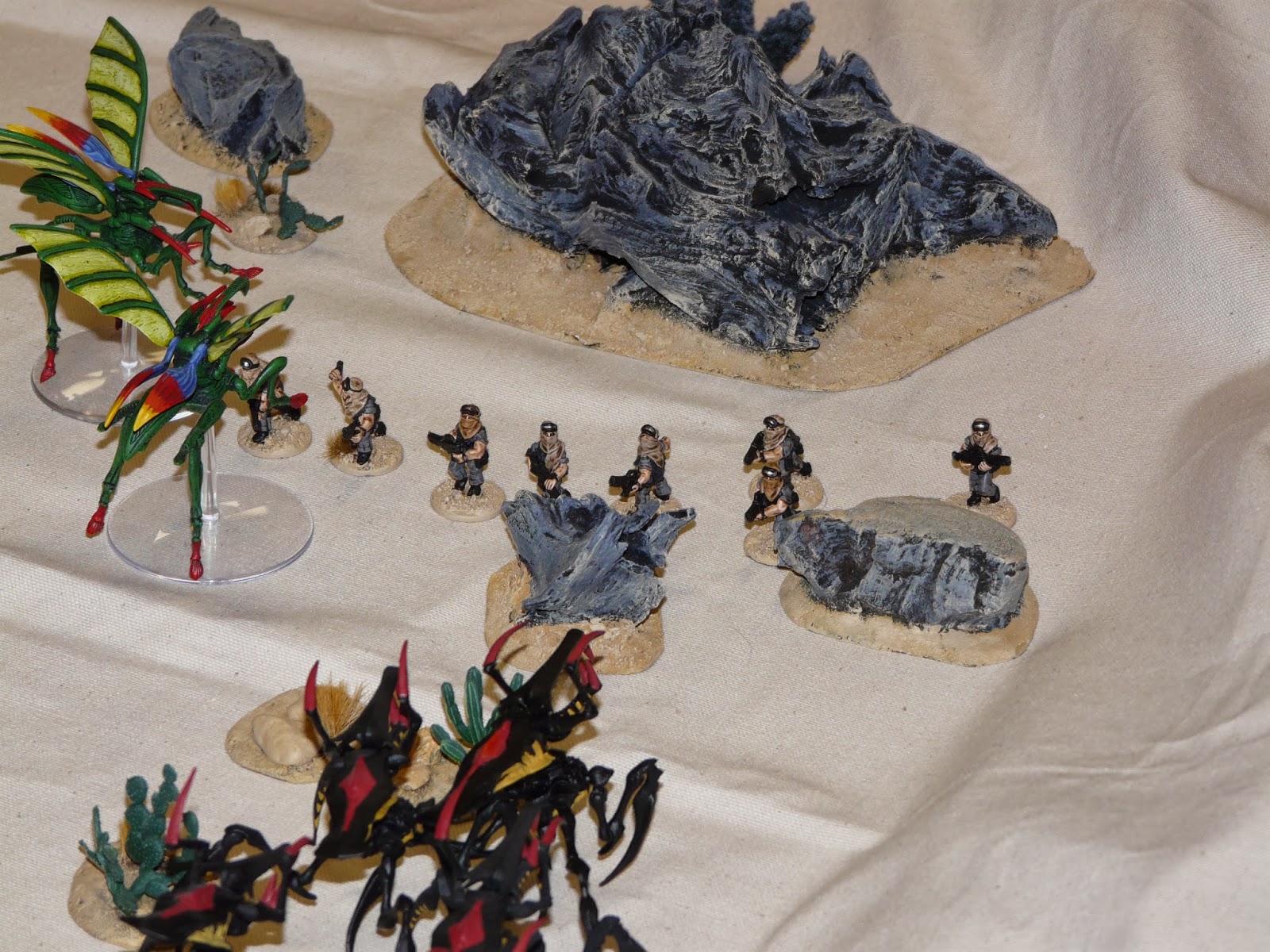 Meanwhile Nick's Roughnecks advance steadily down the table, destroying several waves of bugs and beating off several Hopper attacks. There Rep 5 Pathfinder status being the difference in a number of tight encounters. 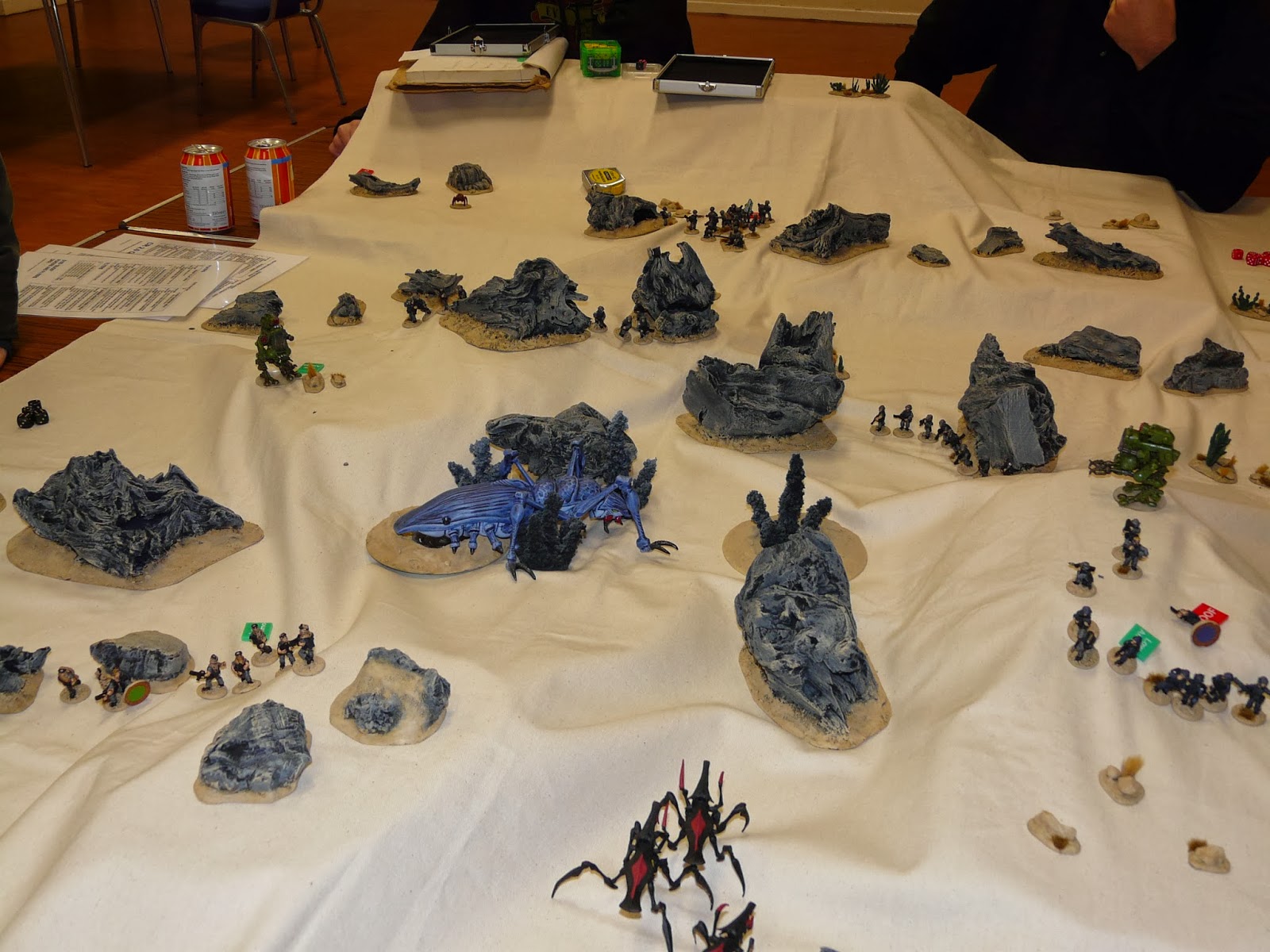 As the mission draws to a close, Baldwin's Bastards have lost a number of troopers and are dragging their fallen comrades from the front line, Nick's Roughnecks creast the hill but are out of grenade range to destroy bug central, which gives an opportunity for the Lucky Devils to seal the hole and bring the game to a close.

A great first encounter with others players signing up to get in on the action.
The bug's suffered from a number of poor initiative rolls, which gave them MI the drop on them on several turns, two random holes appeared but when the location was tested for they were both off table.

Let's see how the MI get on when Mission 2 is rolled out - "Expand the Perimeter"
Posted by Stuart S at 14:35 4 comments:


The problem with many campaigns is you end up waiting whilst one player becomes available to play a minor engagement, meanwhile the initial enthusiasm of others soon wains whilst waiting for a game that involves them. I must have started several over the years with very few reaching a conclusion unless all involved are fully committed.

So with that in mind I thought I would try something a little different for the latest Wyvern Wargamers - Starship Troopers Campaign allowing players to come and go as they see fit, but with the outcome of each scenario influencing the next type of mission, victory will reward players with an offensive mission, defeat and MI start to have to defend.

On the first game each player starts with a base of 200 points, but may add to that total from the troops I have painted to date, in the full knowledge that the more assets they purchase, the greater the number of bugs they will face, I created a web page so each player can see just what is available, which is found on this blog, which will also detail the scores and missions under taken so far.

After each mission each player is rewarded with additional points for kills inflicted, but penalised for any losses, the player starting with the most points is the CinC on the day and takes the lead in terms of mission strategy.

If all goes to plan, players can join in or drop out in the full knowledge that they will always have the points they have amassed so far. In theory the games may involve on one or two players with a small number of points or several players where it becomes a serious encounter.

Each player represents a squad from the 24th Mobile Infantry "The Wyverns". You have been recruited following Sky Marshals Dienes request for volunteers to combat the Arachnid treat.
Sunday night saw 5 squads take to the field with victory going to the "Lucky devils" who take an early lead with just under 600 points to show for their efforts.... Full AAR to follow. 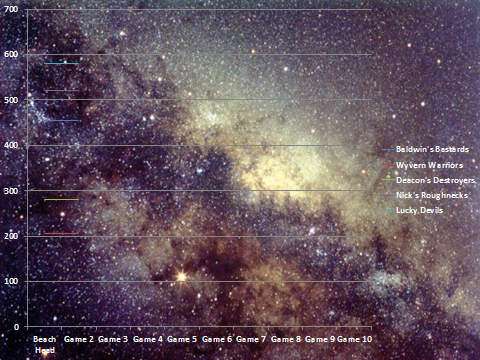 So much for just using up stuff stored in boxes from projects that I never quite got around to finishing....
With my self imposed 3 month deadline about to expire for the Starship Trooper Project, I thought I woud take the opportunity of a few more packs from 1st Corps, from their Colonial Troopers range. 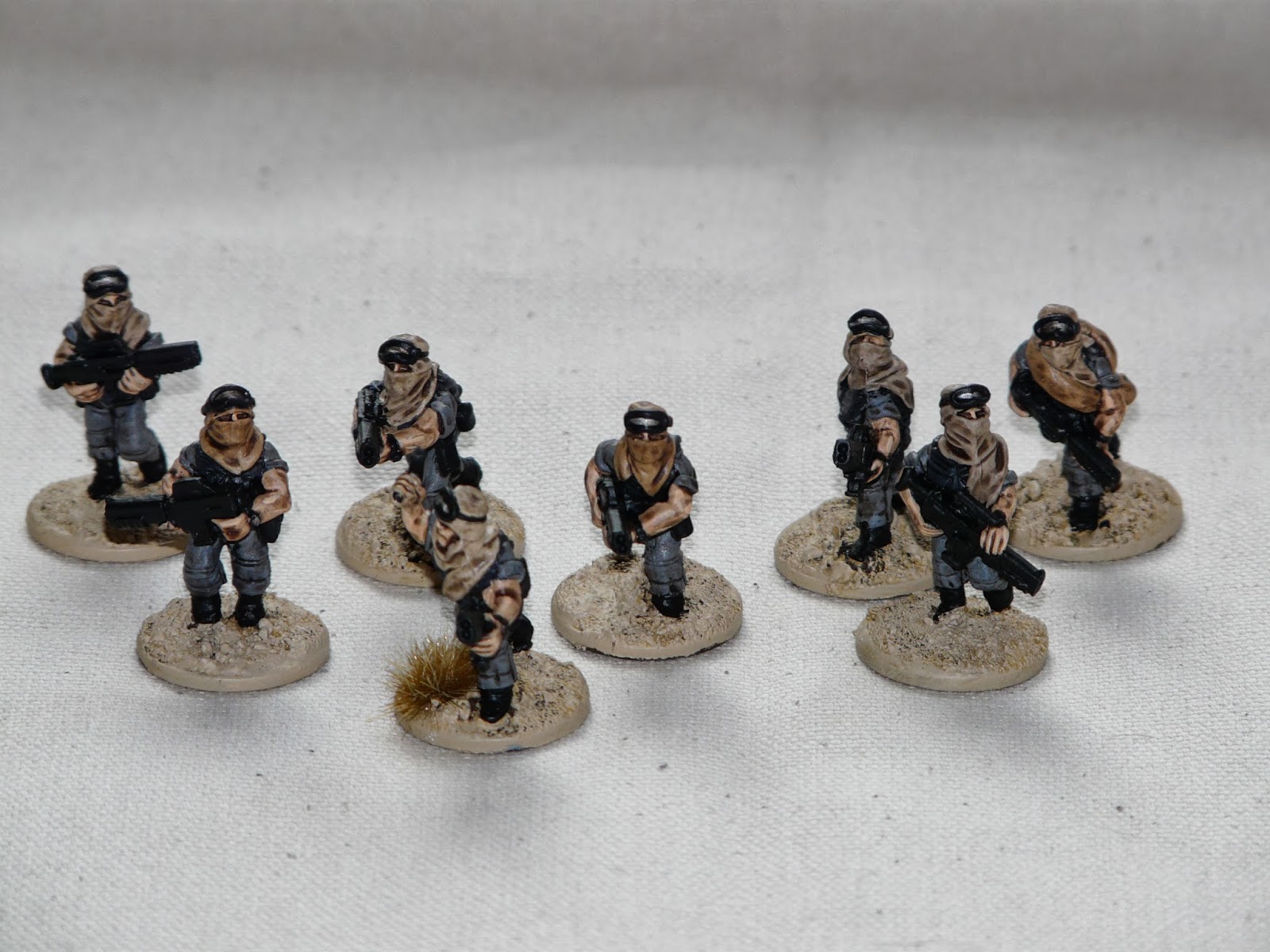 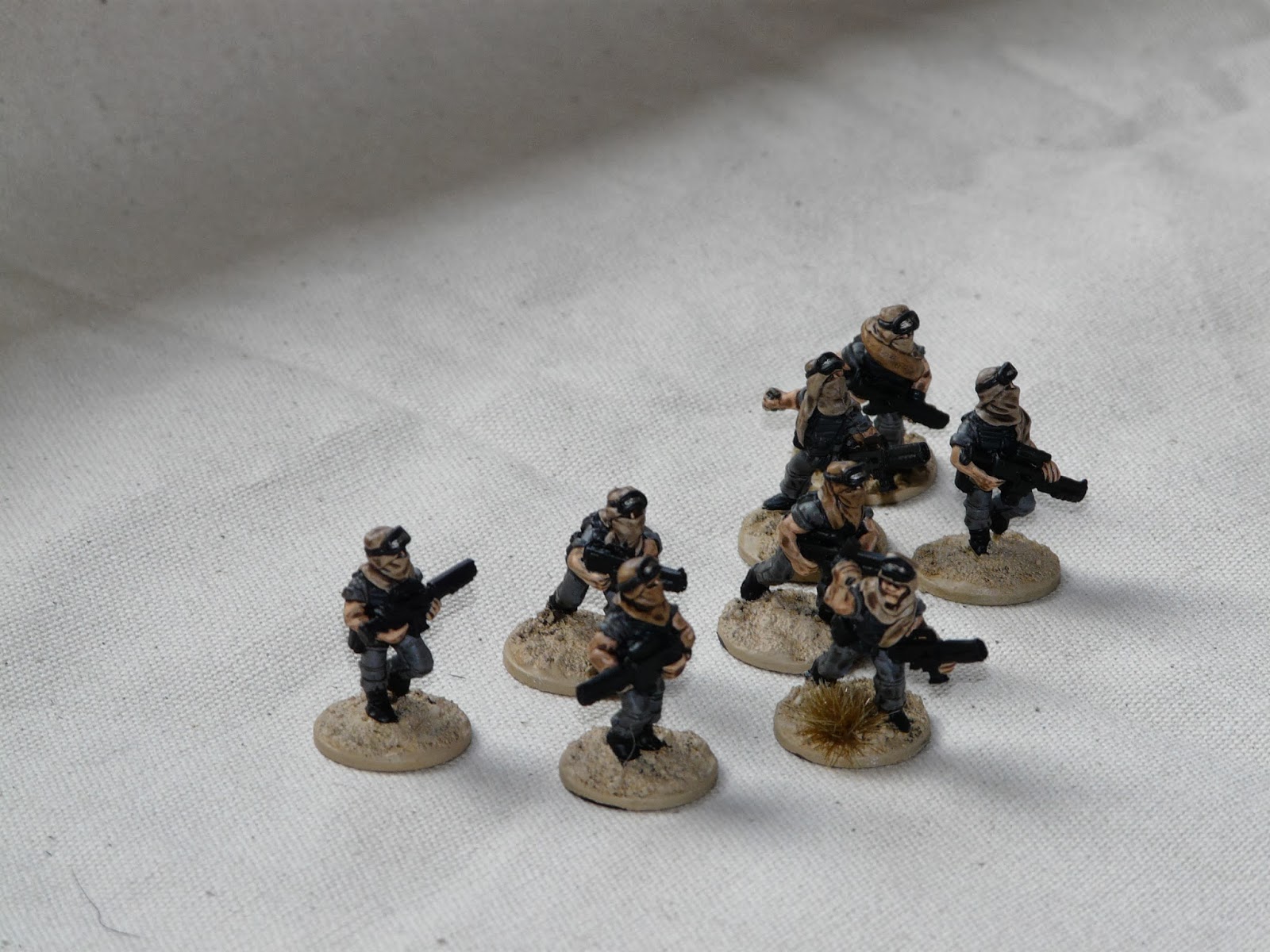 I figured that these recon troopers would be suitable to represent a Mobile Infantry Pathfinder section. Trained and equiped to be the elite of the Mobile Infantry, they are often tasked with ranging ahead of the landing zones to reconnoitre enemy dispositions.

Under the campaign rules there are 8 men in the section, each armed with the Morita assault rifle, Frag Grenades they lack a support weapon like their regular counterparts but are a Rep 5 rather than the regulars Rep 4.


With 5 Infantry sections now complete, It was high time I added an addtional Field Headquarters, to give the MI a little more flexability, it also allowed me to use up the last of the spares. 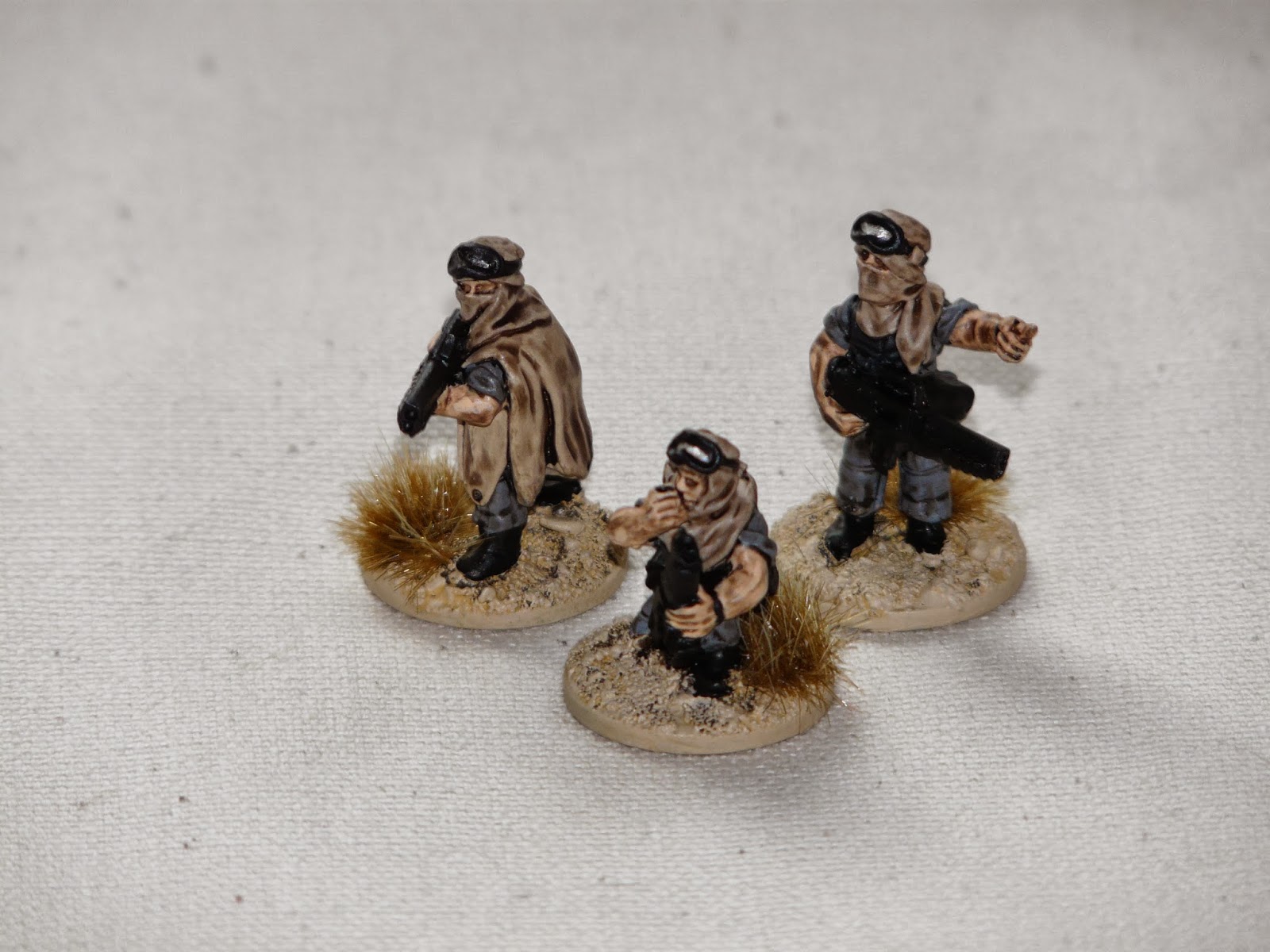 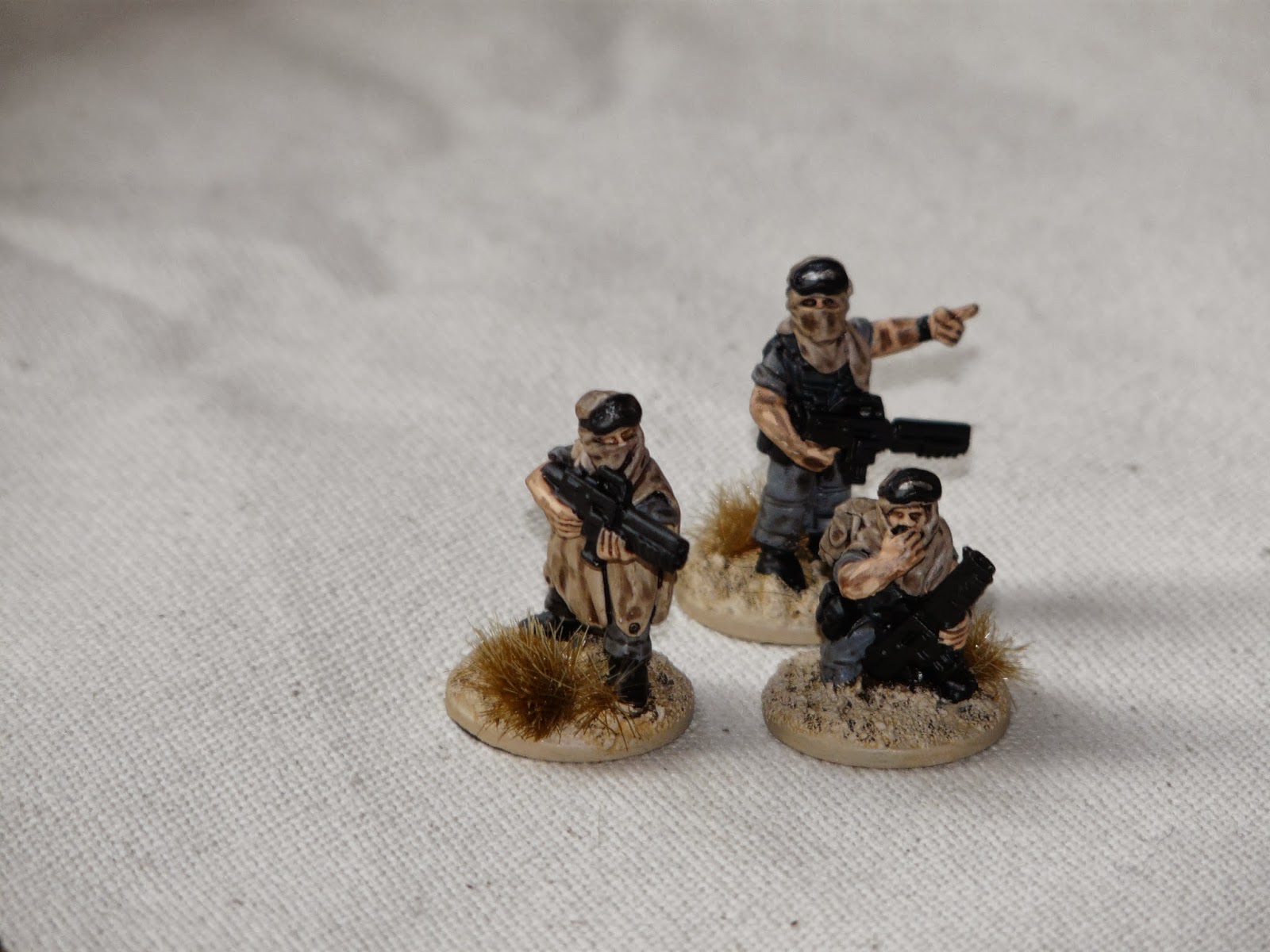 Field Headquarters is made up of a Lieutenant, his Radio Operator and a Sniper.


Sunday night at the Wyvern Wargames club is the offical launch night with at least 6 players looking to kill bugs and become citizen's stay tuned if you would like to know more.
I just hope the first outing lives up to expectations........
Posted by Stuart S at 10:55 3 comments: