As part of a future project I wanted to give Lord of the Rings rules a try, despite being a gamer for over 20 years I had never played them and was looking for a set of skirmish rules that could accommodate plenty of figures, with heroes and leaders - more of that in future posts.

The scenario was a simple one, a homestead in the hinterland was attacked by a Goblin and Orc war band with a view to stealing the sheep herd..... the valiant defenders had to hold on and protect their live stock. 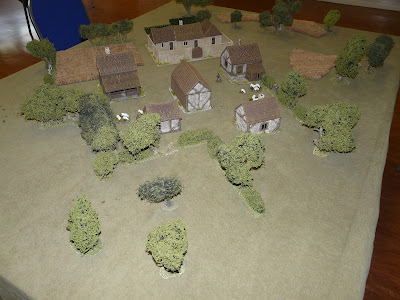 The farm and surrounding countryside before the Goblin horde descend. 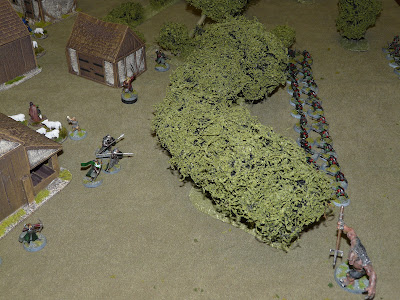 The defenders rush to the southern tree line as the Green mass attack, archery fire proved to be in effective, resulting in very few casualties on both sides, the troll can be seen at the bottom right, which was to cause so many problems. 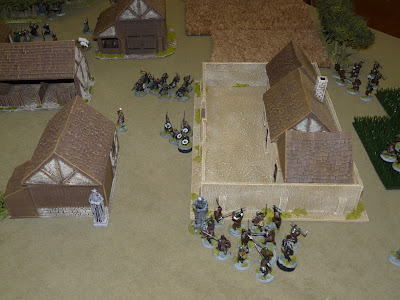 To the North Orc's skirt the walled compound looking to gain entry to the farm. 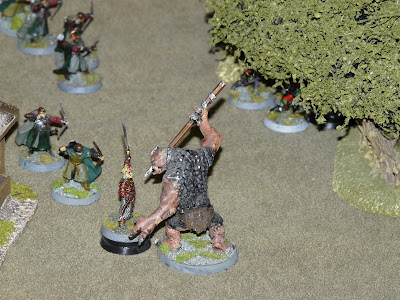 The good guy's are no match for the size and bulk of the troll. 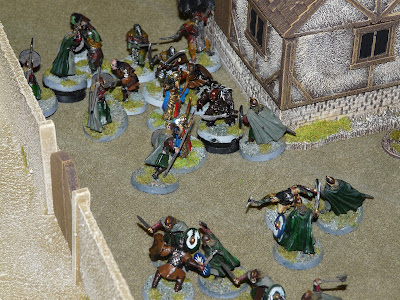 In the center of the village the Rohan engage the Orc's. The Captain of the guard killed several of the Orc attackers but they were unable to stem the tide and stop the Orc's breaking into the village. 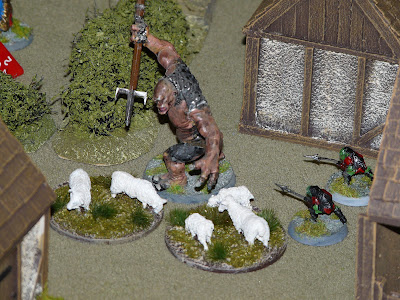 With the defenders pinned by Goblins to the South and Orc's to the North the troll was free to pick up the flock and wander off unmolested.

The rules flowed really well, but will need a few tweaks to fit with the project I have in mind, all in all a good evenings entertainment.

Club night over at the Wyvern Wargamers and another game of bash the Turk....

Well tonight things would be different. 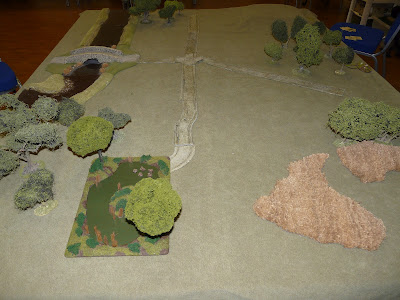 Kaptain Putain's orders were simple, the Ottoman Turks front line had been broken and he was ordered to press the advantage securing the Bridge at Balak, advancing from the right hand side of the table all was quiet with not a sole in sight. 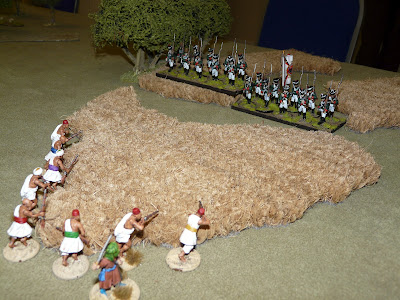 2 Sections of Russian line infantry advance through the wheat field, when they are ambushed by a section of Ottoman skirmishers, the Arabs fire early inflicted limited shock on the advancing Russians. 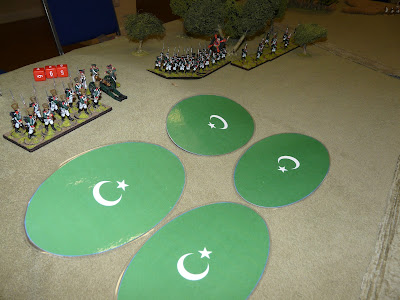 On the far north a Russian section passes the crest of the hill revealing 4 Ottoman Turk blinds. Lets hope the luck of the dice is with the Ottoman's this evening. 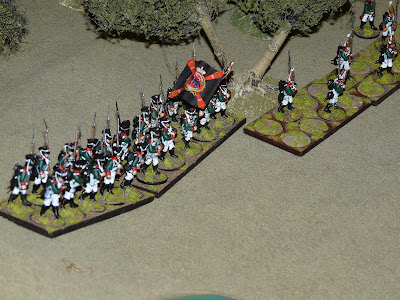 Meanwhile in the center the Russians advance through the open woods. 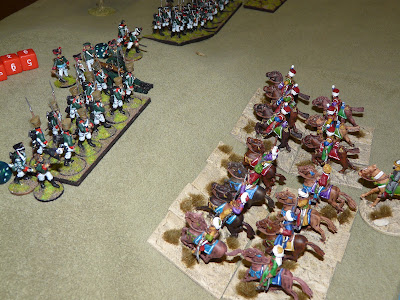 The Ottoman blinds are revealed and by gambling all my best B & C blinds, I hope to turn the Russian flank, Putain orders a light artillery piece to support the right flank, they have to little time to unlimber the gun before the Ottoman cavalry closes with the isolated section. 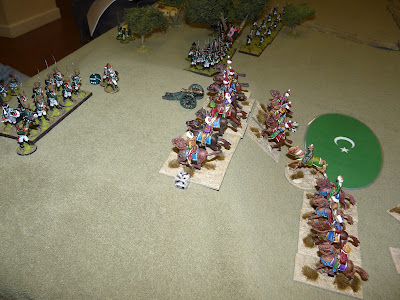 Whilst  a number of the Ottoman Cavalry are driven off, they inflict enough casualties to force the Russian's section backwards and causing the gun crew to flee. 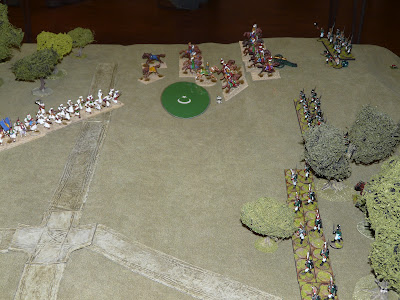 The Ottoman infantry are spotted in the western woods and advance with all haste towards the Russian center. 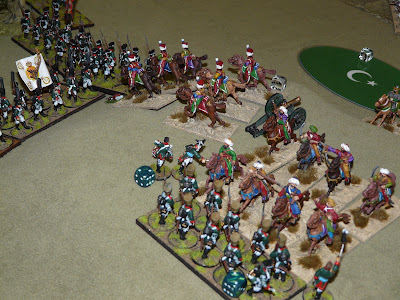 Meanwhile the Ottoman cavalry follow up on the shocked Russian section, beating them soundly and driving them from the table, but their valiant action had brought enough time for Putain to swing his reserves on to the right flank.
The Cavalry were spent and the infantry too far away to pressure the Russian Center.

OK so not quite that different from the previous encounters and the Ottoman's still lost but the Cavalry got to play a reasonable part, over running the guns and an Infantry Section,
Still plenty more to paint and each week I feel they are getting better and one day they will win the field.

Real life has got in the way recently, but a bank holiday and the opportunity to take put some paint on lead, we have been playing a lot of Sharp Practice recently over at the Wyvern Wargamers and a number of event cards call for units to be resupplied, with this in mind I thought I would paint up a number of camels that have been on the to do list for several months.... 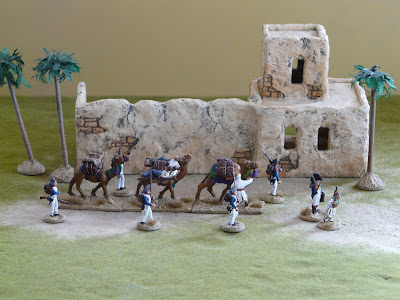 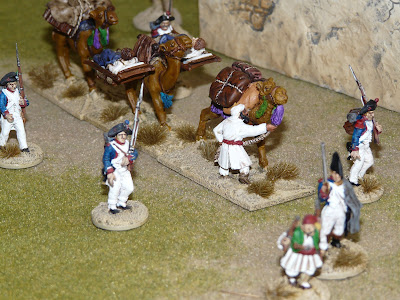 The lead camel and handler is from Black Tree's Crusade range, but if you can get past the shield hidden amongst the various supplies it is a perfect addition to the French supply troop, if anyone asks the French have stolen it from the Mameluke's. 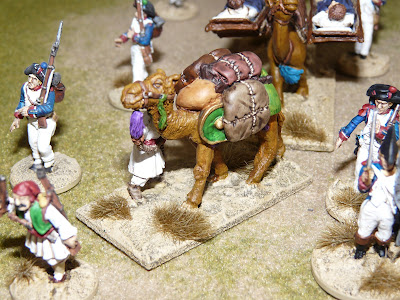 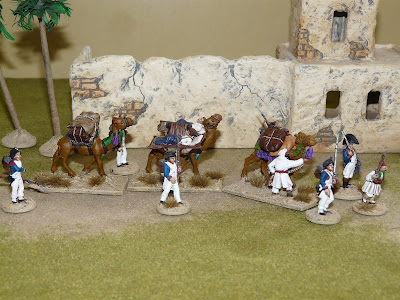 The second two come from Redoubts Sudan range, slightly larger than the Black Tree casting and the camel hide is a little smoother, but the packs are good and the casualty camel makes a useful change from the usual pack animals.

Next up a Ottoman Command element for the Janissary's.