And so the last post of the year....
This is the last of the Russian Foot Infantry for The Russo-Japanese Project unless of course Markus over at Tsuba Miniatures produces extras next year, being a sucker as I am for shiny new models. 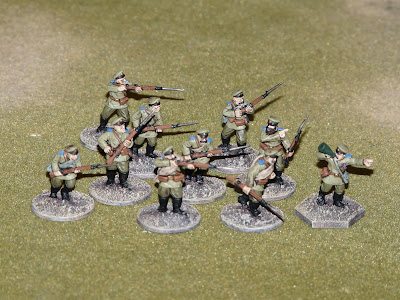 These are from Musketeers WW1 Range but fit in quite nicely with the Tsuba RJW infantry and provide a little more variety to the Russians. 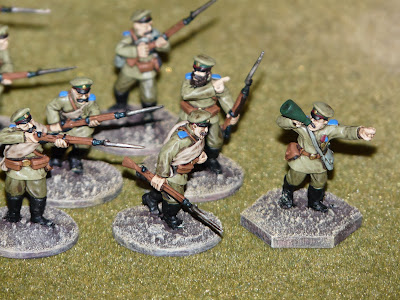 I particular like the officer with the loud hailer urging his troops on, now he must be a Status II Big Man, I now have 10 Russian Sections more than enough for most regular games of Mud & Blood.

And now for something completely different....

Back in November at Warfare a few of us over at Wyvern Wargamers were tempted into the excellent 7TV rules after playing a "Blake 7 "ish skirmish game.
The rules seems to be perfectly weighted towards low level skirmishing where the lead characters take centre stage recreating the sci-fi drama's of our childhood.

It prompted me to dust off my partial collection that has been held in storage for several years - which is crying out to be adapted for the 7TV rules - Flash Gordon......

I started this project some 15 years ago but a lack of rules and a complete figure range consigned them to the box at the back of the wardrobe, most of the range was from The Wargames Supply Dump -Dick Garrison range with other figures drafted in when they had the right look and feel.

Languishing in the unpainted draw were two blister packs from what was the Superfigs range originally available from Westwind, which I planned on using as Shark Men. This could be their window of opportunity to finally appear on a table top.... and with free time over the Christmas break I give you the first offering. 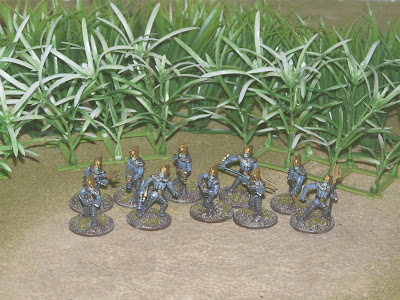 Shark Men ready to step forth from the sea to do Ming's bidding. 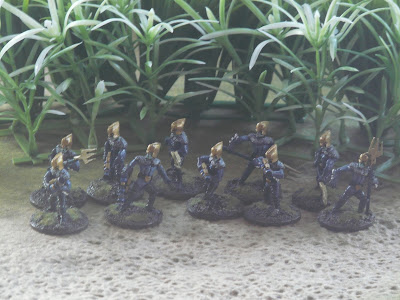 I misted the lens to give an underwater feel.

The Shark Men live in an undersea kingdom on Mongo; they're ruled by King Kala.
In the 1936 Flash Gordon serial appearing in several episodes, the Shark Men capture Flash Gordon and Dale Arden on the orders of Ming the Merciless. 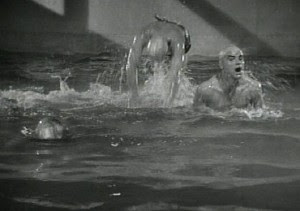 A slow month on the painting front and with Christmas just around the corner I am running the risk of missing my painting targets for this year, but I did finish the Naval detachment for the RJW project, based on the crew of the Battleship Retvizan who helped defend Port Arthur.
The figures are from Brigade Games RCW range, but the Infantry fit in fine for the earlier period you just have to ignore the Machine pistols on the officers. 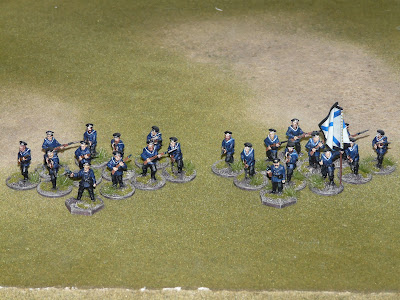 Two sections of Sailors with a Bigman each and Naval Standard 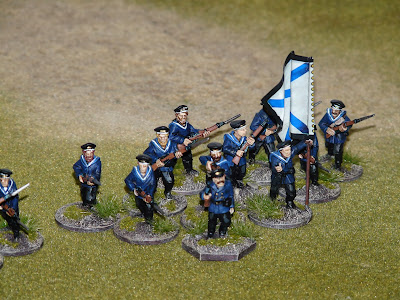 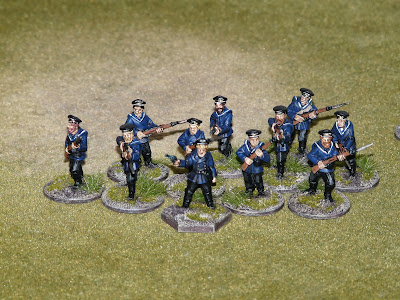 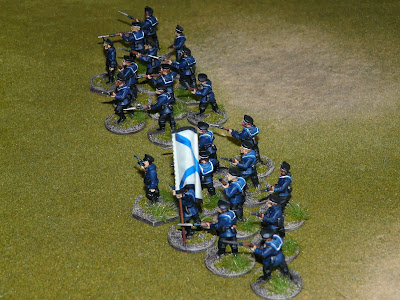 The Russian Navy rushes forward to plug the gap, I have used a slightly different shade of blue on their neck ties to identify them on the table top.

The inspiration from the guy's at Osprey.
Posted by Stuart S at 10:28 9 comments:

It must be two years since the Shroud Mages last took to the seas and it has to be said they performed as badly this time as in any other outing, or is it that the Orc's are their nemesis of the High seas?

Uncharted Seas from Spartan Games is one of those games you can throw on to the table in under 10 minutes, perfect for a club night or where time is limited. 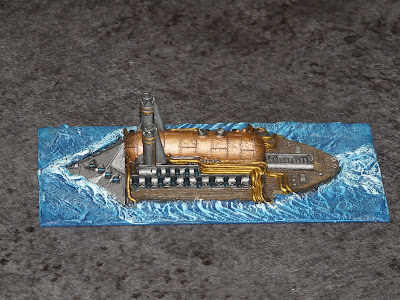 The Imperator - Intruder Class Battleship sets sail for the Orc fleet.
I took the trouble to sculpt the base with Green stuff, I am really pleased with the result, it probably took longer to complete than the actual ship, but it also adds a little to the playing piece which stops it shifting on the table top. 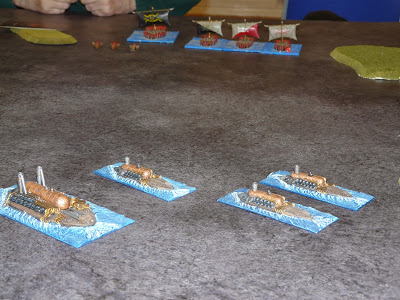 We played the 1st Scenario from the rule book, which allowed each of use to use the full starter packs, of 6 Frigates, 3 Cruisers and a Battleship. 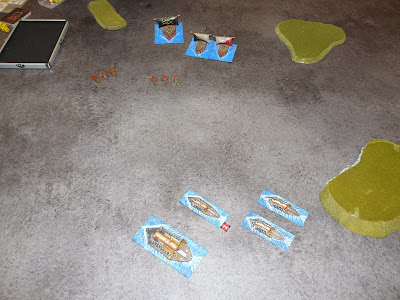 The Orc's rush straight in, all their fire power massed at the front, I had to turn to port to bring my more numerous guns to bear, by which time I was already taking hits. 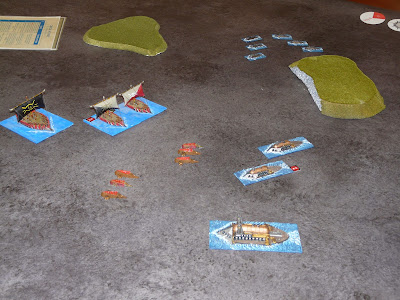 Early exchanges saw both sides lose a Cruiser, but the Orc frigates were closing fast and the linked fire from the squadron was starting to really hurt, my own Frigates I had deployed too far out and were struggling to get into the action quickly enough. 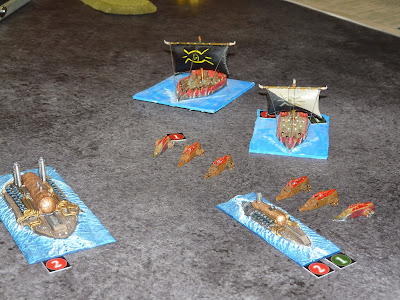 Another Two Cruisers slip below the surface, this would be a battleship face off. 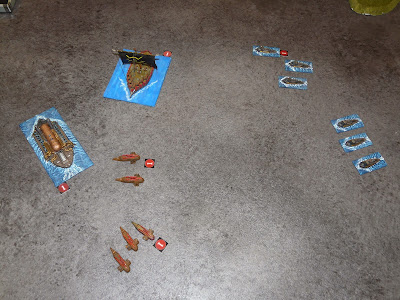 Finally my Frigates arrive on the seen only to see the battleship be sunk, the nasty little Orc row boats had succeeded in getting behind my Battleship and had inflicted a critical hit, jamming my steering and reducing my speed to next to nothing, with no guns in the aft and significant Hull points reducing my fire power the game was lost.


Aside from the loss - which must be now six games to nil, it was good to dust off the Dwarven fleet, somewhere in a box in the garage are 4 or 5 more ships, they may even make the project plan for next year although I may steer clear of flaming Orc's......