Christmas greetings and a brief update


With most of the family struck down with heavy colds and a Christmas Tree that would not stay up, to the point where the real tree, now completely devoid of needles was relegated to the garden and an artifical one purchased on Boxing day you would think Christmas Day was one to forget... 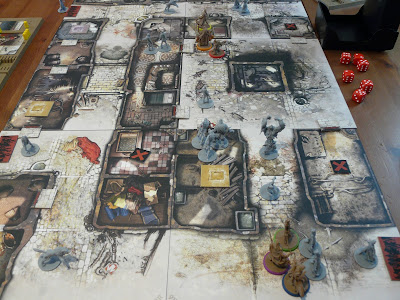 However it presented the opportunity of getting some family game time in with the family favourite Zombicide! Dosed up on cold remedies the clan set about dispatching the hordes of undead as we fought our way to the exit.

A new game entered the familiy stable this year in the shape of the Sheriff of Nottingham, a game of bluff and outright lies and fakery. This was a present from my gaming gang at the old company and it was the first opportunity to get it out of the box since leaving in November. 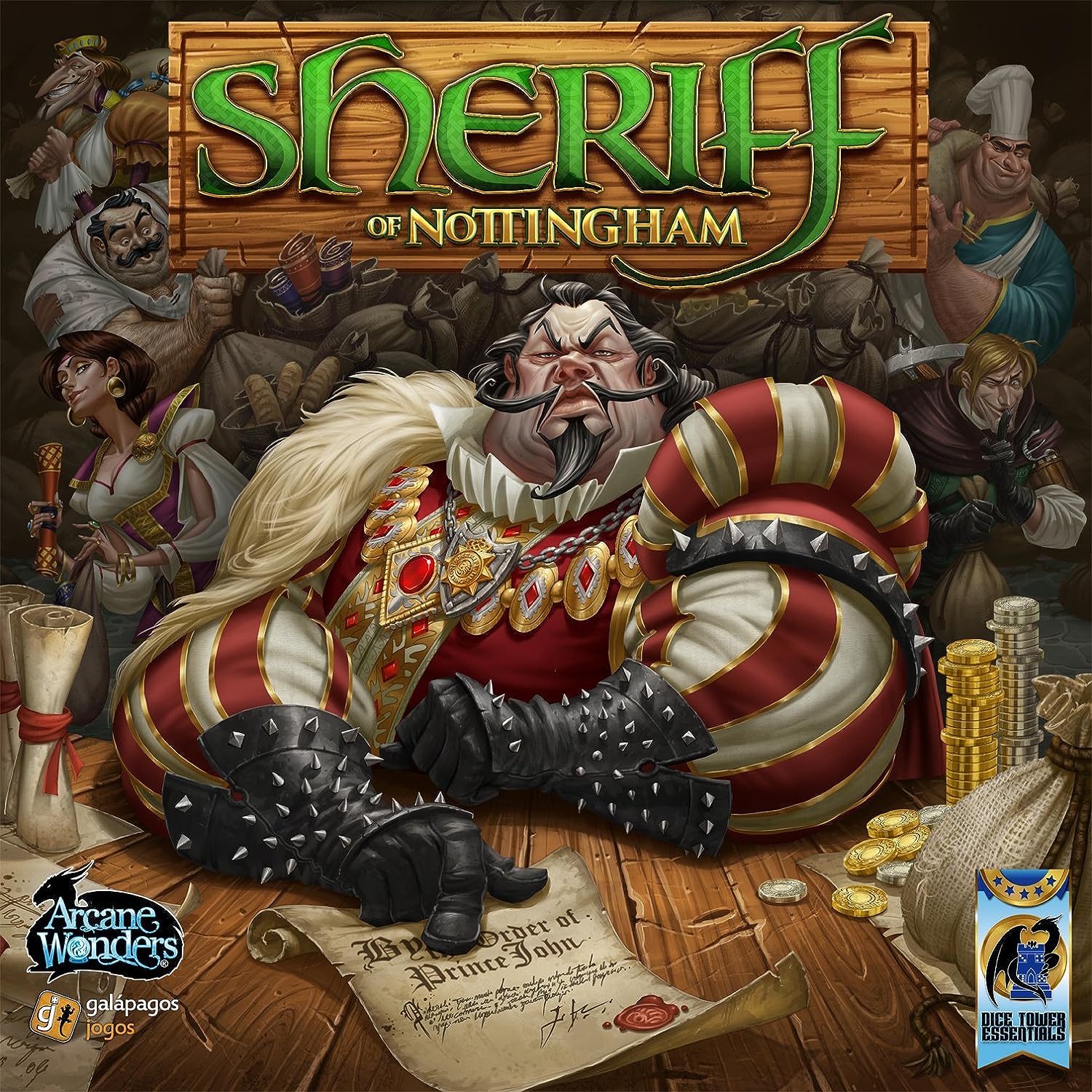 The guys had done a fantastic job of giving the front of the box a make over including my own face.
Thanks guy's bloody brilliant..... It's just a shame I could not share it with the rest of the workforce for fear of outing you all as gamers :-)
And no I don't see any likeness.... 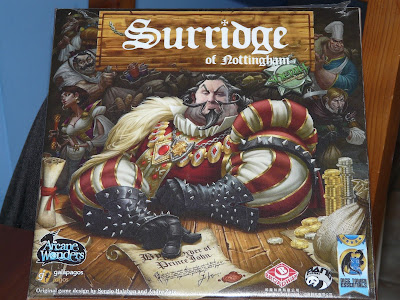 Each games last around an hour and half, the trick is to sneak enough contriband goods past the sheriff, whilst at the same time offering the occasional bribe to make it worth his while not to look in your sack.

With the requirement to tell lies why did I think for one moment that 3 teenage daughters would be any good at such a game.
Needless to say I have lost every game so far.

Meanwhile in last club night of the year, my good friend Dane, brought in his Mythic Battles Kickstarter. The game comes in three parts, setting it up, playing the game and then finding the right tray to put it in at the end..... OK so it's not that bad but it does require a degree of prep before the game, it has some lovely castings but where do you store it all? 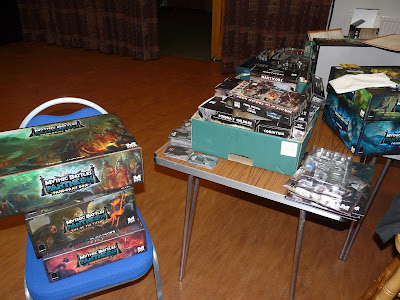 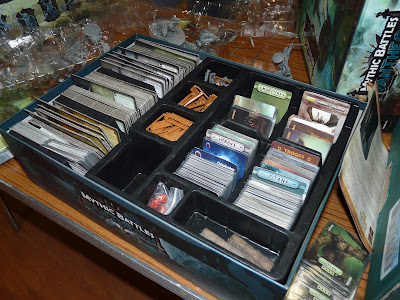 With our Gods and Heroes assembled we set off collecting the red gems, first to four wins and there are only seven available. 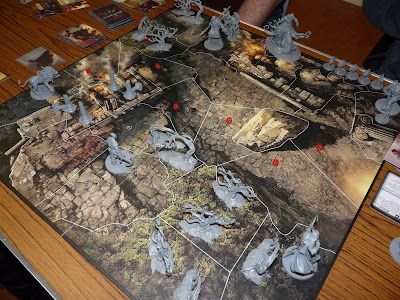 The game went down to the wire with the good guys falling at the final hurdle as Apollo was felled and the loss of a God resulted in a loss for my side. Definately one to play again.
Have a good break everyone - Next up the Annual review of 2017...

Finally another 6 Infantry limp off the paint table together with a much needed Big Man.
These should serve to flesh out the units bringing each up 8 figures rather than the 6 currently in play. 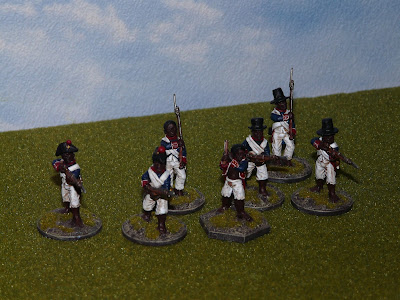 The Big Man is from Trent Minatures Insurgent pack and makes for a prefect low level leader, bare chested with his tunic open, cocking a pistol. 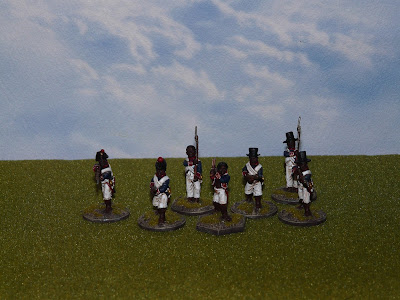 I also finished a couple of extra shock markers or loot tokens these were made up of a pack of pigs from Warbases animal range, which I figured they fitted in with the general feel for the period. There are several accounts of religious ceremonies being conducted before the slaves/insurgents went into battle. 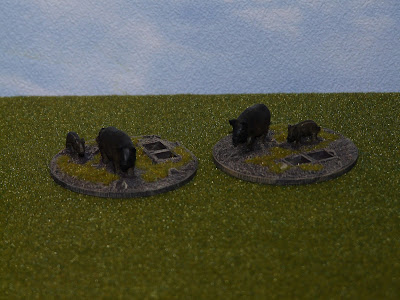 Antoine Dalmas who wrote about Bois-Caiman at the time states that a "kind of celebration or sacrifice" was held, in which "The religious ceremonies that the blacks practiced in slitting the pigs throat" he continued "the eagerness with which they drank its blood, the value in which they placed on progressing some of its hairs - a kind of taliman that, according to them, would make them invulnerable"

It feels like the perfect reason to paint them up and perhaps even some special rules for units who have drunk pigs blood? 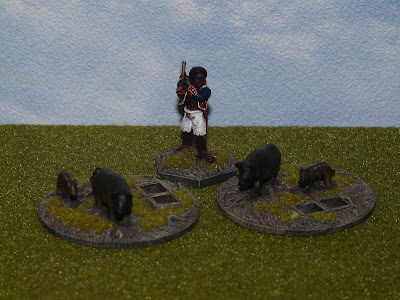 The Pearl of the Antilles - Haitian Revolution AAR #4 Hold the line.

Painting and posting has slowed to a trickle but hopefully the Christmas period will give me that free time to get juices flowing and some of the back log cleared.

Last weekend saw the Wyvern Christmas all dayer, we were a little thin on the ground but it's always nice to get in a full days gaming without rushing the end of the game with the usual what might have been discussion.

This years outing took us back to Haiti and a combined British and French Affair. 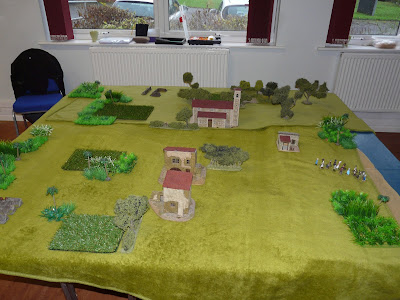 The slaves were revolting, several plantations were in ruins, the land owners and loyal staff had nowhere to go but the coast in the hope naval units would rescue them from the slave army. 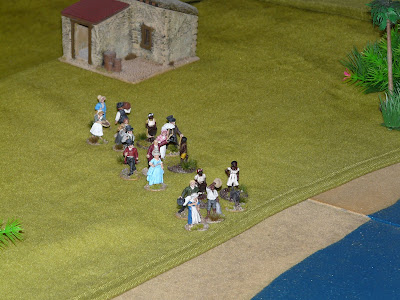 The civilians queue on the beach hoping that what remains of the French and British garrisons in the area would be able to hold back the slave army before the row boats could lift them off the beach. 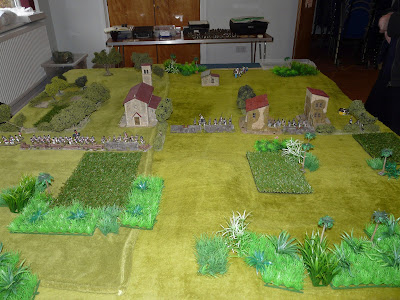 The idea for the game was split it into two parts the morning saw both British and French forces manning the barricades as the Haitian forces cam on in three entry points in a random order, but allied players needed to keep their forces largely intact as they needed to be the dominate force in the area once the slaves were put down. 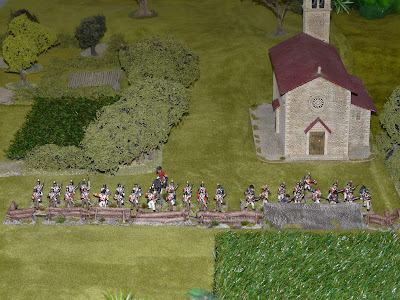 The British line their barricade awaiting the first wave of slaves to show themselves. 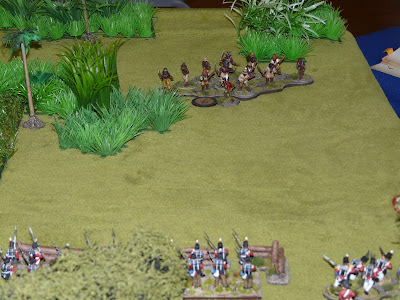 They did not have to wait long as the first unit out of the bag was 12 wallahs with big choppers, they charged forward and were met with a full volley which sent them running for the tree line. 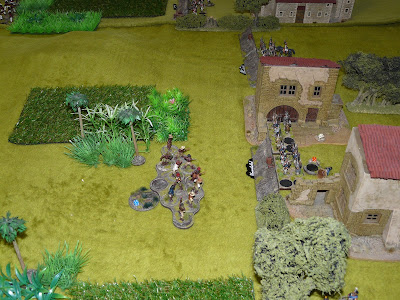 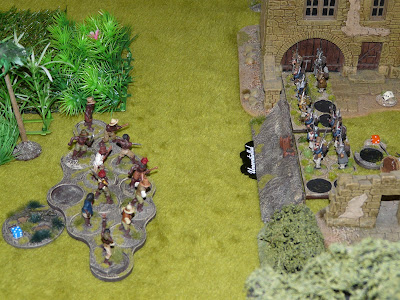 Meanwhile on the French side of the table they were having a worse time, slave skirmishers had somewhat surprisingly taken out a number of the French defenders including one of the officers who was knocked clean out, a unit of knife armed slaves got to within striking distance before being beaten back. 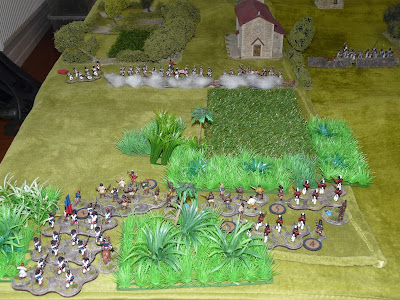 Meanwhile on the British front the bulk of the slave army had appeared and had begun to inflict a number of casualties on the defenders, but keeping good order the British, presented aimed and fired which slowing drove up the shock and casualties of the Haitian army as it failed to make any head way against the thin red line.

The morning came to a close with the defences still intact and the Haitians force morale sitting on a lowly 3. 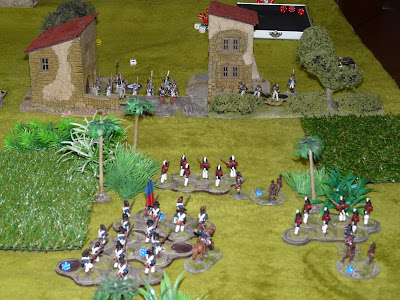 The afternoon saw both sides regroup and reposition themsleves, the British and French carried over their casualties whilst the Haitians were back to full strength, this time the Haitians opted for massed columns with skirmishes out in front.

Alas the allied line held, the Haitians had gambled on one of the allied players pulling back from the line to head for the waiting naval transport, but in a rare show of honour both players opted to trust each other destroy the flame of liberty so they could continue to line their pockets with the ill gotten gains of the slave trade.... (Yep I was feeling a little picked on, I was sure one them would buckle and run for the boats) :-) 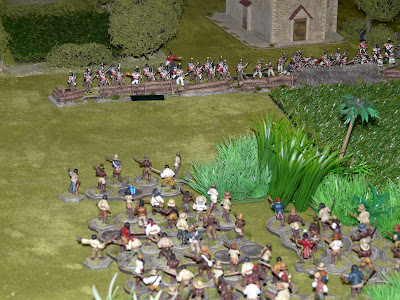 The Haitians were firmly beaten but to be fair it was to be expected, facing a well trained formed enemy behind defensive works what did I think the outcome would be?
The lack of a couple of extra officers/bigmen in the Haitian units would have kept them moving but the levels of shock and poor quality bigmen kept them surpressed.

A great game regardless and one day the island of Haiti will be free and they will win a game.
You can guess what's on the paint table next.
Posted by Stuart S at 17:49 8 comments: