Less than two weeks before the Wyvern's Annual all dayer and this year we are taking Sharp Practice up a level.

One of the best things about gaming in a club enviroment rather than the mid-week kitchen table experience is the ability to bring several players together on a far larger gaming area. Over recent weeks many us have played Sharp Practice with a single force. But could this be scaled up to a larger battle keeping everyone engaged and retaining the original feel of Sharp Practice?

Carl at the club has a massive AWI collection which needs a good outing every now and again and with several players willing to take part. The challange was to find an encounter that played to the strengths of Sharp Practice and gives everyone a full days gaming experience rather than having people playing a bit part or having nothing to do for long periods.

After much consideration and flicking through the bookshelf The Battle of Cowpens 1781 seemed to fit the bill perfectly.

This encounter has several elements which make it perfect for Sharp Practice.
Account. The war in the southern colonies had become something of a stalemate, neither side having sufficient strength to hazard full out offensive operations.
Tarleton had made his reputation in the southern colonies as a ruthless and impetuous commander. Pursued by Tarleton, Morgan determined to make a stand by the Broad River. He selected a simple position on two low hills in open woodland in the expectation that Tarleton would make a headlong attack without pausing to devise a more subtle plan. Morgan was correct in his assessment of Tarleton’s actions.

Morgan placed the Georgia and North Carolina militia in front of his line with a further screen of riflemen to their front. His main line was on the first and higher hill and Washington’s dragoons were placed behind the hill. He had no guns.
If my workings are correct the American commander should be able to field 3 Separate Infantry forces and 1 Cavalry force.

Tarleton marched his force onto the and attacked immediately.
I have browken the Loyalist command down into three core sections, one made up of regulars, one of Loyalists and a cavalry command.
Tarleton's first move was to send the 17th Light Dragoons to disperse the riflemen. The dragoons were driven back by accurate fire.
Tarleton formed his infantry line and began the advance; the Light Infantry on the right, the infantry of his legion in the centre and the 7th Royal Fusiliers on the left.

Troops of light dragoons flanked the foot. The reserve comprised the 71st Highlanders and the cavalry of Tarleton’s legion. 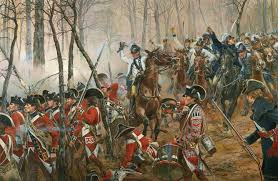 Morgan’s riflemen opened fire on the British line and made a point of shooting down the “epaulettes” (the officers), before falling back behind the main American line.

A troop of light dragoons pursued the riflemen and were attacked and driven back by Washington’s dragoons.

The Americans went onto the offensive and the British line was overwhelmed. The 71st continued to fight until finally forced to surrender. Only the Royal Artillery gunners fought until they were all killed or wounded.

Tarleton fled the field with the remnants of his column, the cavalry of his legion having refused to charge from the reserve.

Casualties:
The British lost 39 officers and 60 soldiers killed. 829 were captured. 12 Americans were killed and 60 wounded. The Americans captured the British baggage and the colours of the 7th Foot.

Converting the battle to Sharp Practice - Scenario Defence in Depth.
The British must capture the American Primary Deployment Point.
Each side holds 7 command cards and may not deploy more than 12 Big men.

So the plans are in place.

The core forces have been posted to the lead commanders allowing them to consider what support points are needed for each commander or whether a new brigade should be formed?

The blog and hobby generally has really fallen behind in recent weeks, what with a couple of holidays and trying to play catch up at work to make up for the "rest".

Devon was rather wet.
What did I expect for August in the UK?

However looking for things to pass the time I wandered into a couple book shops who had a number of small booklets on the Smugglers and Wreckers of North Devon. Perfect as I had been looking at the Black Scorpion range for several weeks thinking about how I could find a use for them.

During the 17th and 18th centuries smuggling or Free Trading was commonplace in the West Country and considered to be a very profitable way of life!

Wrecking was another popular activity, as goods were washed ashore from a wrecked ship were regarded as common property. The wreckers of Mortehoe were notorious and feared by sailors it was said a sailor would rather drown than come ashore at near the men of Morte.
Any ship in trouble brought locals to the shore and in no time the ship would be destroyed and its cargo carried away. It was illegal to claim salvage from a wrecked ship if anyone was found alive on it. Therefore the wreckers would dispose of any survivors!
One of Mortehoe's most notorious wreckers was Elizabeth Berry, who it is thought used her pitchfork to drown sailors." (she was arrested for plundering the William and Jane in 1850 and given 21 days hard labour).

It seems that everyone was involved; in 1783 all the Ilfracombe pilot boats were suspected of smuggling and one, the Cornwall, was seized and cut up into three parts. An Ilfracombe Collector from 1804-1824, Thomas Rudd, was father in law to a known smuggler, Cooke, who was never caught. In 1825 the richest man in Combe Martin, John Dovell, was prosecuted for handling smuggled goods.


The most infamous smuggler in north Devon was Thomas Benson, who in 1747 became MP for Barnstaple. The following year he was granted a lease on Lundy Island and entered into contract with the Government to carry convicts abroad.
However, he landed them on Lundy instead to run his smuggling operation. He became over confident and was fined for smuggling and stripped of his office. He didn’t pay and his lands in Bideford were seized. To recover his losses he persuaded the Captain of the Nightingale to fire it for the insurance, but the plan was discovered and he fled to Portugal.

Now they sound like some cracking scenario's to me....
Just the tonic to kick start the hobby again....

One of the great reasons about gaming at a club is you get to go BIG on games and expand beyond the kitchen table and todays offering was no different.

It's been 12 months since the Elizabetan Zombie Wars have had an outing - which is a shame as they are really fun games to run, played out using the Songs of Blades rule set. 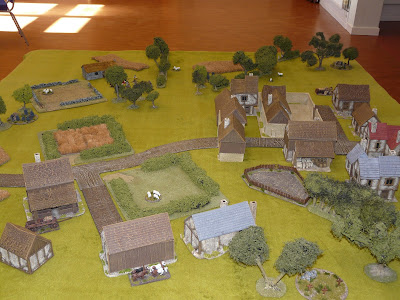 Scenario
The people of Shifton had been walled in for several weeks, the cadavers continue to roam the countryside reacting to any movement of the living yet strangely enough ignoring livestock and wildlife it was almost as they they were only drawn to cravings of the flesh of their own kind.
Within Shifton people were begining to starve and lose hope driven partially crazy by the fact that outside the walls their flock and livestock continue to graze as if nothing had changed in recent months.

Desperate to change their fortunes and bolster their much needed supplies small scouting parties had been sent out but they had been forced to ground in barns and cottages in the outlying area as the undead had shambled towards the movement from within Shifton, orders were simple sally out of Shifton sheppard the outlying flocks in and rescue the scouting parties.

The Miltia commander decides to split his forces rushing to grab the outlying herds before cadavers rise from the plague pits. Firing was proving  ineffectual on the rotting corpses and only serve to attract more of these unfortunate souls which were emerging from the plague pits. 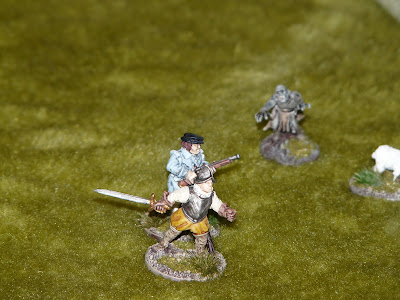 Torn between holding on to the new rounded up flock and their personnel safety mankind is forced into hand to hand combat with the rotting cadavers. 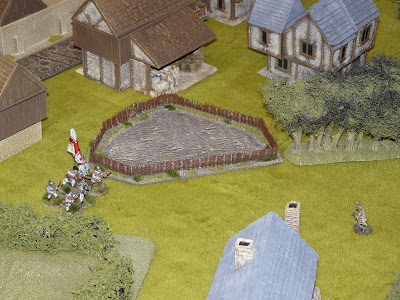 In the centre of the table a firing line is formed to bring down the undead. single zombies are easily dispatched but shot and powder runs out the dead do not. 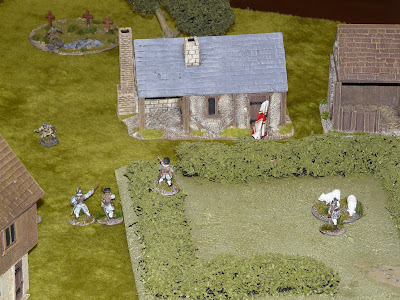 Ensign Smyth embarks on a solo mission having spotted a wagon of supplies which if captured could provide the village with a much needed boost leaving his comrades he takes his standard and skirts the field looking for his treasure. 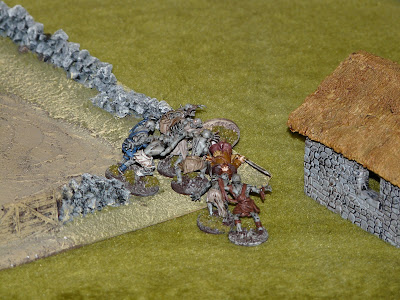 In a small stone cottage to the North of the village two scouts burst out of their hiding place hoping to grab some of the flock before they are spotted by the undead but good fortune is not with them, one valiant fighter sees an easy victory in striking down a rotting body only to be knocked to the ground where he is set upon by the undead horde. 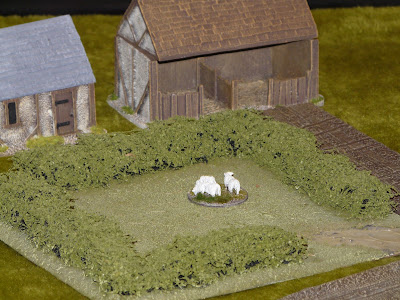 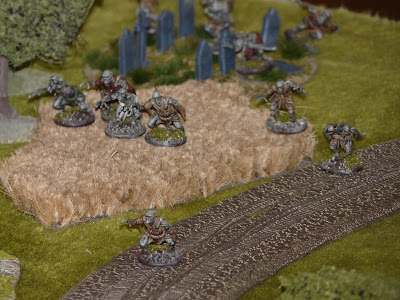 The most numerous supplies appears to be around the Blacksmiths and Barn, with sheep and sacks of grain and dried goods aplenty however unfortunately for the living this is where the Cadavers appear most numerous. 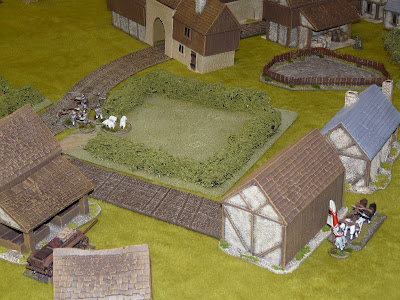 Slowly Ensign Smyth makes his journey towards the wagon within his newly acquired draft animals but his slow movement is drawing more foul followers from the woods to his rear. 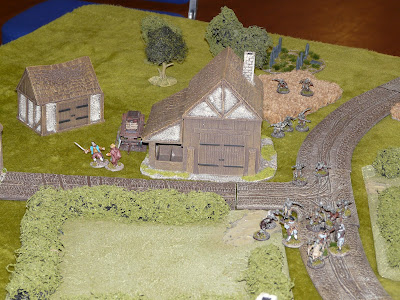 Hiding in the barn the final scouting party make their presence known as the village militia battles the foul beasts who slow increase in number. 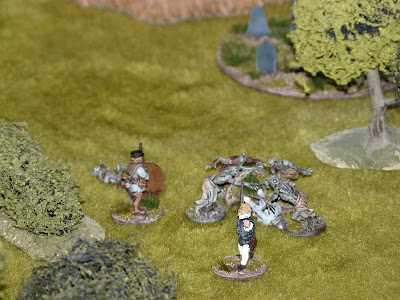 Sensing something was better than nothing and cutting their losses the eastern party of humans make a run for it whilst the Cadavers feed on a poor soul. 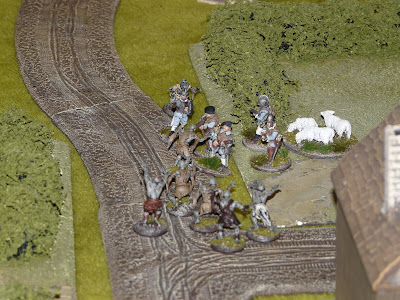 Falling back from the advancing corpses the men of Shifton struggle to hold the undead at bay. Three sheep would not be enough to sustain the village for long, but it was not lost on some members of the community that the loss of so many fighting men whilst reducing their defences would also reduce the number of mouths to feed.

Dark times are indeed ahead for the people of Shifton.
Posted by Stuart S at 09:20 10 comments: