These seem to have been on the paint table for such a long time but finally they make an appearance, just in time for the latest campaign outing. I knew there was a reason why I was running it. 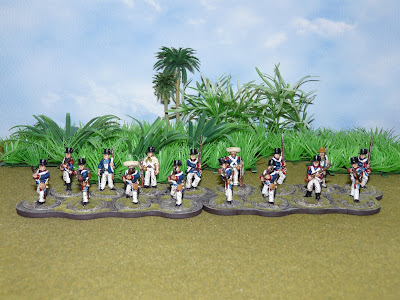 They represent troops of the Guyane Regiment garrisoned in Saint Domingue from 1790 - 1792
To separate the Royalists from the Revolutionary French, I gave them the round hats I could always paint in a tricolour cockade if they switch sides later in the war. 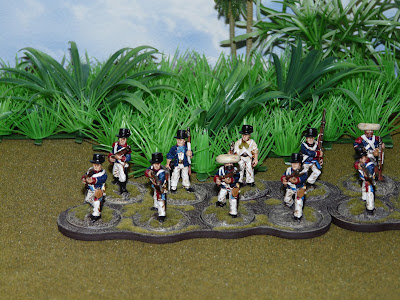 I wanted these to have a far more "lived" in feel to them, perhaps out in the mountains for several days or those who have been garrisoned on the island just a little to long. 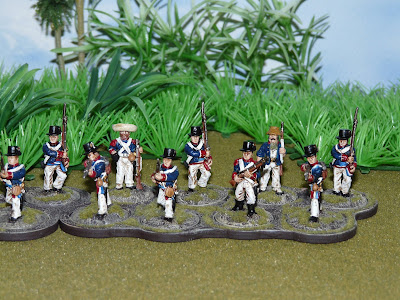 The figures were from Trent Miniatures again originally from the Polish packs but with colonial cavalry heads added in. 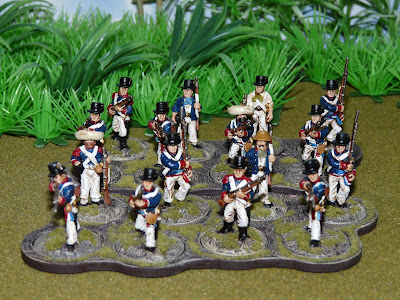 This is the supporting plate. Its the gentleman in the background on the far left who seems to be far less formal. 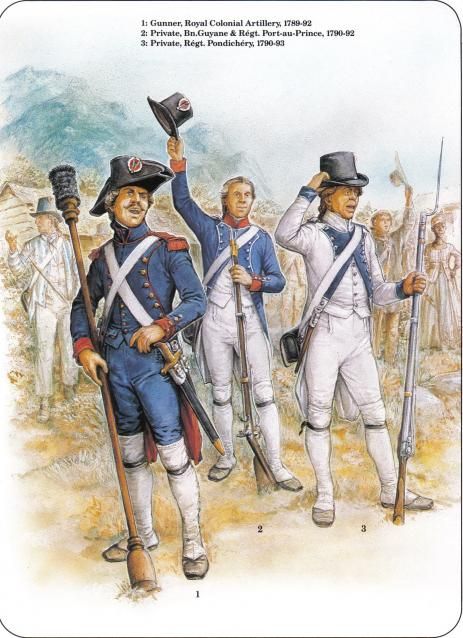 Next up more early French, I have a hankering to paint up Pondichery Regiment on the right....
Posted by Stuart S at 09:10 10 comments:

Email ThisBlogThis!Share to TwitterShare to FacebookShare to Pinterest
Labels: Haitian Revolution, Sharp Practice, The Pearl of the Antillies, Too Fat Lardies, Trent Miniatures

The sun sets on day 6 as factions go into a day of recruiting but not before in the North of Haiti the Slave army of Dutty Boukman attacks the French forces holding the Fort at Bahon.... 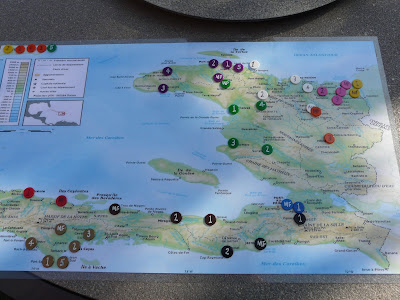 In later years there was an extensive building programme to defend against future French invasions, but bad news for the Viscount de Blanchelande the fort on our battle won't be this impressive.

The French Royalist forces whilst out numbered perhaps as much as 2:1 do have the advantage of defending and have the newly acquired cannon to add to their forces.
But the Slave forces are lead by the infamous Dutty Boukman.

Boukman born in Jamaica he was sold to a plantation in Saint-Domingue after he was caught teaching enslaved Africans to read. The moniker “Bookman/Boukman” was an indication of how slave owners viewed enslaved Blacks at the time who knew how to read.

One of the early leaders of the revolution he said to have declared at one of the meetings at Bois-Caimon, "God who has created the shining sun above … is watching us and sees the misdeeds of the whites! The God of the whites demands crime … Our God who is so good orders us to take vengeance!"

Rumoured to be over 6 foot tall he was quite the leader until captured by the French and beheaded, The French hoped to quell the revolution by parading Boukman’s head on a stake. Let's hope he fairs a little better in our campaign.
Meanwhile as the opposing forces ready themselves for battle by bringin in local reinforcement to add to the fight. The Spanish reinforce their hold on Ferrier having watched Princess Amethyste forces retreat over the river at Mahon. The Slave forces are in a sorry state with numerous wounded slowing their movement add to that the poor camp conditions they lose another sack of supplies to a plague of rats.... Things are not going well for the Company of Africans. 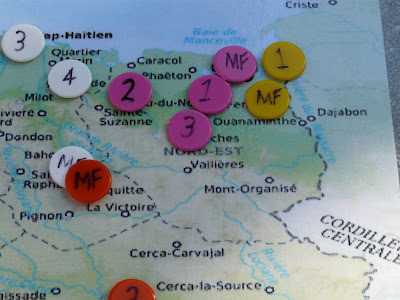 Meanwhile seeing his competition now heavily engaged the Haitian Loyalist General Toussaint Louverture makes his move advancing on the border where George Biassou and his rebel forces have been waiting for the likely attack.... Both sides wait for reinforcements to bolster their number before what is to be a mighty clash. 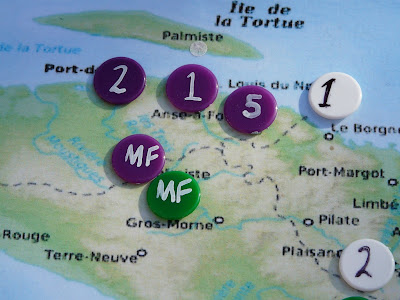 To the south things remain unchanged all factions continue to prepare for war, building defences and foraging for supplies content to see how things pay out in the north of Haiti.

The British working to their own agenda are distracted by a rescue mission to save a Damsel in Distress. A Lady’s maid joins their force and begs Maitland for assistance. The Lady has been captured by revolting slaves and is being held close by. Maitland dispatches forces and rescues the lady without losing any men. Lady Charlotte joins his forces for the remainder of the campaign.
Stay tuned for the Battle of Mahon and the first encounter between the French Plantation owners and the Insurgents & Maroons.
Posted by Stuart S at 11:31 8 comments:

With the first game under our belt in the campaign, I thought I would splash out on some buildings for the battles to come.
I do dislike painting buildings so these ready painted pieces from the guys at Tablescape are perfect. 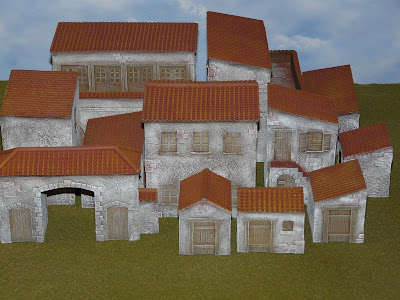 They needed a little bit of work as they can appear a little on the bland side on mass, so spent the morning painting the doors and windows. These brings them to life and gives a little more variety to the town. 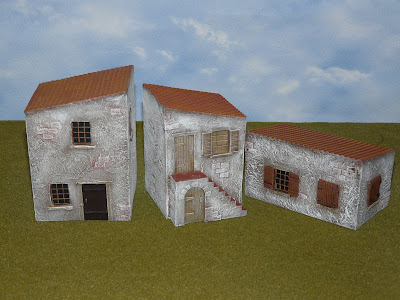 Longer term I plan on basing a number of them to give me some walled gardens, but these are ready for the tabletop. 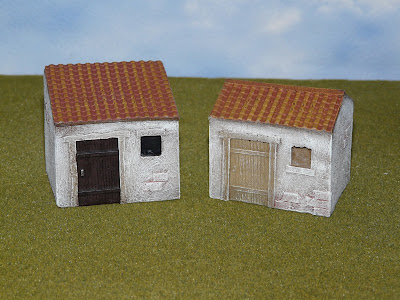 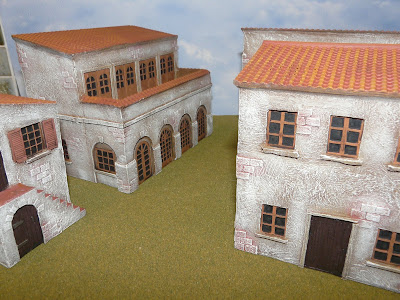 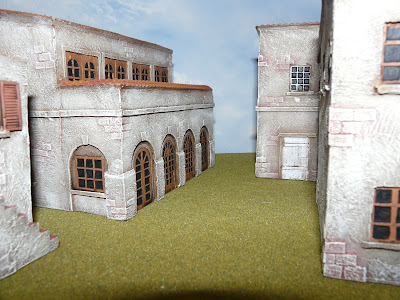 The Pearl of the Antillies. - The Haiti Campaign - The Battle for Ferrier 5th August 1791

After almost a week of movement the first encounter has taken place, with the Spanish under the command of Brigadier Joaquín Moreno crossing the border to attack the small town of Ferrier which is under insurgent control led by Princess Amethyst and her Company of Amazons - (Yep she is real....) 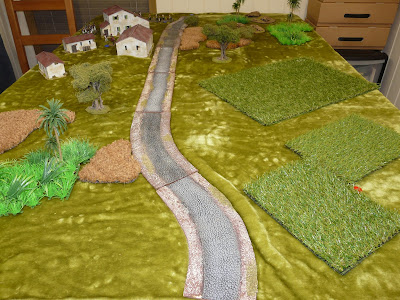 The Spanish are the attacker we rolled for the battlefield using Too Fat Lardies - Dawns and Depatures campaign suppliment and generated the scenario to give us a flanking attack. 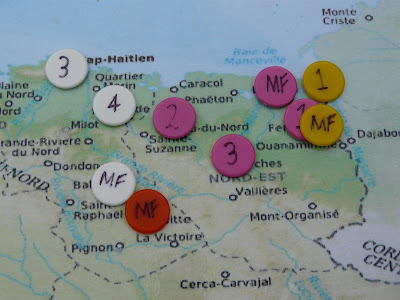 The Spanish (French.) came on on mass with a number of regular line Infantry with a supporting medium Artillery piece, they also fielded the dreaded war dogs and colonial cavalry more than enough to clear the rebellious slaves from the field. 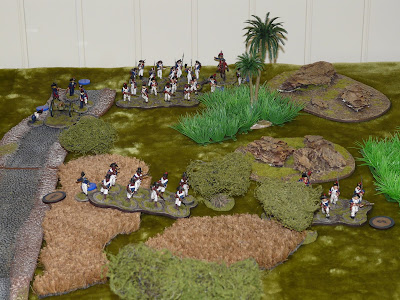 The insurgent forces had the numbers with several musket armed troops, the weapons liberated from the local arsenal their number was bolstered by a large number of escaped slaves armed with only knives and sharpened stakes but they were very keen to take the fight to their former masters. 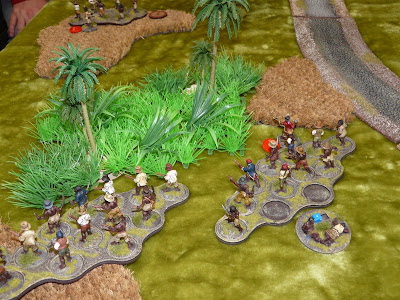 The Artillery deployed and found targets a plenty inflicting a number of early losses on the the mass ranks of escaped slaves. 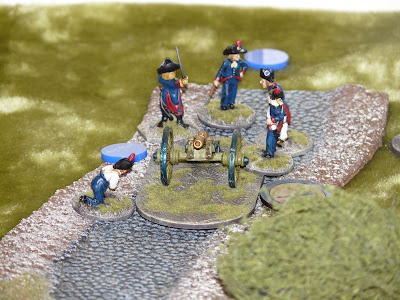 As the Spanish line advances through the plantation fields the mass of Insurgents are revealed over 50 armed men looking to stop the colonial advance. 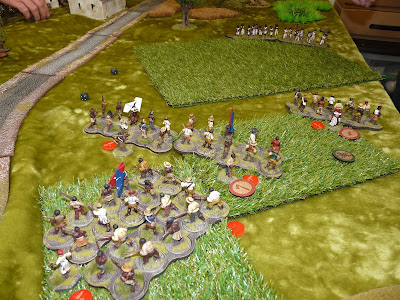 Meanwhile on the left flank the freed slaves push towards the farm when they are greated by the colonial cavalry and a unit of snarling dogs who were straining on their leashes these hounds were nasty and used to chasing down escaped slaves. 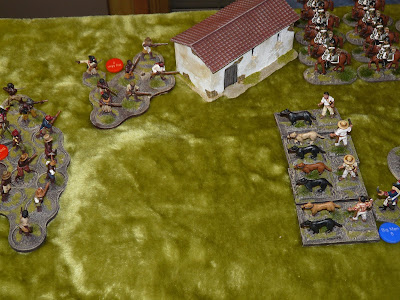 The dogs are unleashed they race forwards catching the skirmishers as they try to run, ripping many of them to pieces, the leader Victor and one of his men barely make it off the table. The insurgents force morale slips. 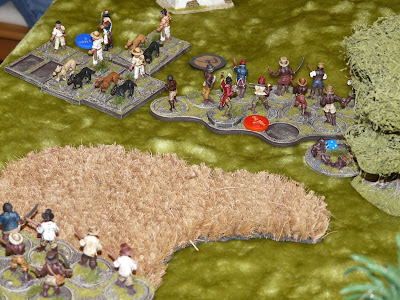 Enraged the slave mass charges into the flank of the slave handlers in a fight to the death, finally the dogs and their masters are forced to flee, down to a single hound, but they had achieved their aim, the Princesses force morale had fallen to 5 after units had been broken and leaders wounded. 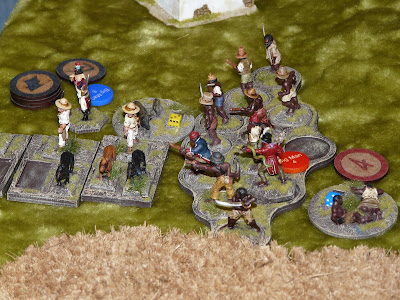 Meanwhile on the right flank unable to bring her firing line to bear, Princess Amethyst brought her forces forward firing a ragged volley. The Spanish advanced bringing more regulars into the action and a long range fire fight opened up, but the poor shots of the former slaves failed to find their targets. 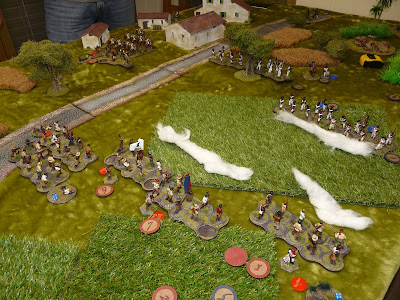 Meanwhile having barely drawn breath after defeating the dogs the former slaves were fighting for their survival as the cavalry crashed into them. 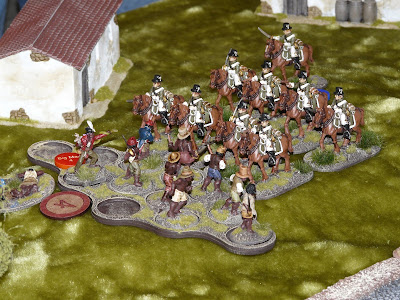 To cheers from the slave ranks the cavalry were beaten and forced to flee, with Captain Matias being carried from the field, Spanish morale began to fall, could the Princess pull this off? 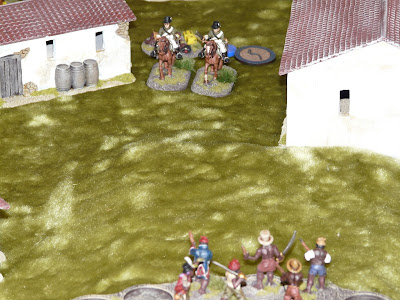 Sensing this was their chance and their morale on the brink of collapse the musket armed slaves threw down their firearms pulled out their knives and machetes and charged forwards The Spanish line were unloaded could this be the opportunity the slaves had been waiting for.
After two heated rounds of combat the colonials quality won through and the slaves were forced to fall back, their force morale slipped below zero and the insurgent forces fled leaving the town of Ferrier to the Spanish. 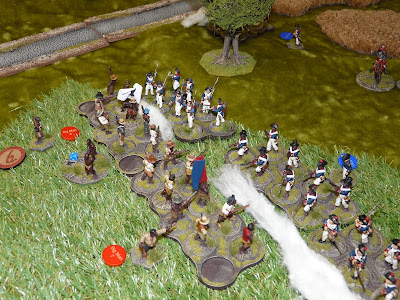 A great opening battle in the war for Haiti, plenty of learns on both sides.
Quality should win over quantity, war dogs are bloody nasty and cold steel wins over long range musket fire.

As the smoke of battle cleared both sides looked to their casualties, the Spanish with good medical support were able to patch up many of their troops losing only the following.

They also had 4 wounded that will return to duty on Sunday.


The Slave forces were not so lucky with little or no medical support many of the days casualties would take longer to be ready for combat.

Princess Amethyst and her Company of Amazons retreat from the town and need to consider their options in the face of the Spanish victory.
Posted by Stuart S at 11:13 5 comments: