Songs of Drums and Tomahawks - Smoke gets in your eyes....

As space starts to become a premium it's always good to find that figures can be used in a number of different periods, so when I was offered up the chance to try Songs of Drums and Tomahawks the Smugglers were an easy choice for an evenings gaming.

Another set in the Songs of Blades stable of rules these designed for the French & Indian Wars.
As usual they are quick to pick up with players controlling 12-15 figures a side with a failed command roll meaning that the initiative passes to your enemy. The individual character traits gives plenty of variety to each side. But watch out for the scalping rules as your characters run off to give your fallen enemy a hair cut.....


A fun evenings gaming and proof you don't need masses of terrain and troops to keep you entertained. The battle embedded one way and the other, all firearms needed 2 actions to load so once you had fired very often you had no choice but to close with the tomahawk or knife.

Looking forward to the next outing.

Email ThisBlogThis!Share to TwitterShare to FacebookShare to Pinterest
Labels: Black Powder, Songs of Blades and Heroes, Songs of Drums and Tomahawks

Pistols at Dawn - A Cutlass! Scenario

After a few weeks of slowly plugging away at the Smugglers and Marines time to give them some table time and a refresh of the rules before considering how a rolling campaign campaign might look.

A very small scenario with a party of smugglers who have rowed up river and are looking to retrive their landed goods from a barn at the far side of town. The Government forces need to stop them. 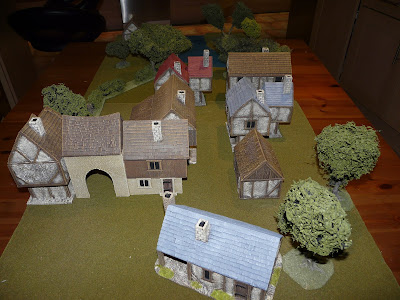 I priced up each of the figures and armed them with what they were cast with, that provided me with $493 worth of privateers and $466 worth of Marines pretty even or so I thought. 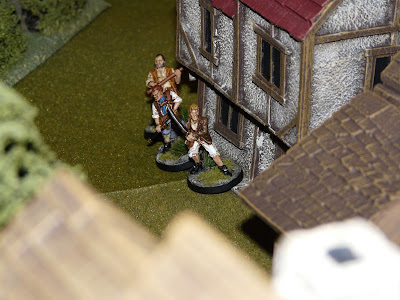 The Smugglers split in to two groups looking to make there way through the town. Armed with Cutlass and Axes I should have guessed that they might be quite tasty in Hand to Hand. 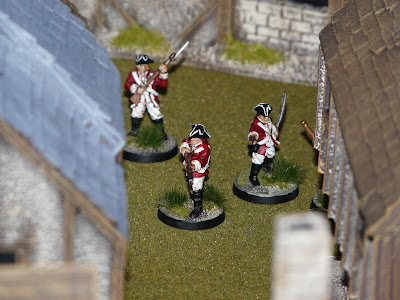 The Marines step out into the street looking to block their path - A cornish stand off. 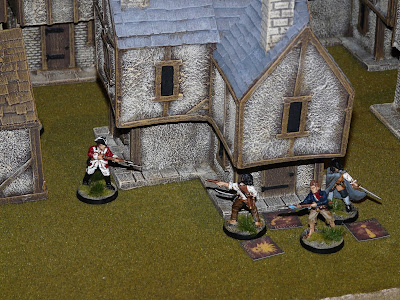 After the occasional pistol and musket shot one of the Marines looks to take advantage of a spooked smuggler and moves on the first group of tax dodgers. A poor idea on my part as a poor authority roll on the next turn allows the smugglers to surround the brave yet foolish trooper. 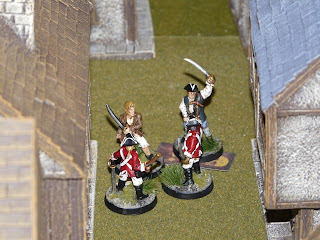 Meanwhile in the main street the Captain of the guard is confronted by to members of the gang has they attempt to rush forward to support the lone trooper. 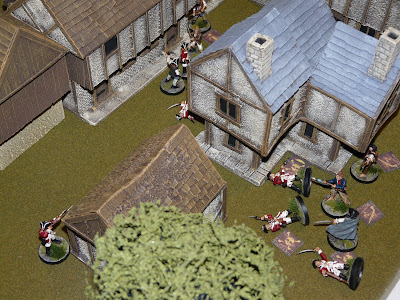 With the bulk of the patrol now drawn into an uneven brawl a number of the Marines are cut down, their muskets no defence against slashing Cutlasses and one Mariner who armed with nothing but a long spear dispatches two of the government men - Those exploding dice can be deadly.

The customs men are forced to withdraw.

The morale of this encounter - don't be cocky just because you have a flash uniform and play to your strengths, Marines are far better at standing back and shooting at their enemy rather than wading in with the bayonet it will only end badly.

After a few turns the rules turned at to be far more tactical in their nature than the original read through suggested, do you hold back on activations or use them all at once?
Attacking players from the side gives you an advantage but you in turn need to protect your flanks.
Once you are in combat your activations are soon used up reducing the ability to bring reinforcements in.

Plenty to think about in the next outing - Now to read the campaign element.
Posted by Stuart S at 12:44 4 comments:

Another batch of Pirates and Smugglers complete from the chaps at Black Scorpion for use within their Cutlass! rules.
Cast in resin I was a little concerned at first, but they take paint well and contained very little flash, it will be interesting to see how they stand up to wear and tear on the table top as they are a touch on the light side. 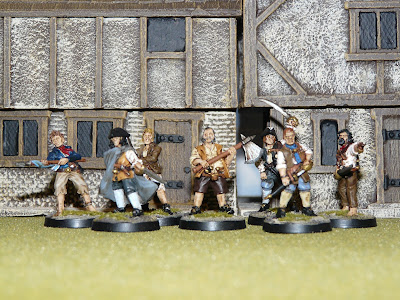 I figured these fine fellows would be ideal for smuggling games in the coming months.

With the annual Devon holiday booked this year, there is an added interest this time around rather than the usual holiday hangout of Tea Shops and Seaside amusements. A chance to slip away to walk the Smuggler beaches from the 1700's that should make the kids happy. :-)

Reading up on the period there is a vivid picture of the Smuggling activity in area in the letters of  Philip Taylor, who was Collector of Customs at Weymouth from 1716.

During the winter of 1717-18 he wrote: "the running of great quantities of goods having of late very much increased" - the government tried to push through a bill for the prevention of smuggling. It fell down in the House of Lords and, as a result, reported Philip Taylor the following April, "the smuggling trade is prodigiously increased and they and all persons concerned with them are become more insolent than ever and dares any power to oppose them, which will very soon have a very bad influence on trade. Besides, as these smugglers are generally the dissatisfied part of the country, their riding in troops of thirty or forty armed men on the least appearance of an opportunity will be dangerous to the peace of the country as well as troublesome to the Government." The smugglers even had the audacity to claim - and they used the failure of the smuggling bill as their evidence, that they were now "tolerated in smuggling by the King, Lords and Commons."

The bill, - which, among other things, forbade the importation of cargoes in vessels of under fifty tons - finally became law twelve months later, but by then Taylor was writing in colourful style:
"The smuggling traders in these parts are grown to such a head that they bid defiance to all law and government. They come very often in gangs of sixty to one hundred men to the shore in disguise armed with swords, pistols, blunderbusses, carbines and quarterstaffs; and not only carry off the goods they land in defiance of officers, but beat, knock down and abuse whoever they meet in their way; so that travelling by night near the coast, and the peace of the country, are become very precarious; and if an effectual law be not speedily passed, nothing but a military force can support the officers in the discharge of duties." 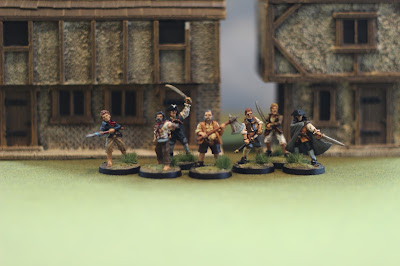 Philip Taylor was not exaggerating when he reported that "the tumultuous and riotous proceedings of the smugglers is not anything abated but daily growing upon us". He went on: "Most of the smuggling trade in this country is now carried on by people in such great numbers, armed and disguised, that the officers, if they meet them, can't possibly oppose them therein, nor do otherwise than search for the goods in suspected places, which by means of the country's favouring the smugglers, very often proves ineffectual and expensive to the officers." But if they did get caught and sentenced, they could be hung!

Brandy and wine made up the bulk of the contraband cargoes landed in Dorset between 1716 and the mid-1730s, but many other commodities appear in the lists from time to time, including rum, coffee, tea, salt, pepper, cocoa beans, vinegar, cloth, silk handkerchiefs, tobacco, playing cards, foreign
paper and logwood sounds like an order to the guy's at Anisty is in order.

At Abbotsbury a young Customs officer, Joseph Hardy, was repeatedly ordered by Philip Taylor to retrieve the goods, but when he did so, he was obstructed by a gang of locals and immediately lost them again. Taylor commented sarcastically: "They [Hardy and Whitteridge] being both the most original fools I ever met with or heard of, in the scuffle of taking the goods away I can't find any blow was struck on either side and (it appears) that the heroical officers were directly frighted out of their goods."
Taylor recognised, though, that just about every person in Abbotsbury was an employee of the smugglers and concluded that the only way to settle the matter was to call in the army, who had been ordered to help the fight against smuggling when requested.

Accordingly he sent a message to Lieutenant Carr, commanding officer of Lord Irwin's Regiment of Horse quartered at Dorchester, and on November 16, Quartermaster William Thomson left the county town with Joseph Hardy and eighteen troops. On arriving at Abbotsbury, they found "a great mob of people gathering themselves about them" and Hardy summoned the parish constable and tithingman and asked them to help keep the peace. At the sight of the troops, Bradford the bailiff changed his attitude rather suddenly, handed over the keys and allowed Hardy to recapture the goods in the face of a vociferous but otherwise peaceful crowd.

Now there must be a scenario or two in that account.

Dawns & Departures in the Desert.

Following on from the latest outing for Claude, I thought it was high time I put him into a formal campaign setting, having purchased the campaign suppliment for Sharp Practice 2 over Christmas, I figured this would give me the push to get some more game and painting time in and allow players to consider more than just the game in progress.

The plan is for the various club players to take on the role of Claude in the club games whilst I run the Ottoman's. Team Claude can decide on their initial force make up and their efforts will be documented here. While the Ottoman mission will be held in camera.

Having diced for the misson - Ensign Claude Cannard gets landed with the task of Intimidation.

There are times when the gloves need to come off, and this is one of them. The peasants in the
region have not shown sufficient loyalty to your cause and are suspected of actively assisting the
enemy. Your mission is to burn every sixth house in any inhabited Area to the ground to show who is
master in these parts.

Dawns and Departures contains three Geographical Tables for Northern and Southern Europe together with North America, I needed to adapt these to give the true feel of the Middle East so I created the following table to enable the terrain to be generated.


When it comes to any encounter the table is divided into six equal zones and the terrain below is rolled for. The defending player places the terrain in any one table Area of his choice, placing this wherever he likes within that square Area. The defender takes his choice, this continues until all key terrain is placed.
Dawn and Departure has a niffy feature in that now the defender may move one single terrain piece. When done, the attacker may do the same, but may not move the last piece that the defender moved.
Watch your opponents face when that Strategic Hill is moved out of reach of your forces.

Again I adapted the terrain layout to suit the Middle East and my own collection.

With the mechanics sorted. On to the terrain for Claudes mission.
Claude starts at the bottom centre square and will need to cover plenty of ground if he is to cover his mission seeking out every building in the local area.