Welcome to the last post of 2018.
It's now traditional in the blogosphere to throw up a review of the past 12 months efforts but more of that in a later post, the last 3 months seemed to have slowed to snails pace on the gaming and painting front, a new job closer to home which actually turned into less free time rather than more, coupled with a few DIY projects which curtailed much of that painting and gaming time, so hopefully 2019 brings a bit more free time to get some hobby time in.

I did manage to sneak in a couple of games over the Christmas break which all seemed to have an undead feel to them.
First up a zombie horde chased off a band of Elizabethan Spanish looking to fill carry out a short run to fill a bucket of water. 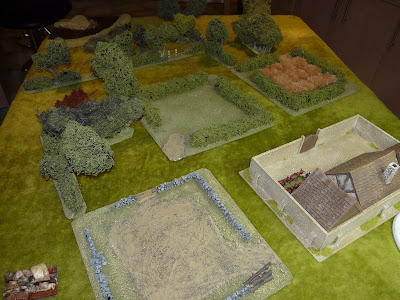 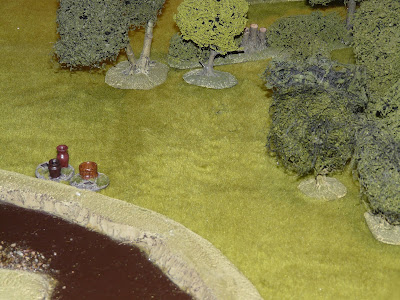 It all started so well bring the oxen out and keep quiet, the last thing you want to do was awaken the dead from their plague pits. 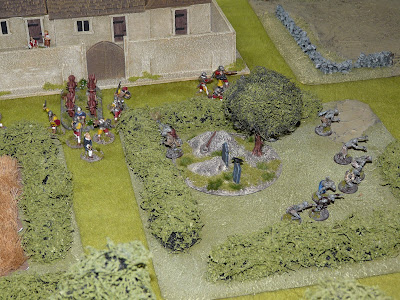 You definately don't want to fire a musket in the middle of the table and awaken everyone within 100 yards of you and your water party. Looks like the trip to the river bank will have to wait. 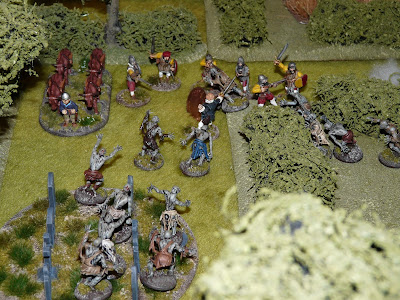 Meanwhile on Boxing day whilst most people were sleeping off yet another large lunch and far too many chocolates. a few valiant souls were intoduced to Zombicide. 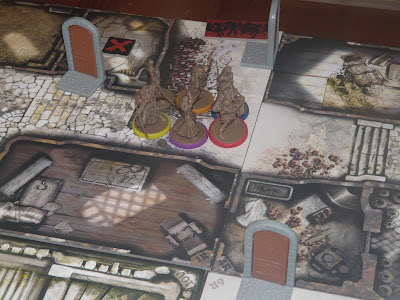 This should have been an easy scenario but the turn of the cards and some bad decision making turned into a nightmare. Running down a blind alley and finding their way blocked by a nasty wolf thing... they watched as the undead kept on building into a swarm. 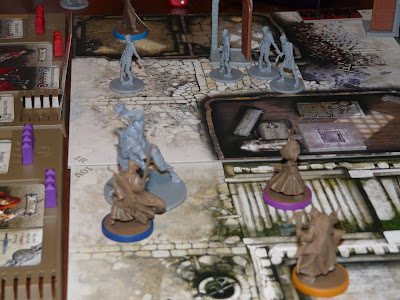 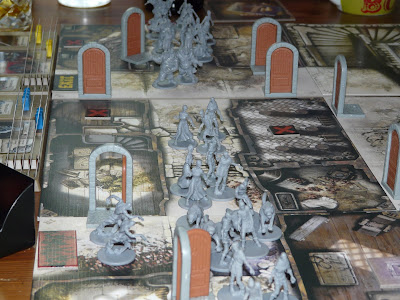 Our heroes were taken down by sheers numbers, not sure how many Zombicide virgins will be back for more, but my new doors looked nice :-) 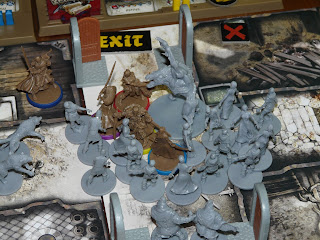 The wife and kids did me proud on the present front amongst the usual offering of socks and ale. (what do people think I do at weekends?) was a copy of Warlords latest offering Cruel Seas, it looks like a fun system and perfect for a quick evenings gaming without the need for masses of terrain which will need packing away. The boats look great, I am seriously tempted by an armed trawler... 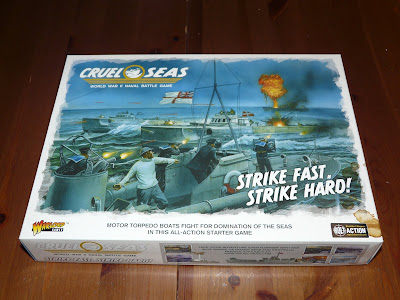 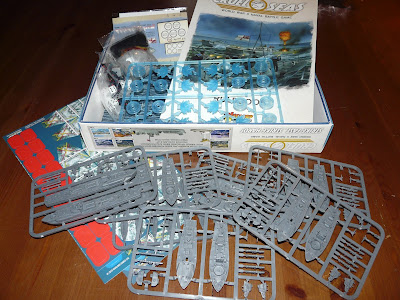 It takes me back to my childhood of reading commando comics at the local newsagent but when did they become £2.00!!! They were 10p in my day. 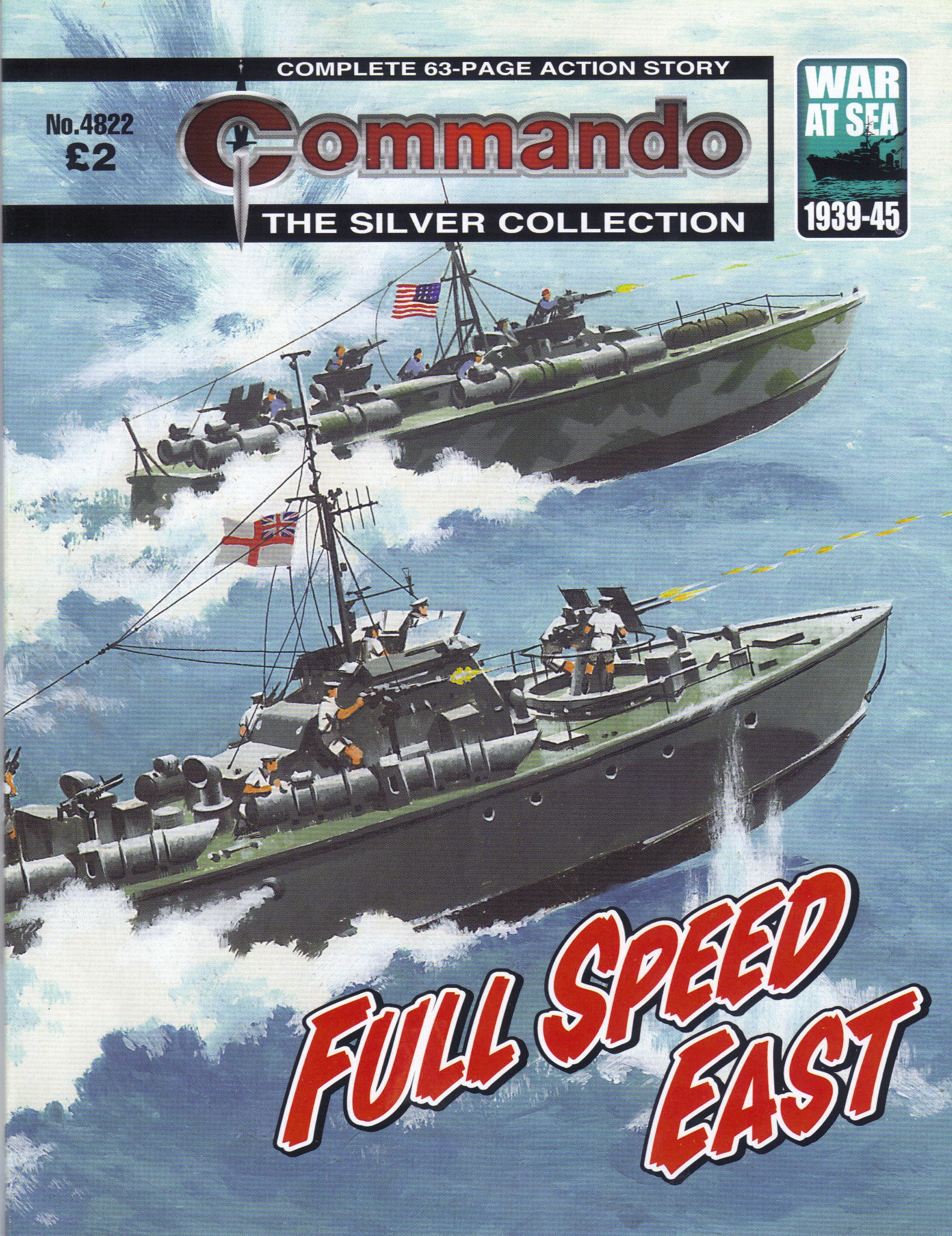 So what for 2019?
I would like to think I can get a little more game time in, I have plans for a Haitian campaign at the club which should spur on the painting activity, I stll have several gaps to fill and have committed to putting on a game at Hammerhead so no time to waste.
The Pirate adventuring has been fun and with Northstar releasing tribal warriors that could make for a few evenings entertainment, the Irish need a few more extra's for Dux and then their are a couple of projects which I am being tempted by once I have cleared some of the back log.

The Pearl of the Antilles - Haitian Revolution AAR #6 Crossing the border.

The last game of 2018 so why not finish with a multi-sided affair which sees the Haitian loyalists crossing the border into Santo Domingo to attack the plantations.

The Spanish had cobbled together a scratch force to defend the main house, knowing that an attack was coming. 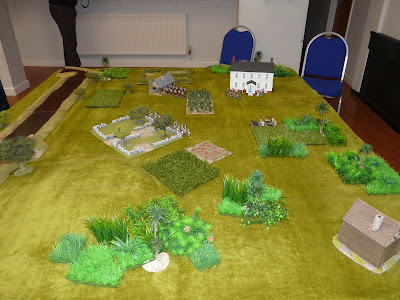 Many of the local women folk had gathered on the front porch including Lady Jane Beufort an English lady and wife of the Spanish land owner Migel Vega a nasty piece of work of owner of many slaves. 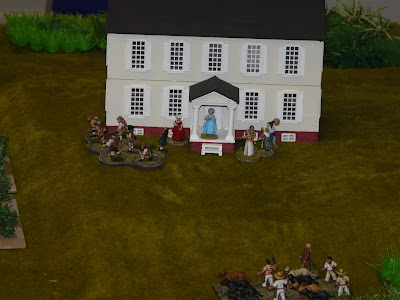 The Spanish had a Squadron of cavalry who were itching to put down the revolt once and for all, they mustered at the forge looking for a chance to take the fight to the insurgents. 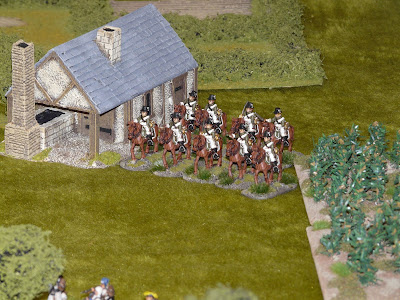 Rushing out of the barn the first of the escaped slaves pushed forwards towards the defenders.
Their shaman urged them forwards. They had one mission kill Migel Vega nothing else mattered. 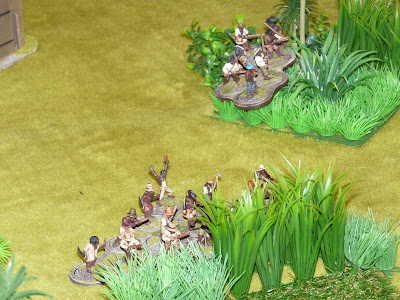 Fearing that Lady Jane would be harmed by revolt the English had sent a detachment from a ship of the line to cross into Spanish territory to rescue her, they had ordered to stop anyone who got in there way. With neither the Spanish or English making any agressive moves towards each other they united in defending against a common foe. 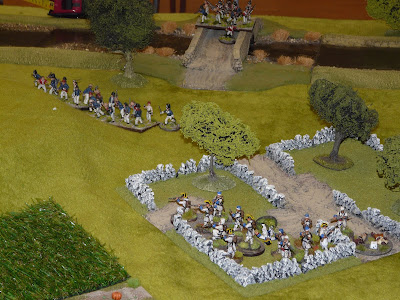 As the colonial powers plotted to defeat the uprising and whisk Lady Jane away, the slaves pressed on with their attack moving towards the main house and seeking out Vega. 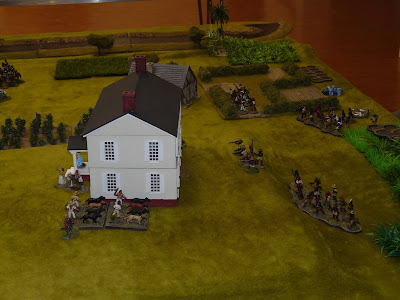 Vega had been commanding his hounds supported by the plantation militia who had been occupying the upstairs of the main house and had been keeping the attackers at bay when by twist of fate having triggered a firing event, let loose a volley and rushed out to meet the Haitian loyalists. 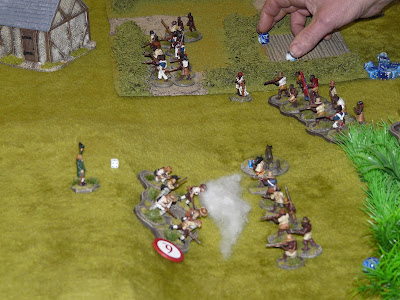 Thinking the cowardly slaves were running scared the Spanish were surprised when the Slaves fell back and ignored them, they had a greater prize in their sights Vega had been stripped of many his dog handlers as the remaining hound fell back, Vega ran to join the victorious skirmish unit but was caught in the open and swamped by the insurgents.... Game over. 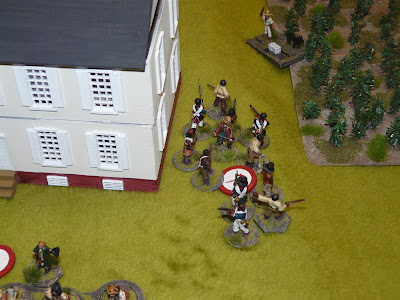 A cracking way to finish the year and a good introduction to a couple of new club members.
Finally a long break over Christmas a chance to get back on the brushes which have been lacking in recent months and a push to get some of the core forces complete before the launch of the campaign proper in Jan 2019.

Blimey has it really been over 6 months since the last outing of Ghost Archipelago?
No wonder it took longer than usual to get to grips with the rules, good news by the end of turn 2 we were well under way.

A couple of quick texts around the group and we were able to amass enough boats and bridges for the Swampland Scenario, three islands with treasure aplenty, but don't roll low on your initiative as this will cause a swamp zombie to appear. Unsurprisingly it was a night of low rolls :-(

The adventures had been busy over the past 6 months and everyone had a couple of sail boats to bring to the party, Marines, Privateers and Atlantians all prepared their landing parties. 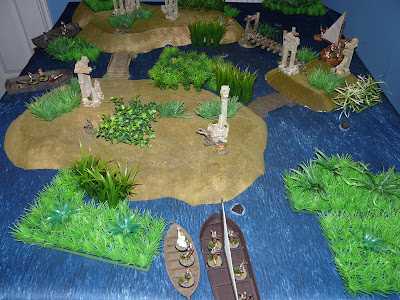 The Crew of the Sun Chaser got off to their usual start, set upon by Zombies. OK we the other players kept placing our undead foe in their path. The Marines marched about confidently shooting anything that moved and the bullet heads hung about doing very little. 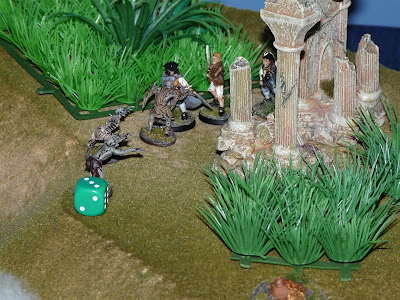 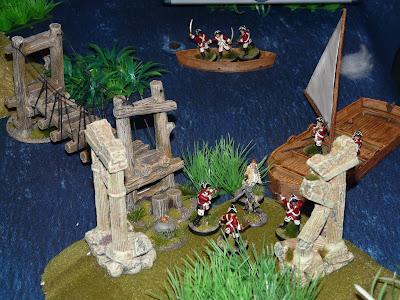 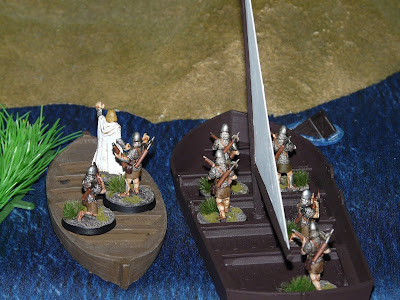 Bonus points could be gained by stepping on each island, but being a sporting bunch we of course were happy to let that happen - Not. So Zombies were soon appearing on the bridges to block the path of the adventurers. 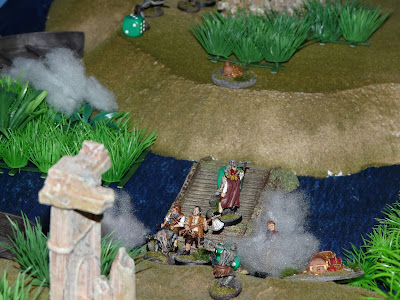 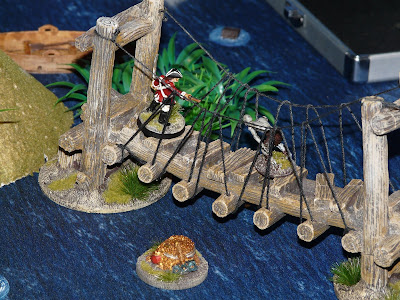 Whilst the Privateers made a lightening grab for the central treasure, the Marines rushed the central island however tonight for once the Atlantians had decided to bring some powder for the muskets and could actually hit a target, the Marines came under concentrated fire and several of their section were killed caught in the open, left isolated even Captain Masters was shot and put out of the game. 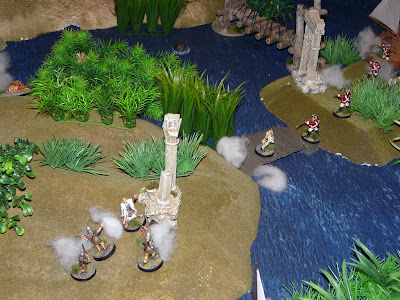 Even without a leader the Marines continued their bold moves snatching treasure and loading up their sail boats, however if you can block a bridge why not fill have a zombie climb aboard your vessel. Yes we the other players might be going last, but we get to mess you up with Swamp Zombies. 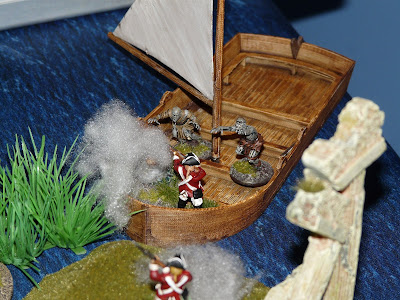 As the game drew to a close the Privateers had snatched the bulk of the loot, the Marines limped off with a bunch of treasure and the Atlantians were left holding the table with nothing but one pile of gold and a bunch of undead. 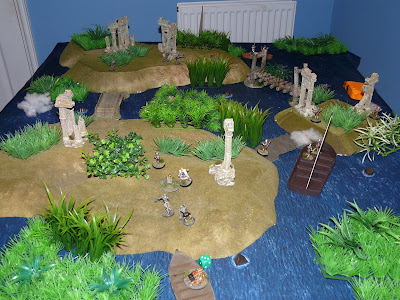 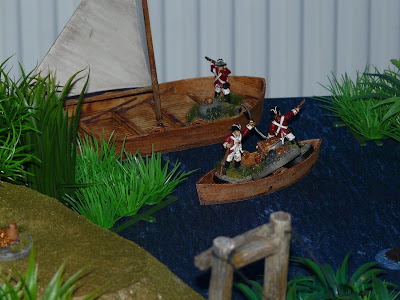 A cracking evenings entertainment which makes me wonder why it took so long to make it on the table. The wandering monster rule and low initiative placement keeps the game flowing and serves as a great tactic to keep players tied up. As you push for that extra treasure.

Despite their high casualties on the night the Marines managed to recover most of their troops and everyone is spoiling for a fight to get their revenge. Roll on round 5.
Posted by Stuart S at 09:36 3 comments: