With the Wyvern Wargamers Open Day a couple of months away, this year devoted to Osprey Games, I have been thinking about what games would be of interest to people looking to walk in during the day, we have run several games in recent months using Men Who Would Be Kings on most occasions the Thin Red Line fending off waves of Zulu's - It had been suggested that Starship Troopers had the same colonial feel so why not adapt the Bug games to TMWWBK.... They always make for a fun club game.

Well I do like a challange So last week we gave (Space)Men who would be kings a run out.

Checking in with all those involved the game was pretty tense with the Mobile Infantry fearing being over run on several occasions as it turned out they only lost around 10 men to the bugs hundreds... that felt about right....
Happy to post up the unit characteristics for those interested.
Will this be my game on the day or perhaps a Water Margin outing using Dragon Rampant I have not decided as yet. Both always make for a fun encounter, happy to put it to the vote.

If you are free and want to come along drop us a line here.

Email ThisBlogThis!Share to TwitterShare to FacebookShare to Pinterest
Labels: Sci-fi, Starship Troopers, The Men Who Would be Kings, Wyvern Wargamers.

Easter Sunday and a simple low key affair. Four warring factions looking to bag themselves a bunch of prisoners who hold valuable information. But with Four factions and only three Prisoners some one is bound to lose.
The three Prisoners are chained up in the cente compound, the four gangs are tasked with entering the complex unchaining the prisoners and exiting the table. This Cutlass! encounter pits Arab against, Pirate, Marine and Atlantian....... 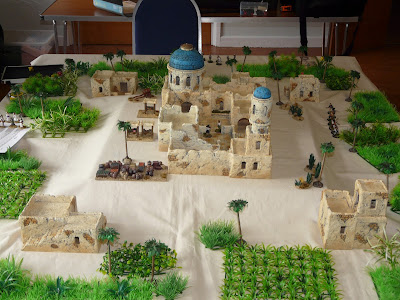 The view from the Marine Forces end of the table. 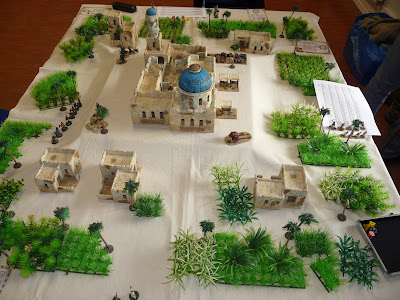 The view from the Atlantian side of the Table, no doors but plenty of windows. 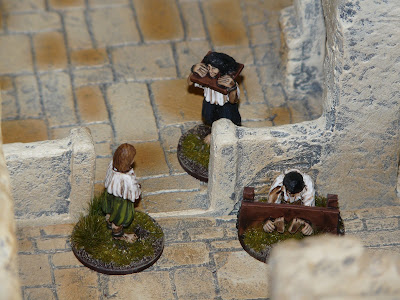 Our poor unfortunate prisoners awaiting rescue. They can not be killed and will need to be escorted from the table. 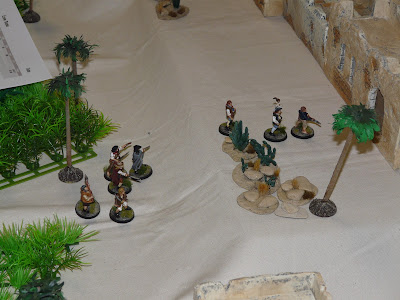 The Pirates are the first to the complex rushing forward, after an initial swift advance a couple of poor command rolls leaves them with limited actions and a large door that simply would not budge. 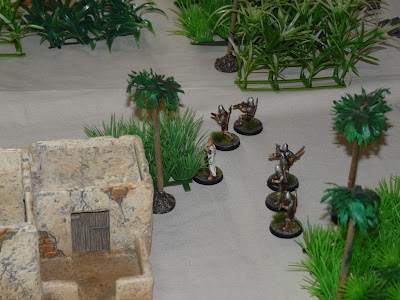 Meanwhile the Atlantians move cautiously forward and content themselves by taking pot shots at the Pirates battering at the door. 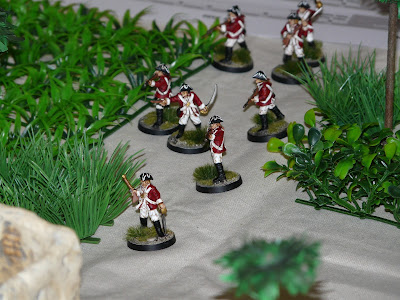 The Royal Marines make steady progress through the undergrowth, quietly advancing whilst the others are distracted by each others moves. 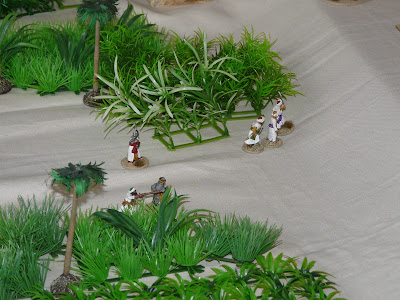 The Arabs advance towards the main gate, swordsmen first followed by the musketmen. 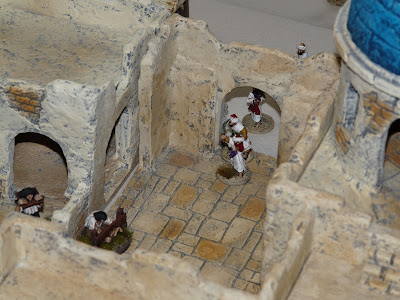 The Arabs are first through the gate rushing towards the shackled prisoners. 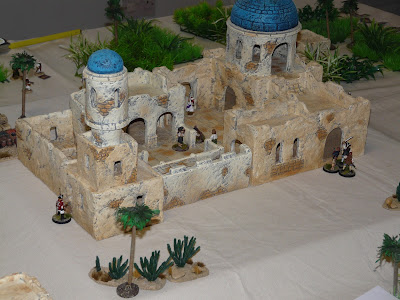 Midway through the game and all sides have reached the complex walls, the Arabs are in the courtyard, whilst the Marines and Pirates struggle to clamber through doors and windows. 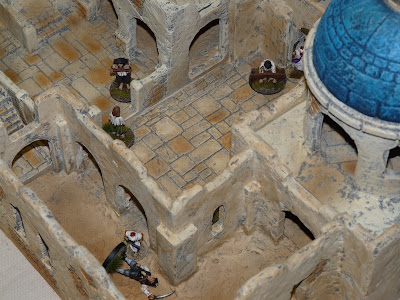 The Arabs grab themselves a prisoner and drag him to the main entrance, the first Pirate to enter the building is dispatched by one of the Arab Swordmen. 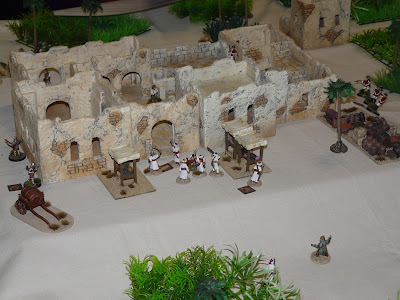 As the Arabs flood the main gate both Atlantians and Marines fire into their flanks looking to grab a prisoner as they leave the compound. 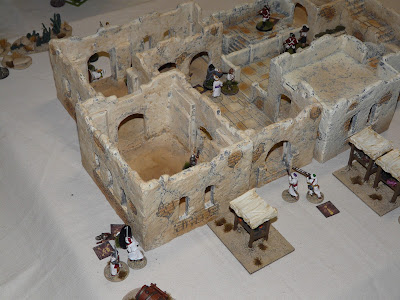 Meanwhile in the courtyard things are hotting up the Marines have grabbed a prisoner and are heading back to their entry point, meanwhile Pirate and Arab fight for the remaining detainee.
The Atlantians are set upon by the Arab defenders hacking him down. 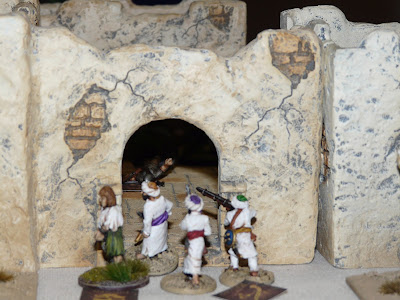 With Blunderbus and Musket fire echoing through the adobe compound the Atlantian Officer to shot down as the Arabs grab the third prisoner and push him through the open door.

A cracking evenings gaming it could have gone to any one player, but in the end the Arabs won the day grabbing two prisoners to the Marines one. The Pirates and Atlantians were left with nothing....
apart from a number of casualties...
Cutlass! and it's unique reaction rule mechanism keeps the game flowing and gives every player the chance to take the initiative which is important for a 4 player game of this nature.
Definately a must for those less serious club nights....
Posted by Stuart S at 16:35 13 comments:

Ever since picking up some of War Rockets space fighters several years ago I have been on the lookout for a decent set of Space Combat rules - Well Ganesha Games latest offering on Kickstarter just might do the trick.

Star Eagles is a science fiction action game of futuristic space fighter combat that allows you to play out the battles from your favourite books, movies, and TV shows. In a standard game, each player controls a squadron of 4-12 ships competing in exciting, objective-based missions in space, on moons, and in the atmosphere of planets. The game is easy to learn, yet tactically rich with many options that provide variety without bogging down the pace.
Players build their squadron from a variety of small craft ranging from nimble, yet fragile, light fighters all the way up to larger gunboats and corvettes. 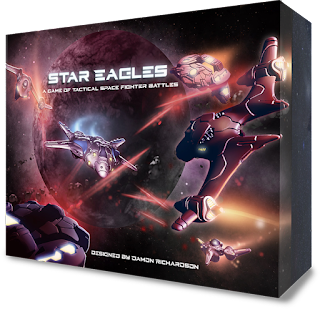 With what appears to be a standalone ship building element I should be able to draw up stats for the Flash Gordon Fleets, although Ganesha will be producing two full sets of miniatures representing the two main adversaries, the mysterious and technologically advanced S’Sekai, and the loosely aligned Confederate Stars, made up of former earth colonies and a few independent alien homeworlds.

The Kickstarter campaign is already fully funded and has a planned shipping date of September 2017. You can back it Here.

Flash Gordon and Fighters from Frigia


Wyvern Wargamers have an open day on Sunday 25th June, why not come along and enjoy a days gaming in the vale of Evesham, this year the theme is rulesets by Osprey publishing.

For those gamers who have not come to our open days before, you will find us a friendly club with plenty of room to lay on those big games. We have space for plenty of gamers to join in the fun with games already confirmed covering Lion Rampant, Dragon Rampant, Honours of War and The Men Who Would Be Kings.

If you are interested in joining in or laying on a game drop me a line on the blog or at the club address.

Previous events can be found here.
Posted by Stuart S at 16:10 2 comments: