Sunday night saw a further outing for Dane's Squad Leader in Miniature Project, I had fond memories gathered round the kitchen table with bags of counters, it some how feels more daunting in 15mm....

I was given the following brief.
You are Captain Haymann with what is left of  the 10th SS Frundsberg Div.
You are positioned at a farm resting just outside of Vienna when HQ inform you that a Russian attack has left the front line in a fluid state.  And you must hold your position at all costs. 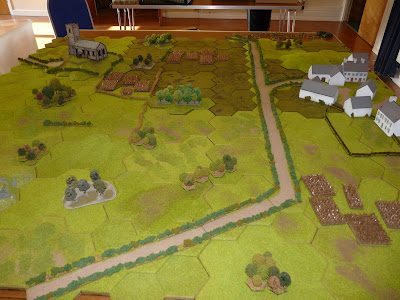 The Farm can be seen on the right of the picture, I was able to deploy along the road but was unsure of the entry of the Russians, the only thing I could guarantee was that there would be plenty of them.
I had the following at my disposal. 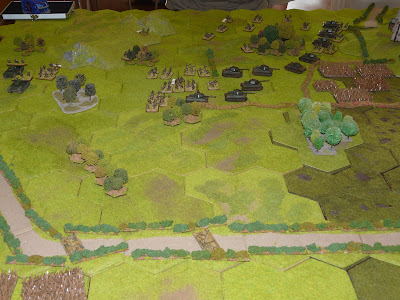 The Russian's burst on to the table across my front driving for the high ground and the Church, my hull down PZIV H and Stug opened up but scored no hits. The German MG's opened up on the Infantry suppressing a number of advancing infantry, I was now about to faced the massed ranks of Russian T34's and KV1's. 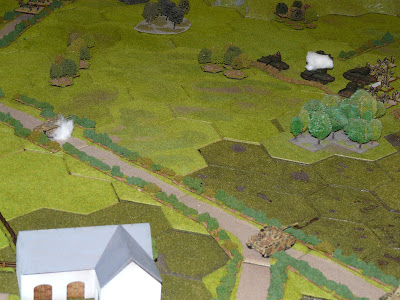 My hull down position was to save me on several occasions with the Russian players constantly hitting my armour but the shell landing in the banks of the hedge row. Unfortunately I was unable to score any significant damage on the Russians eventually my luck ran out. 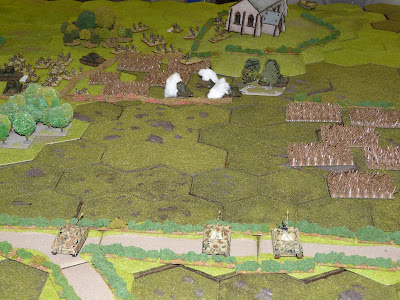 Better luck on the right, I had gambled by putting my panthers in one central location and they were able to destroy a whole platoon of Russian Armour, their superior armaments and quality slowing the Russian advance. 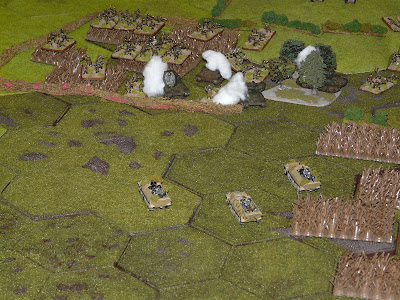 Being German I thought I would be really cocky and throw my Hanomag's forward hoping to mop up the Russian Infantry, unfortunately Russians in the corn field were hard to hit and the nasty Russian Armour turned the halftracks into scrap in under 2 turns. 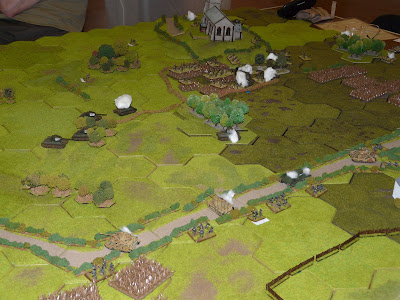 The sneaky Russian's having cleared the corner of the main road sent a KV1 roaring down the straight out flanking my armour in the hedge row, the valiant Battle Tank dodged 3 Panzerfrausts before being taken out by the forth shot phew.... 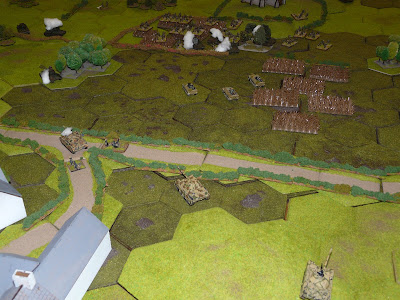 The game drew to a close with the Russia's down to 3 tanks, they had cleared the road of armour and in the final turn took out one of the Panthers but with the German's still holding the farm and the Russians hesitant in crossing open ground being sweep by MG fire.

A cracking nights gaming...... Helped by me winning although it might be those new dice....
Posted by Stuart S at 18:34 3 comments:

The first of Brigade Games French in Kleber Uniform are complete for the Egypt Campaign, painting has been curtailed recently due to the hot spell. But I am pleased with the results and they will certainly help Monsieur Canard given his most recent predicament. 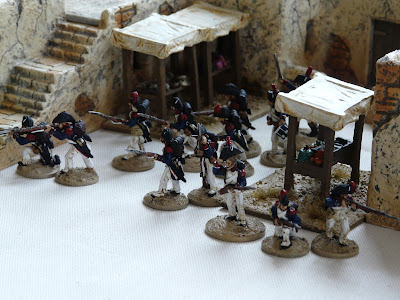 The French sweep the market looking for bargains.... 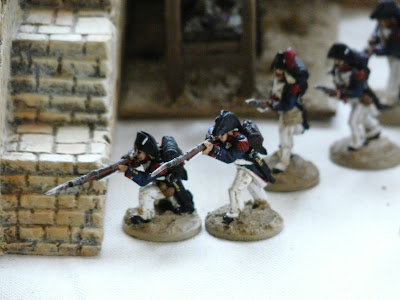 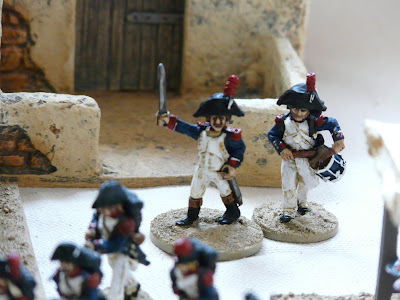 The French Colonel urges on his troops from the rear of the patrol. 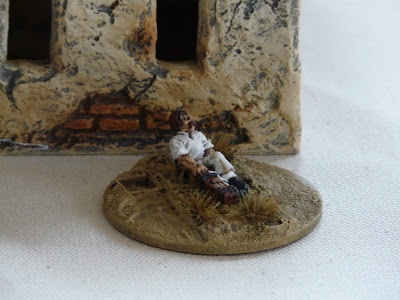 An accompanying shock/low ammo marker for the French, originally from Foundry's Zulu war range, but he does have a touch of the Frenchman about him.

What Arab town would be complete without a market, motivated by Phyllion's excellent blog.
Check it out here... Diary of a Gaming Magpie

I thought I would set about building my own, I originally planned on BlackCat's stalls, but came across these cheap on ebay from the Miniature Building authority.

They are a little bit on the rough and ready side and the ready painted look needs a little touching up, espically the roofs and stall content but once based and the canvas roof's repainted I think they come up a treat.
Besides £7.00 for three stalls feels like a bargain you would get down the bazaar... 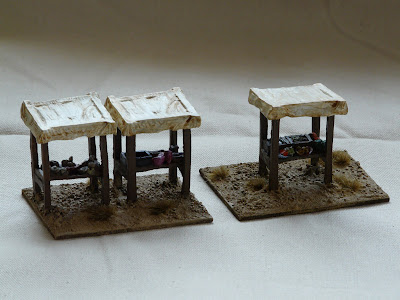 When do I change Dice ?

We all have that guy at the club who is really lucky, he seems to pull a 6 out of the bag just when they are needed and it never matters whether its a low or high score that's required, those scores just keep on coming.

I must have had the same dice now for 10 years, to be honest never really gave them a second thought sometimes I win, sometimes I lose, was it bad generalship or bad dice?
But recently the old favourites seems to be under performing. 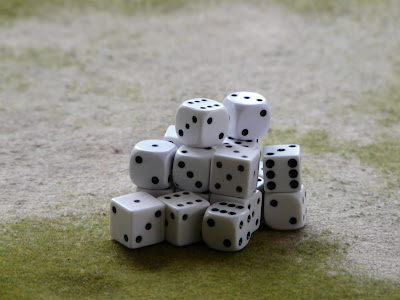 By chance I met up with a friend of mine over the weekend who also plays plenty of Golf (how does he find the time whilst painting 000's of 15mm Napoleonic's ???) and we got talking about changing clubs to improve his game, golf is not really my thing but it did lead to an interesting conversation about changing dice, he has thought about this in far more detail than I ever thought possible, he has tried the lot, dropping them in a different way, from a closed fist, rolling them from an open palm, a lucky cup, dropping them on to the table, a dice tray.
Fresh dice, Pearl Dice, Ivory Dice, Gem Dice yet he still seems to get more 1's than 6's.

Now I don't want to over egg this issue but I have sensed a creeping feeling of impending doom every time the dice are rolled recently..... :-)
OK more a nagging doubt..... :-)

When I look at the old dice I remember those low ammo rolls, that Charge that never went in and the Warlord falling over just as he was about to land that fatal blow.

So I made a rash decision, I would buy new dice! 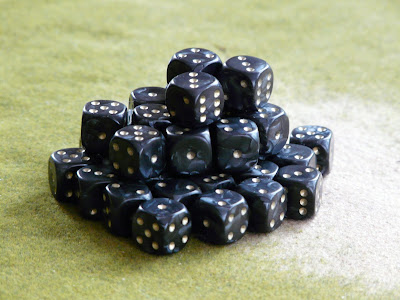 Time will tell if these new dice are any better than the old ones, still 6 sides, still the same size, ok a different cover.

Was it the dice or was it the fact that I needed a shot of confidence in my dice rolling.
As Napoleon said.

So in an earlier posting you were introduced to Ensign Claude Canard and his Friend and mentor Ensign Côtelettes de Mouton of the French Sloop "Le Vendeen" a parody of all things Sharpe and Hornblower.

Sailing ahead of the French Fleet they Canard lands in Egypt and are some of the first Frenchmen to reach land fall.... After marching from the coast, the French Advance guard under the command of Major Cendree  reach the walled town of Aulieoup securing the town would secure the region and provide the French with a secure base for operations together with rich pickings for the men to boot.
The walls look pretty thick to much for the light artillery to breach, but they would make short work of the outer gate and barricade that had been thrown up to slow the French advance. The outer gate was soon cleared and the French advance into the inner courtyard where they were greeted by a second barricade, manned by Ottoman's, the guns were unable to get line of sight and the French under Major Ceedree were taking heavy casualties from the front and flank.

Ensign Claude Canard and his Friend and mentor Ensign Côtelettes de Mouton of the French Sloop "Le Vendeen" looked on from a nearby dune witness to the faltering attack and decied to act.

Canard has noticed that a section of the wall is undefended. The Local Bey’s men have largely shifted to join in the killing around the gate, our action starts as Canard and members of his ships crew supported by some line infantry climb a small stair case to reach the roof tops, breaching the walls of  Aulieoup. 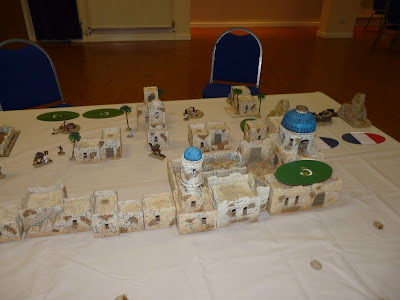 The table, the French main force can be seen on blinds on the far right of the table.

The French must seize the dome adjacent to the barricades to force the gate and allow the main force to enter Aulieoup. 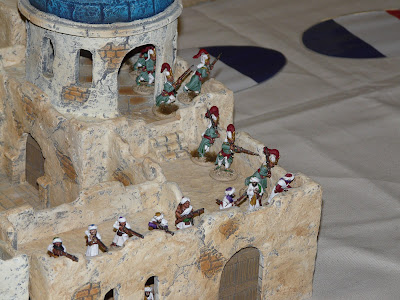 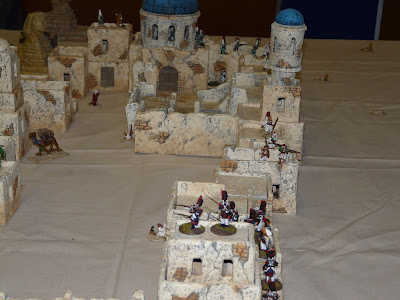 Our action begins as the French climb the stair well and reach the roof tops flanking the Ottoman defenders, poor dice throws make the advance a painful affair, the local Egyptian garrison begin to react to the advancing French sweltering under their heavy blue jackets. 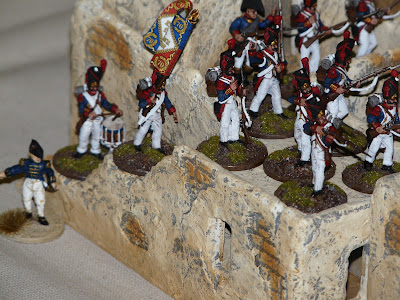 The advancing French with Canard urging them on from the rear !!! 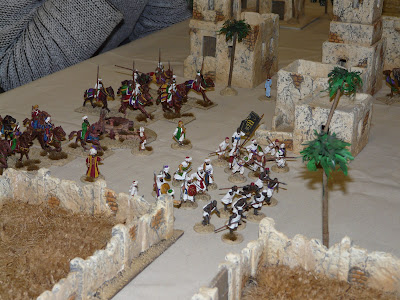 The presence of the French on the roof tops has triggered additional reinforcements for the Ottoman's who pour forward keen to engage the French, although how a horse is going to get upstairs remains to be seen? 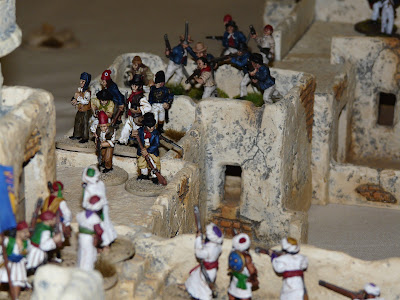 Ensign Côtelettes de Mouton leads the charge as the Ottoman's make a stand at the corner of the first compound. The first Ottoman elements flee the roof top their Status I bigman unable to hold against the aggressive sailors and their array of weapons. 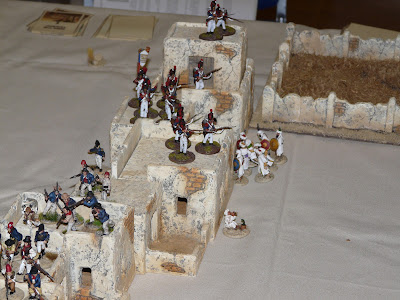 Meanwhile at the far end of the wall the Arabs in the town attempt to force there way into the buildings and up through the roof hatches to get at the French attackers who appear to have found themselves in a spot of bother with damp powder, it must be all that salt water. 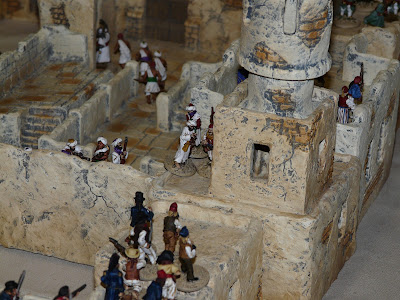 The French push their advantage but the Ottoman's continue to bring troops to bear from the main defences. The sailors despite their aggression in hand to hand fail to break the Arab defenders. 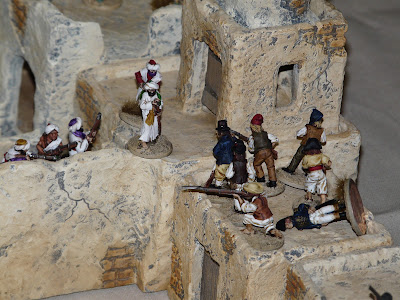 Ensign Côtelettes de Mouton takes a musket ball to the chest and falls to the ground, seeing his Friend and mentor fall and about to be set upon by a group of sword waving Turks, Ensign Claude Canard rushes forwards with a detachment of sailors to shield Côtelettes de Mouton from the advancing Ottoman's but in the melee he too takes a wound falling to the ground as he begin to blackout the curtain falls on this episode.

Well there you have it you go to the trouble of designing a campaign and scenario, paint a load of new figures and you fall foul of the curse of newly painted figures....
Stay tune for the next adventure of Ensign Claude Canard and his Friend and mentor Ensign Côtelettes de Mouton of the French Sloop "Le Vendeen"

Email ThisBlogThis!Share to TwitterShare to FacebookShare to Pinterest
Labels: AAR's, Napoleon in Egypt, Napoleonic, The Adventures of Claude Canard of the French Sloop "Le Vendeen", Too Fat Lardies

How do you eat an elephant?

How do you eat an elephant? One bite at a time.
I guess we all know the saying, but sometime fail to apply it, last week has to be an example of seeing the whole elephant. Having had limited time over the last few weeks, I thought I would get the basing done on the next items due to hit the painting table unfortunately as I sit here now looking at the masses of metal and MDF, I am thinking that perhaps I should have brought them out one item at a time.

I might just have to go back to plan B and hide them from sight until the first items are complete.... 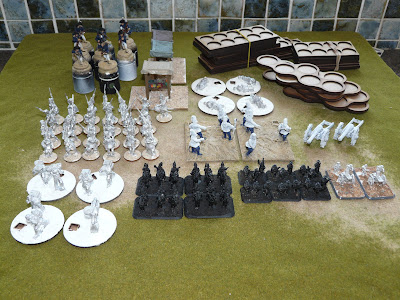 In no particular order, additional movement trays for the Russo Japanese and Egypt Projects, Cavalry and Naval Brigade to bolster the War of the Worlds Home Front Forces in anticipation of All Quiet on the Martian Front coming out in December. Market Stalls to add some flavour to my Arab town.
Old Glory Nazim-i Cedit Infantry and Artillery to increase the Ottoman strength in Egypt, French Infantry to keep them at bay, together with shock and low ammo bases for the Russo Japanese Project.