All Hallows Eve is nearly upon us, so time to raise the dead and dust off the Elizabethan forces for a club zombie outing. Three groups of the living, The English looking to rescue their comrades from the clutches of the evil Spanish, The Spaniards have landed in England looking to cleanse the land they have heard rumours of witches holding the locals in their evil grasp and finally the locals seeking to secure their food stocks before the opposing armies loot them.... 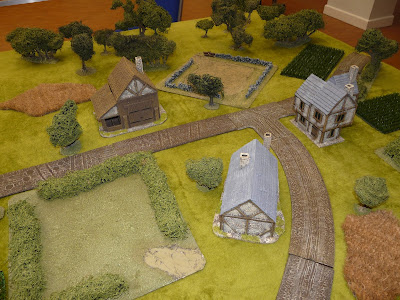 The only problem all objectives are in the barn unknown to each player.....

Each player selects a table edge to approach the village, no cadavers are in sight, but each player is aware that the village is surrounded by six burial pits and any noise will awaken the dead. 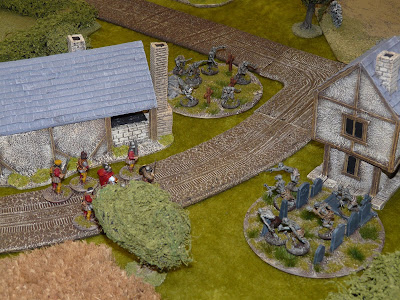 The Spanish head down the road on mass believing in safety in numbers. However this only serves to awaken the plague victims as the ground gives up the recently passed. 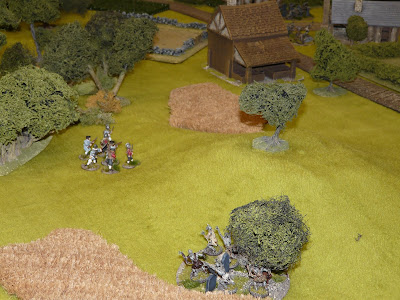 The English fair little better as the burial mound spits out its content driving them towards the village. 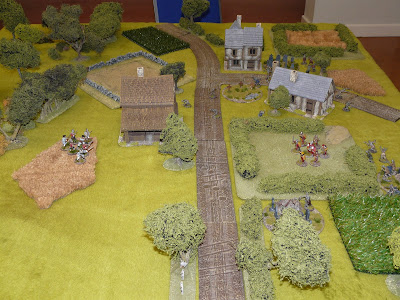 The English head for the cornfield looking to hide amongst the corn, out of sight and ear shot.
Will the dead lose interest? 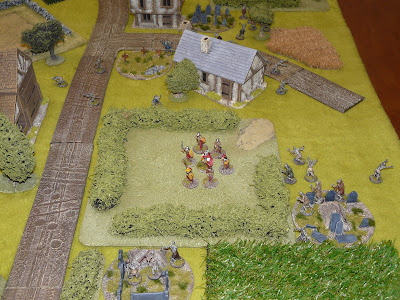 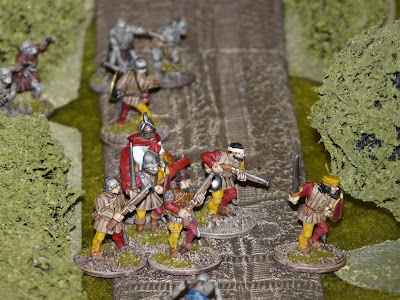 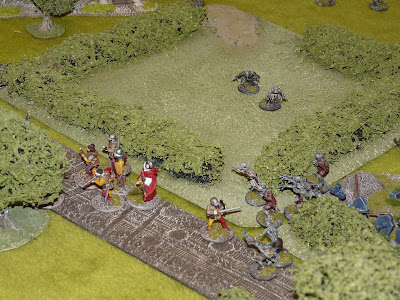 Meanwhile the Spaniards greated by a wall of zombies outside the blacksmiths make a dash across the enclosure, looking to lose their opponents, however this triggers a further plague pit, many of the Spaniards slip past but one poor soul is caught. 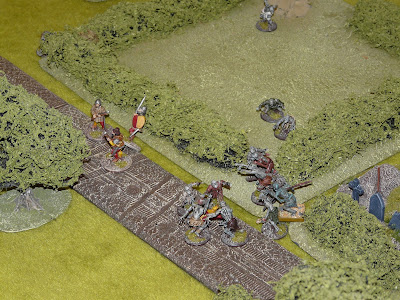 Taking several of the dead with him Pedro falls and the zombies are briefly distracted as they feast on their opponent. 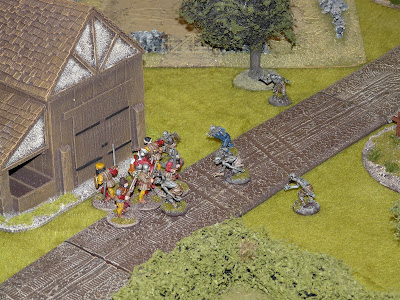 The forces of Spain reach the barn doors first and whilst battling the dead hack at the barn door without success the noise echoes across the village. 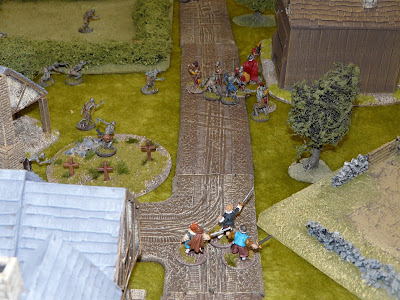 The locals somewhat late to the party rush down the road having seen that the undead were distracted by the Spanish despartely trying to force the barn doors open. 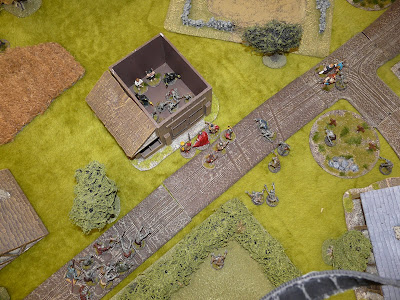 Finally with the dead massing the Spanish finally break the barn door down to reveal the awful truth.... The dead and their foul coven of witches, the dead shamble forwards seeking the flesh of the invaders. 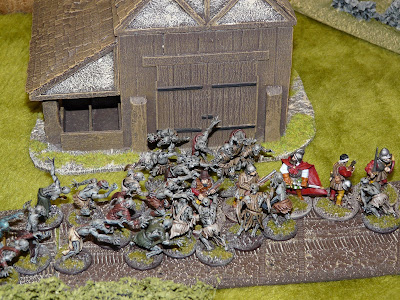 So close to their goal the Spanish are forced backwards by the sheer weight of the dead rushing towards them. With Sword, Dagger and Musket Butt the Spaniards set about cleansing the land. 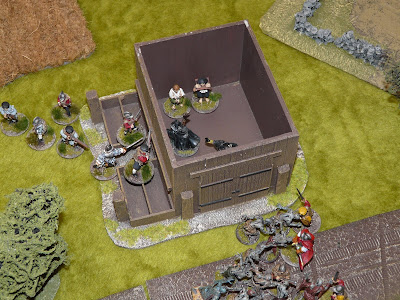 The English seize their opportunity and spotting the side door charge forward firing into the Witches who now have no zombies to protect them and their prisoners. 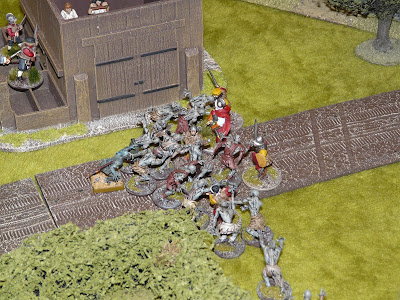 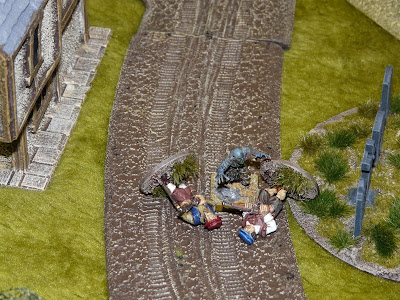 Many of the Spaniards and locals join the ranks of the dead as they struggle in vain to reach their objective as the sneaky English finish off the witches and rescue their comrades. 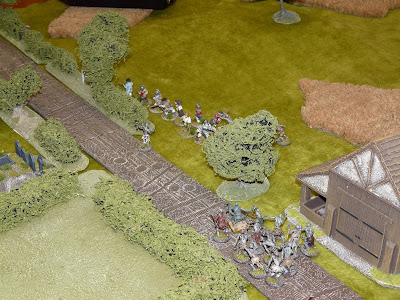 With a number of casualties the Zombies gorge on the recently killed allowing the remainder of locals and Spanish to leave the table to the dead, as the English take their prize and head for home.

A great club game with plenty of fun as each side tried to draw the zombies on to their opponents. Played using LOTR with a couple of adaptions A link can be found here.

It's just a shame no one entered Werewolf Wood :-)

Dux Brittaniarum - The return of the Irish

After the bloody encounter a few weeks ago, time once again to venture into the world of Dux Brittaniarum this time with the Irish taking to the field and an Irish Raider force looking to sack a village on the mainland. 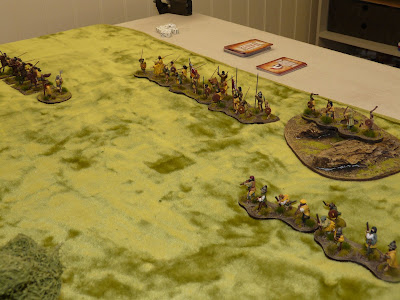 Short of skirmish and missile troops, my Elizabethan arquebus were pressed into service to fill the ranks of the attackers. 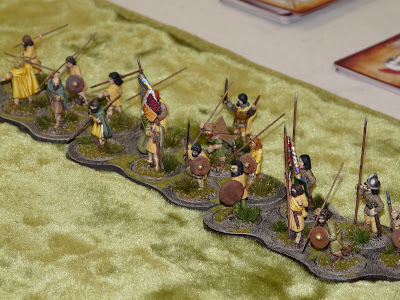 I decided to form all of my raiders into a central block they are pretty niffy in attack but take on shock rather to quickly if caught. 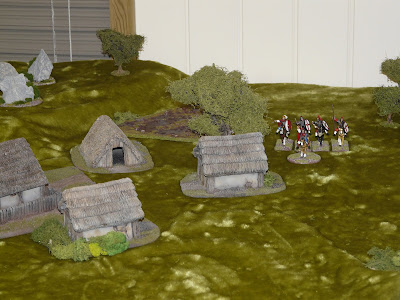 The village looked deserted but then the local lord and his heavy horse made an appearance, freshly painted and looking to crack some Irish heads. 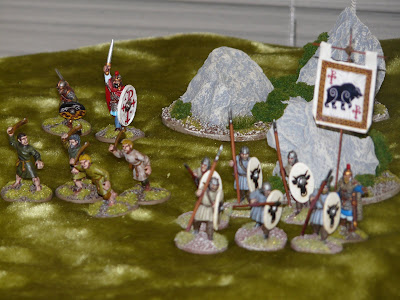 More defenders appeared on the rise above the village, missile men and levy, a quick dart in and plunder was begining to look unlikely. 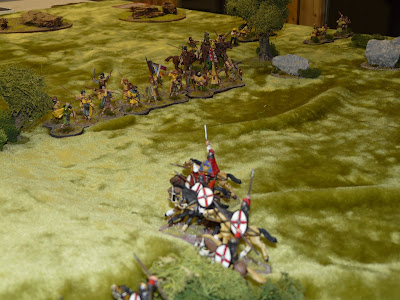 I pushed on up the centre of the field whilst the enemy cavalry moved to take the high ground on the right flank, I had to counter this calling forward my noble cavalry. 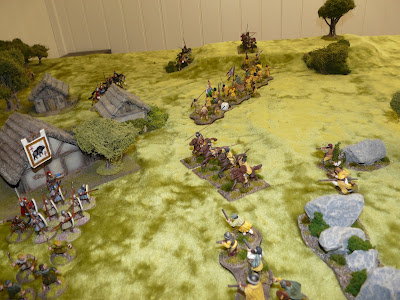 Battle lines are formed. My skirmish units on the left started chipping away at the enemy formation, I can't inflict kills but the shock can break them if you pour enough fire on them. In the centre my raiders face off against the enemy cavalry whilst on the high ground we both stare each other down with our heavy horse. 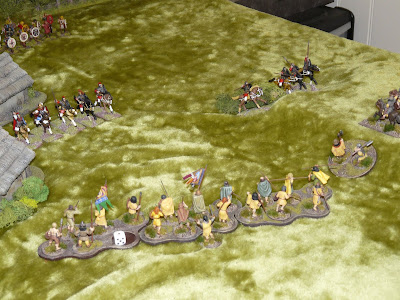 The Irish stand off continues neither side looking to commit, whilst the defenders bring up further foot to protect the village from the raiders. Something had to give. 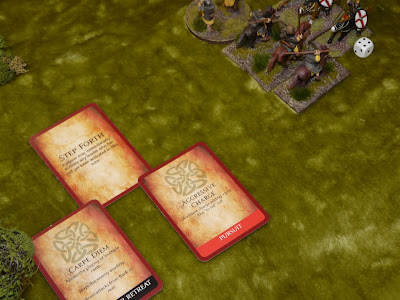 It's not very often that you have the perfect card combination, but every now and again :-)
Now one thing you need to remember with raider cavalry is, the greater the shock the enemy have the more attack dice you get..... ouch.... 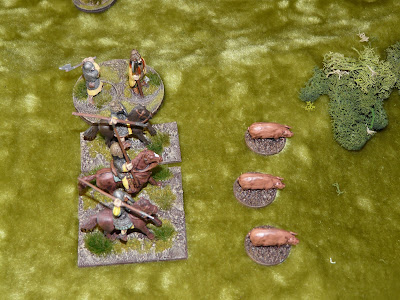 The defenders were slaughtered like pigs!!!!
The enemy cavalry were wiped from the field without any losses on my side.
(Sorry SWF. but I could not help myself and had to include the pic when you went and made the tea.. you should never have left the pigs in the box :-)....) 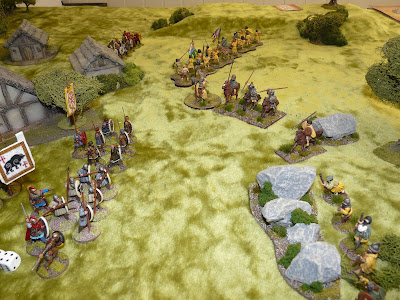 Despite the loss of the noble cavalry it was to be a short lived victory, the raiders faced by two solid shield walls and with most of the skirmish troops having been driven off, the Irish could make little head way in their goal of sacking the village. 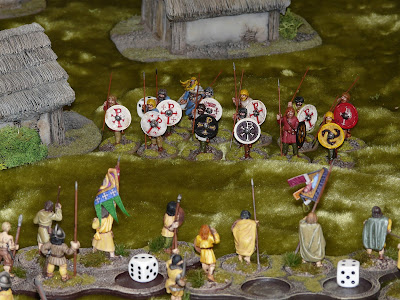 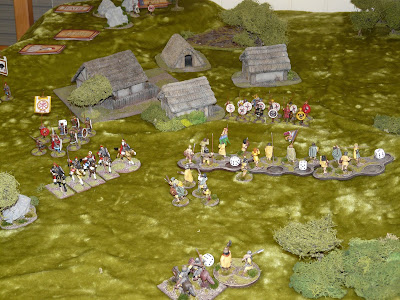 The Irish line contracted and started to fall back under increasing shock. The raiders in a final gamble charged the levy shield wall only to be forced back with multiple points of shock. There would be no loot to be taking home this evening.

Another cracking enounter going on way past midnight... I might even be tempted by some of the new footsore miniatures to bolster the Irish ranks...