Burning the candle at both ends - Haitians complete.

It's amazing what the motivation of a big game can do for your painting efforts.
A couple of late nights and a few early mornings and the Haitian Slave Army is complete six groups, 4 bigmen and a priest..... 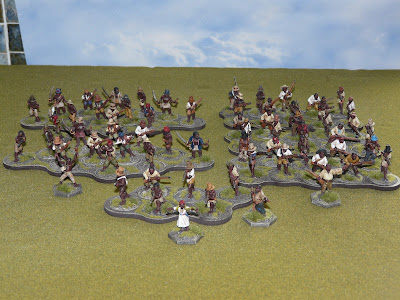 The extra units of Hand to Hand troops should come in very handy, equiped with "Big Choppers" they fight as clan in the first round before reverting to Wallahs. 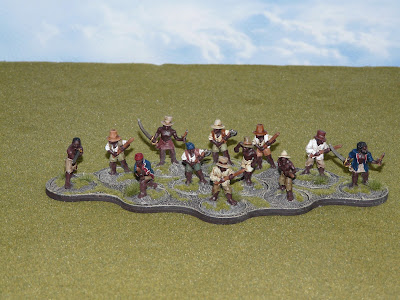 The extra musket troops provide me with three distinct sections good for one decent round of fire if I can keep them under control. 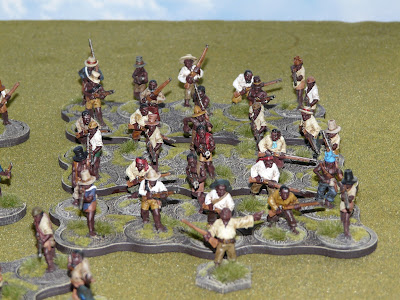 A few extra's to keep my wargaming friend on his toes (more on that tomorrow) and we should eb good to go.
Posted by Stuart S at 22:36 9 comments:

Posts are coming think and fast at the moment.
With the release of Northstar's Congregation, The Bokor, the Mambo, and the Houngan make for great Haitian Insurgent Leaders. Wonderful figures and a pleasure to paint. 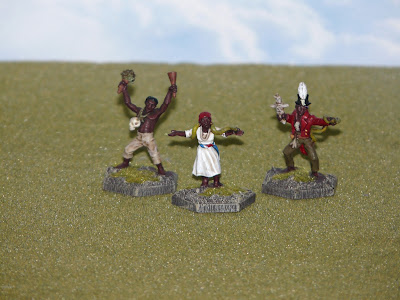 Hyacinthe was a leader in the Western Province and carried a talisman made of horse hair into battle so I guess a snake is not so far away. The female casting makes for a great representation of the young slave leader, I have given her a republic sash to show her revolutionary tendances. 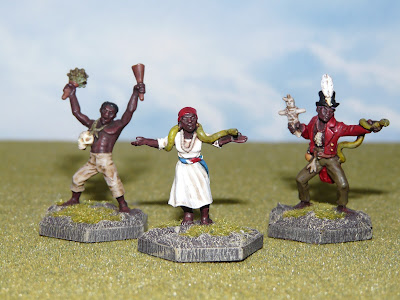 When insurgent leaders were killed, ceremonies were held in their honour. One insurgent leader was buried by the troops that defeated him. But later "the negroes took him up and buried him again with great pomp"

Let's just they last a little longer on the table than in real life.
Posted by Stuart S at 22:46 8 comments:

After the first outing a few weeks ago and after reading a number of additional sources on the Haitian Revolution, I have had a re-think about the various forces I plan on building and there make up within Sharp Practice.
The first up is an insurgent force made up of escaped or freed slaves or perhaps a band of Maroons who lived out in the hills outside of the main plantations. These type of forces fought for the French Monarch, the Republic, the Spanish, the British and their own nationhood very often changing sides depending on who offered the best terms. So plenty of scope for gaming purposes.

Steve over at Arcane Scenery was very helpful and added a couple of specific figures from the Trent range which will enable me to complete the core force and the guys over at Warbases created some 10 man movement trays for the groups.
At this stage I wanted to fill out the ranks but need to get a wriggle on, on the painting front with the first full out less than a week away. 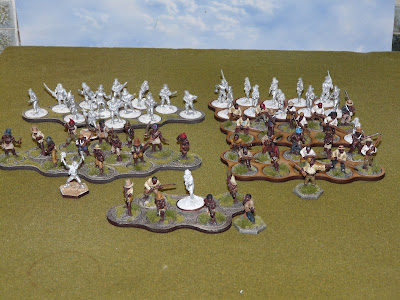 Many of the slaves were from the Kongo tribe in Africa and were lead by religous leaders, one French soldier reported how insurgent troops advanced to the sound of Afrian music or the "Incantations of their sorcerers" so the Big Men need to be a mix of Officer types and Religous Shamen will be needed, which makes for an interesting time seeking out figures which could fit the bill. 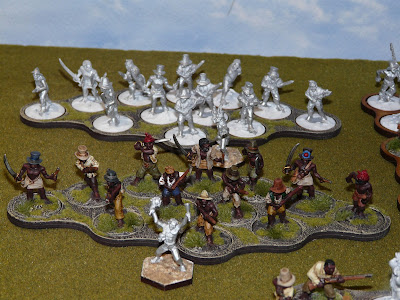 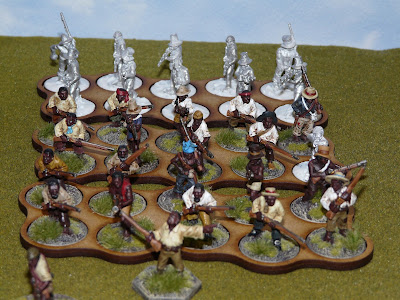 So on to the force composition, I wanted to give them a suitable mass as very often the forces would heavily out number the local garrison and plantation owners but also some flexibility in terms of skirmish and hand to hand troops.

One contemporary wrote of the insurgent forces. "instead of exposing themselves as a group like fanatics they fought spreadout and dispersed and positioned themselves in places that made ready to envelop and crush their enemies. If they encounter resistance they don't waste their energy but if they see hesitation in the defence they become extremely audacious"

With this in mind I went for the following.

Big Choppers: These troops have no ranged fire capability but are very aggressive and well versed in close combat. In the first round of Fisticuffs they fight as Clan rather than Wallahs. 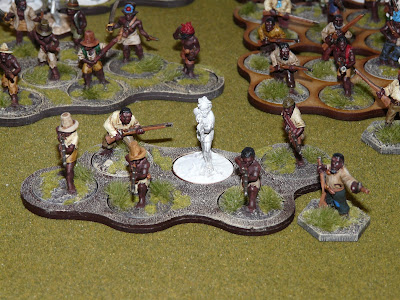 Hearth & Home – May improve Step out rating by 1 when at home, become Weedy Coves when fighting away from home.

Big Choppers: These troops have no ranged fire capability but are very aggressive and well versed in close combat. In the first round of Fisticuffs they fight as Clan rather than Wallahs.
Moveable DP – May be selected as a support option.
Tactical – Can perform Ambuscade when two cards are available.
No Bayonets – These troops are at a disadvantage in Fisticuffs.
With a relatively low force value of 39 points and some very cheap groups it gives plenty of options to add additional units to the force depending on the scenario.

The low quality officers should create a challange reducing shock so they will need to get to grips quickly if they are to make an impact.

Right back to the brushes those Insurgents won't paint themsleves.
Posted by Stuart S at 07:48 1 comment: