Following on from my previous post, Sunday saw an opportunity to play out the Martian invasion of England.

The Martians had broken out from Horsell Common and were wiping all before them. Humanity was on the back foot. As the forces of the Crown struggled to contain the situation, a second cylinder lands on the Isle of Sheppey, the civilians headed for Sheerness in the hope of catching a boat to South-end to avoid the Martian Tripods. 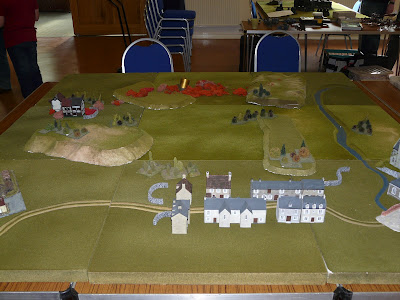 The Village of Sheerness in the bottom of the picture with the Martian Cylinder to the North, the Red weed has already begun to take hold. 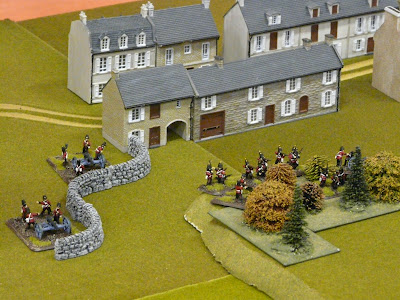 The Crown forces deploy to the front of the village they must hold the town until 9.00pm to allow the civilian refugees to escape the town, 2 of the 4 6lb'ers can be seen - Bows and Arrows against the lightening???? 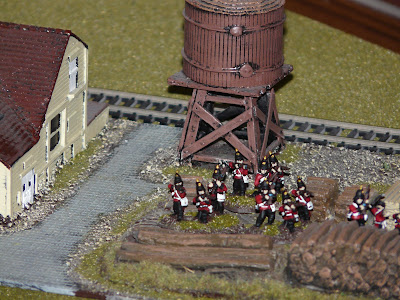 British Infantry hold the wood yard at the railway station. 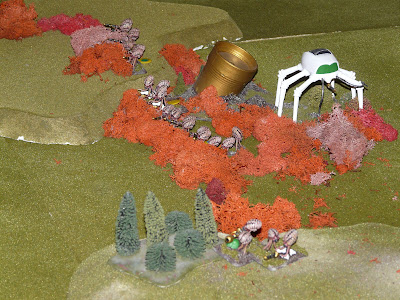 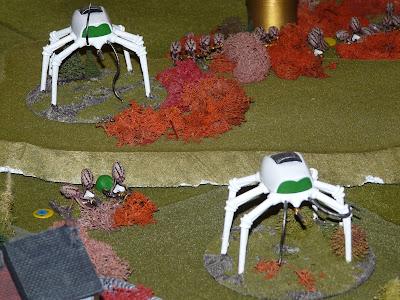 With a second Walker Constructed the Martian Walkers head towards the Human lines, firing black smoke at anything that moves. 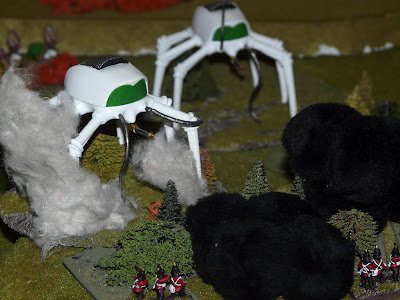 The Crown forces fire from close range with rifle and Gatling Guns, the sheer volume of fire is enough to bring a walker to a halt, it's massive bulk motionless but it's heat ray still sweeping all before it.
The Black Smoke forces the Crown forces to flee towards the safety of the town, hoping to bring the Martians in range of the Artillery. 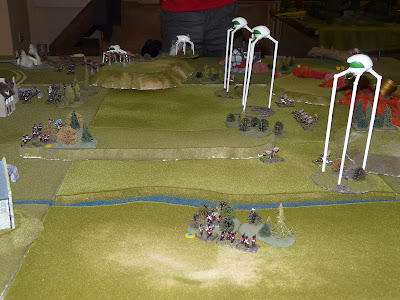 The Martian Fighting Machines arrive and the Human defenders steel themselves for the final onslaught. The pour Artillery and rocket fire on the advancing Martians with limited impact. 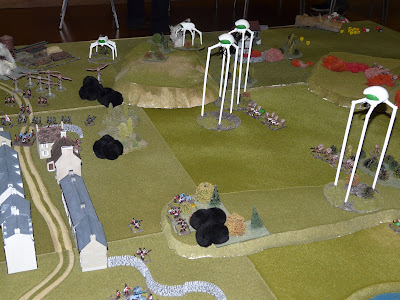 The Martian black smoke begins to fill the battlefield, driving the Crown forces from their defence positions and into view of the heat ray, all is lost and the Martians raise the town.

So another Martian victory looks like we will have to rely on the common cold after all.

We used Ty Bread Fistful of TOWs rules available for free from the web, with a few tweaks from the Martian Empire rule set. The Martians are tough and perhaps need to be ambushed by the Humans to stop it being a rout.....
Next up more artillery to help save humanity.....
Posted by Stuart S at 15:46 6 comments:

Email ThisBlogThis!Share to TwitterShare to FacebookShare to Pinterest
Labels: AAR's, Fistful of Tripods, Sci-fi, War of the Worlds

Wargaming - The War of the Worlds

With my father playing Jeff Wayne's album every Sunday it was bound to happen one day.....

This Sunday see's a return outing for my War of the Worlds collection to the Wyvern Wargamers.
It's one of those projects that I keep coming back to, adding a unit here and there every few months (quarters) 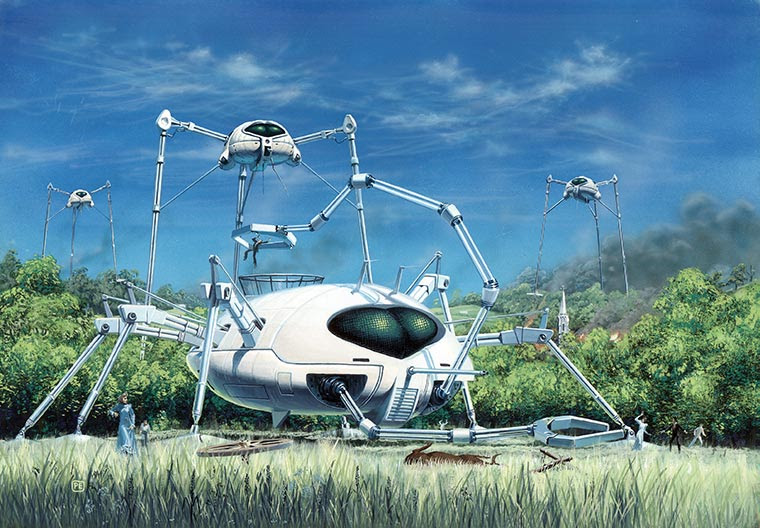 I always wanted to play out the following episode from the album as I figured it would be a great game.

We hurried along the road to Weybridge suddenly there was a heavy explosion.
The Ground heaved, Windows shatterd And guts of smoke erupted into the air


Quickly one after the other four fighting machines appeared, monstrous tripods higher than the highest steeple striding over the pine trees and smashing them, walking engines of glittering metal each carried a huge funnel and I realized with horror that i've seen this awful thing before.

A fifth machine appeared on the far bank, it raised itself to full hight flourished the funnel high in the air and the ghostly terrible heat Ray struck the town.

The six guns we have seen now fired simultaneously decapitating a fighting machine
The Martian inside the hood was slain splashed to the four winds and the body nothing now but an intricate device of metal went whirling to destruction.

As the other monsters advanced people ran away blindly the artillery man among them
But I jumped into the water and hid until forced up to breathe.

Now the guns spoke again but this time the Heat Ray sent them to oblivion...."

So Sunday's scenario is as follows.

Human Commander.
It is the summer of 1880 and the green flashes from Mars have stopped, a number of cylinders are reported to have landed in Britian.
An initial attack on the first cylinder at Horsell Common, near Woking was repulsed with heavy losses. The intelligence reports talk of a giant walking tripod machine that was created within the cylinder.

Reports are coming in that a similar cylinder has landed in your sector.
Your primary aim is to prevent the building of any Martian tripods and to try to eliminate the Martian threat.

Martian Commander
One of your capsules have landed some way from it's original destination but has managed to successfully build a walking machine. You need to defend this site until additional forces can come to your aid and the domination of this Blue-Green planet begins.

Email ThisBlogThis!Share to TwitterShare to FacebookShare to Pinterest
Labels: AAR's, Sci-fi, War of the Worlds

Ok so it rained on the bank holiday, but it did give me a days painting and a chance to make in roads into the Irish Saga War Band.

First up the Gallowglass or Heathguard under the SAGA rules. 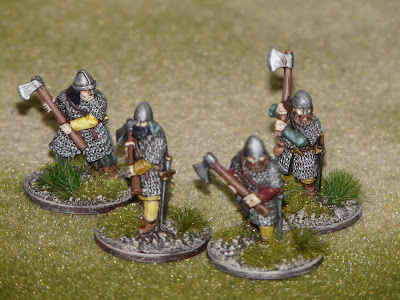 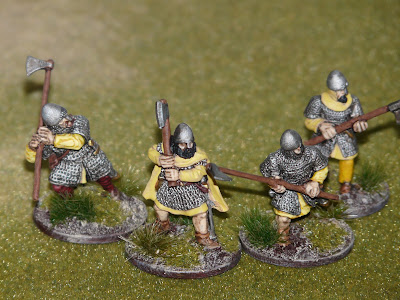 A mix of Gripping Beast and Crusader Miniatures.

Next the Irish Wolf Hounds, I still have the handlers to paint but have completed a Redoubt Gallowglass leader to accompany them for now. 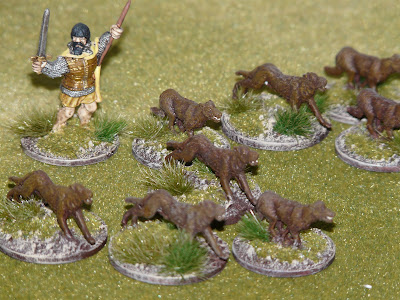 And finally the beginnings of the Chieftain Command Group, I have a couple of leader types just not sure who I should use, the champion from Crusader (R) is a cracking looking figure. 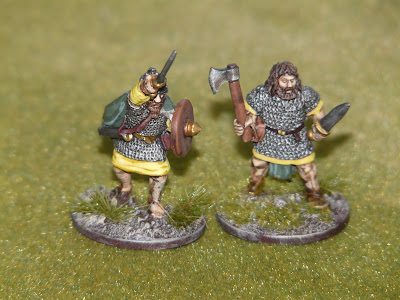 To achieve the Saffron colouring common amongst the Irish of the age I used the Foundry Ochre, Yellow and Buff paint sets, with a smattering of Phlegm to give than a range of troop colours.

Whilst hunting around for suitable figures, I did consider the Gallowglass available from Redoubt and Sgt Major Miniatures but was unhappy with the quality.
No images of the Redoubt figures are available so I ended up ordering blind, they are fractionally larger than the other manufacturers and have lost some of the detail over time, whilst the chain mail vest above the knee looks right, their is just too much hair...

I attach a couple of comparison shots below for any one else thinking of ordering in the future. 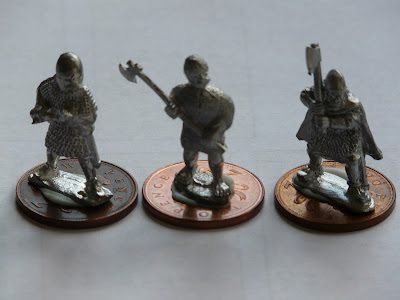 Sgt Major or Vendel as they used to be in the UK have the perfect style figures, but the models appear to have worn over time, the casting lines are not as crisp as they once were the axes come loose but the hands will need to be drilled in order from them to fit as the casting has sealed any sign of where the holes once were. 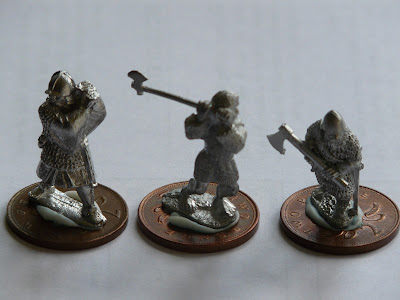 I am left with the dilemma on where to go with historical inaccurate figures but better castings vs more accurate figures but poorer quality in terms of castings.....I will paint them up hopefully inking, shading and a decent base will improve the figures....

Over at Wyvern Wargamers we have caught the SAGA bug.

Never one to follow the crowd, I thought I would adapt the Welsh Army listing to create an Irish Warband for SAGA. I am several months behind the rest of the club but as usual have been distracted by other shiny items.

I have a plan and am keen on finishing the complete army in one go, which seems achievable given the number of  figures required, although I have never yet done that with any wargames project.

So after a few weeks delay due largely to lack of room on the paint table, the Saga Irish are assembled, I have enough to generate 5 or 6 points depending on troop choice. 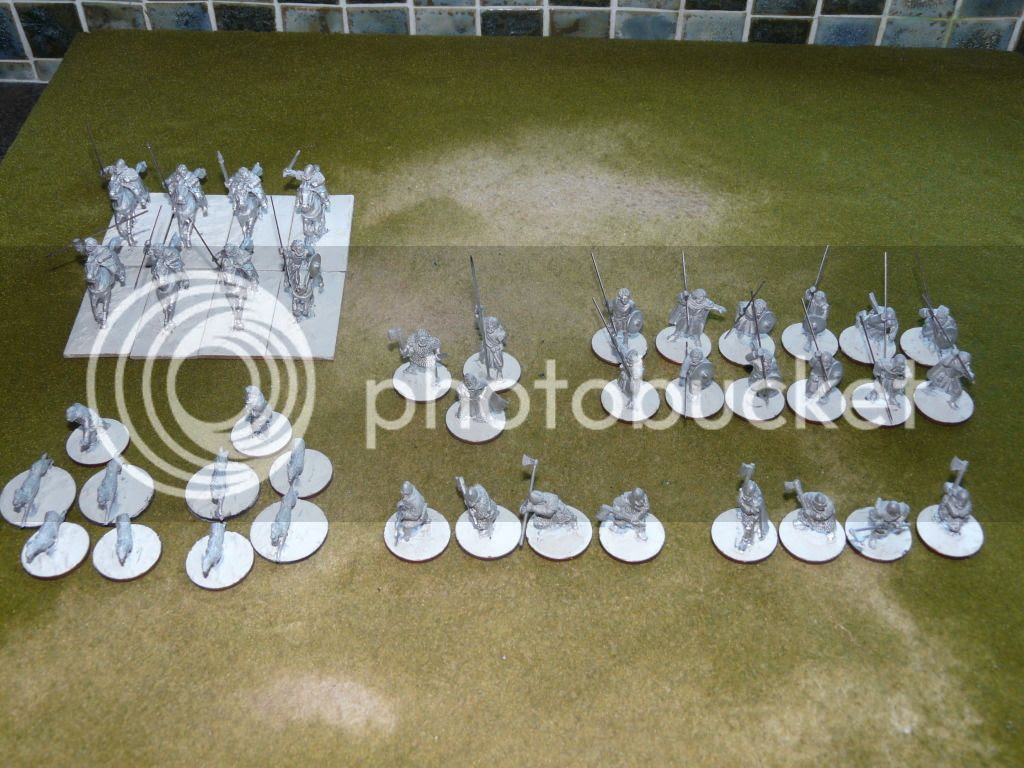 The Warband in full is made up a collection from a number of manufacturers, including Crusaders Irish range, Gripping Beast various Picts, Scots and Irish, together with a number of the viking range for the Gallowglass (Heathguard). I picked up some of these from both Redoubt and Sgt Major Miniatures more on these on a late post.

I thought it would be useful to display them in bare metal for starters to record my efforts over the coming weeks. 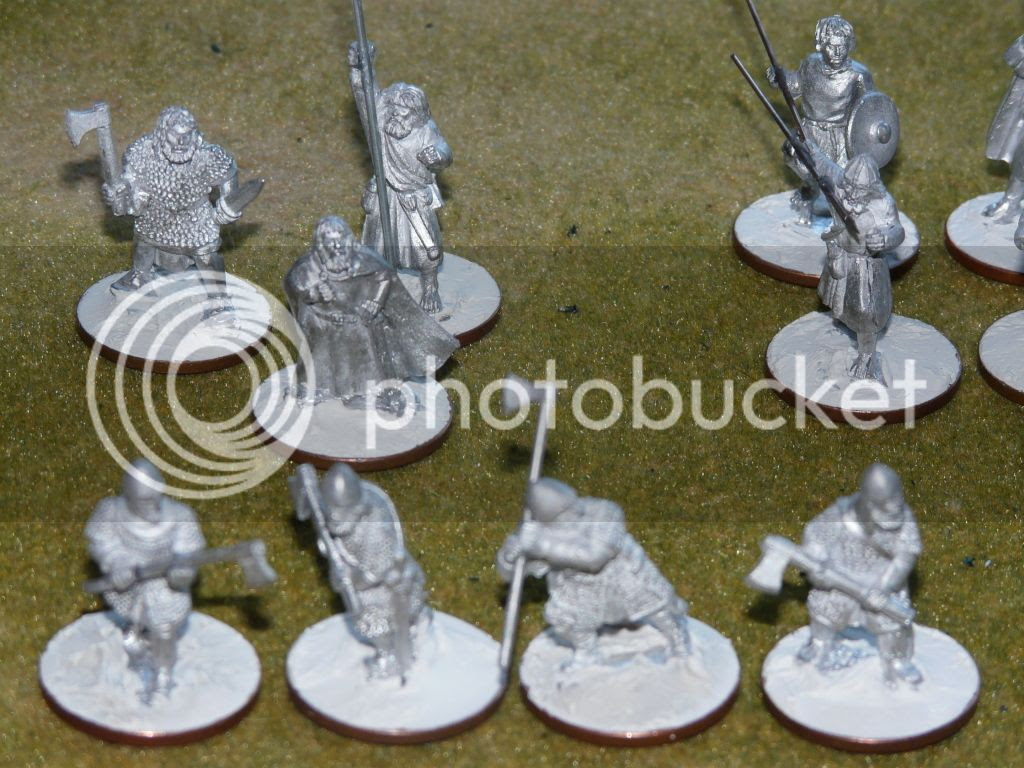 Close up to the front the Gallowglass with their double handed axes, these will be my Heathguard unit. Whilst they lack historical accuracy or the more traditional Irish look and feel they are far better castings that others on the market.

I decided on keeping the Faction leader separate for now so I can use the figures in separate gaming systems, but am considering creating a circular base to drop the figures into. to make the command base. 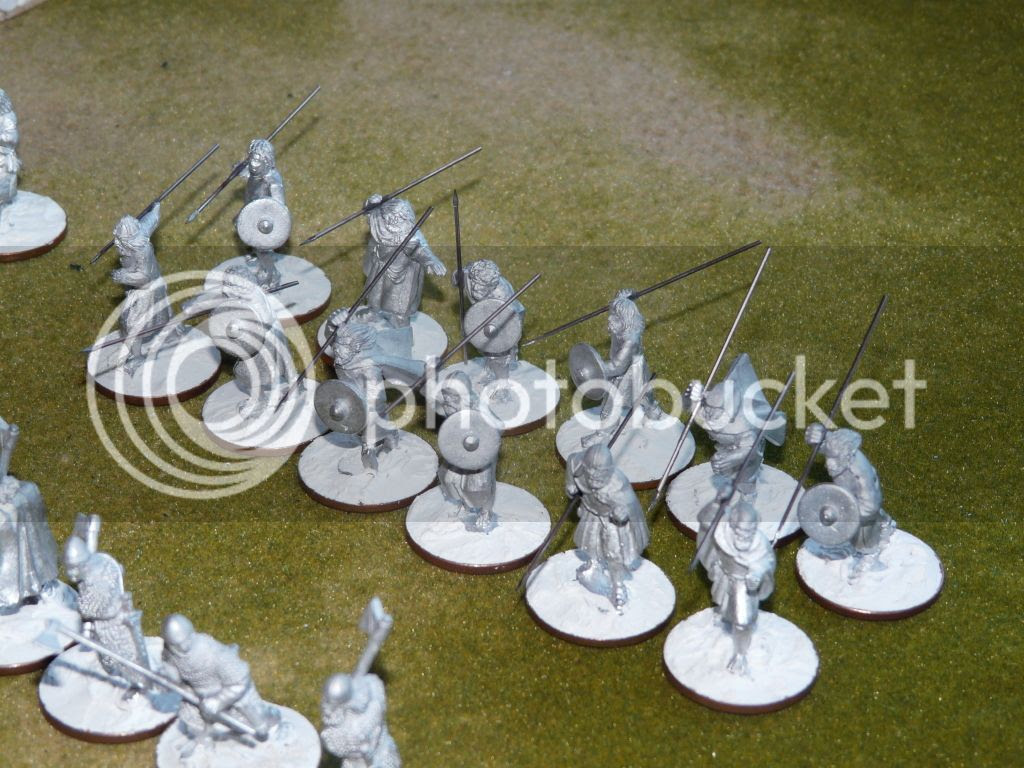 The Irish Kern/Levy with Javelins, a mix of Gripping Beast, Irish, Scots, Picts and Germans, in short anyone with a cloak of sorts and bare legs. 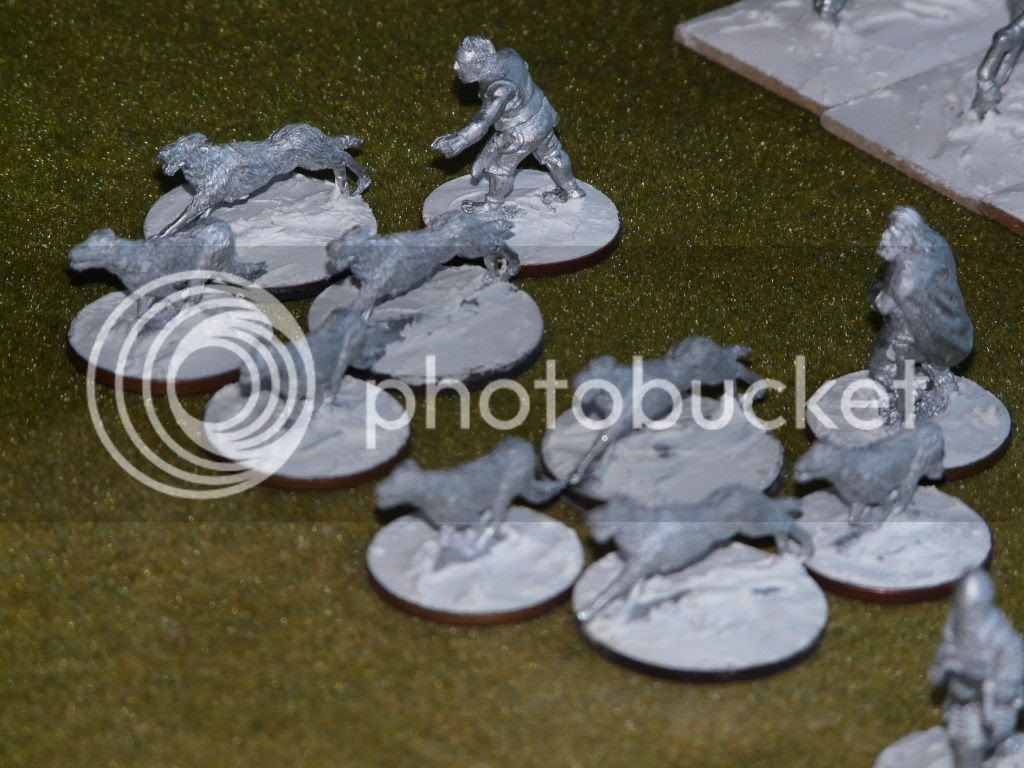 Irish Warriors, well in this case war dogs, not sure how I make rules for these, but neither the less classic Irish troop types, Crusader Miniatures, I suspect these will be first on the paint table just because they will be quick. 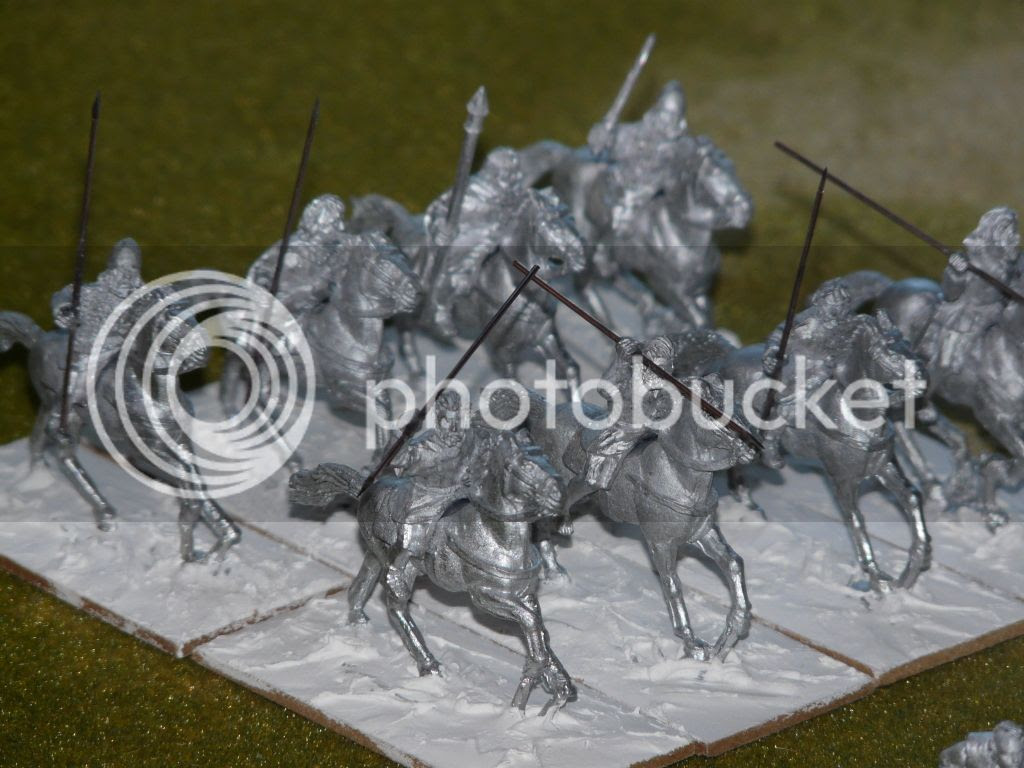 Irish Cavalry Javelin armed and could be 1 unit of warriors or 2 Heathguard. Crusader Scots.

I planned on a painting them largely a Saffron colour with a few with of dark greens, burgundy and light yellow under shirts.

Having only played SAGA once (I told you I was behind the others), I would be keen to hear from others players, is this a balanced force, what should I add?
Posted by Stuart S at 07:22 2 comments: