Nice to get the freshly painted figures on the table so quickly.

I have been itching to give the rules a run out for a number of weeks, Joe's previous offerings always make for a fun evenings gaming and Silver Bayonet is no different.

One with the game.

The scouting party in the clearing spotted movement in the tree line, they had to move swiftly if they were to the find the missing orders before the local wildlife payed them a visit. 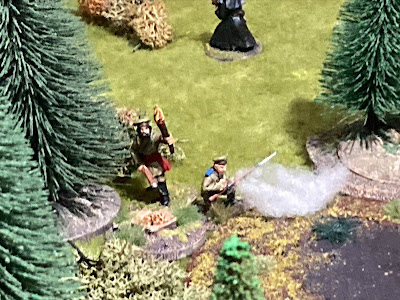 The two privates unearth the first clue marker and instead of finding a clue they find themselves a Werewolf - Gulp. 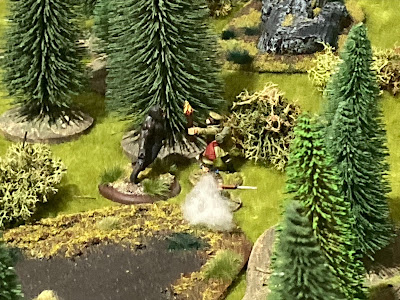 Meanwhile on the other side of the clearing as the full moon rose a wolf turned into another Werewolf, things were starting to look bad already for the patrol. 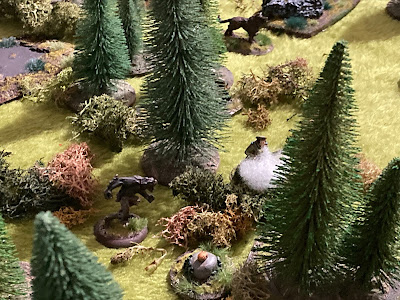 The Russians fell backwards as the wolves rushed from the forest, a number of the men had been wounded and they had burned all of their Fate dice reducing the damage from the attackers. Father Gregor had been busy healing this comrades. 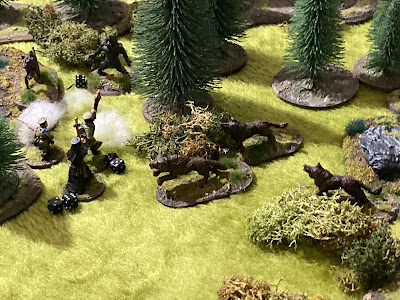 On the far side of the clearing the Captain lead a counter attack into the charging Werewolf. One of his men had already fallen to the wolves who sensed more blood. Egor squared up and swung his axes. 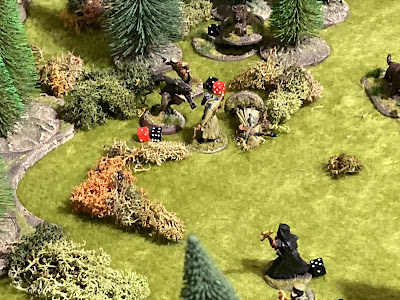 Just as things were beginning to look bleak the wounded troopers who had finally beaten the original Werewolf unearthed the missing orders and were beating a hasty retreat. 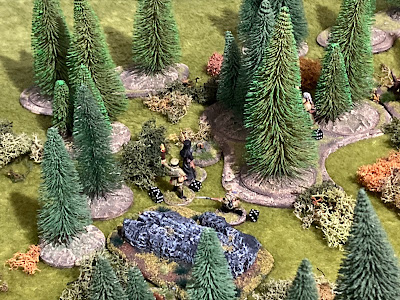 The valiant Captain was struck down but not before he killed the Werewolf. Egor swung his mighty axes, hacking at the snarling beasts. 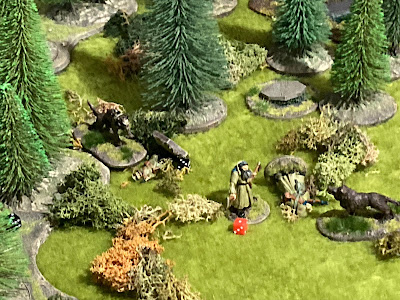 For a first encounter it seemed a mighty hard, or was it the curse of freshly painted figures?
Silver Bayonet seems a little more balanced than Stargrave/Frostgrave. There are less wandering monsters but they are that little bit tougher than previous games and I suspect players will be less tempted to fight each other but rather deal with the monsters first.
The rules are easy to pick up rolling 2 dice against a target number, with the option to counter attack or duck back. There is a fast pace to the game and you are certainly to encouraged to get stuck in rather than sitting back and firing at distance.
A great new feature is the Fate Pool, a number of dice allowing you to re-roll, lessen damage to yourself or make monsters more potent, quickly reload or point the creatures towards another unfortunate soul.
The scenario's are well balanced but do suffer from a couple of minor niggles mostly around the scale of terrain or monsters encountered, I have some odd stuff but Pixie's or Living Scarecrows? I certainly don't have galleon for the 10th scenario.
Let's see what a two player game brings.....
Posted by Stuart S at 18:29