Back in 1998 Rage software brought out a real-time strategy game for the War of the Worlds, I must have spent many a late night hunched over the PC screen cursing those bloody tripods...

It came with a very nice campaign system similar in style to the Total War series of games, it reminded me of the Sport of Kings campaign element of - Warfare in the Age of Reason - Seven Years War Rules - The challenge was to tweak the campaign rules with the Rage software for table top gaming and a number of linked encounters.

Campaign Rules
A player wins the game by having the largest number of counties. Each county generates a number of points, Manpower for the Crown Forces, Blood Resources for the Martian Forces.

Each territory when first captured by each side generates a set number of points between 2D100 these equate to points available within the Martian Empire rule book.

The game is played in turns, each turn represents 1 week commencing May 1898, each turn is divided into the following phases.

Initial Deployment
Prior to turn one, the Crown players places 10 Garrison forces of 500 points apiece, the Martian Player they randomly places 10 cylinders each with a value of 500 points.
Both sides do not have to support these units with resources in the first round. Martians may choose any force types, the Crown player may only select militia quality infantry.
Should the Martians land a cylinder in a county occupied by British forces they are immediately engaged by Crown Forces and are unable to place Fighting Machines.

Special Events
This phase represents the Social, Political & Economic Events over which the players have no control. Roll 1d6 and the result is the number of counties affected. If the county is unclaimed the result is ignored.

Revenue Phase
Total up the number of points generated each turn across the counties you control; these points represent your income for the week to be spent on new forces and new structures.On entry into an unoccupied territory 2d100 is rolled for the points available, these regional stats will remain in place for the duration of ownership by the current occupier, all points are re-rolled after loss and recaptured representing the new efforts to generate resources and the loss of existing structures.

During this phase, players may spend their points as set out in the list below.
In order to build specialist units Mankind or Martians must be able to trace a line of supply back to construction elements. Should the Crown Forces deploy entrenchments, these will be lost if units move on from that county.

Martian Blood Farm
A Human Blood Farm to be precise. It is believed that the Martian invaders are feeding off their Human Prey.
A Construction Centre is required before a Blood Farm can be constructed, the presence of a Blood Farm will double the output of any point resource in a county region. 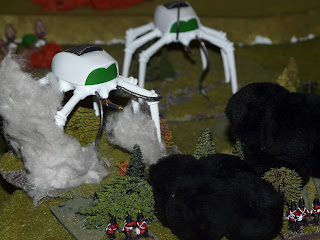 Red Weed
Red Weed will begin to form after one turn of Martian occupation, for the purpuses of gaming it will be treated as wooded areas.

Barracks
The construction of an infantry barracks allows the Crown player to generate Infantry units.

Training Centre
A training centre allows Crown forces to upgrade to Regular and Guard Units. To train up a unit it must remain stationary and unengaged for a whole turn to improve one quality level, i.e. Militia to Regular one turn, Militia to Guard two turns. 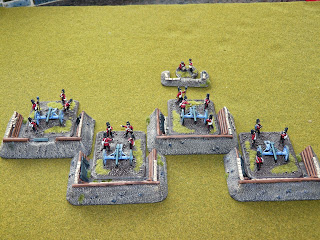 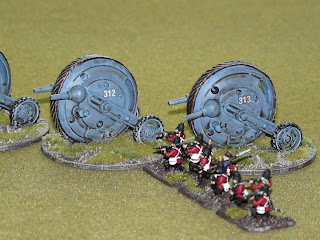 Laboratory
The construction of a government laboratory allows for the creation of marvellous devices to aid in the war with the Martian invader such as the Carey Suit, Automated HE layers or Entanglements.

Loss after the Combat Phase
Should the battle deem to be lost units must retreat to a friendly county, if unable to do so the unit is destroyed and any constructions lost.
Any damaged units which escape are repaired.