The Russian Army in the Russo - Japanese War had changed little over the last 100 hundred years, yes the weaponry was vastly different, but the command and control was still based on aged doctrine.

There was little bond between the 2nd rate conscript soldier often drafted from the rural population in the east of Russia, pay was low and conditions harsh.

The officers were drawn from an aristocratic background or the landed gentry and looked down on the troops under their command. The Officer Corp massively underestimated the Japanese army it was assumed that their lack of experience and their recent westernisation would make them no match for the Russian Army with it's tradition and experience.

Troop Quality.
Russian Infantry will generally be of Green quality, if the units are of Western in origin they may be Trained or Elite.
Artillery and HMG teams are likely to be trained. 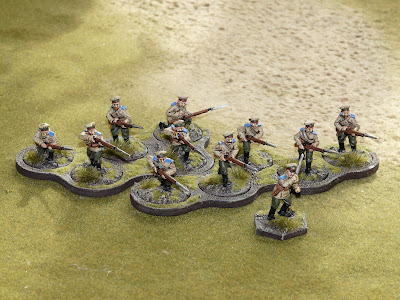 Russian morale is likely to be reasonable or Good.

Within Mud & Blood outside of the usual cards (sentry, Blinds, end of Turn (in our games SAKE) the following cards are assigned to the Russian Commander.
Big Man Cards one per Section.
I have added the Status of each Big Man, their influence range and their Experience and Morale, together with the weapons within the section to make referring to the rule book during play a little easier. 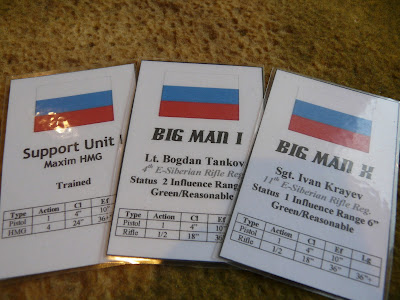 Support Unit Cards
These can be any type of support weapons that are allocated to the field force. This can range from pre-planned artillery support, SOS artillery support, Off Shore Naval fire, heavy machine guns, or a sniper. I have added the Weapon details to each card.

The Russian machine gun was deployed as a defensive weapon. It was fitted on a limber and had a gun shield to protect the crew.

To represent the shield if being fired on from their front, they will always count light cover.

To represent the more cumbersome nature of the Russian HMG, they will deploy on two actions before being able to fire.

The early adoption of the HMG means that they will unjam on a roll of a 6 rather than a 5 or 6 as stated in the original rules.

Command Initiative Cards
Given the quality of the average Russian Force during the RJW I have assigned the following ruling
For every Three Big Men add one Command Initiative card, the first being Status I, the second Status II and so on, up to the highest Status Big Man present. Once you get to that point begin again with Status I.


Rally Card
To represent the resilience of the average Russian Soldier who generally fought well each Russian field force will include a rally card in the deck. On it being dealt the relevant player may remove one point of Shock from a single unit.

Hesitant Troops
To represent the defensive strategy of the Russian High Command of awaiting the Japanese assault on their fixed positions before advancing when numbers were in their favour, This card should be included in the deck which once this card is dealt it is noted and if the next card is a Russian Big Man he may not use his initiative to move any Groups; they may only fire, spot or take cover.

Friction
The Russian high command were static and ineffectual to represent the poor command and control this card is added to any Russian Force. In effect this is a negative Command Initiative card. Once dealt it is left in play until the next Big Man of that force is dealt. He then has his Command Initiative reduced by one for that turn.

Heroic Leader
One Big Man may attempt something absurdly heroic, with his chances of success being agreed upon by the players or assessed by the umpire. Once this card has been used it will be removed from the deck.

National Characteristic Cards
These cards will be included in the deck to represent the strengths and weaknesses of a force. For every 2 units fielded one of the following cards can be selected to maximum of three cards in any game.

Vodka
A single group or Blind of the player's choice may advance towards the enemy with +2 pips per movement dice.

For the Motherland
Any Group or Formation within 8" of a standard may remove 1D6 Points of Shock. 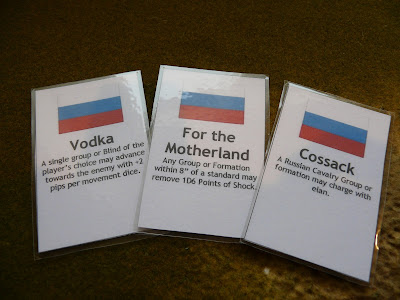