A couple of the African games of late have been getting rather larger, to large so that some of the finer details within the THW rules are being lost due to the multiple reaction tests needed to take, so I thought I would give Chris Peer's - "At close quarters" a try. I had heard some go things about how they handle larger games. 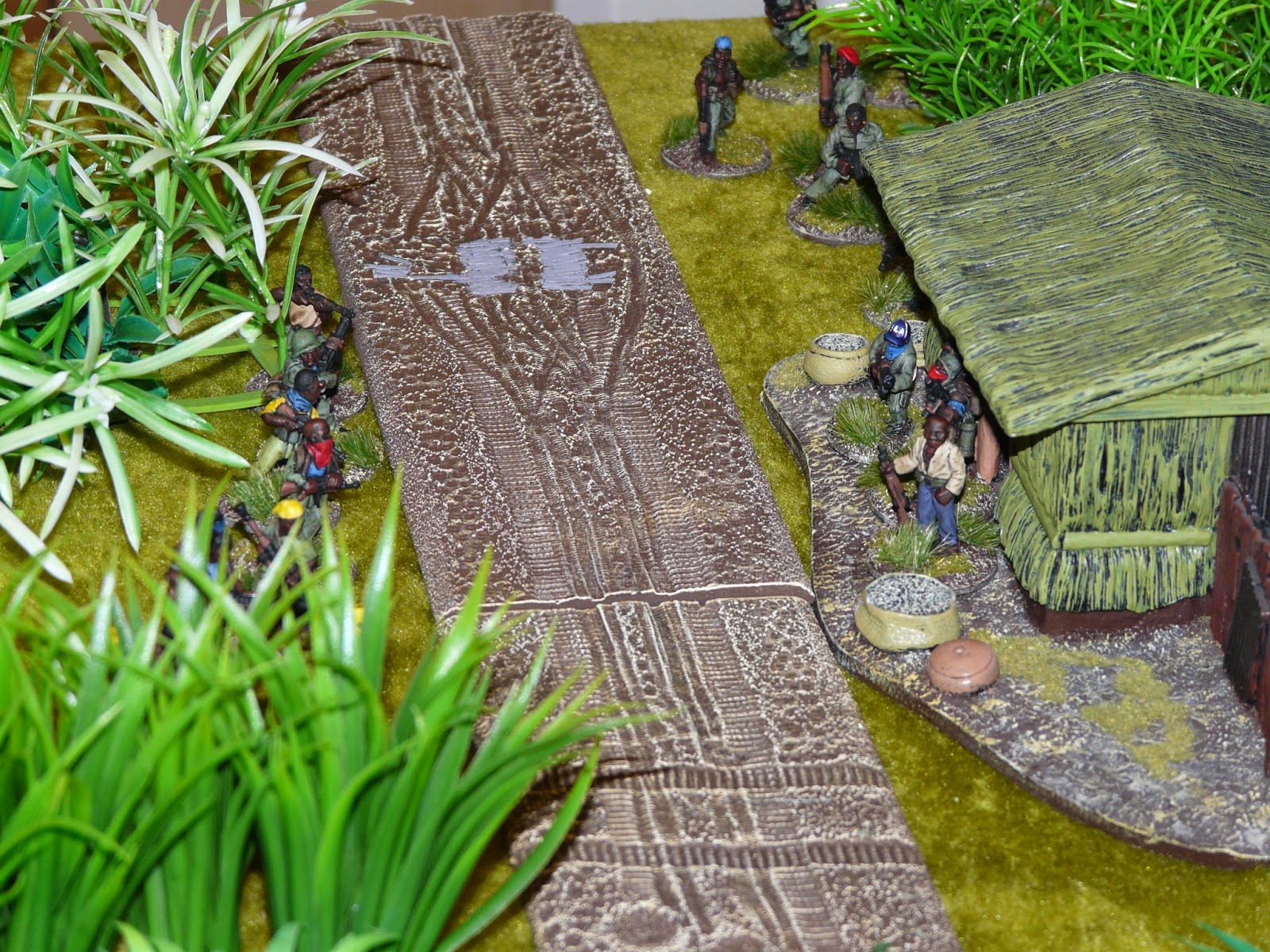 I knocked up a quick scenario deep in the jungles of Zikanga to see how the mechanics play out and would it give me the right feel for large skirmishes.
The Southside boys had been slowly gaining ground and had begun pushing North towards Milo a small village containing various NGO's and refugees, a detachment from the L'armee Zikangeleze had been sent to defend the high ground a few miles outside the village and stall the advancing militia, the bloodshed would be untold if they broke through with so many women and children in Milo.
Object defend the ridge line until the end of the evening. 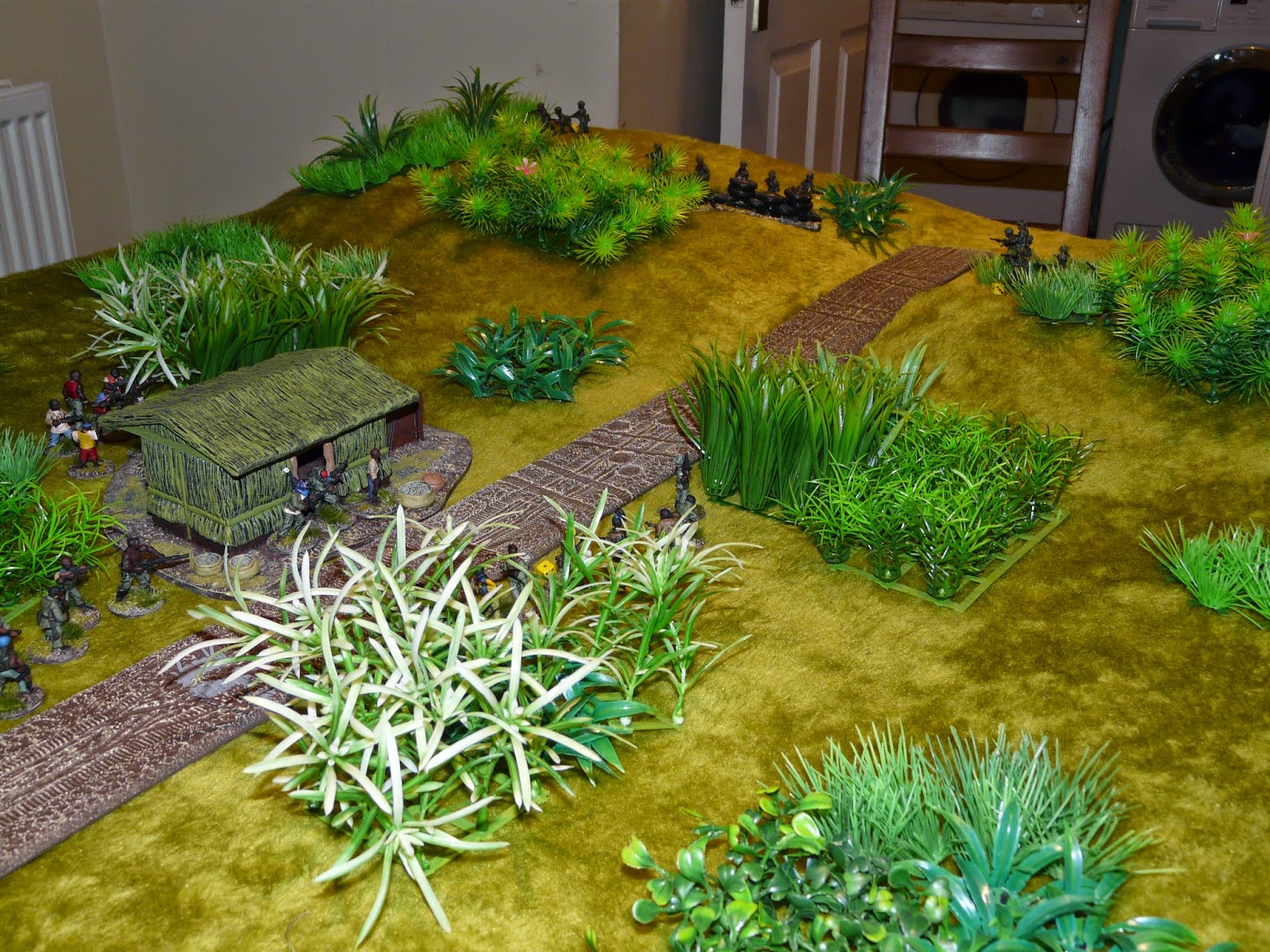 Let's see what two sections of regulars can do defending the high ground can do against 4 sections of militia advancing on their position.

The rules layout and design are a little dated than some of the more glossy rules available on the market today but at about a tenner you are paying for the rules and not a load of "filler" they really need a QRS to help them along.
Don't be put off by the finish they are advertised as "fast and enjoyable modern skirmish wargames" and they certainly hit the mark, within 2-3 turns we have the required to hit rules nailed and they easily handled the 60 militia vs 20 regular with very little reference to the rule book.

The rules are based on troops being classified into 6 classes.
Elite, Professional, Fanatic, Regular, Militia, Rabble Each troop classifiaction has a rough organisation structure with the better quality units having less troops within each unit. e.g. Elite might be 4 SAS troopers, whilst a militia unit might be 25 figures.

Movement
Players take it in turns moving one unit at a time, then shooting is resolved for all.

Firing
The better quality units always shoot first, which gives them a distinct advantage when it comes to flying lead and getting the drop on poorer quality opposition.

Firing is then either aimed or unaimed. Only aimed fire can inflict casualties, you have to spot your target first before you can commence aimed fire but unaimed fire will supress an enemy forcing it to pass several dice before it can move forwards or fire.

Most weapons fire in two different modes Single shot or Auto this dectates the range and number of dice rolled. Firing is carried out using a D20 dice with modifers for your class, militia for example suffer a minus penalty.
A modified score of 18+ means the target is killed. A roll of 15-17 means the target is pinned.

If you are firing unaimed then your best result is to surpress the enemy with so many pinned markers they become combat ineffective, due to how long it would take to return to combat ready.

Morale
Everytime your unit suffers a kill you have to pass a morale test, 2 fails and your whole unit is pinned, causing you to seek deeper cover whilst you try to recover each fighter. 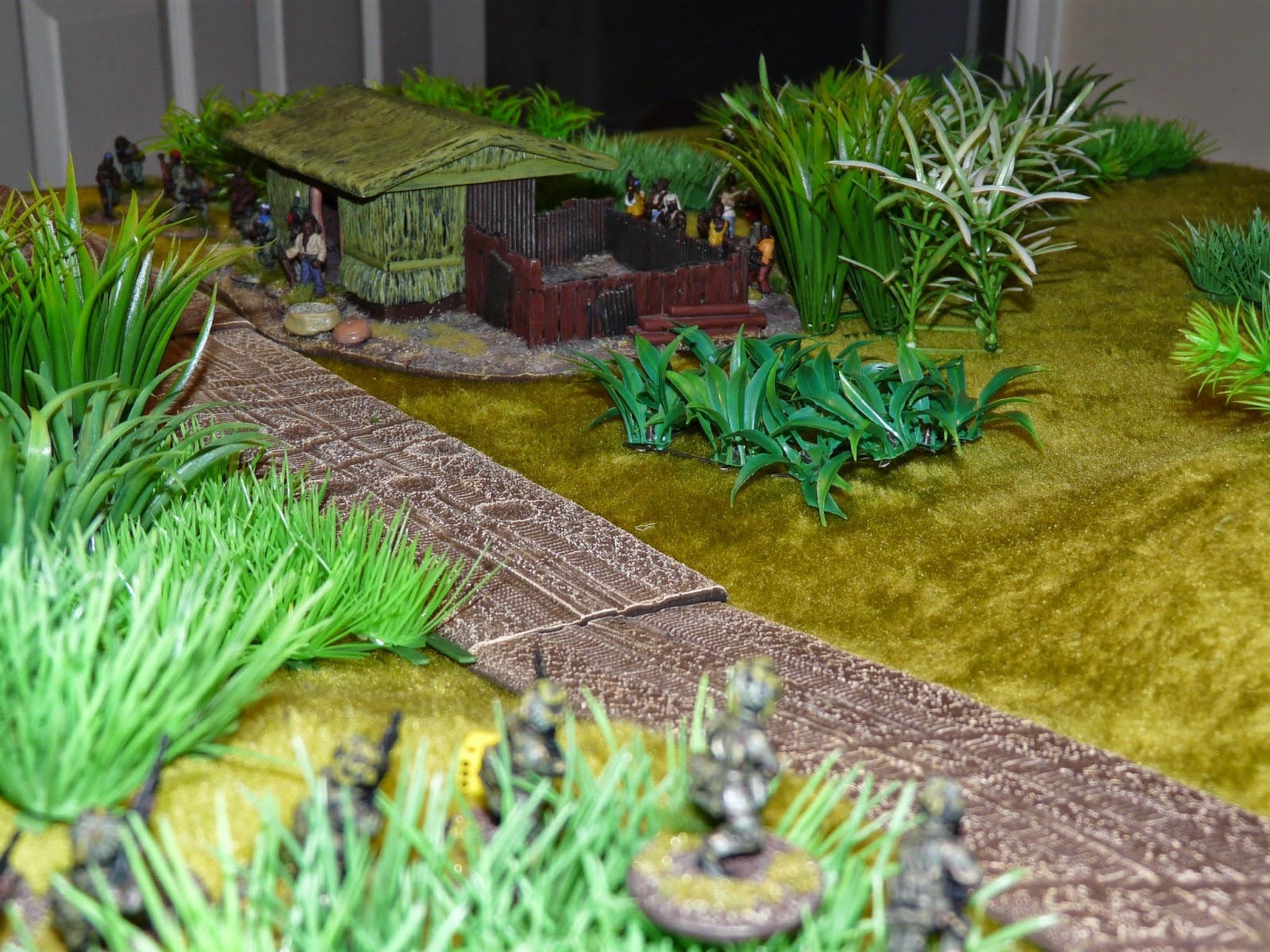 In our short encounter the 2 platoons of regulars where easily able to pin a large number of the militia before they could fire back, the poor training of the milita meant that much of their fire was unaimed and the regulars training allowed them to recover far quicker than the militia when they themselves were pinned.

The ability to successfully aim meant that the regulars were killing militiamen and causing morale checks which were pinning whole units who ventured out into the open.

At the end of the evening, the militia pulled back having lost 13 of the 60 attackers and had a further 25 pinned, the regulars had suffered no casualties.....

Overall it felt like the right result for this type of scenario, regulars defending emplacments vs aggressive yet pourly trained militia men, It's a real worry when the bigger weopons came into play, the RPG's attracted a lot of fire when ever they popped up into the firing line, which feels right from a gaming perspective, even unaimed they can keep peoples heads down, more so than simple small arms fire.

Definately a set of rules worthy of another outing, quick fast paced and easy to remember.
Posted by Stuart S at 11:00