I finished these a couple of weeks back and hoped to have them available for the Plantation game, but felt the Cuban dog handlers would have been better suited for defending the grounds. 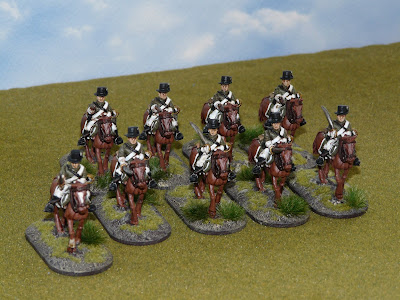 During the early years of the revolution, dragoons were sent to Saint-Domingue from France, as well as being recruited locally. The colonial dragoons wore all green jackets with green dragoon housing and make a useful addition to the French forces for Haiti.

In 1799, during the early years of the revolution, also known as the War of the Knives (Haitian Loyalists Toussaint vs Rigaud), Toussaint was known to have fielded cavalry who were a mix of French and newly-freed Africans slaves, so some further head swaps will be needed in the future good job the Trent Miniatures come with separate heads. 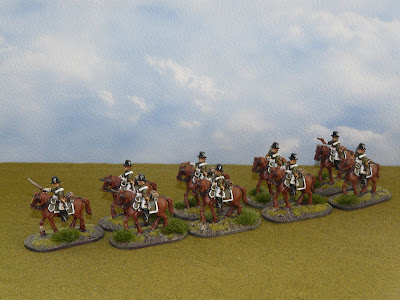 An English observer noted that Toussaints cavalry lacked carbines and were armed with pistols and sabres only, and dressed in blue coats, cocked hats and half boots, with a minority uniformed as hussars so plenty of scope to adapt further figures from their range.

Plans for the campaign is coming along nicely and I should have the Orbats complete for each faction over the weekend, I am hoping to have around 6-8 potential factions all looking to capture and control St Domingue and its valuable plantations.
Posted by Stuart S at 02:42