After the first play test of solo rules a few weeks ago time to give the campaign it's first proper test and Huharmati's advance south.

Having secured the high ground Huharmati looked out across the plains towards the small town of Al Shebbeh a wadi screened the town with a crossing marking the main route into town, this would need to be seized if Al Shebbeh and it's riches would fall to the Hittites.

Will the Gods be with Hurarmati. 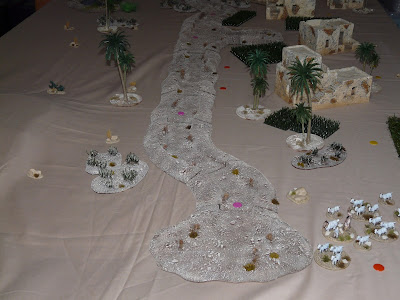 The coloured spots represent the potential Egyptian opponents, A B or C each class containing a differing spread of troops, I deployed these blinds based at likely points of defence, but with no idea what would appear on the table. 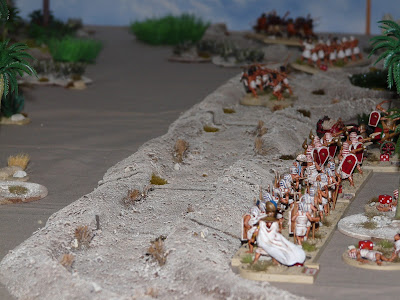 The dice gods were against Hurarmati and each roll on the blinds revealed a unit of Egyptians lining the wadi, Al Shebbeh would be a tough nut to crack. In the centre a group of close attack troops and a unit of spearmen. 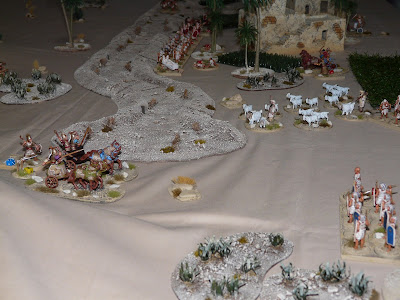 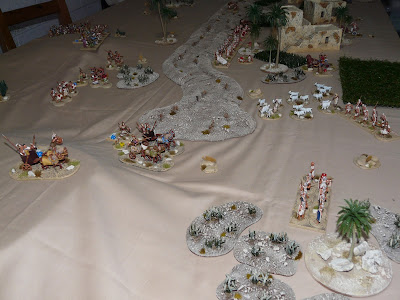 I sent the Hittite heavy chariots on the left flank skirting the wadi to bypass the bulk of the defenders. Here the defenders were a little thinner with two of the blinds blank and the others only groups of infantry. 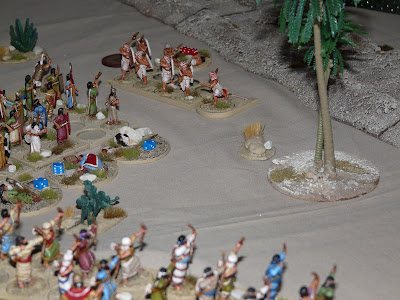 In the centre the advance of the Hittite Spearmen drew the Egyptian close attack troops from the wadi as they rushed towards the block of spearmen (12 on 2D6), the Hittite archers loosed their arrows as the attackers entered the open ground. 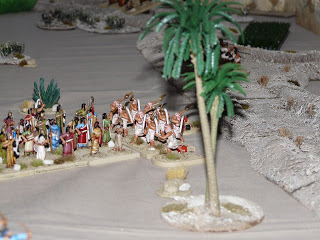 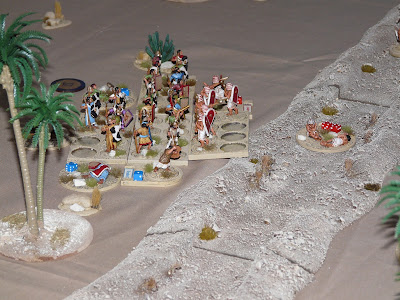 The Egyptians closed but the weight of Hittite spearmen and their supports drove them backwards back across the wadi. 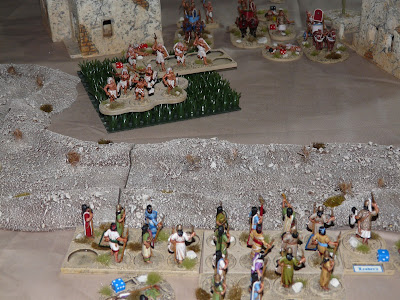 With the close attack troops shattered the Hittite infantry were able to seize northern side of the wadi pinning the defenders in the village. 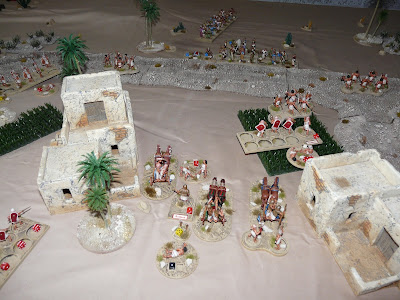 The Egyptian chariots were pinned in the centre of the village unwilling to advance across the rough terrain to close with the ranks of shield bearing spearmen. 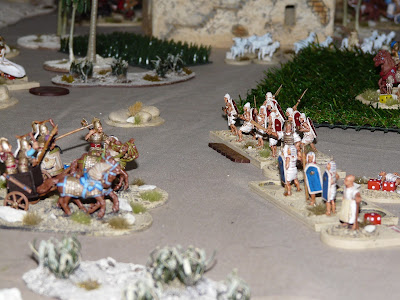 Meanwhile on the right flank the Heavy Hittite chariots crashed headlong into the defenders, heavy spears disrupting the ranks before they could get organsised. 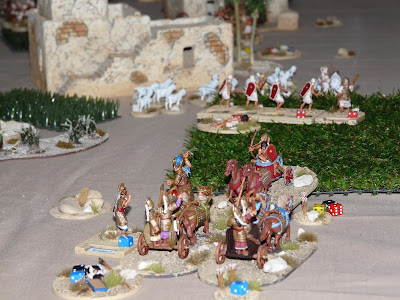 The flank was being turned and lighter armoured Egyptian chariot no match for the heavier Hittite war wagon. After one round of combat the Egyptians are forced to flee. 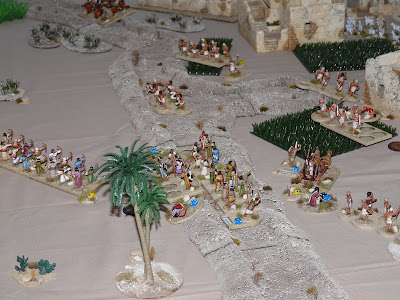 The Egyptian morale is starting to crumble, pinned in the village and under pressure on the outskirts of town their force morale drops to zero ending the game.
Nice to get all the toys on the table at least, the AI mechanism works reasonably well, although a couple of tweaks are needed on these with excess shock and perhaps some variance for those Bigman 3 leaders perhaps they could advance or lower their dice roll by one level above their status, e.g. Big man L2 can adapt the change by +/- 1.
Great to get Two Sheds Fred wadi and scrubland on the table, a great addition to the desert terrain and only with multiple users over a number of periods so glad I made the investment.
You can see more of Fred's terrain here...
What next for Huharmati?
Let's see what the fate dice hold.....
Posted by Stuart S at 14:11