Yes more Rats and the last of the painting projects for Elizabethan/Fantasy May.
I picked these up from Midlam Miniatures a few weeks ago when looking for a few more folklore oddities to flesh out the forces of darkness.
Mounting 2 giant rats to a base and one gigantic rat all on his own.... I see then as one unit within Warlords of Erehwon rules.
Great castings with plenty of character if a rat can have character :-) 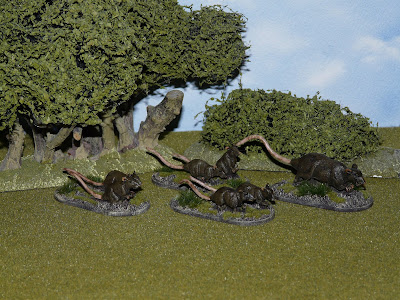 I opted for a dark brown rather than a black colouring having looked at the colours of some of the earlier hordes in particular the D&D plastics, the brown felt like it would give an overall better feel to them. 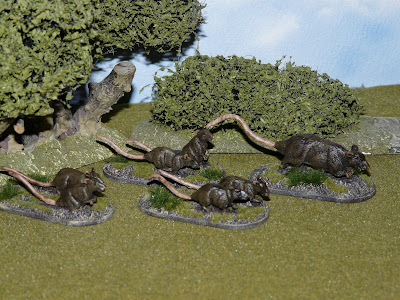 They make quite a collection now with rats of all sizes filling the table, from small swarms which have been repainted from black to brown to the larger swarms and the half man/half rat king.
I need to tweak a couple of the rules yet but something a little more unusual for the English and Spanish to face rather than the shambling dead. 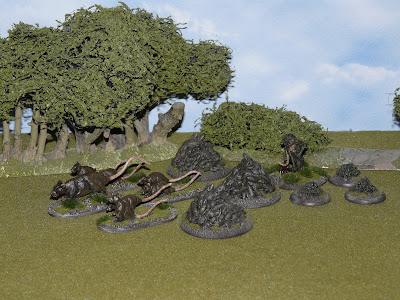 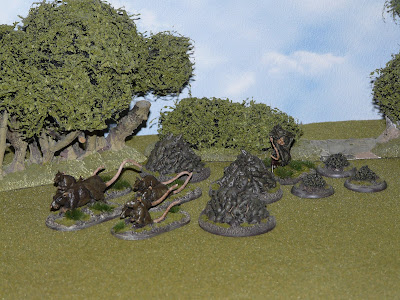 That's the last of the fantasy/folklore foes complete...
Witches, Zombies, Wolves, Crows, Ghosts, Evil Villagers, a Vampire and various Rats not a bad haul.
If anyone has any other suggestions what might fit feel free to comment.
I am trying to keep away from the usual skeletons and high Fantasy if there is such a thing.
Next up a new month and time to switch projects :-)