Wargaming the Battle of Powder River 1876.

After several weeks of painting, the troops to finally hit the table in their first proper outing and perhaps my first actual refight in over 30 years of gaming.... With the Battle of Powder River March 17th 1876 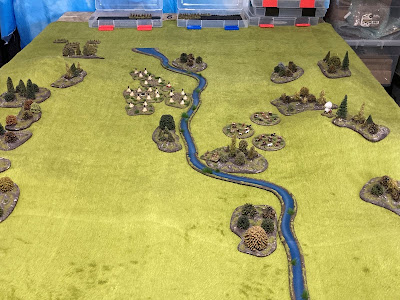 Having picked up two excellent books. Paul Hedren's Great Sioux War Orders of Battle and Jerome Greene's Battles and Skirmishes of the Great Sioux War, I had the idea to refight each of the 28 most significant encounters of the Great Sioux War.
The first engagement was the Battle of Powder River or the Reynolds Fight when Colonel Reynolds attacked the camp of Old Bear, destroying the camp, but the attack was poorly executed and Colonel Reynolds was later court marshalled for dereliction of duty.
You can read more about it here. 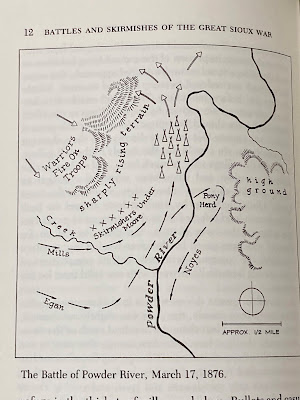 Greene's book has a great map of the battle and direction of attack, our table starts just across the first creek and the north approach to the village. 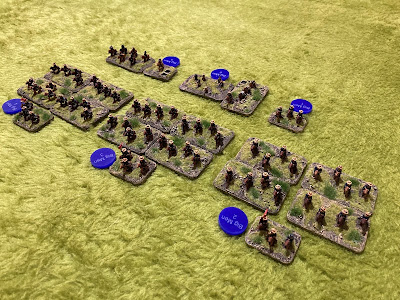 Meanwhile Hedren's book details the officers and make up of each of the attacking forces, the level of detail is perfect for Sharp Practice. I kept the status levels low to represent the quality of officers with only Reynolds and the Leader of the Scouts greater than level 1.
The US Player had the option to take additional support options in terms of additional scouts and mule trains, however this would increase the Indian defenders. The US player was unaware of the number of Indian defenders (60% vs the US 100%)
Colonel Joseph J Reynolds - Third Cavalry Commanding. (Big Man 1-II)
Asst Surgeon - Capt Curtis E Munn.
First Battalion
Capt Anson Mills Commanding Battalion (Big Man 2-I )
Co M Third Cavalry
Co E Third Cavalry
Second Battalion
Capt Henry E Noyes Commanding Battalion (Big Man 3-I)
Co I Second Cavalry
Co K Second Cavalry
Fifth Battalion
Capt Alexander Moore Commanding Battalion (Big Man 4-I)
Co F Third Cavalry
Co E Third Cavalry
Maj Thaddeus H Stanton Chief of Scouts (Big Man 5-II)
Mule Train (Big Man 6-I)
Can the new Col Reynold's succeed were the original Colonel failed?
To try and represent the friction in the field we introduced written orders for each battalion commander, orders that could only be changed by Reynolds sending out a rider, although each command could make tactical decisions based on their own circumstances. 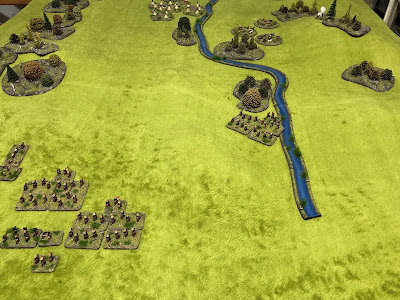 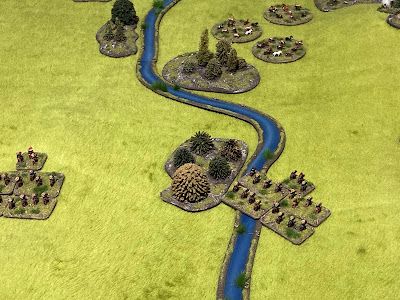 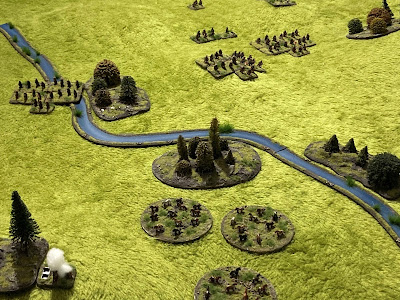 Moore's Fifth Battalion following history was sent across the shallow's of the Powder River to round up the Indian's pony herds. They crossed the river with no sign of any hostile activity. 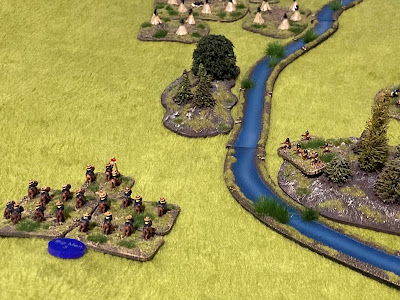 The Cavalry closed on the village with Mill's first Battalion skirting the river, when Indian pickets opened fire from the tree line. The Indian fire was largely ineffective but it was a distraction to the approaching cavalry. The Indian Big Man (I) - Little Wolf urged his young braves in defence of the village and pony herds. 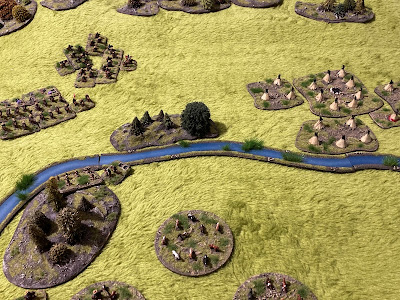 Mill's turned his Battalion to face the hostiles, the Indian fire rifle and musket fire continued to snipe at the men in blue, a trooper fell from his saddle, out of the fight. With Mill's battalion drawn into a firefight, the attack on the village was left to the Noyes.
To keep the Indian player focused on defending the village, every lost section of the village would cost the Indians a roll on the force morale table with a roll for loss of face, should a section be burnt to the ground then a roll for loss of a support unit should be rolled. 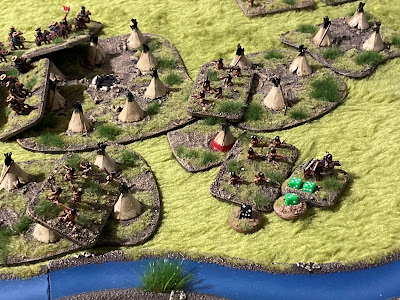 Irregular Skirmishers were no match for mounted dragoons - He Dog was beaten back. The Indian force morale slipped backwards as section after section of the village fell to the cavalry. 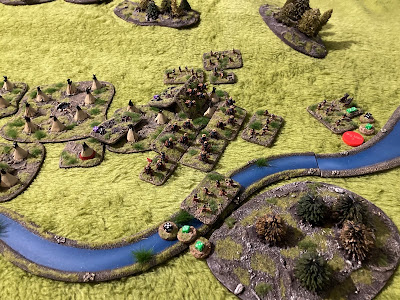 The cavalry swept through the village, Old Bear the head man headed for the bluff and the tree line, while other Cheyenne fled across the river to the safety of the woods. 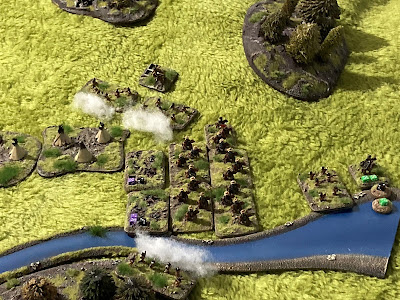 Noyes's Battalion exited the village but found themselves under increasing pressure from the quickly regrouping hostiles. With fire pouring in from both flanks Capt Noyes struggled to reduce the shock steadily rising in his unit as horses and men were slowly worn down despite having whipped any Indians who had tried to stand their ground. 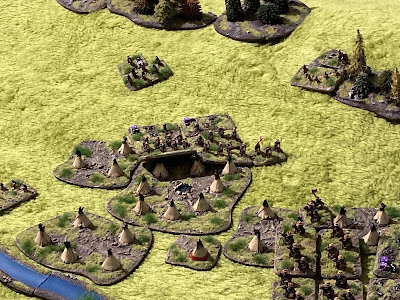 Mill's 1st Battalion had finally extracted themselves from the gunfight with Little Wolf's pickets and rode into the village to support the 2nd Battalion. Indian fire was increasing from the high ground and the arrival of Wooden Leg another senior leader in the Indian camp.
Both battalions now had a number of casualties to tend to. There was little time to collect or destroy the Indian provisions from the lodges. The cavalry turned about and headed south. 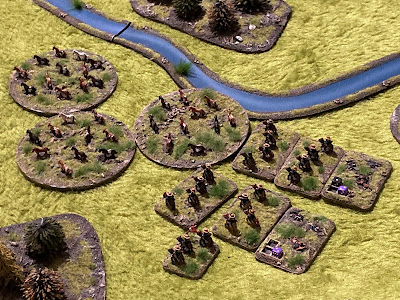 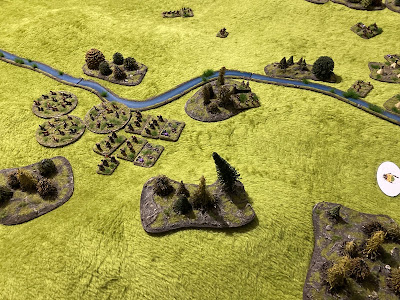 Meanwhile Moore's 5th Battalion had rounded up the Pony herds and were also heading south away from the village. A dust cloud was seen approaching from the North, Moore did not stop to see what or who it was. 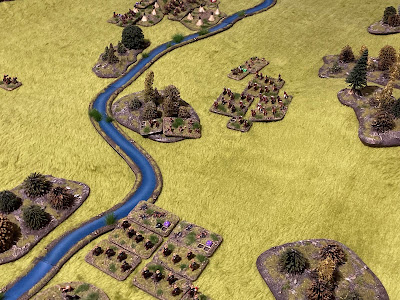 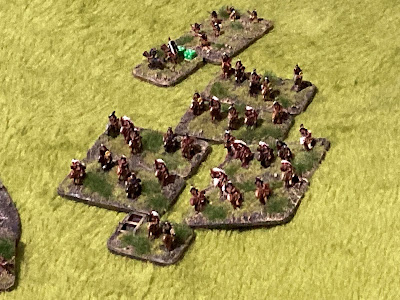 The approaching dust cloud was Two Moons (Big Man II) racing to recapture their ponies critical if they were to survive the winter. 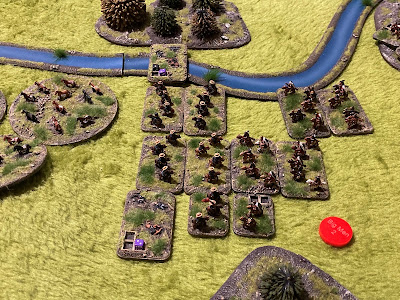 The ponies were difficult to control, Moore considered dismounting but opted to run the horses, Two Moons was fast and with the benefit of 4 flags enabled him to get the drop on E Co. who lost several men as they where caught in the rear and driven backwards. Captain Moore took a bullet to the head which knocked him back in the saddle. (lowering his status by a single level.) 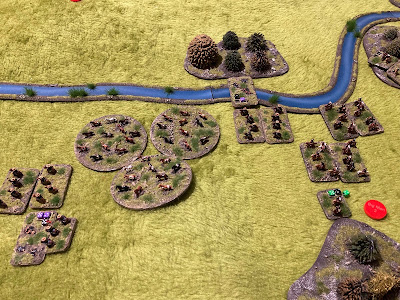 The sacrifice of E Co was enough to buy time for the injured Moore to drive the Indian herds off the table. Two Moon's warriors were spent and he was nursing a serious wound which also reduced him to a Status I.
What a game.....
In a mirror of history - Reynolds claimed victory having run off the herds and having cleared the village and broken several groups of Indians, however the lodges were intact and the Indian supplies still available to the Cheyenne. Several cavalrymen had been killed or wounded in the attack and had retired from the village.
In the minds of the Indian this was a victory for them.
Casualties after roles for recovery.
1st Battalion Capt Mills
Co M Third Cavalry - 2 Men KIA
2nd Battalion Capt Noyes
Co I Second Cavalry 1 Man KIA/ 2 Men WIA
Co K Second Cavalry
5th Battalion Capt Alexander Moore Wounded.
Co E Third Cavalry 2 Men WIA
Lot's to ponder for future encounters with the Sioux and Northern Cheyenne.
Dismounting would have increased the fire power of the Cavalry, but not knowing the strength of the defenders restricted their ability to keep mobile and escape any Indians encircling them. The attack on the village felt really good and the skirmishing Indians were unable to hold back the galloping cavalry or react to the attackers until their pickets had raised the alarm.
The charging cavalry found manoeuvring difficult when hemmed in by the river and high ground which allowed the braves the change to flank them.
Reynolds one of only two Big Men II on the table stayed away from the fight with the ammo train, which restricted Mills and Noyes ability to reduce shock, which in turn restricted their fire power when faced with the reinforced Indian defenders, which turned the game into a more defensive game for the cavalry, although by staying in the saddle did save them from having to roll for low Ammo.
The capture of the pony herds further drove down the Indian force morale, although perhaps dismounting one of the companies would have allowed the US player to have engaged Two Moon at long range rather than being caught trying to drive the herd off table in a race for the finish.
A great opening game which really captured the feel for the period and casualties were very similar in which on the day saw 4 men killed and 6 wounded.
If anyone is interested I have posted by house rules and Orbits here.
Posted by Stuart S at 18:09