Infamy Infamy - Sauron's got it in for me.

What to do..….
Locked in for another week, a new set of rules to try and no figures to play with... The answer adapt the rules to figures you do have.... I blame the first get together over a beer and curry in 3 months, as respective wives caught up, we might have got a little carried away with how the rules could cover a multitude of periods.

Yes with the latest rules from the Too Fat Lardies - Infamy Infamy in my hands for barely a week, plans are already afoot to apply them to Lord of Rings, nothing says Barbarian like Urak Hai and the men of Minas Tirith taking the role of Romans.

Over the next week we work through the finer details, Characters from the movie could be Big Men but many should be units in their own right classed as Elite Warriors with 8 life points and they themselves a Supra Numerum Leader.

Gandalf and Sauron would be skirmishers armoured with spells (slings) and Cave Trolls as Fanatics with life points to give them some depth on the table.

Time to give it a run out.

We picked the forage mission with men from Rohan and Gondor entering Orc territory looking for supplies when the forces of Sauron spring their trap. 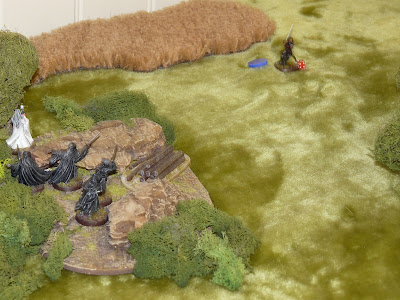 The Riders of Rohan had managed to remove one Ambush point and turn another to a deployment point, but they still had their work cut out, if they were to march across the table and gather supplies, members of the fellowship come forward to scout the table, in the shape of Aragon himself he is immediately set upon by Sauron and Ring Wraiths. 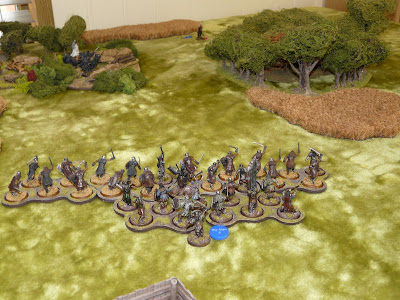 A string of evil chips pulled from the bag led to larger numbers of Urak Hai flooding  the table before a single unit of men arrived. 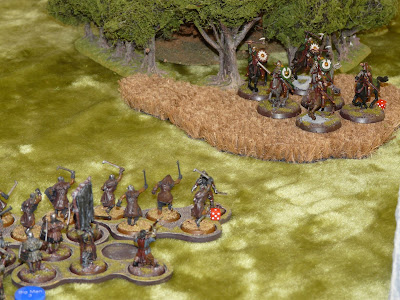 To counter the Orcish mass the Rohan cavalry deploy from their own deployment point in the woods throwing their spears at the massed ranks of Orc's hoping to draw them away from the pitiful few raiders who have so far deployed on the table. 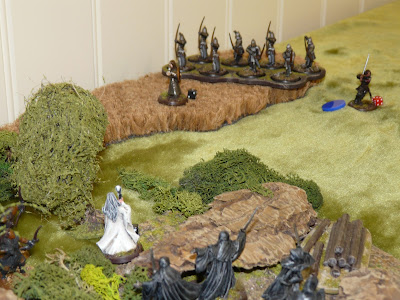 Boromir and Archers arrive to block the path of the advancing Ring Wraiths. 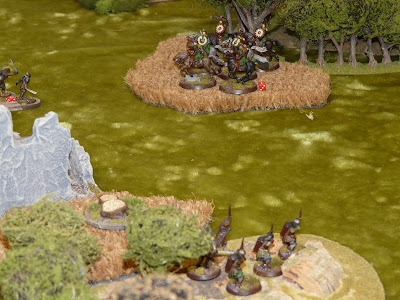 From a further ambush point orc archers darken the skies catch the cavalry in the flank. 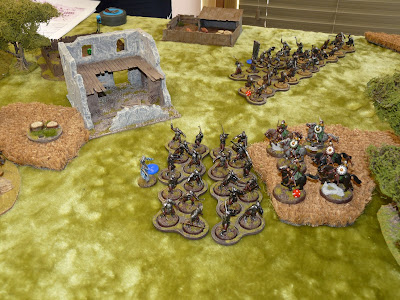 With flags in hand the Orc's rise up out of the hinterland and ambush the riders, the Orc's full of fervour rush forwards and playing an infamy card to tip the balance to 4:1 odds, the riders are wiped out without a dice being rolled. That's not how the movie went..... 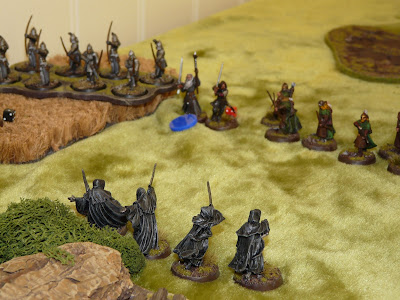 As the Ring Wraiths advance they are countered by more members of the fellowship with Aragon and Gandalf taking the fight to the evil forces. 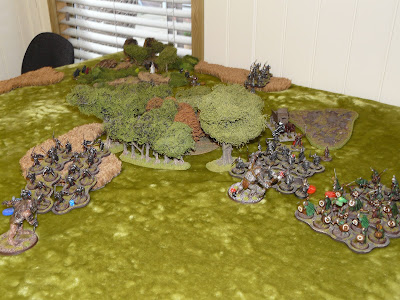 Finally the main human forces arrive and with the right flank blocked advance to the left hoping to sweep around the wood. 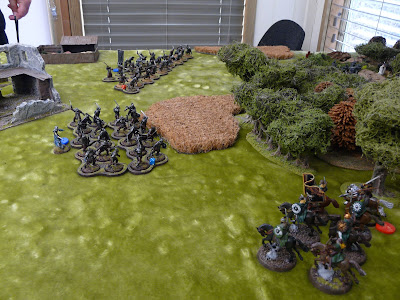 Backed by more riders of Rohan to counter the massing Orc forces the odds are in favour of the army of men. 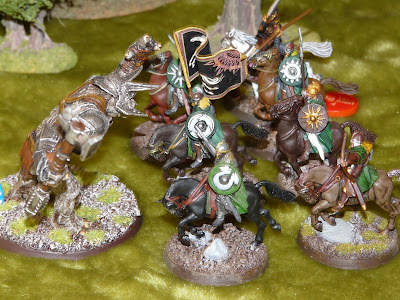 Te Orc's trigger a further ambush as a cave troll rises from the ranks and charges into the cavalry, the battle is short and sharp and the cavalry flee from the raging troll. Infamy Infamy is no Sharp Practice Ancients. 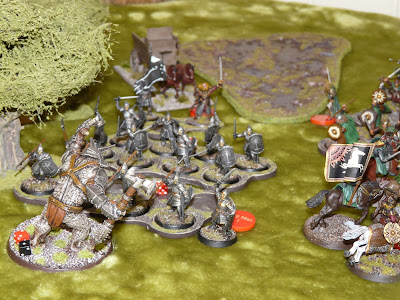 The Troll advanced his Fervour gone but as a fanatic he ignored wounds and shock and continues his
deadly work crashing into the men of Gondor, the heavy infantry with no tokens to play are caught in open order. 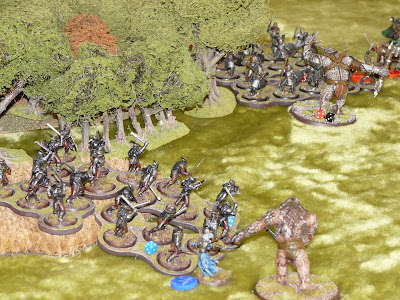 Whilst the troll delays the advancing human columns the Orc's reorganise and line up for the impending clash. Another flaming troll wanders into shot. 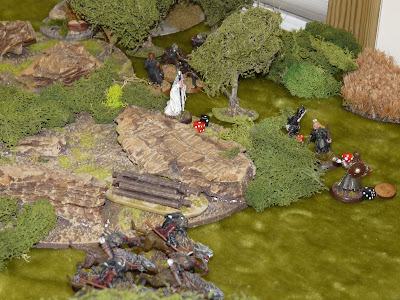 On the other side of the wood as arrows and spells fly, Legolas charges into Lutz who has made an appearance to bolster Sauron and Ring Wraiths who had been driven back only to be replaced by Warg riders who rush forwards to harass the Rohan archers. 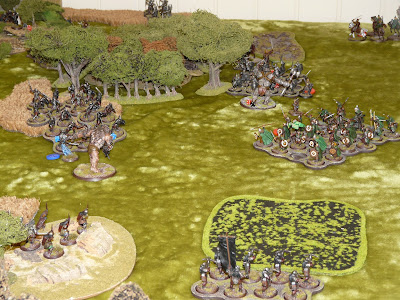 Spearmen of Rohan march in column looking to support the men of Minas Tirith are countered
by another ambush as Orcish cross bows slow their advance. 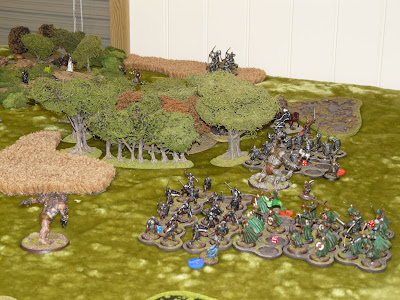 The Inferior Warriors are met by the heavy infantry of Sauron,  again without tokens to play the men of Rohan have to defend in open order as their leader is to busy slowing down the shock the Urah - Hai are forcing on the men. 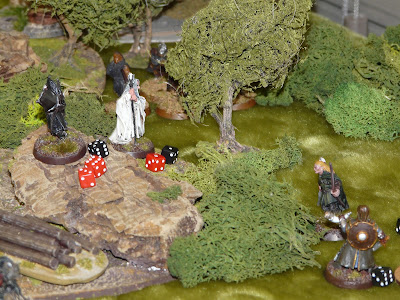 Lurtz is beaten back but this side show is perhaps the only bright moment for the forces of good who are slowly losing the battle.

With perhaps a little too much on the table, we ran out of time but what a great game, the rules were fun and despite not quite what the Rich and the team had planned were perfect for getting some great looking toys on the table.

The heroes as elite warriors with life points instead of bodies worked well and were not over powering and the fanatics were great fun. Infamy Infamy whilst taking elements from Sharp Practice 2 and Chain of Command is a very different rule set.
The Infamy cards if played correctly can make a difference as my riders found out...

We no doubt made a few mistakes and most definitely burnt through our tokens far to quick and should have kept a number of them back for the crucial melee's.
Looking forward to the next out whilst I start the planning for my Egyptian Project - Kings of Bronze.
Posted by Stuart S at 18:12