Low Ammo and Supplies Rules for Through Mud and the Blood rules.

Now it has to be said I am a fan for Rich Clarke's  Too Fat lardies rules, I love the idea of units being inspired by leaders and larger than life characters and it fits with my with my typical gaming style of large scale skirmish.

Over the last 12 months I have been building up forces for the Russo Japanese War and have been using Through Mud & Blood Rich's WW1 Skirmish rules, however the period generates some interesting challenges which feel more at home in earlier periods than the some to be seen horrors of the trenches but 10 years later, one of these was the issue around supply and ammunition it got me thinking about how to apply these in the Rules. 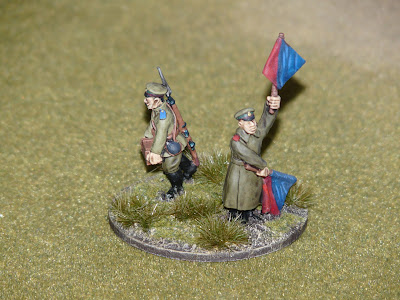 Several hours spent on the web brought up some interesting discussions points.
Sir Richard Henagan a commander at Waterloo stated the problem at La Haye Sainte was because the rifle armed units (95th Rifles) used more ammunition than anticipated, so when Baring called for more there was no more to give him.

At Isandlwana during the Zulu Wars the supply issues with the supply wagons being to far back from the firing lines led to the British defeat. We could spend hours debating whether screws in the lids hampered this further.

"Bullets run out but those bloody spears don't"


Clearly as war became more sophisticated so to did supply and rear area support, reading extracts from commanders within the ACW they were often forced to withdraw troops from the line in order to resupply.

How many rounds would your average infantryman carry into battle 40 - 60?

So how to apply this to the table top?

I liked the idea of random events with the Shape Practice when more 1's than 6's are rolled, but found the need to reference the separate chart a little cumbersome and honestly forgot more times than remembered to even use it, it's not a rule that carried forward into M&B but was worthy of reintroduction for the RJW. (besides I got to use the character figures often found in blister packs these days.)

So I have incorporated the following in house rule.

In the same way a Big Man in M&B can add +1 pip to any single dice for each status level above 1, a defender can now spend the firers LA counters to lower the attack dice reducing any dice by -1 pip for each LA counter spent.

"The Russians roll three 6's and five 1's resulting in 3 Japanese being killed but receive 2 LA markers after that round of combat."

I made an assumption that in the heat of melee troops are less likely to worry about ammunition conservation when they are fighting for their lives. 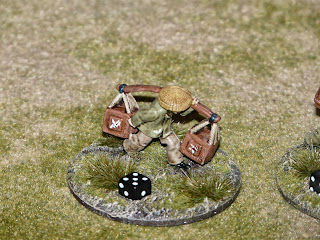 "A Chinese coolie bring supplies up to the front"

Supply Units.
I have added in an additional unit type to the Support section, the supply unit may be anything from Chinese coolies, pack mules or horse draw wagons, any activated supply unit with 12" of an Infantry group may deduct 1 LA marker per 2 actions.

Supply units are assumed to have 5 men in a group and may be targeted like any regular infantry unit.
Opposing forces may not use each other supply units and once captured can not be recaptured.

I add a supply support unit for every 4 infantry/cavalry groups deployed on table. 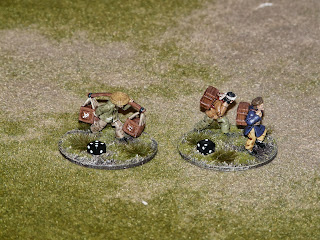 The above rules seem to play to the spirit of the TFL rules and keep book keeping to a minimum, allowing players to trade points limiting hits if you are not properly suppled.
The introduction of supply units make for an interesting mini game as players look to sneak supplies through to the hard pressed front, bold cavalry tactics are rewarded by making units unsupplied for whole games as pack mules are chased off.


Besides how else do I get to put these figures on the table.