Escape to the Country - Part 2

Having your own gaming space does have it's advantages, it means you can keep the table set up to continue where you left off. So part 2 of our walk in the Worcester countryside.
I am sure those sneaking dead fella's had crept forward since last week....

As we saw in part one as the dead increased their grip on the urban areas, the living were forced into the countryside for supplies and protection from the risen. But nothing brings the dead shambling your way than loud noises. So you can imagine what the blast of a shotgun will do. 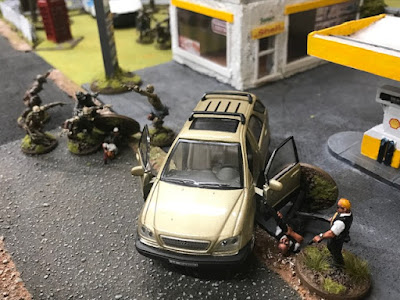 Things start badly for the cops, stuck in a fight to the death the Sarge yells for help and is joined by his unit including little Timmy who clearly got carried away swinging his crowbar into the cadavers unfortunately he is brought down by the rotting mass.
The Sarge gets away dragging an unconscious comrade as the dead munch down on poor Timmy.... Welcome to turn one. Gulp.... 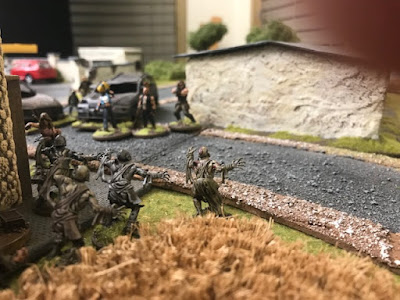 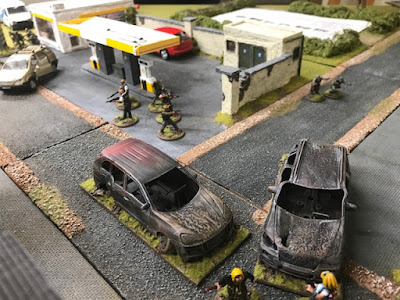 Whilst Timmy is being served up as a starter, the Mercia Boys fall back grabbing their breath for a few moments, when up pops a silly little girl was a pea shooter who lets off a round at the police.
No respect some people. 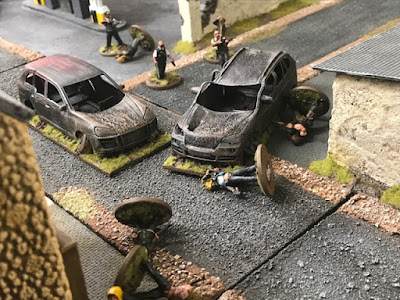 A volley of shotgun blasts sends the bikers for cover ducking behind the burnt out wreaks. But not before the detective catches one square in the chest and as he lies on the floor another round strikes him through the skull....
We went all last week with no casualties then two in less than an 20 minutes. 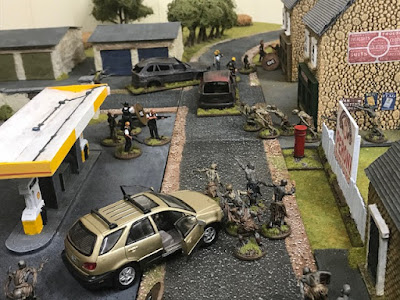 Now at this point we should have perhaps took stock and turned on the dead but no, we had to get into a gun fight and as both sides blazed away the dead increased in number appearing from doorways and alleys. 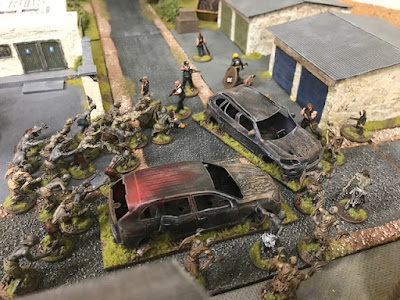 The tide of death reached us both. The boys in blue stood in the street as the walkers clawed at their body armour. Whilst the Bikers tried to slip past the garages to head back to their car but were chased by yet more walkers. 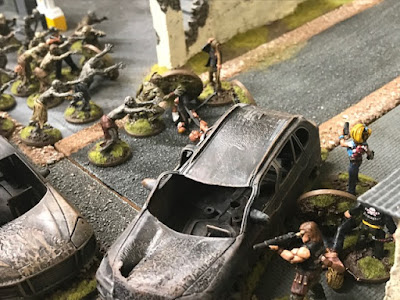 Now we may be knee deep in the dead, but we both still found time to fire off a shot or two at the only living on the board. It seems that old habits are hard to shake off. The Sarge takes a blast to his flak jacket which knocks him to the floor, he lashes out kicking the dead away. 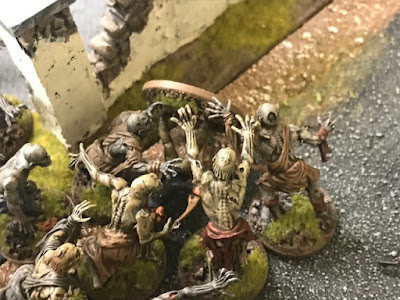 Bow girl finally runs out of arrows and becomes the main course. The dead rip at her flesh and she is consumed by the risen. 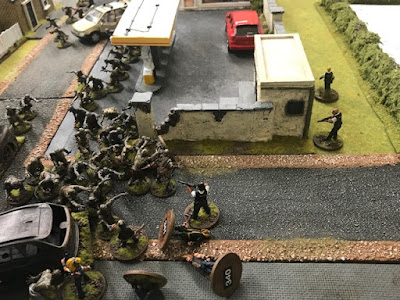 Whilst the dead feast, the police make a break for it and what better way to distract the dead than with a few fresh meals, blasting away at the fleeing bikers who are knocked to the ground by the close range shot. 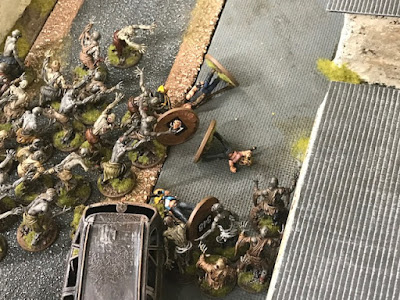 Unable to recover from their wounded and shaken status they are caught by the walkers who tear into them. Brainzzzzz….. 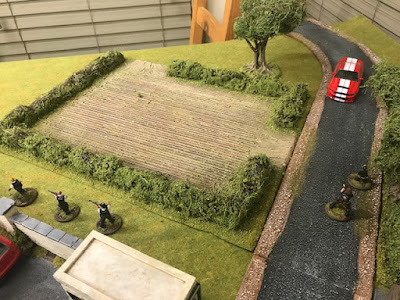 Both sides decide that enough is enough and headed back to their vehicles far fewer in number than at the start of the day. Low on ammo and a little battered. but on a brighter note the supplies that they had picked up would last that little bit longer with fewer mouths to feed.

A cracking game
With us all itching for more.
Posted by Stuart S at 07:46