GAME REPORT 3
Sunday night club night and another outing for Lt Henshaw our standin hero.
Using the Too Fat Lardies, Sharp Practice rules with a few tweaks for the Zulu Wars, campaign games are generated using the Platoon Forward suppliment again tweaked to give a more colonial feel.
After the last encounter at Hamel's Hill the British player rolled well and was fully reinforced back to Platoon Strength, he also picked up reinforcements for the next game and was aided by a Section of RA to support the platoon.
The next scenarion rolled for was "Ambush" a chance for the British player to intercept a Zulu War Party and inflict more damage than he recieved before retiring....
Easy......
The British Player chose to deploy a full platoon plus the support.
The Zulu player had 7 blinds available with a further 8 on the 5th turn of active engagement.
We pick up on Sunday evening in the British Camp.
Chances like these are few and far between. A Swazi Chief came in to camp on Sunday evening with details of a planned Zulu raid across the Natal border. Henshaw and his platoon are sent out to ambush the Zulu party attached to his platoon is a section of artillery to add much need fire power to the British forces.
The terrain was in the favour of the Crown player with a wooded ridge line running across the centre of the table and several hundred yards of open veldt in front of the British Sections hidden amongst the rocks and thorn bushes... 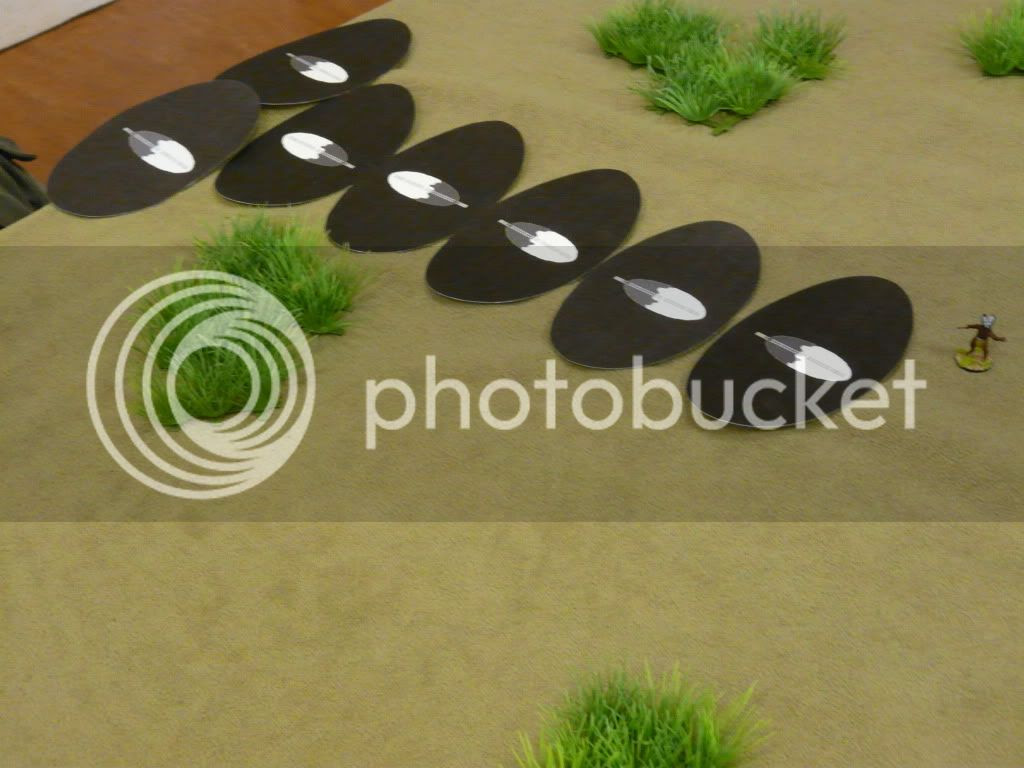 Turn 1 the Zulu player advances on Blind with neither side aware of the strengths that they were facing. 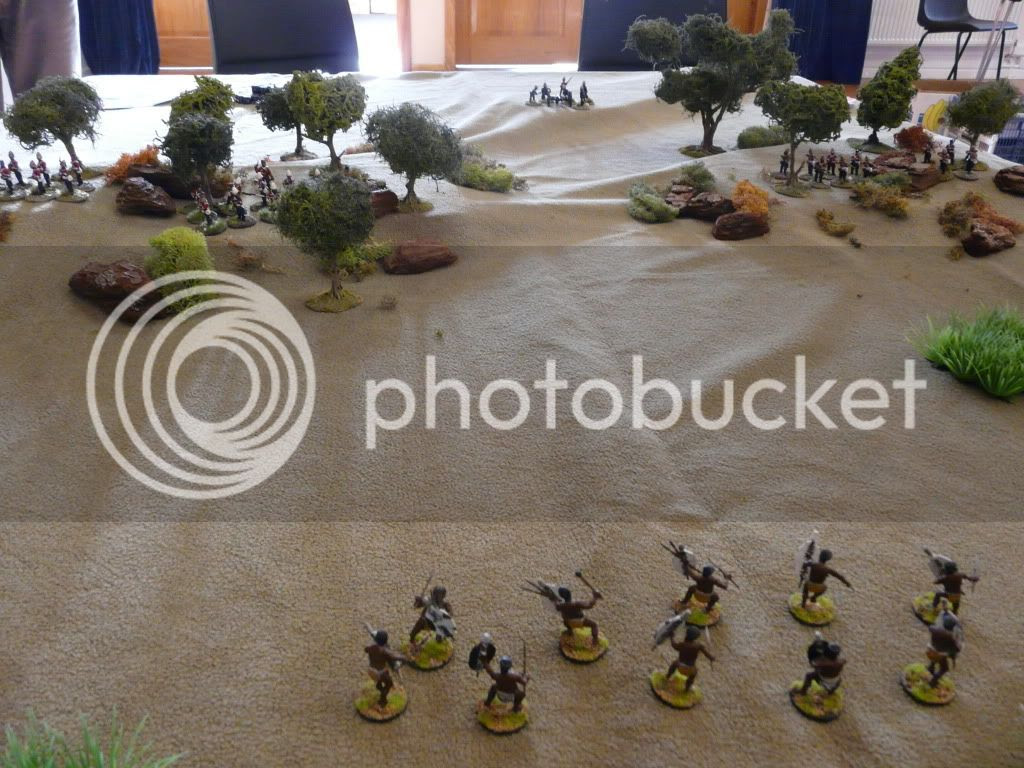 Turn 2 and the Zulu's first unit is spotted a small skirmish unit, the British all unmask as they pour a full platoon of fire into the skirmish unit including shells from the artillery piece, whilst casualties are lite, the shock is sufficent to force the Zulu's from the table.
It could be a long night for the Zulu's. 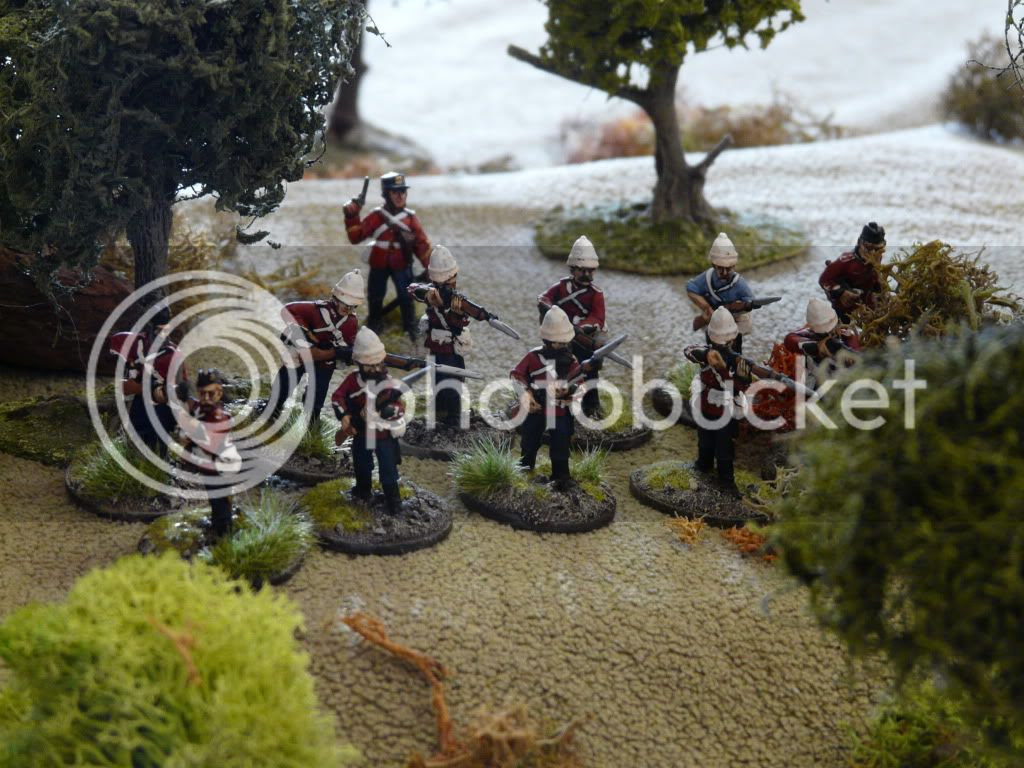 Henshaw and 2nd Section hidden amongst the under growth. The opening volley from Henshaw proved to be critical for the British. Henshaw rolling more 1's than 6's resulted in a low ammunition penalty which reduced his firing to short range and was to significantly reduce the British Fire power. (Mules needed... I think) 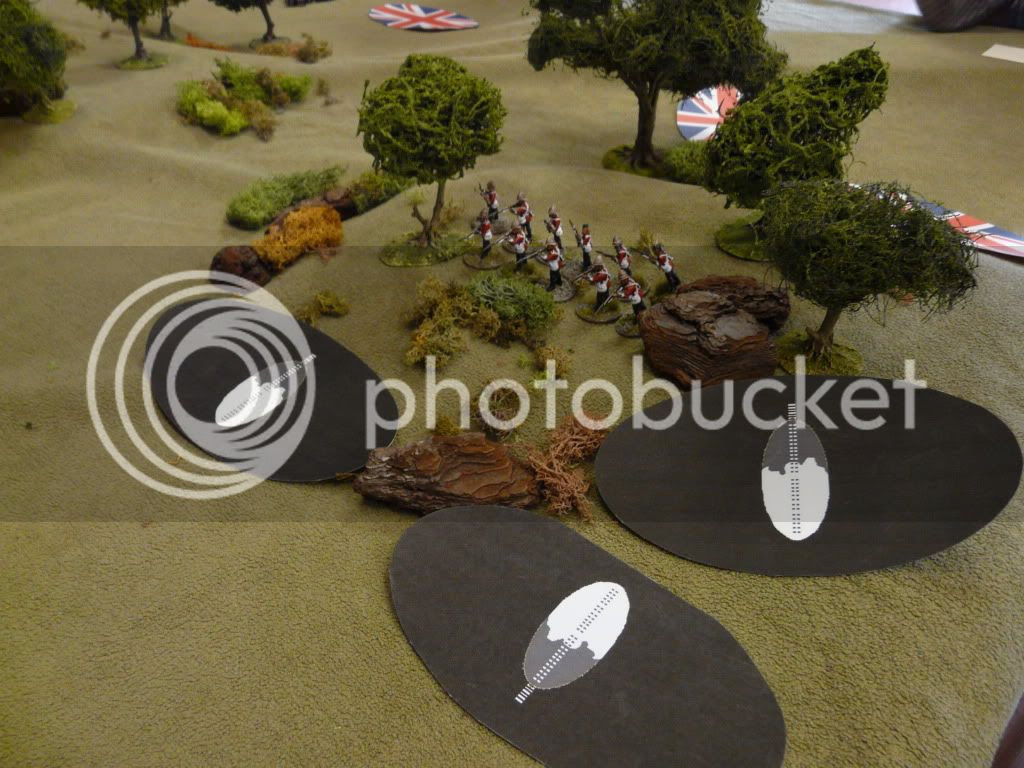 Turn 3, the Zulu player draws first and the Zulu blinds swing right, out of the arc of the Royal Artillery who are set back behind the British Rifle sections, the Zulu's drive towards 3rd section who are detached from the bulk of the British forces.
Moving on a blind at 3D6 +2 Pips per dice the Zulu Blinds tend to cause a small degree of panic in many British players as their speed can rapidly chance a situation on table.
The British player at this stage are still unaware of the full size of the Zulu force facing them as many of the blinds spotted turn out to be fake. 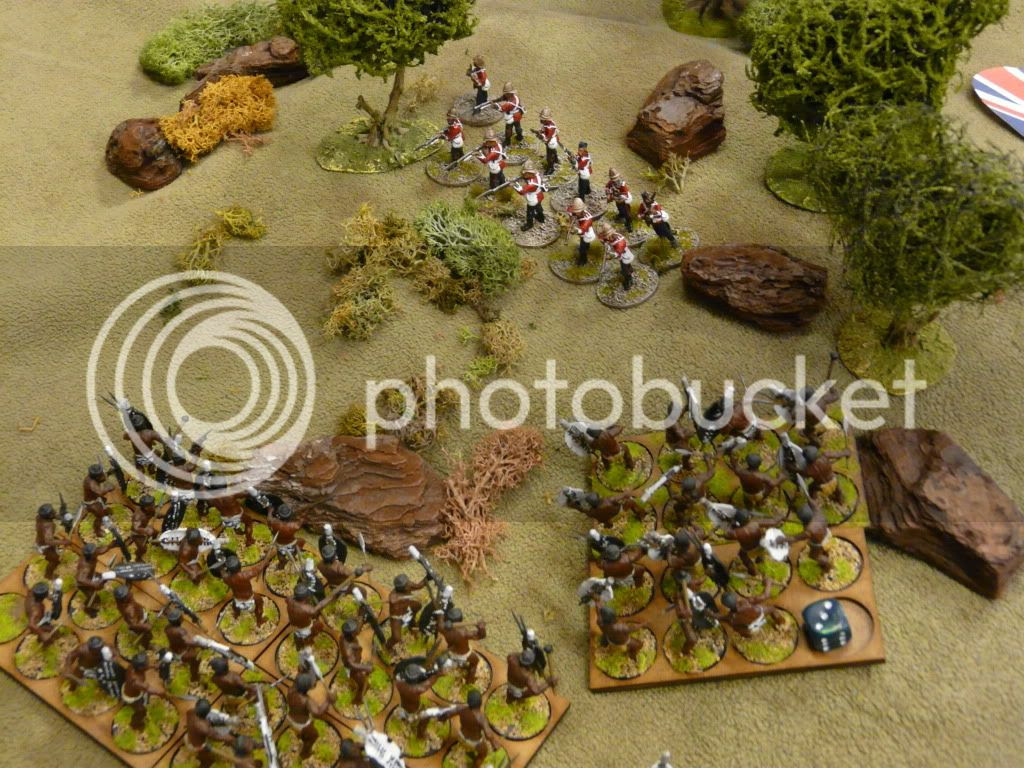 The Zulu are spotted by the experienced Sgt Taylor (Status III) who much to his horror is faced by the full Zulu War Party,  Tiffin comes around with the Bitish Section unable to move and the volley have limited impact on the advancing Zulu. 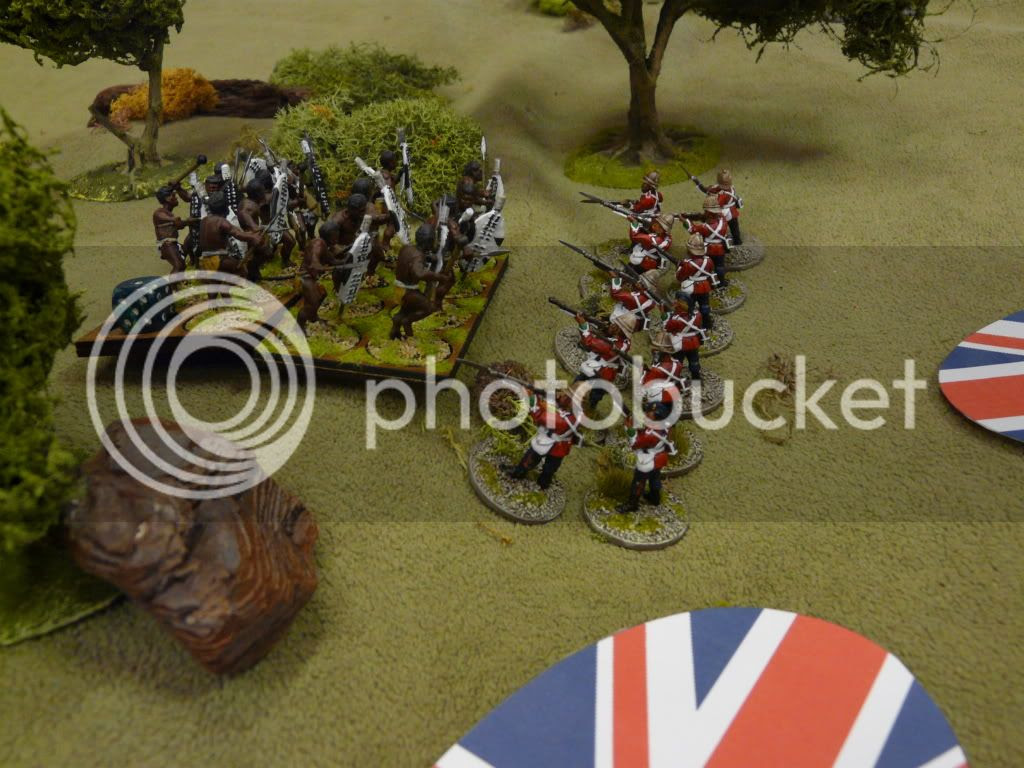 A break for the British, Sgt Taylor's card lands first and he is able to retire in reasonable order, the Zulu's crest the hill and engage with the British Section who are beaten back losing 6 men to the Zulu's 3..... (A bad day at the office for the Crown or just the luck of Zulu's again.....)
The Britsh are thrown back 9"'s leaving the Zulu's to butcher the wounded. 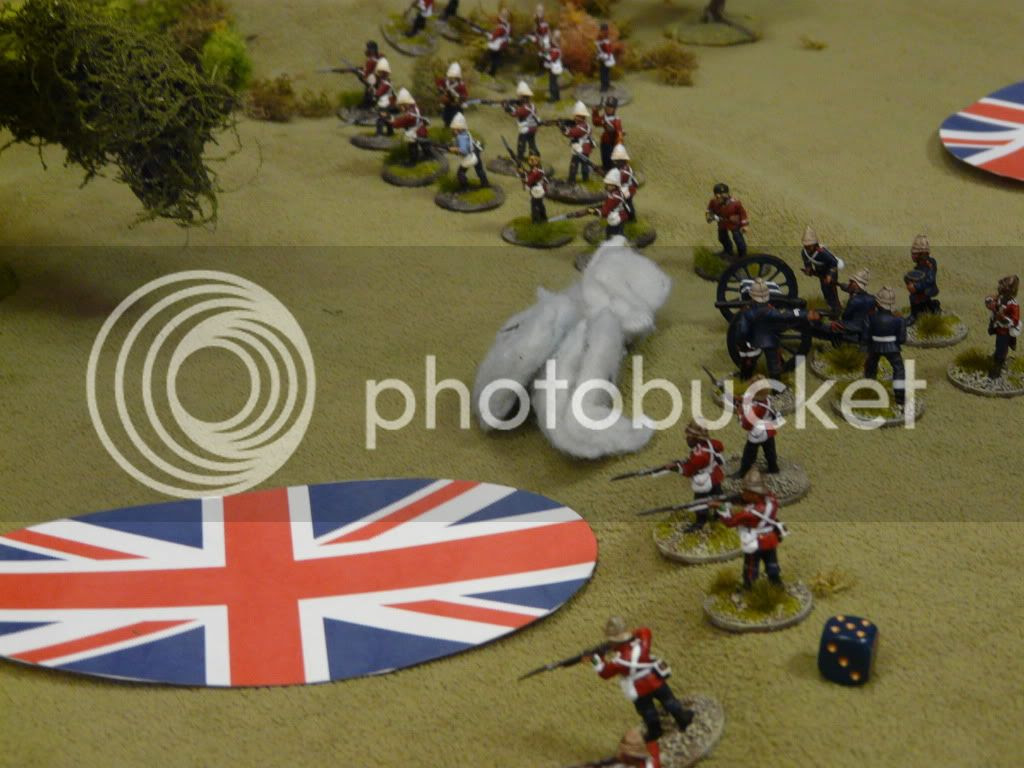 The British forces retire knowing the Zulu's are massing the other side of the ridge line. The RA fires only to be covered in a shroud of smoke which restricted their firing for a number of turns.
British blinds are thrown forwards in a vain attempt to slow the Zulu relief column fast approaching the ridge line. 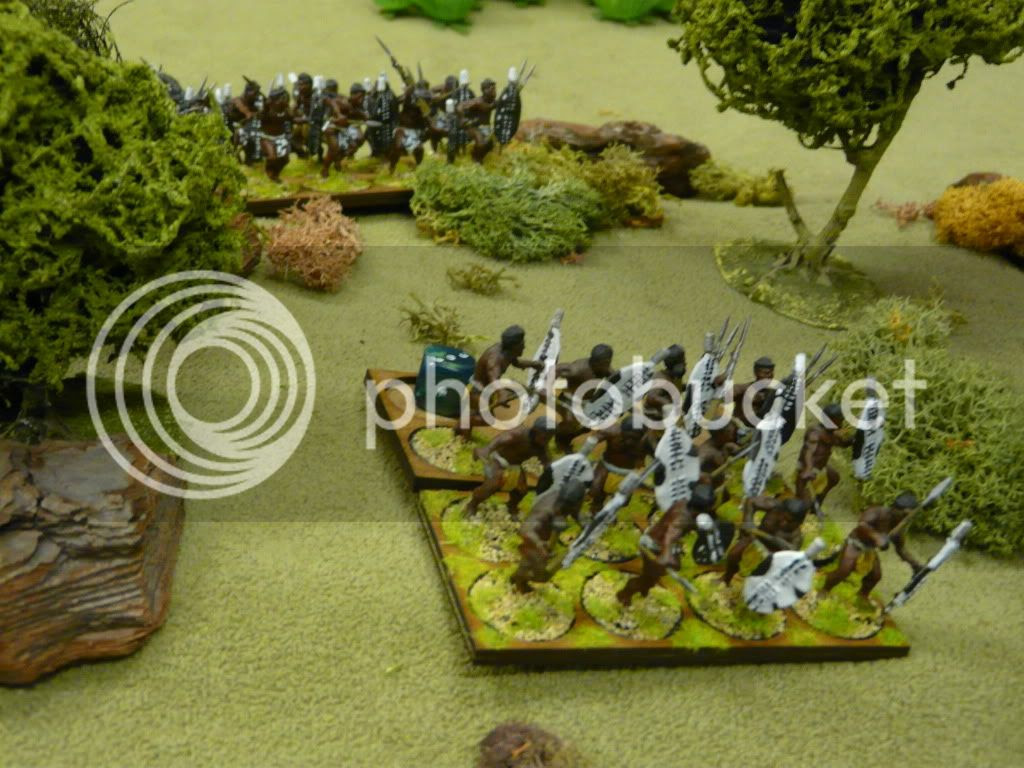 As the Zulu's massed the clocked ticked down for the British who retire off table having inflicted a mere 5 kills on the Zulu resulting in a loss on the night by 1 figure.....
If Henshaw is to win grace and favour in the British army he is going to have to do better than that.
Better Luck next time Henshaw...
GAME REPORT 3 Post Script

A reasonable roll on the Fixed Event table in Platoon Forward results in the Platoon being brought up to 2 short of fall strength.
With the British rolling 4+ pn a D6 they remain on the offisive dispite the set back above.

Next Up - Scenario F - Platoon Attack - Crossing the Drift.