Having played several games of Pike Shot & Zombies over recent weeks albeit with an Elizabethan flavour, the urge for bigger games has started to take over, having spent a number of nights working away without PC or paints, it gave me the perfect opportunity to attempt some in house rules merging GW's Lord of the Rings Rules with Pike Shot & Zombies.

PS&Z has some great mechanisms I love the idea of umpire driven arrival points and their random movement is a great way for the umpire to keep control, rather that the more random movement rules with All Things Zombie which has been a favourite of our club for quite a while. However trying to move PS&Z beyond 10 figures aside bogged the game down a little.

So here goes a first draft of Zombie rules for LOTR, For the most part, the rules are exactly the same as The Strategy Battle Game - The Lord of the Rings. 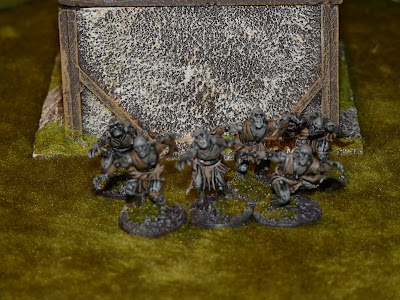 The stats for your basic undead figure is as follows.

Zombies move 4" and are worth 4 Points Value.
They have no Courage rating and will always fight to the death.


Terror
The Living Dead have no fear and rely upon tearing and biting attacks on the living, Any human wishing to charge a Zombie must test their courage or will stand in place racked by fear.
The Shambling Dead
The Living Dead aren't the most agile, so any model must roll two dice for Jump and Climb tests, selecting the lowest score as a result.

Devour
Should a Zombie defeat and kill a living character they and any victorious zombies will spend 1-3 Turns feeding on the body. Any Zombie with 12" will move to join the feast of flesh.

Any zombie characters without an active target will move on the random movement of a dice, for each group of undead roll 1D6 this number represents the move distance and number of zombies that my move from the group this turn.

The starting points for your undead forces. These will be hidden from the players at the start of every game and will be come active once a player comes within "X" inches of the plague pit. 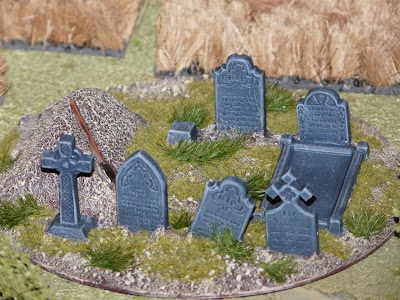 Plague Pits will generate 1D6 Zombie each turn, until the Zombie player reaches his point allocation or you run out of models....
Burial Mounds can be suppressed/closed by inflicting 3 wounds on the terrain item, the stats are as follows.

Each turn a player conducts one of the actions below roll the following dice if the distance reaches the location of the plague pit the pit will be activated and will being spitting out its evil content the following turn.

I would welcome any feed back as like many rule sets it will take a few more competitive games to iron out any kinks.