Laserburn - Imperial Commander - A real blast from the past....

It must be my age.
These has been a real hankering of late to go back to the early 1980's and swap the all glossly and background filled rule books for something far more simple. Back to the time when rule books were no more than black and white pamphlets, rule sets where you seem to paint loads of figures and removed loads in equal measure.

This nostalgic trip down memory lane took me back to Laserburn - Imperial Commander my first venture into miniature gaming, played on my mate Dave's living room floor, The Redemptionists badly painted in white, inspired somewhat by Mad Max 2 and the defenders of the fuel compound. The Dreaded Sun Gun killing everything that got within 10cm and the Black Guard I seem to recall who were painted in Black Gloss layered on so thick you could see little or no detail on the figures. 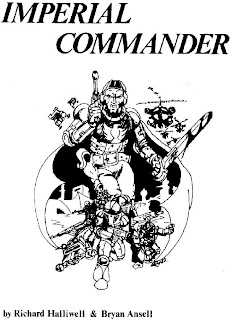 Over 30 years later and Laserburn is still available from the fine chaps at 15mm.co.uk,
The A5 booklet is now an A4 ring bound rule set.
The vehicles had been remastered in resin, boy that Lander was a serious piece of metal in it's day.
But little else has changed even down to having to cut out the Near Miss Counters and Weapon Templates yourself.


As tempted as I am to order a platoon of Power Armoured Troopers and Redemptionist Trikes, afterall I have more than £3.00 pocket money to spend now, I wondered whether I could get away with using the core rules for some of the modern Chechen stuff, I have struggled with finding a suitable rule set so far.
Plus with a few additions I could move the forces on 50 years or so for more sci-fi based encounters?

Imperial Commander is a set of rules for massed skirmishes of around 50 figures per side and half a dozen vehicles just the sort of size games I had in mind.

skimming over the rules at less than 20 pages, it does not take long. The following leap out.

The turn sequence is rather nibble for it's time with a dual move each turn for the active player.
First player
Both players fire.
First player takes a second move.
First player resolves any close combat
Test morale.
Pass over to the second player.
All very promising.
Who would have thought that 30 years later I would be back were I started...
Hopefully the painting has improved a touch.
Posted by Stuart S at 00:52