In an attempt to keep some focus during 2020, I planned on separating each month into the various projects planned or already underway. This month is the return to the Elizabethan Wars, a weird mix of historical, what if and fantasy.

I have a number of units already complete but had a number of others tucked away when the project slipped down the priority list, but the release of Warlords of Erewhon and the arrival of Fireforge Games plastics have given it a new lease of life.

The Witch is from Hasslefree Miniatures, she will be a useful addition to the forces of Darkness, which will see a number of reinforcements of the next couple of weeks. 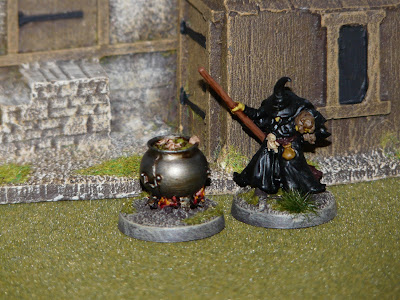 The cauldron was a resin freebie which has languishing in a draw for many a year.

In addition to the various projects this year I want to clear the cupboard of shame either attempting to paint, sell or dispose of all the 'Spares' that I have accumulated over the years it's suprising what you keep over 30 plus years of gaming. Half a blister pack, the poor sculpt or those one or two extras that were more than the rule set allowed you to field so they never got painted. I must have over a hundred of these poor souls that need bringing to the table or a new home.

Turning back to the Elizabethan I thought I would share the background to the project, whilst it is fantasy based, my preference is to some degree base it around the history of the period, so no Dragons, Orcs, Elves or Demons here.....


No one truly knows how the black days started, some blamed Phillip II and Catholic Spain, claiming him to be a necromancer summing forth demons on Protestant England others such as the Flagellants, thought at it was gods wraith brought down on them for the barbarity of recent times.

England and much of the known world had suffered with the Bubonic Plague or Black Death for many years. Victims of the Black Death would be sealed in their homes. The houses would be locked and bolted from the outside. The victims would not be allowed to leave and neither was anyone else allowed to enter.
Each house would be daubed with a red cross painted on the door in a vain attempt to heal the afflicted. Black Death victims were left rotting in their homes until weeks later when they were dragged out or the victims were thrown down from the upper story wrapped in any kind of improvised shroud on to the death cart where the death cart labourers would take them to Plague Pits.

This outbreak seemed different The Watchmen paid to watch the ‘plague houses’ and to hoist food up to the victims noticed that only the meat would be eaten, they heard moaning from the houses and a continuous scratching at the doors and windows as if the devil himself was trying to escape. Plague Pits that had been reopened from earlier outbreaks began to stir as if the ground could no longer contain the dead.

Queen Elizabeth was terrified of the disease and implemented quarantine measures to try to ensure the safety of herself and her courtiers. When the Black Death broke out in London, Queen Elizabeth I moved her court to Windsor Castle where she erected gallows and ordered that anyone coming from London was to be hanged.

There was rumour in court that Mary Queen of Scots was involved in the dark curse besetting the land, On the Queens orders Mary was put to death, her beheading was not without incident. As one executioner delivered the fatal blow he missed, the blade did not go cleanly through. Even after a second blow her head was not completely severed.
It took a third blow before the royal head was finally detached and even then her lips were moving for a quarter of an hour. Was this an incantation from the witch Queen?

Meanwhile in Spain, King Phillip II, plotted his revenge on heretical England, Phillip was a bigoted and ambitious man, he had tortured and executed his people in their thousands to ensure his subjects kept the one true faith. Having failed to secure her hand in marriage he had seen the rise of the Protestant Church which fanned his rage. Phillip’s spies brought him news of the spread of the Black Death and awakening of the once living.

In 1588 Phillip was ready to set in place his plans, the greatest ever Armada set sail to sweep Elizabeth from the throne and purge England of Protestants and the Black Death. The English navy largely unaware of the disaster inflicting the land savaged the Spanish fleet, those that made it through to the English coast, many were dashed against the rocks, although sufficient troops made landfall, they created Spanish enclaves and strongholds,

The Spanish led by the Duke of Palma and members of the veteran army of Flanders backed by Irish mercenaries set about expanding their area of operations disaffected English Catholics flocked to the Spaniards seeking protection from the ‘undone’. Death and destruction washed over the land with atrocities committed on both sides. The English and their trained bands held some towns, whilst the Spanish and their Catholic allies others, the streets of many Elizabethan towns were dark, narrow and dangerous and the plague victims began to break free from their sealed homes and hovels.
Posted by Stuart S at 17:53