After the recent Mexican Game, I thought I would look to get all of the Haitian mini's on to the table top, in order to make it fit we opted for Toussaint L'Ouverture's invasion of Santo Domingo in late 1800, Spanish forces bolstered by the French look to defend the plantation house from the invading Haitian army bolstered by freed slaves. 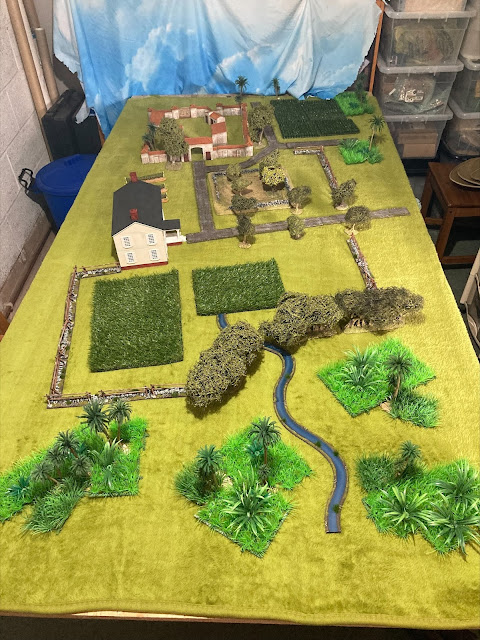 The table comprises the plantation grounds and house, the slave quarters and on the far right (bottom) the jungle hinterland. 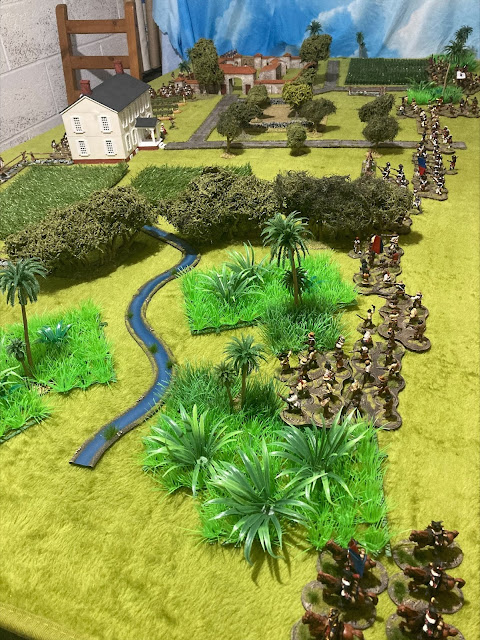 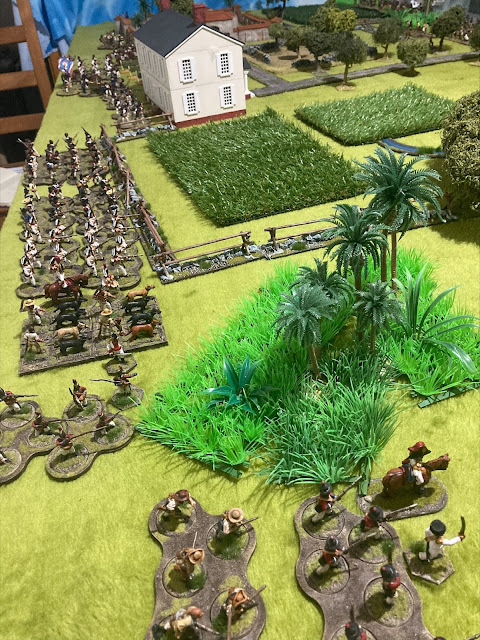 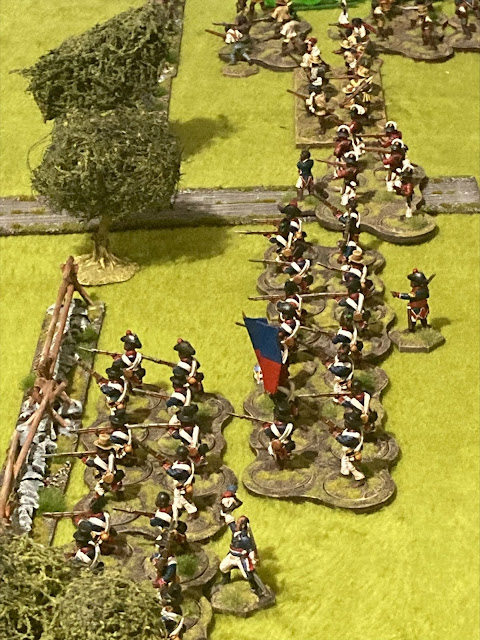 To speed up the game we dispensed with the Tiffin card on the first turn which allowed each side to form a suitable battle plan, each side had two Force Morale cards, Spanish, French, Haitian & Freed Slaves. This should allow players to marshal their resources a little better. 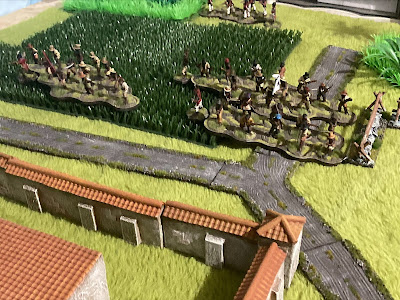 The opening turns and the band of slaves waste no time in rushing forwards towards the compound which houses the slave quarters and it's thick stone walls. 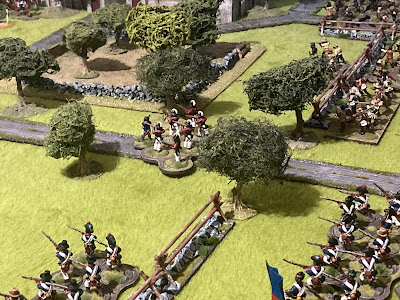 In the centre Haitian Line and Light troops enter the plantation grounds heading towards the main house. 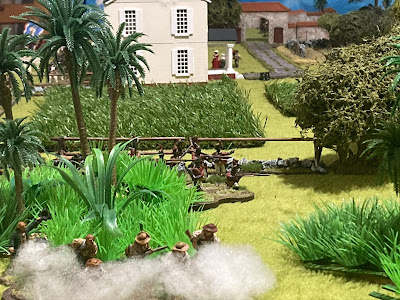 The Colonials are having a tough time of it, unable to get the required tokens they are under pressure on the right having to throw skirmish units forwards to stem the advancing invaders. The plantation employees fired off a volley as the Haitian's came on in force. 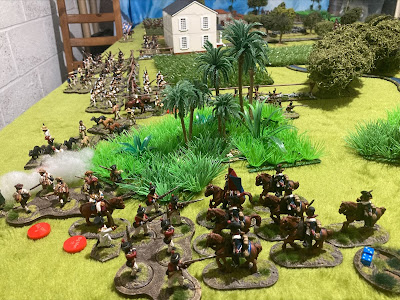 Haitian cavalry drove off the plantation workers and crashed into the Spanish light infantry who were unable to react but could not afford to give ground to the galloping cavalry. 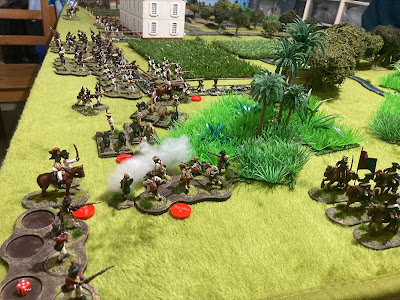 The Spanish are beaten back losing half their number, for the loss of only one rider. Not the best of starts for the defenders. 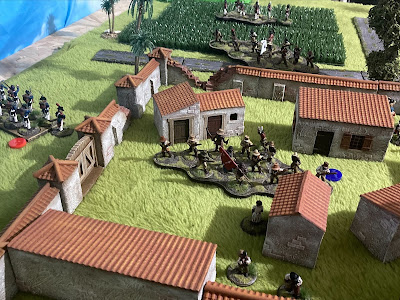 On the left flank the slaves had freed the enslaved plantation workers and held the compound cutting off the French militia who were holding the outside of the compound. The opening moves had not been kind on the French and Spanish as the Haitians held the initiative. 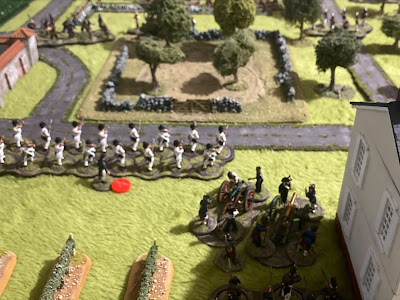 Whilst the flanks contracted, in the centre the French line advanced to counter the advancing slave forces in the orchard. Whilst the French cannon were rolled forwards to cover the plantation grounds. Would the guns tip the balance? 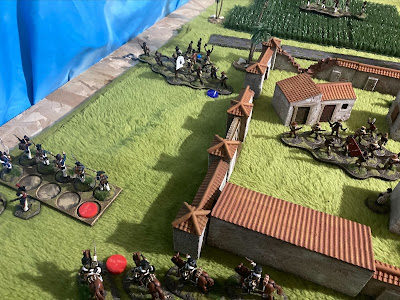 The French militia's luck ran out they formed to stand against the slaves who rushed in brandishing their big choppers taking chunks out of the untrained unit. The colonial cavalry were called forth to plug the gap. 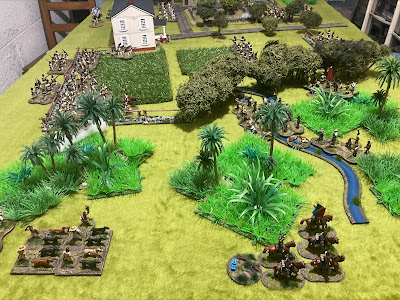 Things had stabilized on the right, the cavalry initial success had been blunted by multiple shock points and with the Spanish Dogs about to be let loose they beat a retreat, leaving the advance to the infantry who were now crossing the creek. 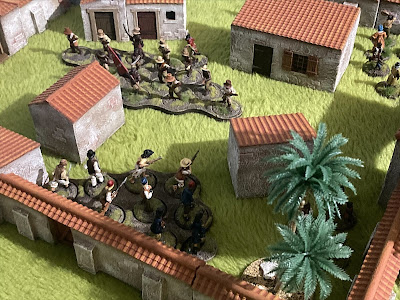 The French ordered one of their best units forward into the compound to halt the slaves hold up in the compound, the sailors were tough, tomahawks and aggressive if anyone could counter the rampaging slaves it would be them. 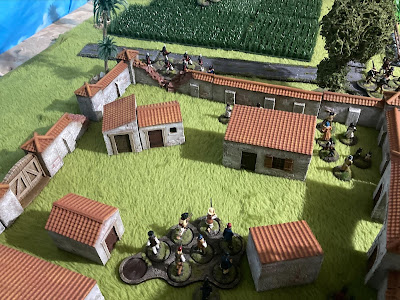 Great dice a string of 5's and 6's drove off the slaves, whilst the slaves were great if charging they were rather brittle if caught standing still and they were no match for the sailors. The compound was back in French control. 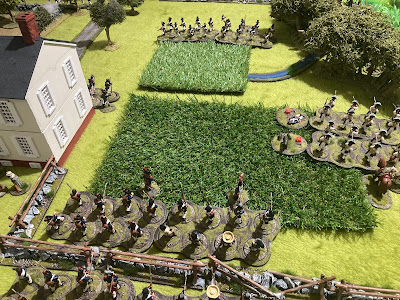 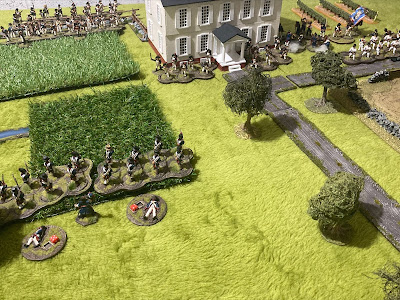 In the centre the Haitian regulars were having a tough time, the French had made slow progress crossing the fence into the grounds of the plantation, but with light infantry now in the main house and the French Cannon inflicting numerous shock points, it would be a tough ask to advance against odds of at least 4:1. 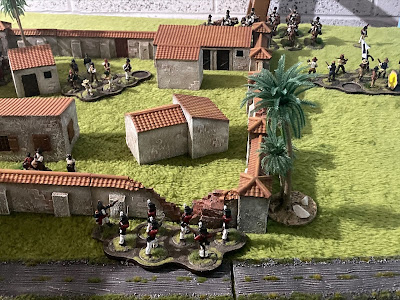 Was the encounter turning in favour of the French?
The compound was firmly in French hands although Haitian light infantry defended the breach, angry slaves had finished off the beaten militia but in a weakened state now faced off against the colonial dragoons. 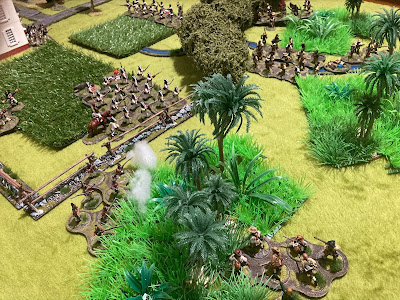 On the right the Spanish line were advancing towards the tree line to counter the slave musketeers who had crossed the creek in force. 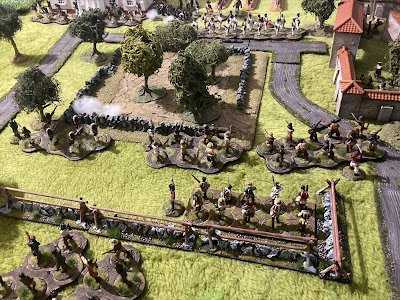 Was the orchard key?
The French line were primed and ready, but the slave army was massing for the final push that might break the French morale.
Time for a cuppa and then on for another round. 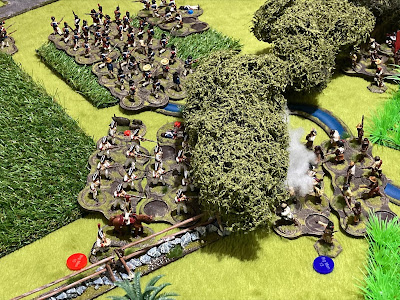 Buoyed by tea and biscuits the Colonial troops wasted no time in pushing the Haitian line from the planation grounds, they advanced on mass through the sugar field and wiping out the remaining section who looked to hold their ground. Whilst the Spaniards protected the flank from the freed slaves moving through the hinterland. 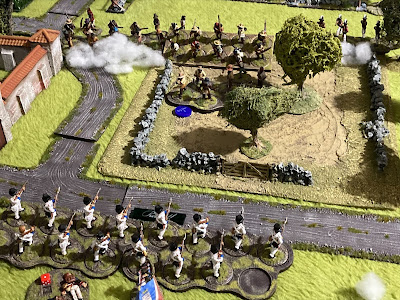 Whilst the French pressed on the right, the slaves made their move in the orchard, skirmishers and mass muskets rushed forwards to close with the French defenders. 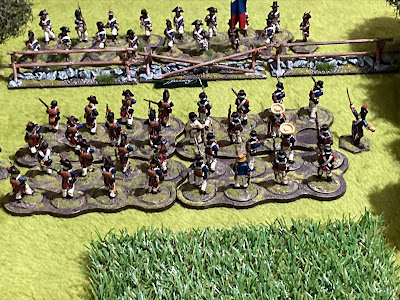 The mass ranks of French continued their advance, it seemed that nothing could stop them as the Haitian and slave forces were split in two. The solid mass unnerved the Haitian commander. 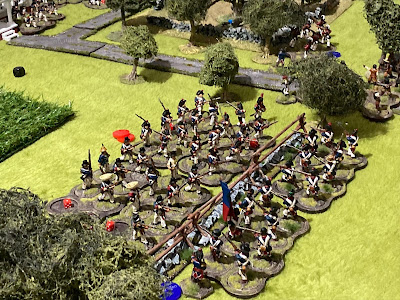 However the Haitians had not been idle and weeks of drill had prepared them for this very event, the low fence of stone and timber stalled the French long enough for the free people to first one good volley, which shook the Infantry as they closed on the Haitians. 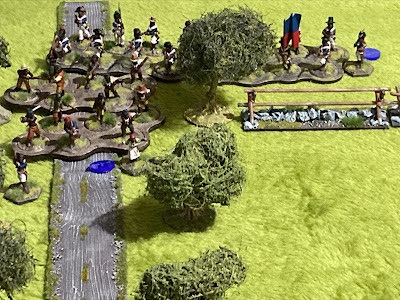 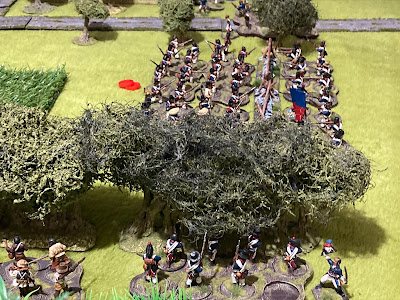 Plantation slaves rushed forwards and Haitian regulars caught the French battalion in the flank, the French were beaten and fell back in disarray, this victory would be sung about in camp fires for many years to come. 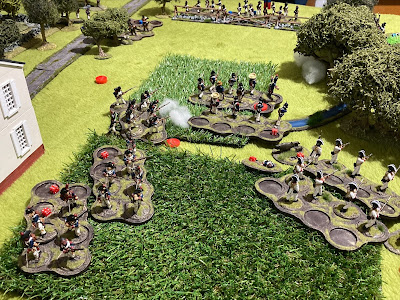 The French centre was broken, their force morale a single point from breaking, one more poor roll and they would be leaving the field. What a turn around by the free people. 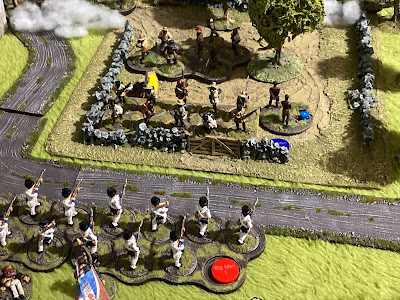 However the battle was down to the wire, the Haitian slave brigade was not having it their own way with only two force morale points left, if the slave forces could be broken this would be balance the battle and much like cricket could end in a draw after a bruising encounter. 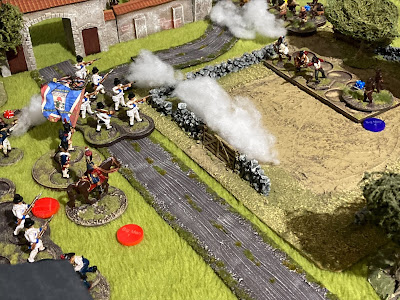 The French charged led by the General throwing back the slave militia who had lined the orchard wall, the slave brigade's morale fell by a further point, victory was within the grasp of the French however the French colonial battalion was in poor shape and a ragged round of musket fire from the remaining skirmishers broken the battalion and the French force morale.
What a great game.....
Lots of figures on the table and two force morale cards gave a good balance, at no point was their more than 2 force morale points between the forces.
The battle swung back and forth just what you want for a big battle....
Posted by Stuart S at 21:53