Attack on the Camp - Kings of Bronze #6

The final outing in the linked campaign see's Overseer Huharmati's encamped on the way back to the Hittite homeland, when they are attacked by an Egyptian force. 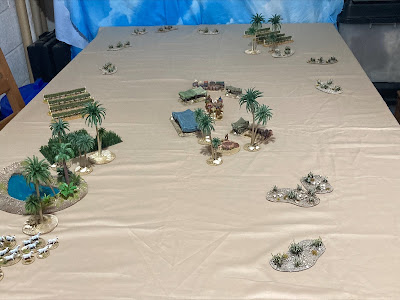 In this encounter an actual human in charge of the Hittite defenders, with the Egyptian forces entering on two random table edges and the content of each blind unknown. 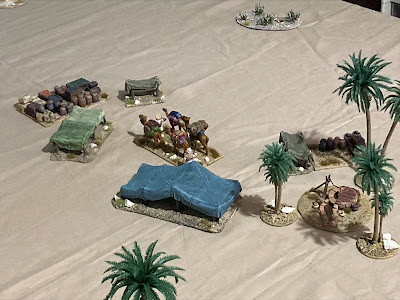 The Hittite command have to escort the camel train from the centre of the table, but can only set off once they have amassed 20 task points (1d6 per turn on the commanders activation.) 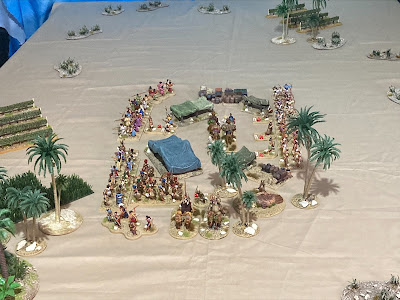 The Hittite deployment, Overseer Huharmati had no idea where the raiders would come from so covered all 4 sides of the camp selecting forces similar to those from previous encounters. The Egyptian blinds matched the force make up with a +1 for each force type. 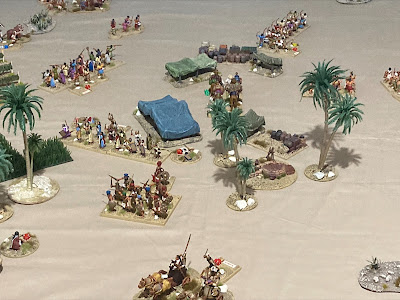 The Egyptians rolled and they appeared on the centre and top left flank of the camp. Surprisingly the Hittite's pushed out on all sides to meet the threat. The only control I had was what flavour to pick when a blind came out, I opted for light troops at the outset saving the heavier forces for the far flank once I knew which direction the Hittites might take. 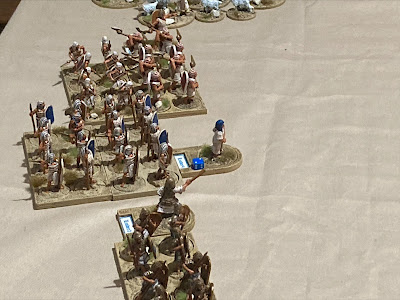 A good run of blinds and some high rolls revealed a number of blocks of spear units, it looked like the southern door would be shut firm. 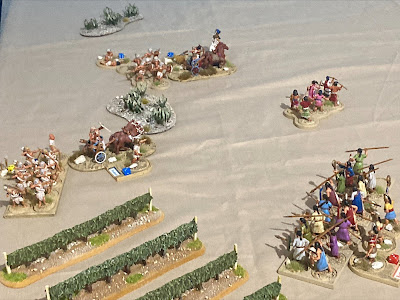 Meanwhile at the northern end, I had less luck. The heavier blinds were failing to turn up which meant the fast moving chariot forces was fewer and lighter than I had hoped. Coupled with that the Hittite Spear Block was advancing on the recently deployed archer unit. 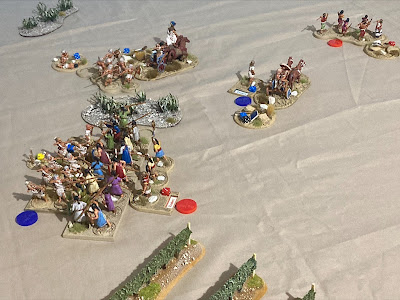 The archers let off a round but they were unable to stop the advancing spears who forced them back and off the table. 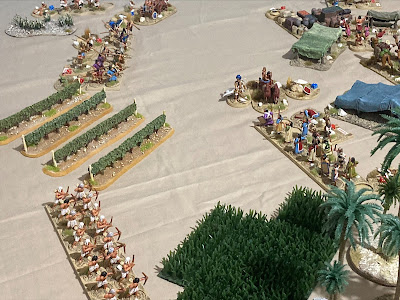 Another blind and this time an archer formation, which firers a cloud of arrows into the defenders of the camp, the Egyptian medium chariot had broken through the defenders line, but the camp was cluttered and the mass archer formations would be tough to beat especially as they had closed ranks. The Egyptian command chariot ploughed into the spear formation, but was unable to break the line and was bounced back. 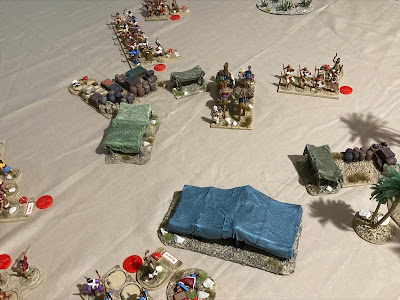 The camels were free and packed and were heading north. 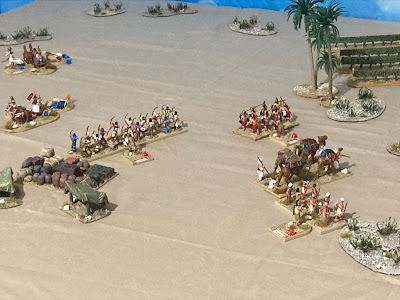 As the Egyptian chariots reorganised Overseer Huharmati ordered his own archers to target the chariots on the far side of the camp, with excessive shock they would be of limited threat to the camel train. 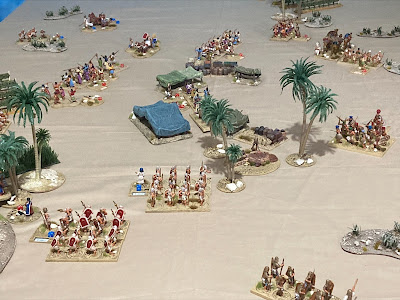 The main Egyptian spear blocks were finally entering the fight, but the camp was empty and the Hittites were safely heading North.
Victory to the Hittites....
That was fun set of linked games, despite the overwhelming victory for the Hittites every game had a number of key moments that could have swung the games.
Playing through over a number of weeks have me the appropriate nudge to get some of the old lead cleared and on the table even in this game the new chariot failed to make the table.
Now for a new campaign and some more extra's from the lead pile....
Posted by Stuart S at 09:09