The Wyverns rolled out "The Men Who Would be Kings" at the Club house a few weeks ago which gave me a great excuse to dust off the Boxers. 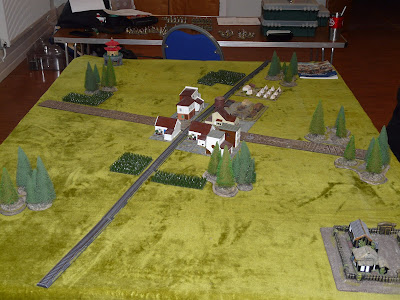 We added in the officer traits but to many of the rolls dished out poor quality officers on both sides. The plan was to get the toys on the table to run through the rules to ensure they gave a good evenings entertainment.
The scenario is your typical colonial adventure, the Europeans are holed up in the railway station waiting for Seymour to arrive and whisk them to safety, while the Boxers look to burn the place to the ground... 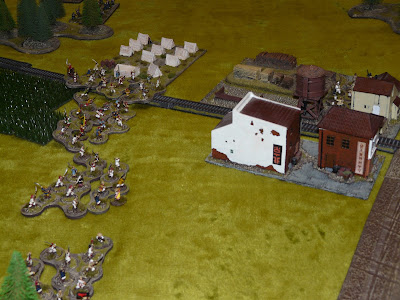 The Boxers as tribal units are cheap and out number the Europeans by at least 3:1, they sweep forward out flanking the US Marines and close in on the left flank of the small out post. 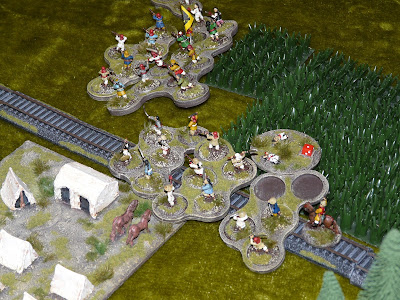 The tents are over run, cooking pots and belongings destroyed as the Boxers rush up the railway line looking to drive the foreign barbarians from their land. 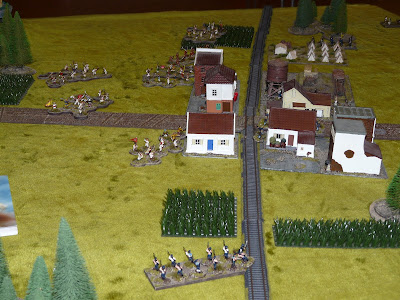 However reinforcents are on their way in the shape of a Russian Sailor detachment, who pour long range fire into the Boxers, a number are killed but more importantly Boxer units were becoming pinned, poor leadership and poor dice rolls force some of the Boxers away from the cluster of buildings. 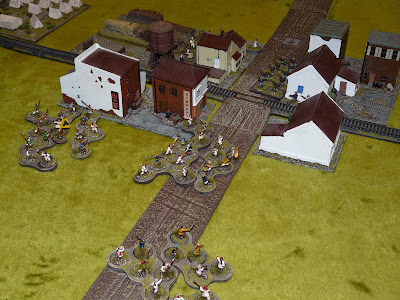 The Boxers close in again but are caught in a cross fire between the US marines and Russian Sailors and again unit after unit becomes pinned and falls back. 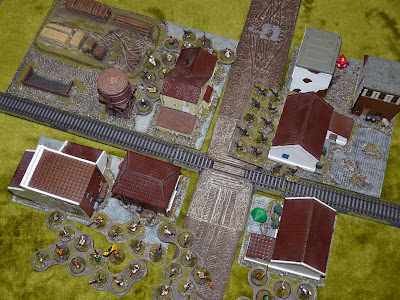 The Chinese start to torch the buildings looking to burn them to the ground but all the time they are slowly being reduced in number by the European rifle fire. 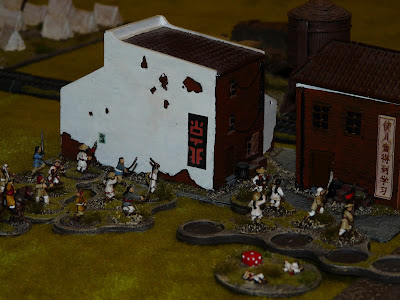 Boxer units start to break and fall back unable to destroy the buildings on the left of the encampment, despite contacting them on several occasions they were simply not numerous enough having seen their number be reduced by the Russians and Amercians. 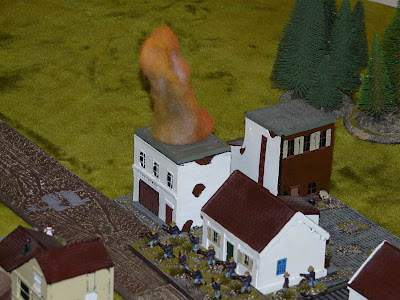 Finally a minor success Chinese Artillery having done nothing all game gains a hit on the right hand building bring it crashing to the ground, but it is to little to late and the Boxers have be defeated as their losses were just to great to win the day.

A great encouter fought to a conclusion in under 2 hours... Despite the numbers of Boxers their poor officers and poor Leadership was their undoing against the regulars with their automatic fire order.
TMWWBK gave a really well balanced feel to the encounter and was quick and easy for everyone to pick up in 2-3 turns.
Next time more conventional forces....
Posted by Stuart S at 14:47

Email ThisBlogThis!Share to TwitterShare to FacebookShare to Pinterest
Labels: AAR's, Boxer Rebellion, Colonial Warfare, The Men Who Would be Kings, Wyvern Wargamers.