6mm Pony Wars - The start of the 7th Cavalry.

It seems like ages since I actually finished a unit, but finally the first of the Pony Wars Figures start to take to the field.

Ok not quite fighting men but at least the horses for elements of the 7th Cavalry. Possibly the weirdest place start for a project. 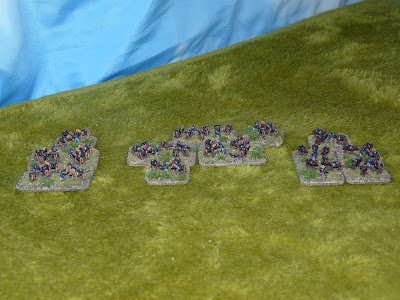 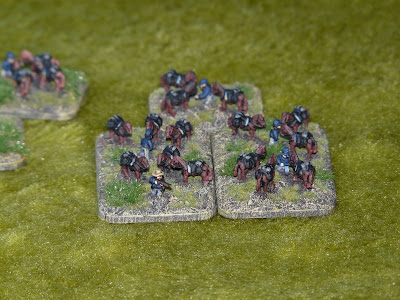 I was slightly nervous about 6mm having largely gamed in 28mm - Mirco tanks don't count as they are all green. The temptation was to paint the detail especially given the excellent castings from Baccus but as a good friend told me you are typically 3ft from the mini's so you can afford to be far more liberal with the detail.
I toyed with the idea of painting them on the sprues but in the end opted to base them first and then add the detail by adding in blocks of colour, horse blankets, neckerchief's flesh etc. It did mean that their were the occasional hard to reach area, but better that than ruining some of the painted mini's by adding in the base mix and dry brushing. 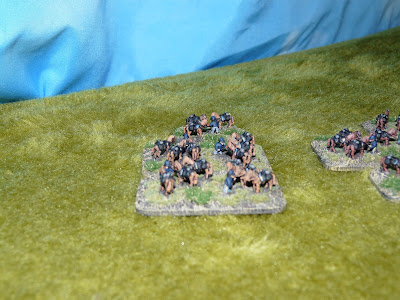 The plan is to use them for an adapted version of Sharp practice or the soon to be re-released Pony Wars Rules, basing the units on a single base will help with movement and 6mm will give me plenty of room for rolling plains on an 8ft by 4ft table with a mass of warriors against a beleaguered command.

The US cavalry whilst having superior fire power will be encumbered by a long tail behind the firing unit, horse holders, pack mules etc, this should give the cavalry commander a real challenge on the table top. 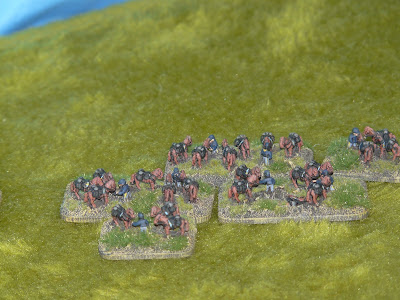 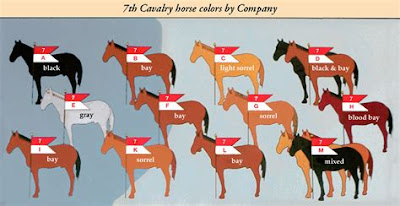 Lot's to do in the weeks ahead but this is a good start to get my eye in.
Posted by Stuart S at 15:02